Your old pal Barbecue was down for a few days with a sinus infection but just like George Costanza after eating that mango, "I'm back, baby!" Today's I'm getting ready to start another mini marathon of reviews and this time I'm checking out some of the new releases from the Masters of the Universe: Revelation inspired Masterverse. To kick off looking at series 2 we've got Beast Man in the house. In MOTU: Revelation most of the characters have (at least) two looks: One from before the disappearance of magic from Eternia and another from afterwards. Mattel has been mixing up which looks they offer and Beast Man gets his look from after the death of Skeletor when he's off roaming around on his own for years. It's really cool to see Beast Man with a very unique sculpt like this as it makes him extremely menacing and feral looking, kind of like the 200x version of the character. Let's take a look at Beast Man after the break and see if he's truly as fierce as he looks.... 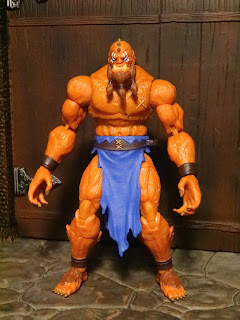 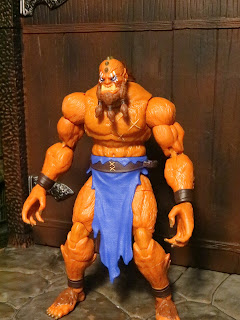 The Positives:
* Beast Man has his own unique sculpt in the line and I really can't see it being fully reused for anyone else. His body is suitably hairy and muscular, just like you'd expect, and he's covered with scars. Rather than the classic furry trunks and furry collar this Beast Man is running around in just a long loin cloth. It's pretty cool looking but fair warning: He's wearing nothing underneath! Beast Man has gone commando! His body has some scars on it which look really cool and definitely add some more character to the sculpt. I've heard speculation that his look was intended to mimic the way so many vintage MOTU figures are missing armor and have play wear, but I haven't seen or heard anything official. It's an interesting thought, though. 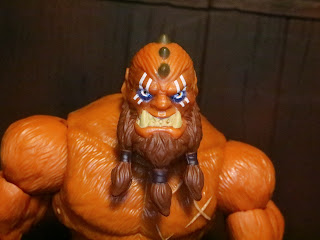 * The headsculpt is really cool. I love the work on his face. Those angry eyes, the cool face paint, and the braided beard is just excellent. There's so much personality here. I'm also loving the pronounced ridges on his head. They actually look more like horns than the simple ridges of past Beast Man figures. 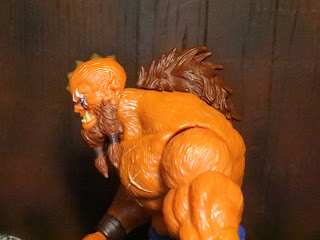 * Here's a glance at Beast Man from the side so you can see how he's built to look like he's hunched over. He also has a really cool mane of fur on his back that just adds to his appearance. 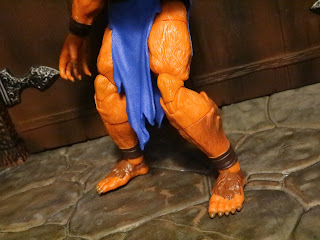 * Beast Man's feet and legs are also really hairy and wild looking with lots of unique detail. He really does look fantastic. 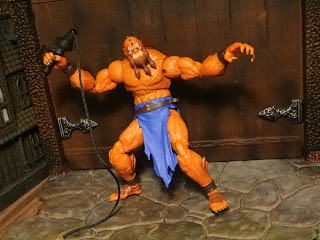 * The articulation is really good on this series. The figures are solidly constructed with plenty of useful joints with a great range of motion. These are some of the best constructed action figures Mattel has made. 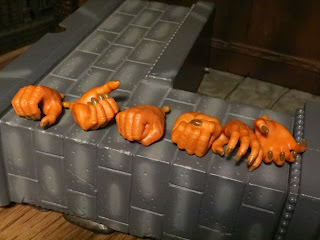 * Beast Man's extra hands are really fun and he definitely can make good use of them to add more character to his wild expressions. He has a pair of standard grips for holding his whip, a pair of fists for pummeling the heroes, and a pair of claws for some serious fighting. 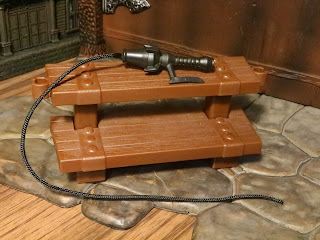 * Beast Man's whip is quite cool. It has a fantastic and fierce handle and the whip itself is made of string like the vintage toy. I like it. 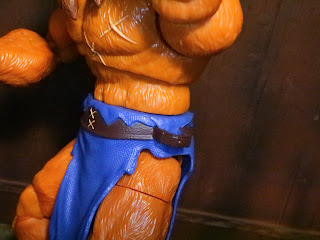 The Negatives:
* So it's really cool that Beast Man has a loop on his belt for the whip but how does it work? There's no way to really put the handle in, just the hilt, and it just doesn't look good stored there. 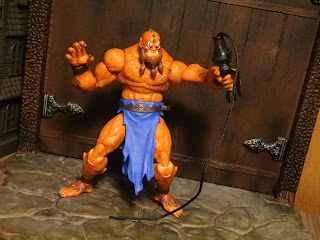 I really like this Beast Man. Seriously, he turned out wonderfully and is really a very cool, very vicious version of Beast Man. He has a great sculpt, lots of cool hands, excellent articulation, and he's just lots of fun to play with. I'm really hoping that Masterverse's MOTU: Revelation themed offerings keep coming as there are plenty of characters from the series I want. Beast Man is a Great and a 1/2 figure and one of the best versions of Skeletor's original lackey made in action figure form.