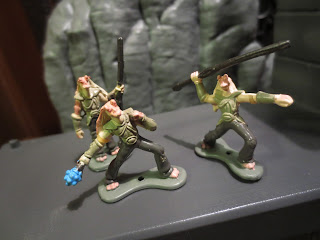 Here's the last set in my Micro Machines micro review series of the first five collection for the figure and vehicle sets from Star Wars: Episode I. The fifth set is an army builder pack, similar to the sets which Galoob released for their Original Trilogy collection that features small armies such as Stormtroopers, Sand People, Jawas, Ewoks, and Echo Base Troopers. The Gungans were a pretty cool part of Episode I (maybe not Jar Jar himself, but I think the Gungans were pretty awesome overall) and their land battle is still a pretty exciting scene to watch. Ready to interact some crazy Gungan battles out on your coffee table? Then pick up this set. Or, you know, just read about it first so you can make an educated decision. Join me for more Gungan goodness after the break... 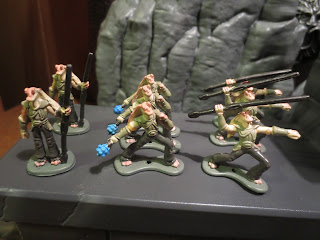 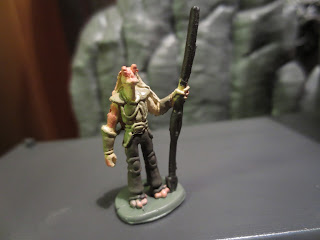 * The first Gungan is a standard Otolla Gungan standing at attention and wielding a spear. These are some pretty cool guard Gungans and they'd look great hanging around the Naboo Temple Ruins playset. These guys all have little holes in the base so they can attach to the pegs on the Episode I playsets. 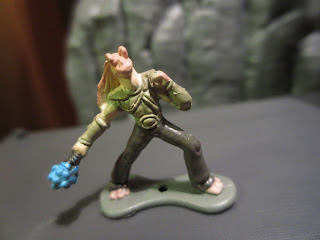 * The booma wielding Gungans have their right arms extended backwards to toss a Gungan booma grenade with the assistance of an atlatl. Again, the detail and paintwork is pretty spot on for such a tiny figure and these guys look awesome as part of a Gungan army. This guy might be my favorite from the set. 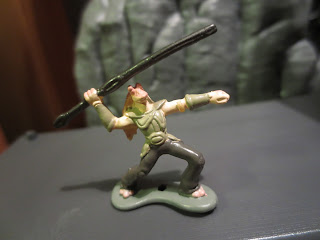 * The third and final Gungan in this set is also preparing for battle. He's getting ready to toss a deadly spear at some unlucky Trade Federation Battle Droid. I love the pose here as this Gungan is perfectly set for battle. Just really impressive stuff! 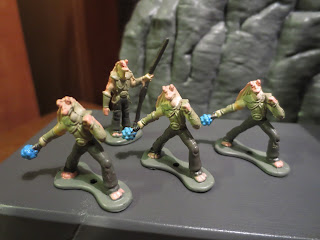 This isn't a bad set at all. While you get some duplicates, that's to be expected with an army-building set. All three different sculpts here are really good and they look great. I've always loved Galoob's figure sets and  hope Hasbro attempts these as well. That's one of the benefits of Micro Machines: Building an army should be simple, easy, and fairly inexpensive. This is a Great and a 1/2 set and well worth looking into for Micro Machines enthusiasts.


If you're interested in more Micro Machine madness, check out my other reviews: