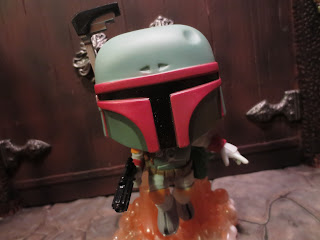 I've been subscribed to the Smuggler's Bounty since the first box back in November 2015 (before The Force Awakens was even released!) but I unfortunately had to change a debit card number at some point and missed out on the first shipping of the Bounty Hunter themed box. I managed to get things rectified, though, and now I have some really cool Bounty Hunter themed swag along with two cool exclusive Star Wars POP!s from Funko. Today I'm looking at the POP! Boba Fett #102 which is exclusive to this box and features Boba Fett flying around with his jet-pack in his more colorful Jedi outfit. Funko has released at one other Boba Fett figure (and a white Prototype Armor variant) but it's in a more neutral pose. This guy is rocking, though. Seriously, if you asked me to pick my five favorite Star Wars characters, Boba Fett is easily going to be in the upper part of that short list (so is Admiral Ackbar, BTW) so this guy was a pretty sweet surprise. Ready for a closer look at the Smuggler's Bounty Exclusive Boba Fett #102? Then join me after the break... 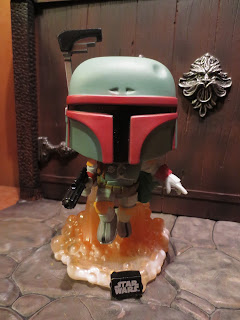 Non-Scalper Price: $25 dollars as part of a set which also included an IG-88 POP!, a Boba Fett patch, a Bossk pin, and a cool T-shirt with the Empire bounty hunters on it. 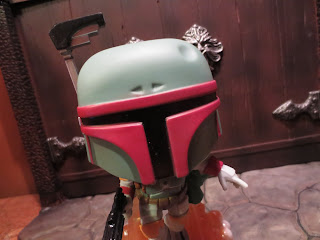 * Boba Fett definitely looks like Boba Fett. I think the helmet might be a bit wider than usual but that very well could be just part of the POP! aesthetic. The colors are good and the details are nicely accurate for a stylized vinyl. He even has the grate on the back of his helmet and the rangefinder. Is there any costume in Star Wars cooler than the Fett Man's? 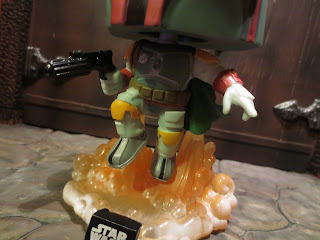 * Not only does Fett's outfit look incredible (there really is a nice amount of detail and some great paintwork here for a stylized vinyl) but he's actually really dynamically posed, too. He's way more exciting than most other POP! figures. His cool over the shoulder cape is even flying out in the breeze a bit. Wicked! 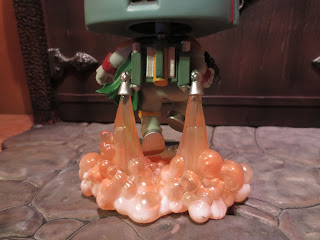 * Does that exhaust from his jet-pack look awesome or what? It totally reminds me of the 2003 Boba Fett figure from Phase II of the Saga Collection and that's a good thing. The translucent plastic flames are given a nice white spray over them that brings them to life. Looking at this figure, I'm completely reminded why half of my questions in 6th grade science class were about jet-packs. 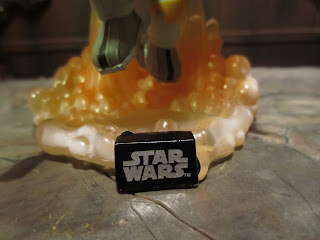 * While the other Star Wars POP! figures have removable bases, Boba Fett doesn't because he's effectively "standing" on the flames created by his jet-pack. To give him a Uniform look Funko did add the Star Wars logo to the front, which isn't a huge problem but it looks kind of out of place. If you're someone who removes your Star Wars POP!s to make them look more uniform with other POP! lines, this might irritate you. 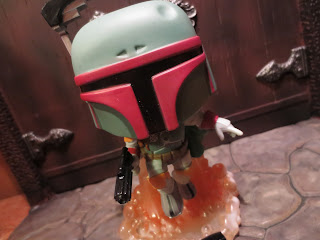 Comparing this other POP! figures I own and have seen, this is definitely one of my favorites. I'd honestly say that this guy is pretty Epic, maybe even more so than my beloved fuzzy Chewie from January's Resistance themes box. Whether you collect Boba Fett stuff, just want to class up your office or living room, or simply love good POP!s, this guy is worth trying to snag. If you're a member of Smuggler's Bounty you can actually go back and order older boxes at a discounted rate while supplies last and, at this point, that might be your best bet to get this guy at a decent price.

I have definitely reviewed a couple other Boba Fett toys on the site, including the Black Series Boba Fett, the Walgreen's exclusive Boba Fett (Prototype Armor), and both the standard Hero Mashers Boba Fett and the Han Solo Vs. Boba Fett two-pack. I've reviewed a few other Star Wars POP!, too, including: