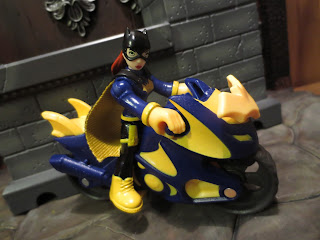 Today I've got a new Batgirl review for you and this time it's Batgirl from Fisher-Price's insanely popular DC Super Friends Imaginext sub-line! This figure first was shown off shortly before Toy Fair 2016 and soon made it's way to retailers. Well, some retailers anyways, as this has been a pretty tough toy to find! Imaginext seems to be really popular with both kids and parents as well as general toy collectors so they can be rather difficult to find. I've been looking for Batgirl for months and just found her about two weeks ago on Fisher-Price's online store. I actually ordered two of her: One for my Batgirl collection and one for my two year old who loves Imaginext, too! She was really excited that we both have Batgirl figures! Fisher-Price has been slowly releasing a variety of DC characters and, given their focus on Batman, Batgirl definitely seemed  like a long overdue character. Ready to look at this great toy a bit more closely? Then join me after the break... 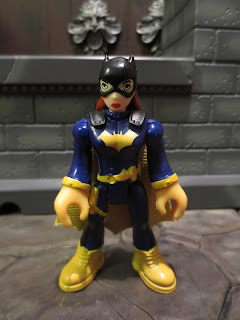 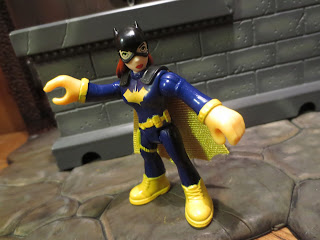 * Imaginext toys are really sturdy little figures that have an appealing look and are tons of fun to play with. They stand really easily (thanks to enlarged feet) and they're really great for toddlers just getting into action figures. Babs has the same articulation you'd expect from any other Imaginext figure except that her longer hair limits the swivel joint of her neck a bit. Otherwise, she's read for some great crime-fighting adventures! 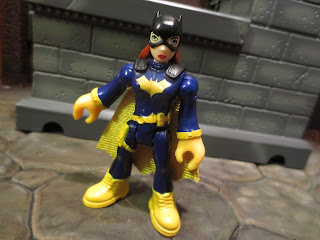 * One of the things I love most about the design of this figure is that her costume is inspired by the Batgirl of Burnside look from Babs Tarr and Cameron Stewart. It's a great costume design that Mattel also seems inspired by in their DC Super Hero Girls line. The purple and yellow look great together and I love the actual fabric cape and the attachment straps on her shoulders. 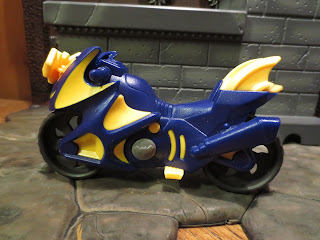 * Since this set is called "Batgirl & Cycle" would it really surprise you to know that a motorcycle is included? Babs gets this awesome purple and yellow motorcycle to help her zoom around Gotham. It kind of resembles a bat from the front (the headlights look like eyes) and it has nice, thick tires so it can stand up without needng to be leaned against something. 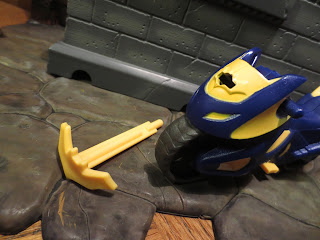 * If you push the grey bat emblem on the side of the motorcycle a yellow bat-shaped missile will launch from the front. This is a pretty fun feature that works great. I'm not always the biggest fan of missile launchers on toys (they were just really overdone throughout the 1990s) but this one looks find before it's fired and fires with a decent amount of force. 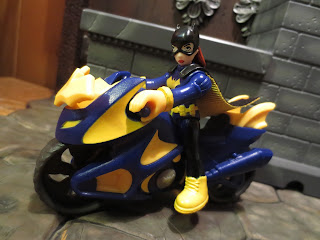 * Babs looks fantastic on her motorcycle, doesn't she? She can grip the handlebars well (they're not at all fragile) and fits perfectly right over the seat. Her cape looks awesome blowing behind her, too! This really is an impressive little set. 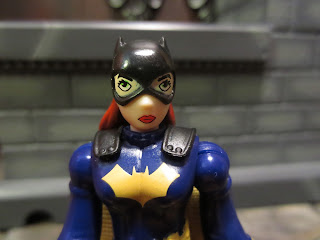 * I'm not a fan of the eyes here. Something about them just looks a bit off, possibly as if they're just spaced too far apart. I'm also not digging the blank expression. Give her a grin or a smirk or a grimace or something! The other Imaginext figures tend to have great expressions and I'd love to see something a bit more charming here. 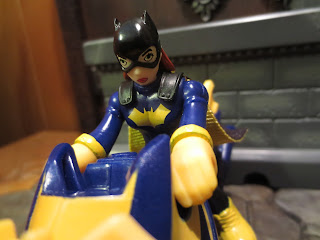 Considering that this is a $6 dollar toy, I'm incredibly impressed. This is a Great Imaginext figure and vehicle set that is definitely worth hunting down. You really get a lot of your bang for your buck here and it's nice to have a Batgirl added in to the DC roster. The figure looks pretty impressive, the motorcycle is a fun accessory, and you get to add Barbara to the Imaginext Bat-family. Don't give in to the evil scalpers yet, though: The DC Imaginext stuff tends to be re-released quite often so check your stores diligently, look online at Fisher-Price's site, and link up with online Imaginext communities (I like the Imaginext Generation) and you should be able to locate a Batgirl for your own collection!


If you just can't get enough of Batgirl, check out a number of other Batgirl statues, toys, and action figures I've reviewed in my virtual Batgirl museum!

If you're interested in more DC Imaginext figures, check out my reviews of:

If you're interested in more Imaginext reviewed in general, check out my reviews of: