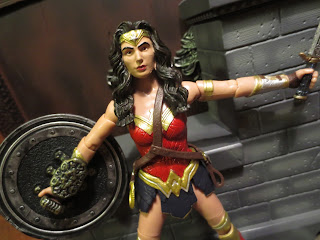 Today I'm looking at Wonder Woman from Mattel's DC Comics Multiverse: Batman v. Superman line. That's a mouthful, am I right? Anyways, if you've been keeping up with my reviews you'll know that Princess Diana here is the last figure I needed to complete my Collect & Connect model of Batman's Grapnel Blaster, so I needed her not only because Gal Gadot's Wonder Woman was amazing but also to complete the line. Wonder Woman has been really hard to find. I saw her back on January 1st when I picked up my Armored Batman (I wasn't sure if I was going to collect the line at that point) and then never saw her again. Thanks to my parents who actually kept an eye out for this one for me. It's insane that Mattel made both Wonder Woman and Superman so hard to find in this line, isn't it? Let's jump right in and check out this Amazonian Warrior princess, shall we? 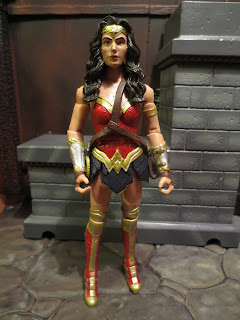 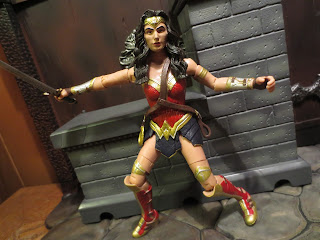 * While the articulation isn't the best on this figure (I'll deal with some of the problems below) Wonder Woman is a very sturdy, well put together action figure. While  assume most of these are ending up in the hands of collectors, I think any child would have a ton of fun playing with this without too much worry of breakage. Like the real Wonder Woman, this figure doesn't seem the least bit fragile. 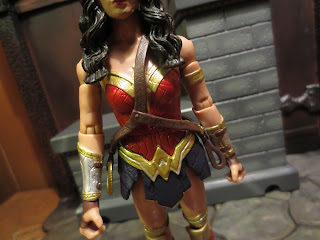 * Wonder Woman's body, particularly her armor, has an excellent sculpt and some great paintwork. I love the metallic red, blue, and gold used here! There's a lot of sculpted detail that really helps to add some character to the armor, giving it a very formidable appearance. I love this costume design for Diana! 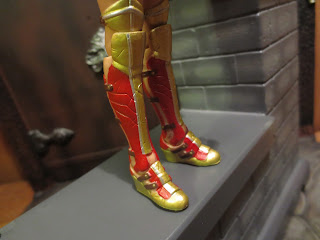 * Wonder Woman's boots and gauntlets are also really nicely done with impressive paintwork. If you look closely there are quite a few little nicks and scratches on them. I like the metallic paint used here as it is extremely eye-catching and helps Wonder Woman to visually stand out from Batman and Superman. 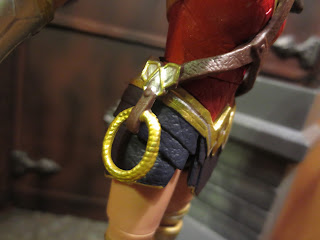 * Diana's harness, while permanently attached in the pack, is a separate piece that hangs loose across her chest and hips. It has a leather like texture to it and a holder for her Lasso of Truth. The lasso is sculpted on and isn't removable but it's a cool detail. 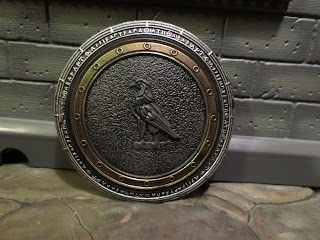 * Wonder Woman's shield might be the best accessory in the Batman v. Superman line. This thing is just beautiful! It's large, well sculpted, and has a paintjob that will rival anything you'll see in this scale. Not only is there an insane amount of textured detail and the bird logo on the front but there's a quote in Greek characters along the edges (apparently a quote from Joseph Campbell's Goddess). 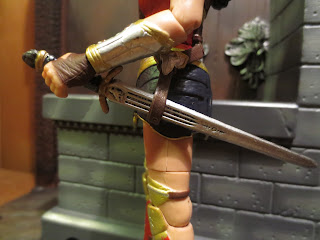 * I love Wonder Woman's sword. It pretty closely resembles the film prop and it isn't at all rubbery or overly soft. It's a really solid, well detailed accessory. Heck, it even has a nice paintjob with a dark wash and the image of a bird representing the Amazons of Themyscira. It even snugly fits into the leather loop on her left hip. 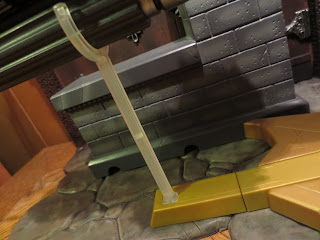 * I'll nearly always credit a company for including a build-a-figure piece, even if they do something crazy like Mattel where the "Collect & Connect" accessory was released over three separate waves. Yeah, that was frustrating but now that I have the Grapnel Blaster assembled I'm pretty pleased. Look for a review of it, soon! Wonder Woman's piece is the tip of the base and a clear plastic rod that holds the front of the Grapnel Blaster up. 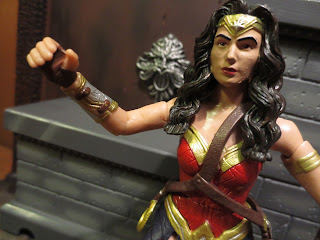 * While the quality of the figure is good, some of the articulation is limited. Diana's elbows can barely reach a 90 degree angle which severely limits her combat poses. Secondly, because of how her hair was handled (more on that in a moment) her head has virtually no movement whatsoever. 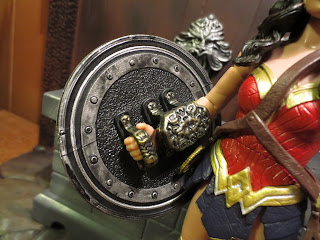 *Here's a look at the back of Wonder Woman's shield and, as you can see, it's really impressive from the rear. This is an incredible accessory and that's why it's so disappointing that Wonder Woman has a difficult time grasping it properly. Her right arm has to slide through the first section and then grasp the handle which turns out to be really, really tough. I like the thought put into this but the lack of swivel/hinge wrists makes this really difficult. 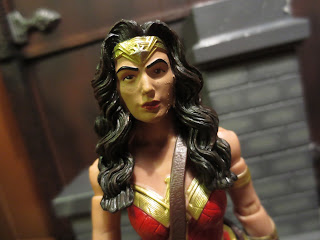 * My absolute biggest problem with this figure is how Diana's hair was handled. Rather than mold it as a separate piece, Mattel decided to sculpt the hair and head as one piece, which has led to a few problems. First, as I mentioned above, the hair is solid and doesn't allow for any movement. Second, the face had to be painted over dark plastic. This gives Wonder Woman's face a somewhat uneven look and also means that there is some odd slop between her hair and her face. If you get the chance, choose carefully in person! 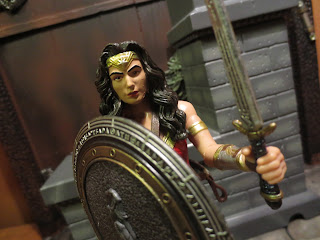 Diana does have some problems but, all things, considered, she's Great and one of the figures from this line that I think stands out the most. Her accessories are top notch, the work on her outfit is quite impressive, and she has a very colorful, appealing paintjob. If you're a decent painter you might even be able to fix the bleed between her hair and face which would probably make Wonder Woman the best figure in the line. She was challenging to get my hands on, which just shouldn't be the case with a character of her caliber, but I'm glad to have her. Now I'm really curious to see what Mattel will release for Wonder Woman's solo film coming out next year.


I have reviewed a few other Wonder Woman products including the Kotobukiya Boshoujo Armored Wonder Woman, the New 52 Wonder Woman versus Katana 2-pack, and a set of Batgirl and Wonder Woman Magnetic Salt & Pepper Shakers.