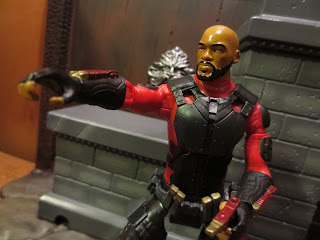 Today my coverage of Mattel's Suicide Squad action figure line continues with a look at Deadshot. Deadshot, AKA Floyd Lawton, is an assassin and marksman who is typically the backbone of the Suicide Squad. Will Smith is playing Deadshot in the movie and surprisingly, in a film with Jared Leto's Joker and Margot Robbie's Harley Quinn, I think he's kind of the wildcard; how is Smith going to play Deadshot? Is he going to be a classic Smith character cutting wisecracks or something different? While the trailers have given us more of a feeling for Harley and Joker, Deadshot's personality is still a bit mysterious. I'm excited to see how Will Smith handles the role. Let's take a closer look at the action figure, shall we? Join me after the break for a closer look at Deadshot... 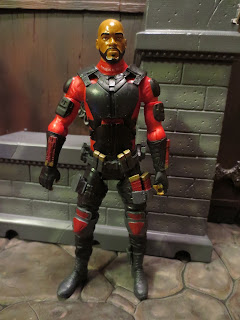 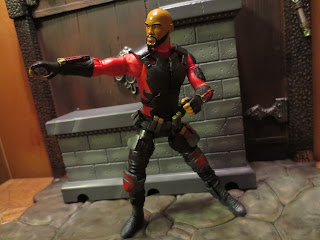 * Mattel's DC Comics Multiverse line hasn't been as well articulated as other similar lines like Marvel Legends, Star Wars: The Black Series, or even Mattel's own WWE Elite Series, but they are nice, durable figures that feel like they can handle plenty of play and posing. Deadshot feels sturdy and, despite some limited articulation in the hips, can take some cool poses. 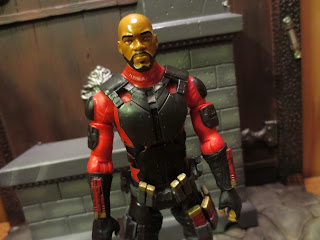 * I love the look of Deadshot's armor in the film. My desktop wallpaper has been the Suicide Squad cast lineup for a month or so now and I really think that this film has some fantastic costume design. Mattel captured Deadshot's body armor really well as these actually feel like pieces of modular armor over a standard athletic shirt of some sort. 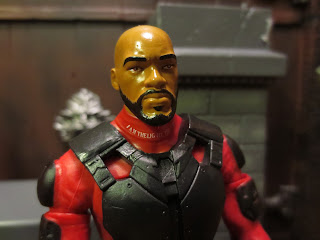 * Deadshot is actually sporting a pretty good Will Smith likeness. The paint work is clean (but not incredible) and there's no doubt as to who this is. It's much better than any of Galoob's old Men in Black toys or Trendmasters Independence Day line. Or X-Toys' Wild Wild West line. Yeah, there were a lot of Will Smith action figures released back in the day but this one looks quite a bit like him. I'm digging the text "I AM THE LIGHT, THE WAY" along his collar. I had to look at a few different stores to find one with decent print but it's a cool detail. 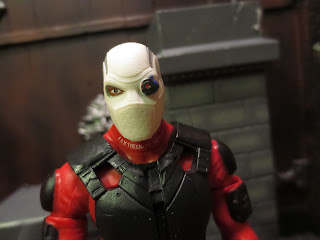 * Like Batman, Deadshot also comes with a second portrait that is easily swappable. If you want to cover Floyd's face you can slap this alternate hooded head on him with the cool aiming reticle over his left eye. This is a very cool headsculpt and it looks awesome. I love the texture on it and I'm really excited to see this in the film. 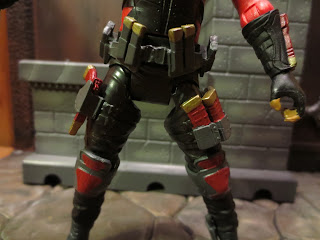 * The figure's waist and legs are really cool because there is a ton of excess stuff hanging around. Deadshot has three assault rifle magazines on his left thigh, four gold tipped magazines for his custom pistol on the front of his belt, and two smaller pistol magazines on each side of his waist. He also has a holster for his pistol and knee pads that are actual separate pieces which float over his knee hinges. There's a lot of interesting stuff here and it looks pretty good. 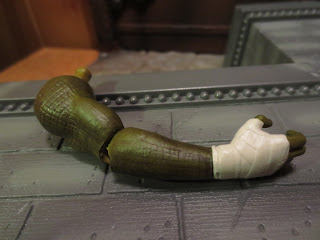 *  Deadshot also comes with a piece to the Killer Croc build-a-figure Collect & Connect figure that is spread out over the Suicide Squad sub-series. I'm still always a fan of build-a-figures, especially when it's a property I'm really invested like Suicide Squad. 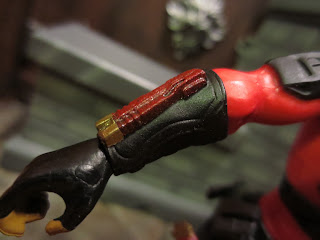 * Floyd Lawton's wrist guns are a vital part of the character's look and I'm glad they're part of the Suicide Squad costume and included on the action figure. The problem here, though, is that they're really very flat and close to the wrist. If you're trying to pose Deadshot using these you're going to run into the problem of the barrels not being high enough. They either needed to be higher (good solution) or Mattel needs to implement swivel/hinge wrists onto their DC Multiverse figures (best solution). 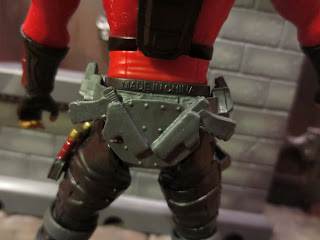 * Considering that these are 6 inch figures, their is just no justification for having non-removable (and non painted!) weapons in holsters. Deadshot has two small pistols (look like Glocks) in a holster on his back and a small knife on his left boot but they're extra pieces added on and not removable. Why!?!? These would have been just too cool as little extras! 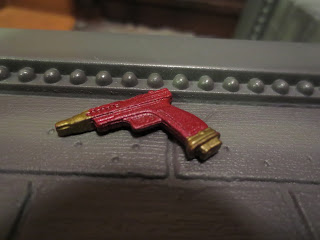 *  While it's cool that Deadshot comes with this customized Glock 17, why in the world did Mattel not give him his custom AR-15? That would have been an awesome inclusion. Also, the Glock 17 is kind of odd and rubbery, although I do like the paintjob. The lack of Floyd's rifle just kills it for me, though. That should have been a primary accessory. 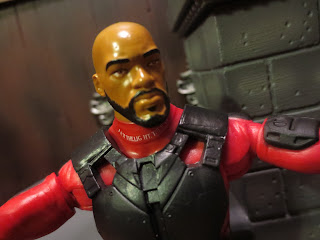 I'd heard some early criticism of this figure but, after getting my hands on him, I actually like him quite a bit. He's a good Deadshot figure with a pretty solid Will Smith likeness. While Mattel has made some poor decisions with this figure such as the non-removable weapons, awkwardly positioned wrist guns, and lack of an assault rifle, there is also a lot of solid work here that probably can't ever be used again: We're getting a surprising amount of unique sculpts in this line and that's definitely always a plus. This is a Good and a 1/2 figure who seems to be the most heavily packed one out there. Just make sure you get a really good paintjob on the writing on Deadshot's collar: I passed this guy up a few times to find one that was legible.

I've reviewed a couple of other Deadshot figures on the site: Deadshot from Arkham City and the New 52 Suicide Squad Deadshot.