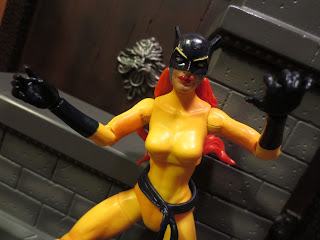 It's Patsy! Well, kind of. This is Hellcat and she was part of last year's Marvel Legends Infinite Series and was one of Hasbro's bizarre variants, along with Spider-Woman, under the name Fierce Fighters. I certainly recognize the character although I wasn't aware of her complicated background until I began to research her for this review. Long story short, Hellcat was originally a teenage girl named Patsy Walker who appeared in 1944 in a variety of teen romance and comedy comics (think Archie) published by Timely Comics. Eventually, Marvel takes over and turns Patsy into a superhero in the 1970s.  Patsy becomes Hellcat, joins a number of teams such as the Defenders, Avengers, and Lady Liberators. That's a pretty crazy transition. Guess what else? Hellcat is Jessica Jones' best friend Patricia "Trish" Walker on the Netflix series Jessica Jones. The way that Jessica Jones Trish growing up as a teen sitcom star with the show "It's Patsy!": Totally a reference to the fact that the character was originally a teen romance and comedy comic character. Consider my mind blown. That's some incredible work at adapting your material, folks behind Marvel. Now, considering that I have Nuke and Hellcat, and the Purple Man is coming this summer in a SDCC exclusive set, can we please get a Jessica Jones figure, Hasbro? Well, we should probably start talking about Hellcat, so let's get started... 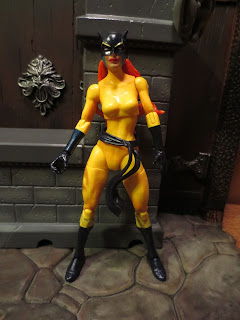 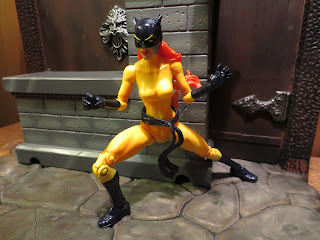 *While the females are lacking the double-hinged elbows some of the male figures have, overall she's an extremely well articulated figure. Marvel Legends are just extremely fun figures to play around with, and it helps that they feel so durable. 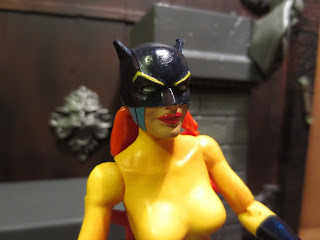 * I love the Hellcat headsculpt. It's definitely an unusual look (something about the cowl reminds me of the Adam West Batman costume) but it works for the character. There's some great paintwork both here and on the yellow bodysuit, which gets a nice two-toned effect to give it some dimension. I love it. 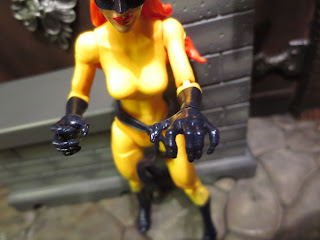 * I love Hellcat's claws. The right one is a nice grip while the left one features her fingers splayed out as if she's getting ready to deal some damage to her opponent. 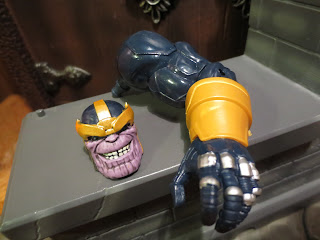 *While Thanos' head and left arm won't be much use to anyone not planning on collecting this entire set (I'm still not) I can definitely see the value in including them. Hasbro has delivered some nice build-a-figures over the past couple of years and I'm glad they continue to offer these. I honestly almost grabbed the figures needed to complete Thanos but the Captain America from this wave is now pretty tough to grab. 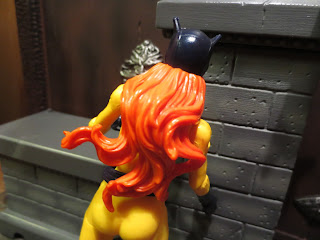 * I like the sculpt of Hellcat's hair but it needs a wash. A paint wash, that is. It's a solid sculpt but a dark wash really would have improved the appearance and shown off the excellent sculpt. 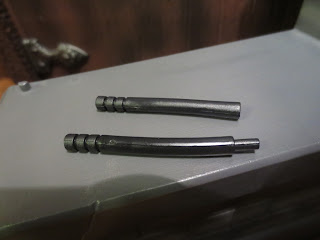 * I'm just not a big fan of these batons. They also came with Daredevil but they're just odd. They're not rubbery like Matt's batons but they're still oddly warped. Also, Patsy only has one gripping hand so she can only hold one at a time or hold them as an odd stick of some sort once you've attached them together. 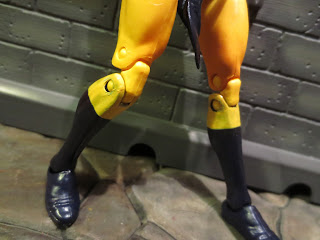 * Yellow is always a tough color to get correct with paint and it's unfortunate that Hasbro tried to paint the yellow bodysuit just outside of Hellcat's boots and gloves as the yellow paint doesn't cover the dark plastic of her boots and gloves well at all. These parts of her suit now have an ugly greenish tint to them. 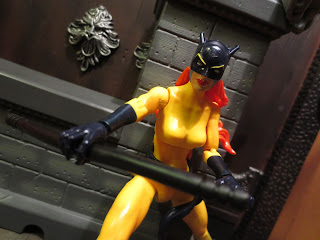 I'm really glad to have this figure although I'll admit that she's a bit underwhelming compared to so many other recent Marvel Legends figures. She's well constructed but the poor paintwork next to her gloves and boots kind of disappoints me as does her club. Still, I love the headsculpt and the look of her costume. She's a good solid figure, though, and kind of a cool purchase if you're a fan of Jessica Jones. She's a solid Good Marvel Legend in my eyes.

This is the only figure of Hellcat I've ever reviewed but I have reviewed plenty of other Marvel Legends figures: