Toy Review: By the Power of Grayskull from Masters of the Universe by Mega Construx 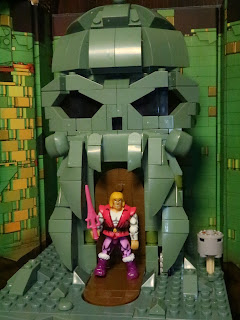 Mattel actually had a couple SDCC 2022 exclusives for Masters of the Universe this year which they also sold through Mattel Creations. For Mega Construx, the exclusive is the "By The Power of Grayskull" set, a fun display piece that allows you to transform a Mega Construx Prince Adam figure into He-Man in front of a Castle Grayskull facade. It captures what is perhaps the most iconic image in the franchise in brick built form and does a pretty neat job of creating something that's fun to display and show off. My set arrived in the mail last week and I've had a fun time building it and messing around with the "transformation" feature. Ready to hold aloft you magic sword and say those familiar words? Then join me after the break... 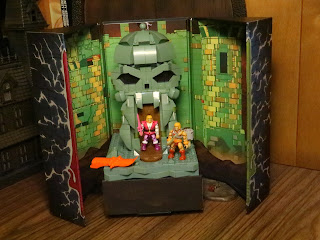 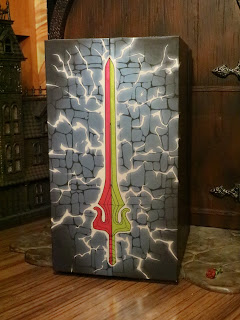 The Packaging:
* The set features a large cardboard backdrop and base that augments the build. The backdrop does fold up and seals with magnets embedded in the edges of the cardboard flaps. It's a rather high quality backdrop and when it closes the front has an image of the Power Sword surrounded by lightning. Half is maroon, like Prince Adam's sword, and the other half is a greenish-yellow, reflecting the Power Sword imbued with the Power of Grayskull. It glows in the dark, too, so it'll look cool even when the lights are out. 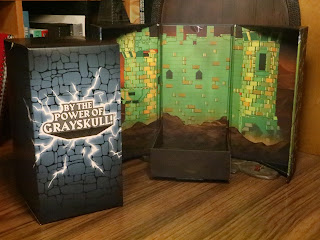 * Here's a shot of the cardboard backdrop unfolded without the brick build in it (it shows off the sides of Grayskull) and the larger "mailer" box that the set came in. All of my Mattel Creations orders have been very safely packaged and arrived in great shape, so this box cape safely packaged inside of a plain cardboard shipping box. 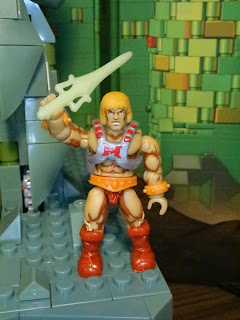 * We've seen He-Man many times in the Mega Construx line, but this time he's given some rather impressive shading to highlight the details. It's very dramatic looking and makes him look like he just jumped off of a comic book page. It's the same figure as the previous ones but the new paintjob and the glow in the dark Power Sword really set it apart and give it a distinctive appearance. 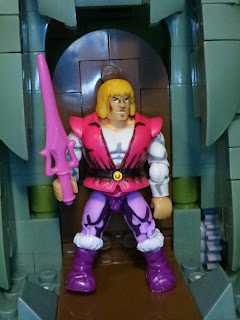 * The same thing can be said for Prince Adam: We've seen this figure before but the new painted on highlights really bring out the details. I'm not sure if the Mega Construx team was trying for a Filmation styled appearance with an animated "cel-shaded" look, but that's not the vibe I'm getting here. I'm seeing more of a MOTU: Revelation style or a comic book style. I still like the figure, though, as it just has a lot of presence on the shelf. 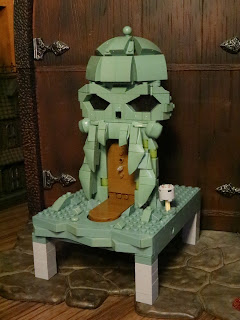 * While Mega Construx released a full Castle Grayskull back in 2019, this version of the castle is simply a facade of the front of the castle's face and door. The build includes the platform the door sits on, the door itself, a little rubble strewn about, and the pillars that allow it to sit inside of the cardboard backdrop's base at a raised level. 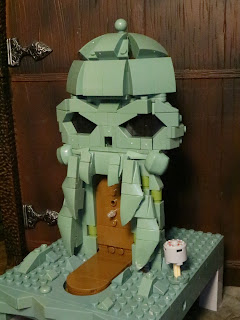 * It's a fairly quick build even though the set does have 449 pieces. The base does have some gears and such inside of it, kind of like a Lego technic set, and face uses some irregular building techniques. There are a couple different shades of green here which does help to subtly break up the look of the castle and make certain details stand out more than others. 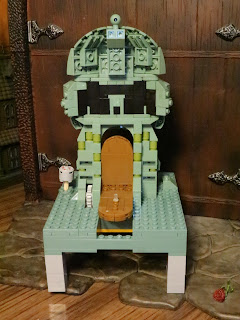 * Here's a look at the back of the Castle Grayskull facade. There isn't really any detail here to point out. It's truly just the back of the piece. A neat Easter egg or two would have been cool, but it wasn't in the cards. What you can see here is how the transformation feature of the playset works: There are two "doors" that Prince Adam and He-Man can attach to. The first door, for Prince Adam, is currently in place at the front of the playset while the second door is visible laying flat at the rear of the set. When a knob is turned on the side the the first drops down in the front of the set while the second door raises up into place. It's actually very simple but the fact that it's brick built is quite cool. 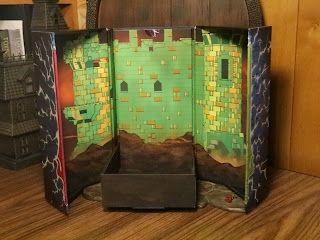 * Here's the cardboard backdrop. It's really nice and sturdy with an image of the sides of Castle Grayskull on it. The tray at the bottom is used as a base for Grayskull and a place to hide the door mechanism when it drops down. 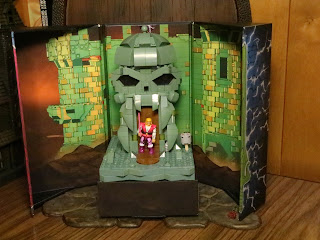 * Here's the brick built part of the set situated inside of the tray. 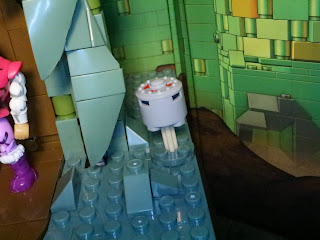 * The knob that activates the transformation feature sits right in front of the castle. It's a simple axil with a gray knob and a plate shaped like He-Man's shield adorning the top. You actually pull this piece out and plug it into the side of the base when you're ready to transform Prince Adam into He-Man. 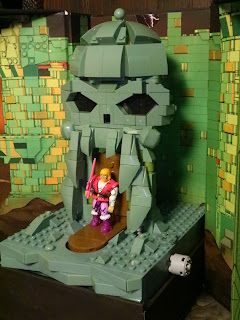 * Now that the knob is in place you place Adam and He-Man in position. Each door has a clear plastic peg that fits into the back of each figure, holding them in position. Unfortunately, you can really pose them with the sword up as there's not enough clearance between the door and the openings. The door ideally should have been maybe a block or two taller. 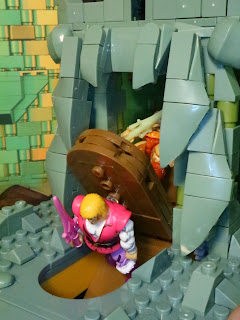 * Turn the knob and the door rotates down into the base, flipping the second door with He-Man attached into position. Pay close attention when building the mechanism and make sure that any of the pins around the base are fully pushed in. I had one that stuck out just a bit and it kept the door from moving until I finally found it. It should work very smoothly when everything is built correctly and in position. 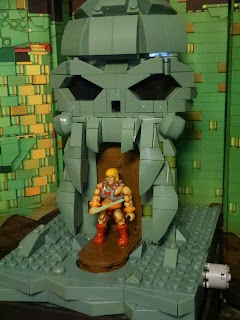 Magically, Adam has transformed into He-Man! It's really a fun little feature and I can't think of any other MOTU toy that really tried to replicate this feature in any way. As a kid I loved toys that had transformation features like this such as the Swamp Thing Transducer, the Beetlejuice Vanishing Vault, or any of the Batman playsets or vehicles that allowed for a quick change feature, so this Castle Grayskull scratches me right where I itch. 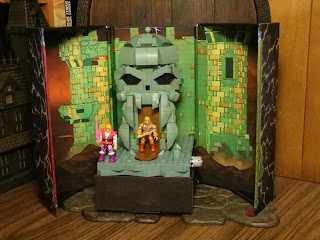 This was a rather neat exclusive and a fun, unique build. The detailed minifigures are really quite nice and, as with most Mattel exclusives, the presentation of the packaging and the art is just incredible. A few more little features or extras would have been cool but for a $30 dollar set it feels like you're getting what you pay for. I do wish the mouth/ door was a bit taller so He-Man and Adam could transform with their swords held aloft, but overall I'm still quite thrilled with this. It gets a Great and a 1/2 rating from me. I'm still waiting on my other Mattel SDCC 2022 purchase, the He-Man vs Skeletor 40th Anniversary 2-pack, but I'll be sure to review it once it arrives!

I've reviewed so many toys of He-Man/ Prince Adam that he has his own review archive. You can find them all at Fabulous Secret Powers!