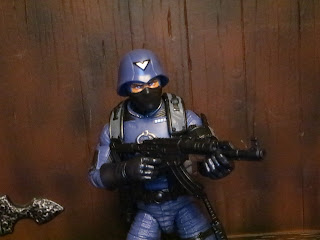 The most recent series of basic G.I. Joe Classified Series figures have been showing up slowly and I'll start reviewing them by taking a look at the Cobra Officer. The Cobra Trooper and Cobra Infantry have been two of the best figures in the line, so I had high hopes for the Cobra Officer. Since those figures were released earlier in the line, the aesthetic of the figures has changed a bit with the designs more strongly favoring their vintage counterparts. I was a bit concerned that we'd get a downgraded, less modern feeling figure but, fortunately, the Cobra Officer nicely pairs with the Cobra figures we've already received. The vintage Cobra Officer was released in the original 1982 series and has shown up multiple times over the years in different designs. This one takes the cake for me and is an amazing figure. Let's check out the Cobra Officer after the break... 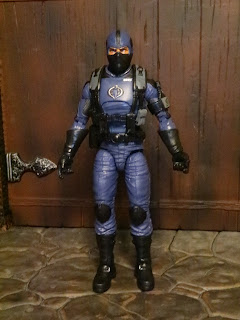 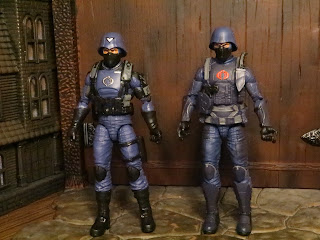 Comparison:
* Just for comparison, the Cobra Officer is on the left while the Cobra Infantry is on the right. There are some shared parts here (waist, legs) but details like the boots and gloves are really different. The Officer is definitely more traditional, but still quite modern and not wearing a low collared, pajama looking outfit like the cartoon. I'm OK with the Officer's outfit being a bit more focused on design while the Infantry and Troopers have more armored pieces. The helmets and portraits are also different. 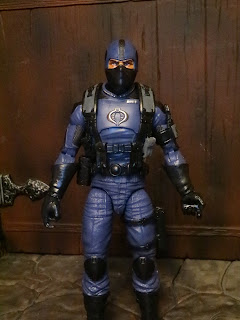 * The Cobra Officer looks fantastic with a very standard, all purpose battle uniform. The textures are fantastic and there are places where you can tell there's a bit more padding or armor. The team working on this line does a great job on sculpting different textures on the various pieces of clothing the figures are wearing and it's always a treat to see their work. The gloves are long, nearly elbow length leather looking gloves and the Cobra emblem on the chest is a sculpted detail that has been painted silver to designate the Officer. There's also some unique designs around the collar and a small grid that presumably shows off the Officer's rank. 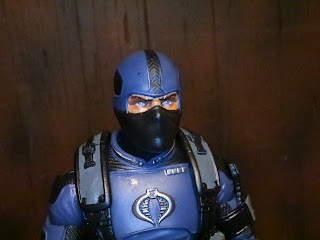 * The headsculpt is excellent. Yeah, most of it is hidden, but the Cobra Officer looks pretty intimidating. While the mask over his face looks like it's made of something soft and breathable, the hood over his head seems more like something with some armor or protective padding to it. 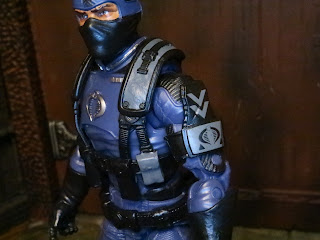 * Not only is his unique web gear cool (I like the grey details on the straps) but he's also sporting a rank pauldron on his left shoulder. Unless you disassemble the figure it doesn't seem removable as it doesn't fit over the glove easily. 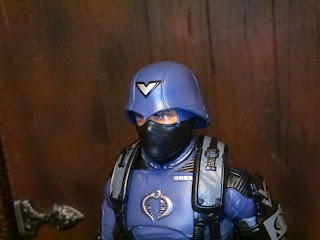 * The hemet is a bit less flashy from the back and sides than the helmets of the Cobra grunts but there is a rank insignia on the front to help the Cobras know who to listen to in battle. It might make a good target for Lowlight, too. 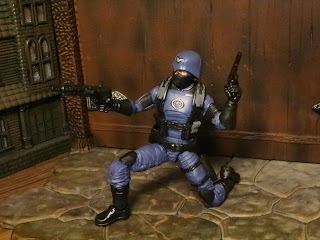 * Like the Cobra troops before him, the articulation on this figure is just amazing all around. He moves really well and looks fantastic holding his weapons in a variety of poses. This is definitely one of my favorites to pick up and mess around with. 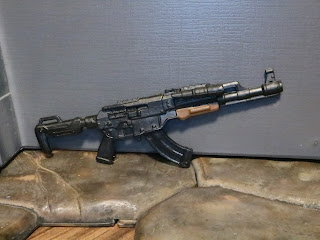 * Like the vintage version, this version of the Cobra Officer comes with an AK styled rifle. It's a great sculpt and while I do kind of miss the more sci-fi/ futuristic weapons of the earlier figures in the line, I do like the takes on more real world inspired weapons as well. The rifle has a banana magazine, a loop for a sling on the stock, a hollow barrel for a muzzle effect, and what I believe is a laser target designator on the right side of the handguard. 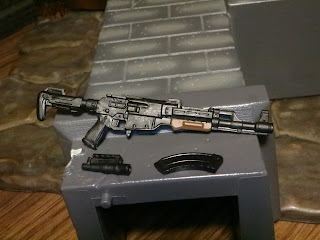 * The AK features a removable magazine and the laser target designator pops off as well. 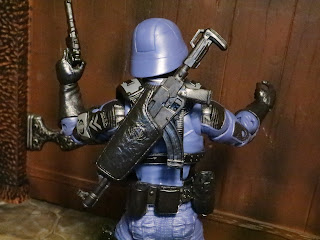 * For toting around the AK, the Cobra Officer comes with a leather case that fits on his back. There's a Cobra emblem stamped into the tote bag and it can hold the AK with or without the magazine. 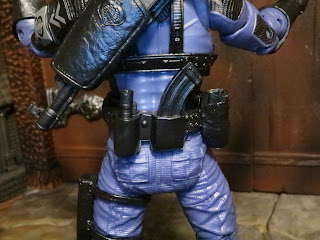 * If you want to remove the magazine you can store it on the pouch on the Officer's belt, along with the target designator. It fits right inside the pouch on the left. I absolutely love stuff like this. It's so cool how these figures can tote around all of their little extra pieces of gear. 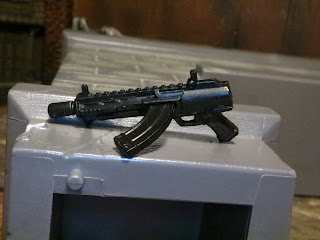 * Interestingly, the Cobra Officer's second weapon is a side-fed submachine gun. It uses the same magazine as the AK but seems a bit more compact. Side-fed SMGs were popular during World War II and the British military used the Sterling L2Ai until the late 1980s, but they're not really a thing anymore, so I'm not sure where the idea for this weapon came from. I like it, don't get me wrong. It's very cool. I'm just curious as to the inspiration or reasoning for it. 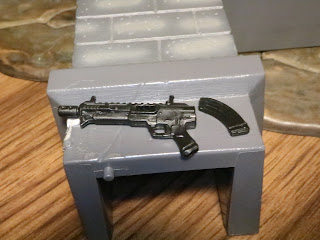 * The magazine is removable on this weapon as well and it is interchangeable with the AK magazine. 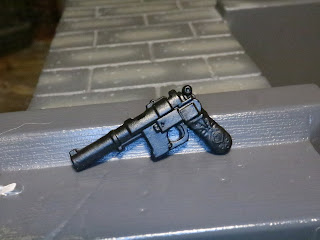 * The Cobra Officer's pistol is even more unusual. It's a broomhandle Mauser styled pistol but it looks a bit more modern. Maybe the Cobra Officers are big Star Wars fans? It's interesting to think of Cobra getting M.A.R.S. to crank these things out just because they like the design. 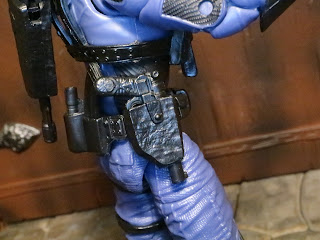 * The Mauser inspired pistol fits securely in the holster on the Officer's belt. It's a good, tight fit, and to get it out you'll have to shift his web gear a bit. It works great, though. 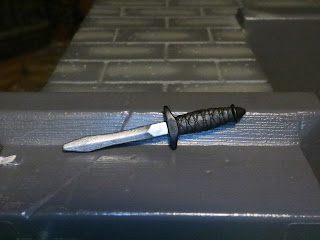 * There's also a dagger for when things get up close and nasty. It's another unique sculpt and looks like it'd be good for stabbing, kind of like a stileto. 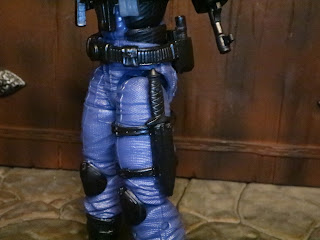 * The removable sheathe fits snugly on the Officer's left hip and holds his knife right where it needs to be. 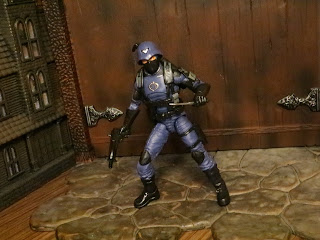 I'm not sure there's an action figure line out today that more consistently delivers stellar figures than the G.I. Joe: Classified series. They've got a great team who definitely cares about the brand and there's a great mix of classic designs and new ideas. The Cobra Officer is another Epic figure in the line who is packed with gear. I love the little extras like the removable laser targeting designator, the interchangeable magazines for the firearms, and the excellent web gear. This guy is well worth picking up and I'm hopeful Hasbro makes him plentiful at retail. He's really, really good.