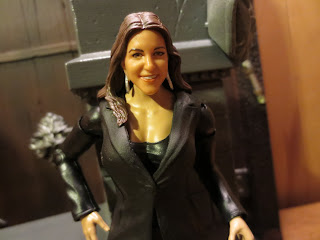 Today I'm looking at a figure of the WWE's Chief Brand Officer Stephanie McMahon! This figure is from Mattel's "Basic" WWE line which doesn't have a special title like the Elite Collection or the Defining Moments series. While I already own the SummerSlam 2014 Stephanie McMahon from Elite series 37, this version appealed to me because it definitely captures how Stephanie looks most of the time: Ready for business, not brawling. As a long term action figure collector, it's also interesting to me to see a mass market retailer action figure that is simply a female in a suit. How often do we see that? Most toy manufacturers and lines at retail do everything they can to avoid making females and here is the WWE line getting a Stephanie McMahon figure in a simple black pantsuit. I think that either shows the power of the WWE as a brand or the fact that no one wants to piss off an owner of the company. Ready for a quick look at the most powerful woman in the WWE? Then join me after the break... 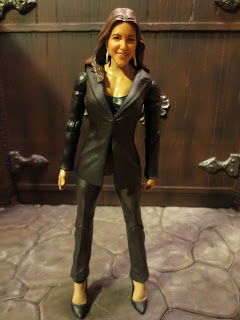 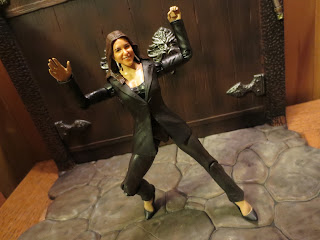 *This is the first single carded "Basic" figure I've purchased from Mattel's WWE Elite line. I had planned on ignoring the non-Elite figures but turns out that the basic female figures feature the same articulation as the Elite females. Yup, they have way more articulation than their male counterparts. Stephanie McMahon is as durable and well articulated as any of the Elite Divas. 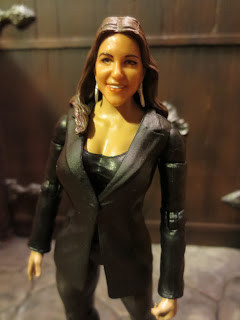 * I don't my picture does justice to what is a really good Stephanie McMahon headsculpt. They really captured her likeness well. It's definitely not as good as the Elite Series Stephanie but it's an admirable job for a figure that typically costs around $10. There's no doubt as to who this is if you recognize Ms. McMahon. 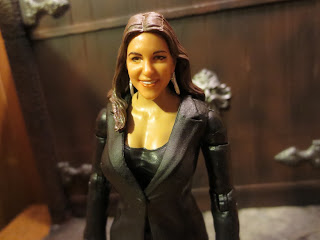 *The biggest problem I have with this figure is that the flesh toned paint on Stephanie's neck, chest, hands, and ankles does not match the flesh tone of her head. The head is much lighter than everything else. It looks to me like Mattel molded the entire lower body in black plastic and then painted over it. It's not atrocious but it's definitely noticeable. 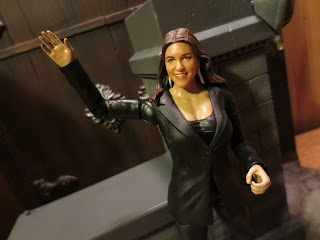 * Stephanie's jacket is a little too bulky. It's not terrible but it does look a little bit oversized and takes away from the sleek look of everything else. My guess is that the torso underneath is simply a reused sculpt and the jacket just covers it. It would have been nice to have the jacket as a sculpted part of the torso, however. 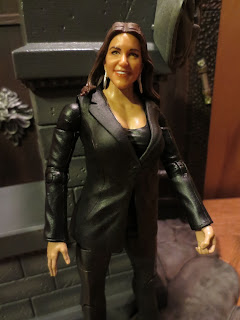 Stephanie isn't a bad figure. In fact, she's probably as good as some of the WWE Elite Collection figures, particularly due to her articulation. Seeing as we typically see her and Triple H in their business attire as members of the Authority, she's a necessary part of any well rounded WWE collection. If you manage to scoop her up at retail price, I'd say she's a Good figure. The jacket is a little bulky and I'm not loving the mismatched paint, but she'll look good standing next your Authority collection. Now I just need to go pick up that suited Triple H from the Daniel Bryan 2-pack (he has Elite articulation from what I've heard) and keep an eye out for the J&J Security battle pack.

I've reviewed a ton of other Mattel WWE figures, including: