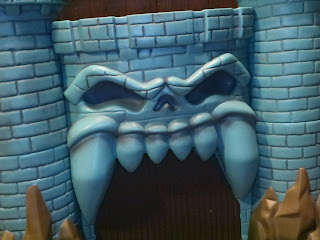 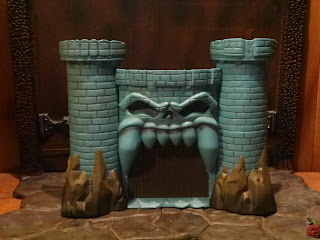 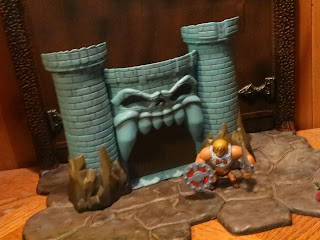 * Castle Grayskull is really a pretty cool looking accessory for the MOTU Minis line. I love how it's actually stylized like the minifigures so that it fits in perfectly. It's plenty large enough to put multiple figures on and around it, too. 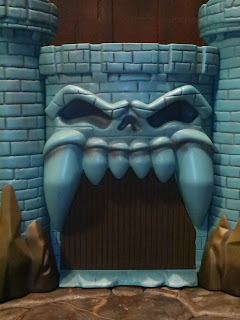 * The face of Grayskull is excellent. I really do love the massive teeth here and the expression. It's very clearly Castle Grayskull but it has the exaggerated style of the Minis line. The details are crisp and clear and the paintwork is neat and clean. 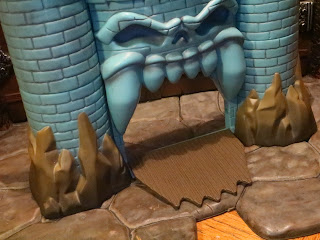 * While the jawbridge on this version of Castle Grayskull is rather plain and not rounded like it tends to be in most depictions, I'm still impressed that it opens. It's a fun play feature that makes displaying this little Grayskull that much cooler. 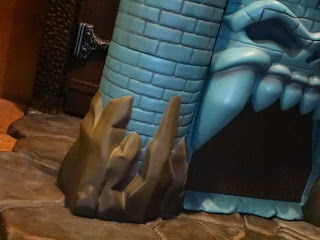 * I really like the rocks sculpted on the bottom of Grayskull's turrets. It's a unique look for the castle and, off hand, I can't think of any other of the toy versions with something like this. 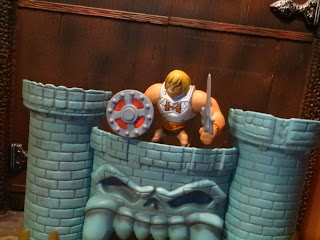 * Both the two side turrets and the middle of Grayskull (which also looks like a turret here, too) have little ledges allowing figures to stand on top. It's a fun way to display the MOTU Minis, although it would also work well with other small MOTU lines like M.U.S.C.L.E., The Loyal Subjects' Action Vinyls, or the Pint Size Heroes. 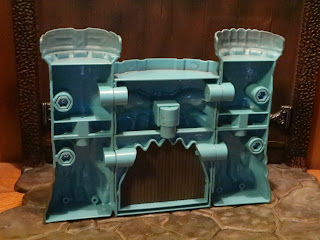 
* Here's a look at the back of Castle Grayskull. It's really just the pegs and such which hold the set together (it stays together well and is one of those "one time assembly" items. I wouldn't risk taking it apart. 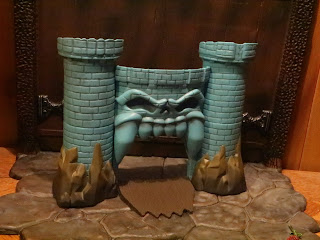 I bet many of you forgot this Castle Grayskull even existed, didn't you? heck I bet there are quite a few of you who didn't even know it existed. It's a cool display piece that's a fun backdrop for a number of MOTU minifigure lines and it's a Great piece, especially if you liked the MOTU Minis line and just happened to end up with it. The Masters of the Universe Minis are actually coming back this year, making their way to retail for the first time. They're going to be blind bagged (boo!) but we're getting lots of new sculpts though (yeah!). You might want to track one of these down now as the sets that make it up aren't terribly expensive the last time I checked.