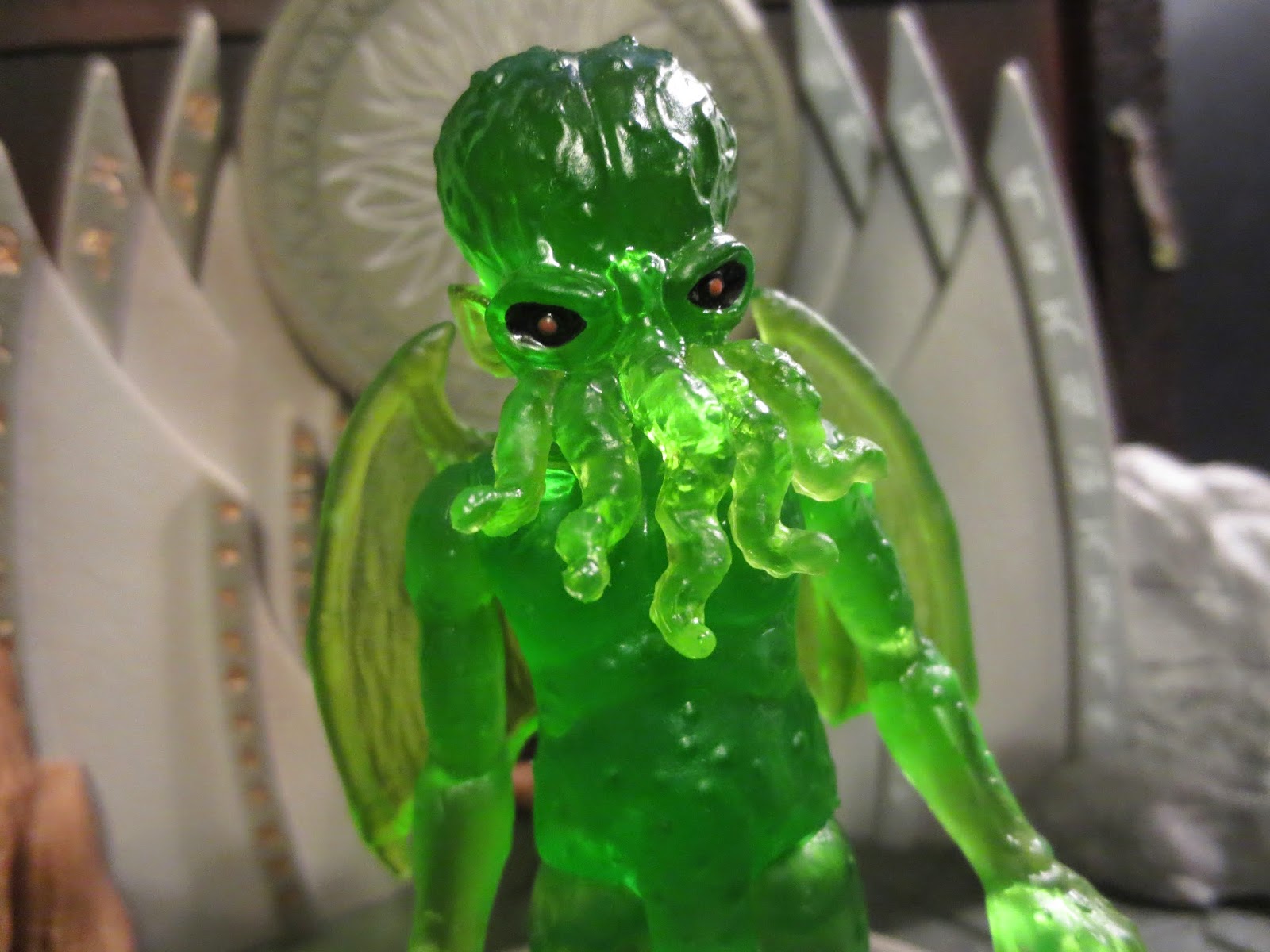 While the figure I reviewed yesterday was the Spawn of Cthulhu and the most well known Great Old One himself, I think today's figure might actually be a representation of Cthulhu. A variant and a stretch goal for the Kickstarter campaign, Conjured Cthulhu seems to represent a conjured image of the creature that has been summoned by his followers. You know, kind of like a holographic Emperor Palpatine or the Spirit of Hordak figure. Some people just love translucent figures, making this guy quite attractive to a wide audience. Ready to conjure up some Cthulhu awesomeness? Then join me after the break... 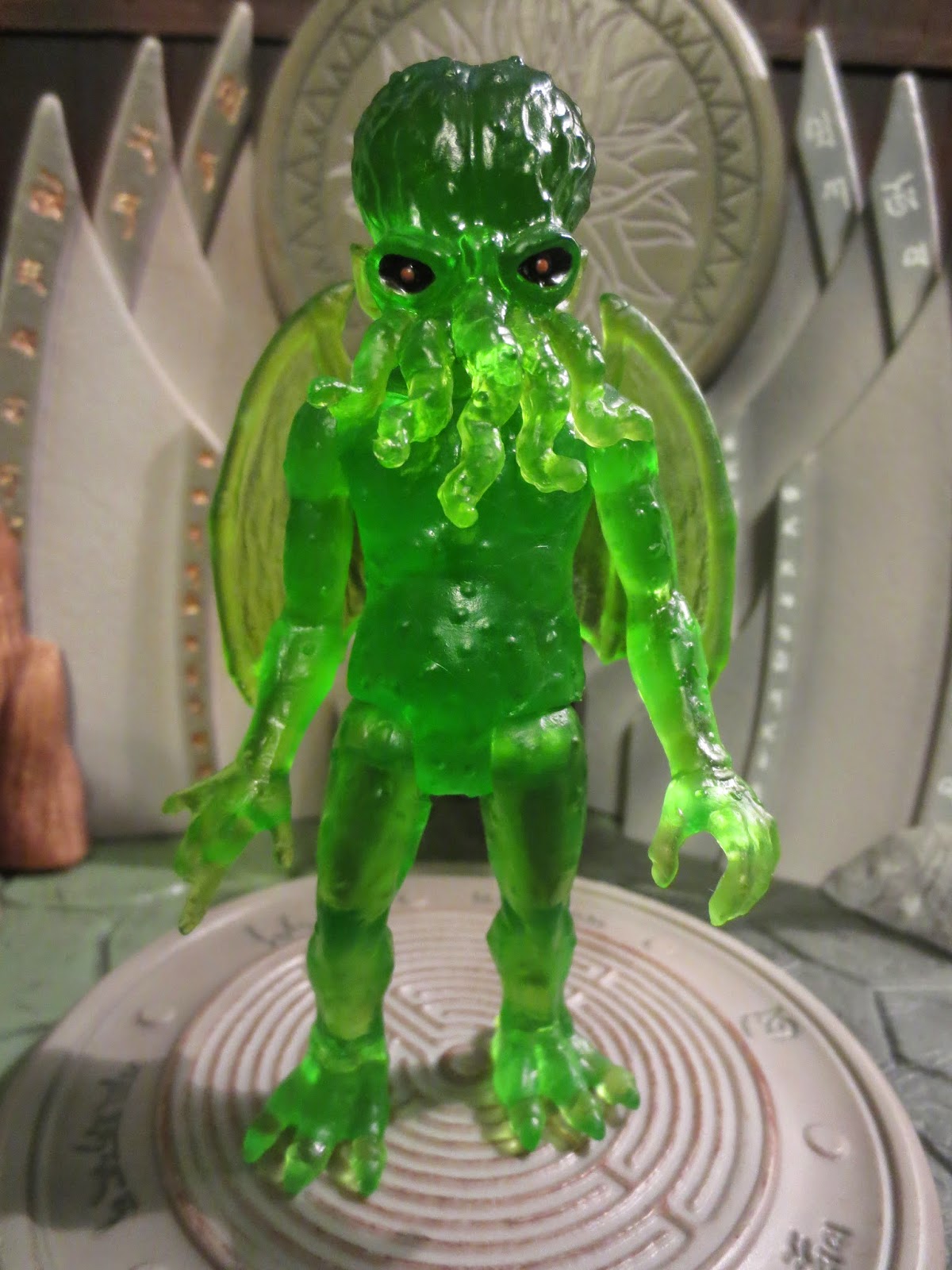 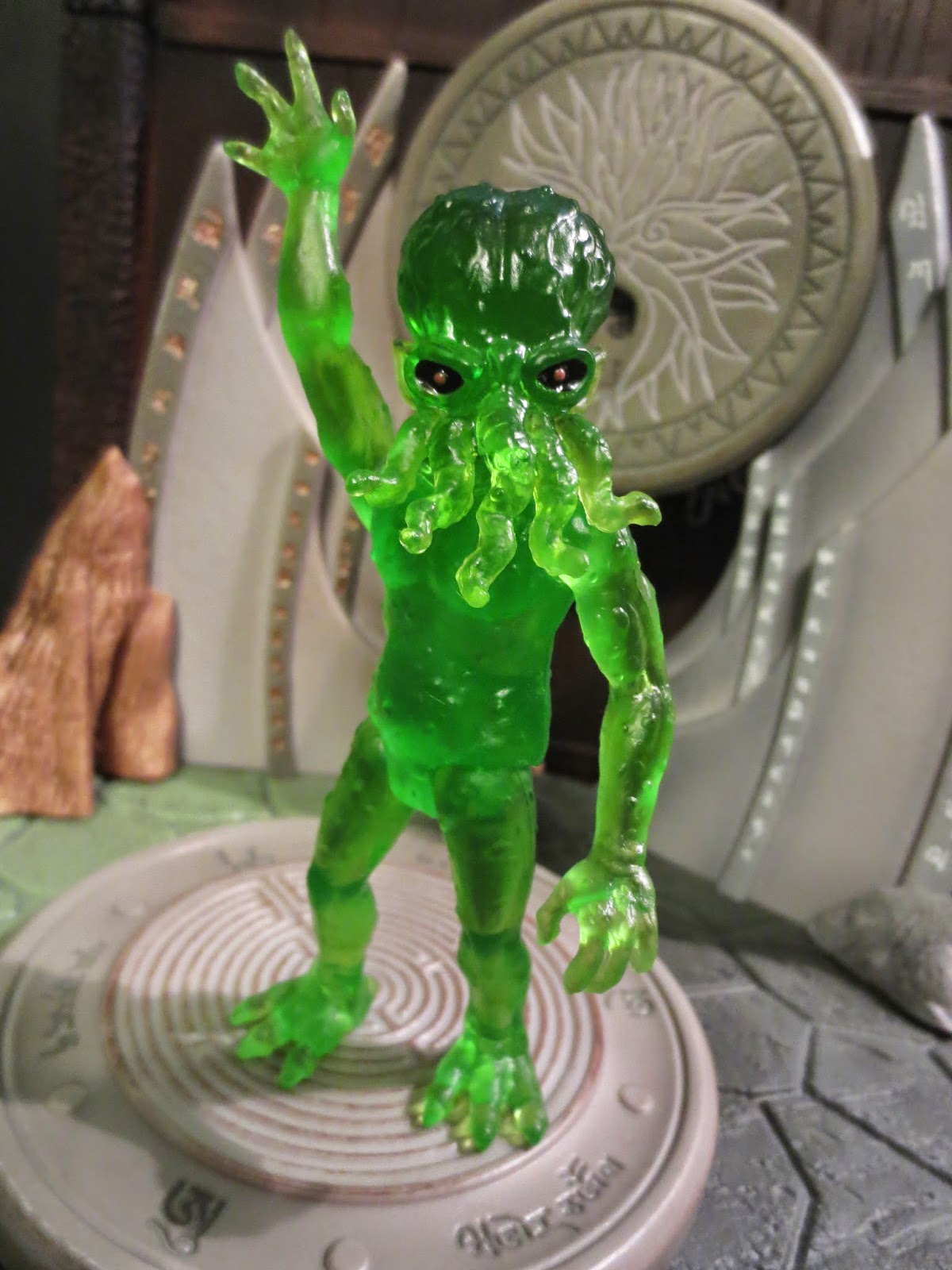 * Like the Spawn of Cthulhu, everything about this figure feels very solid. He stands easily and feels like a durable toy built for hours of play. For being a small figure (four inches) he has some nice heft to him. The grabbing and grasping hand poses are nice for a figure that doesn't really need to hold anything. His articulation feels rather solid, too. He's definitely neither brittle nor gummy-feeling. 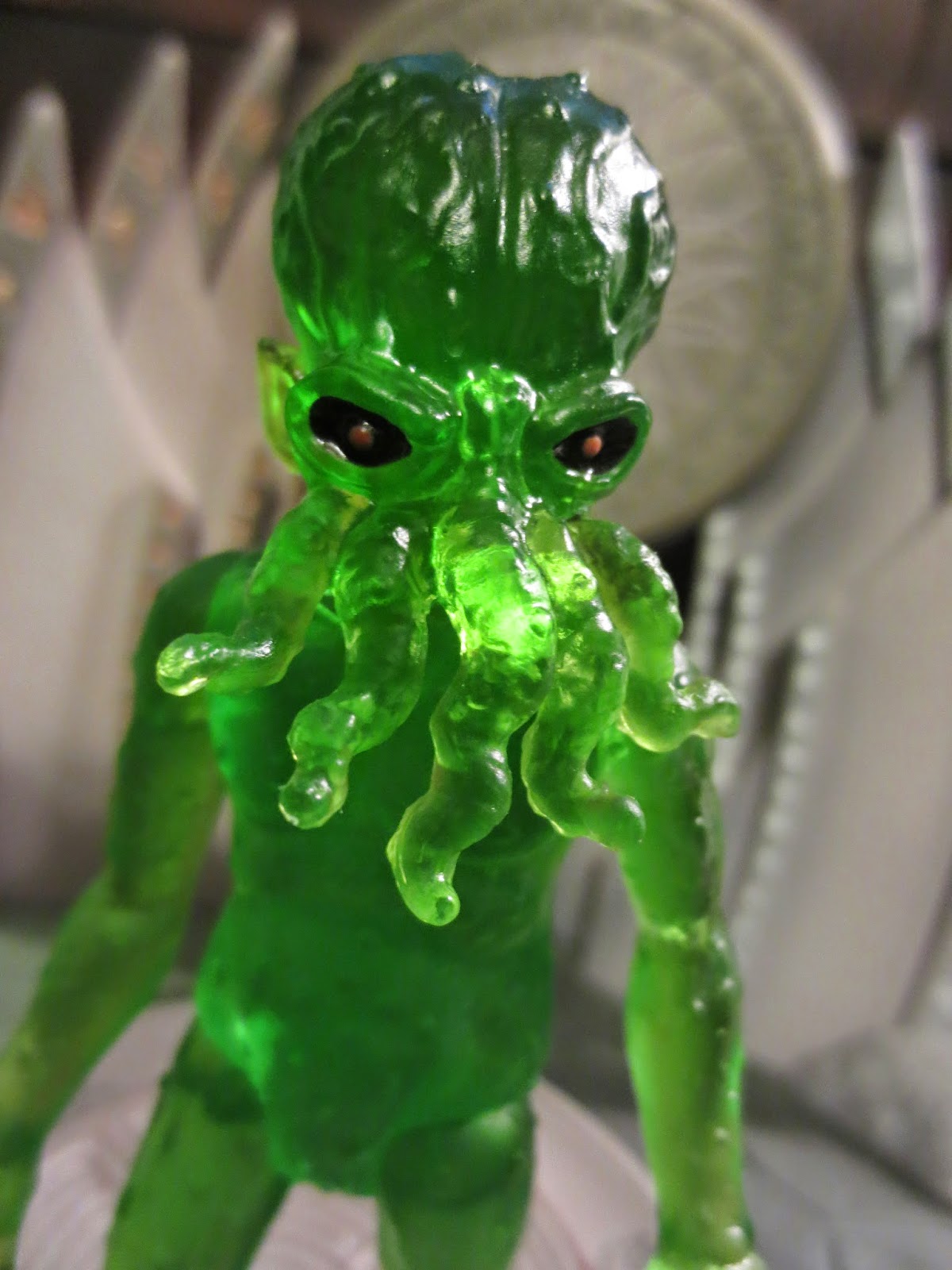 *The sculpt is shared with the Spawn of Cthulhu figure, so that means it is quite amazing! I love all of the lumpy, bumpy, veiny details covering this entire sculpt. While this guy looks and feels like a retro toy he feels more like something from Knickerbocker's Lord of the Rings or a later Kenner Star Wars figure. He stands out in a big way from many other vintage styled toys. 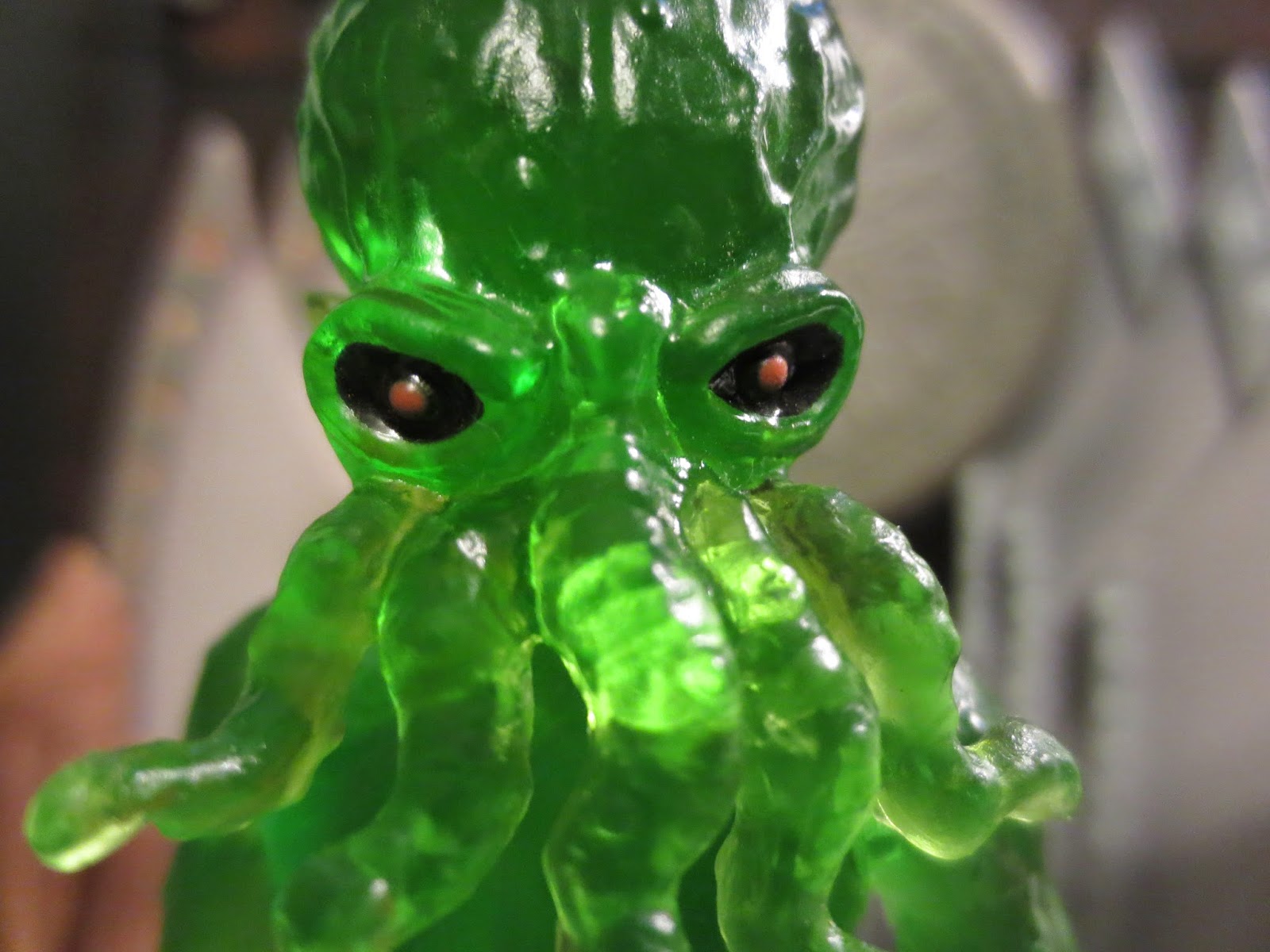 * To better convey that is the conjured form of Cthulhu the figure has been cast in an awesome translucent green plastic. He looks like he's made from lime Jello! The only actual paint applications are those on his eyes but they look really cool. This is definitely one of the coolest translucent figures I've seen in quite some time! 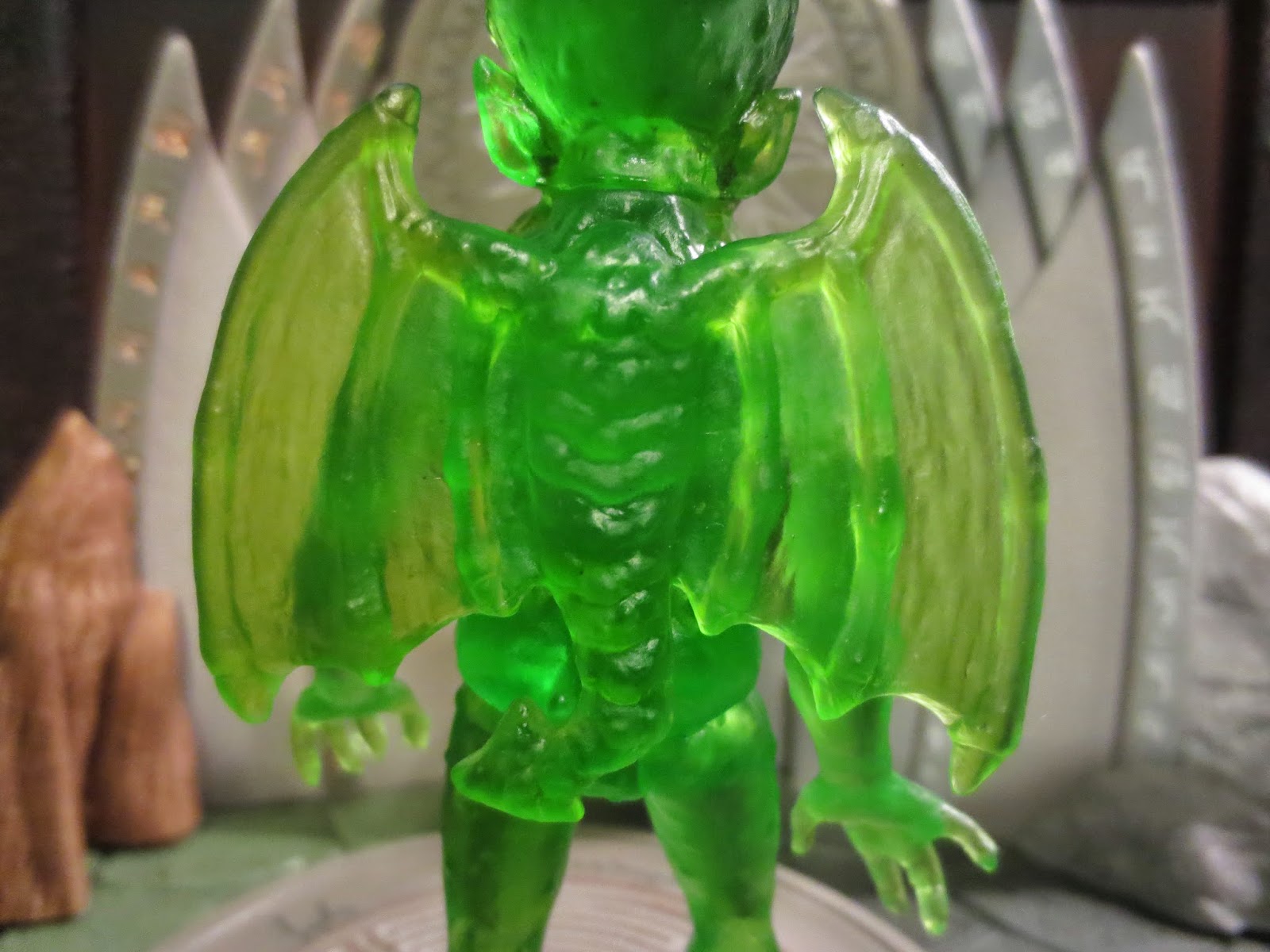 * Conjured Cthulhu has the same removable wings as the Spawn of Cthulhu figure. The wings easily plug into the back and stay put rather securely. They're made from a rubbery material that makes them light and slightly pliable. 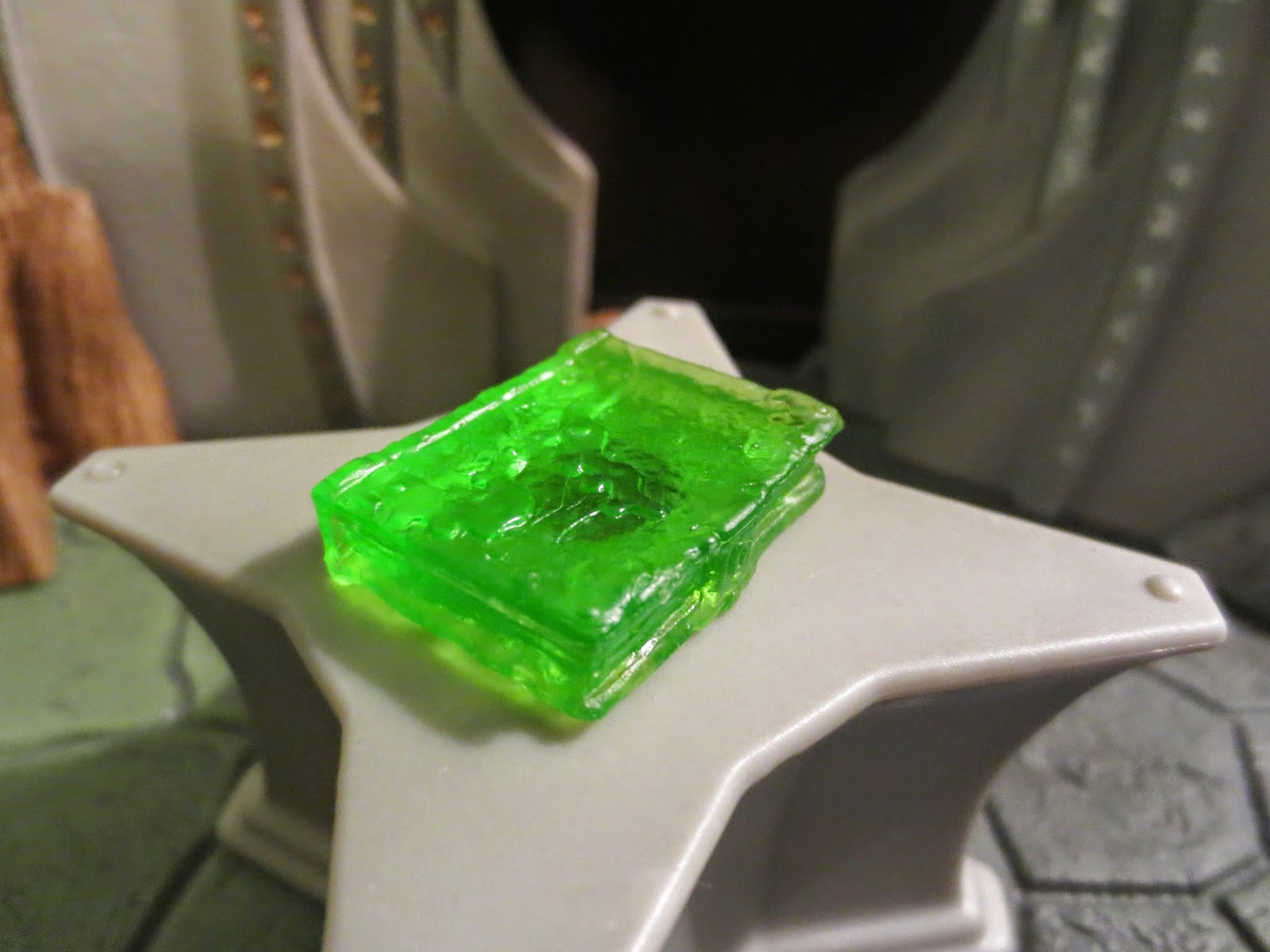 * Conjured Cthulhu comes with the same Necronomicon accessory as the Spawn of Cthulhu except that it's molded in translucent green plastic. I'm really not sure what to do with this peace as a translucent book doesn't make much sense. I would have rather seen this molded in a different color. Not a huge problem but just something that I think could have been done better. 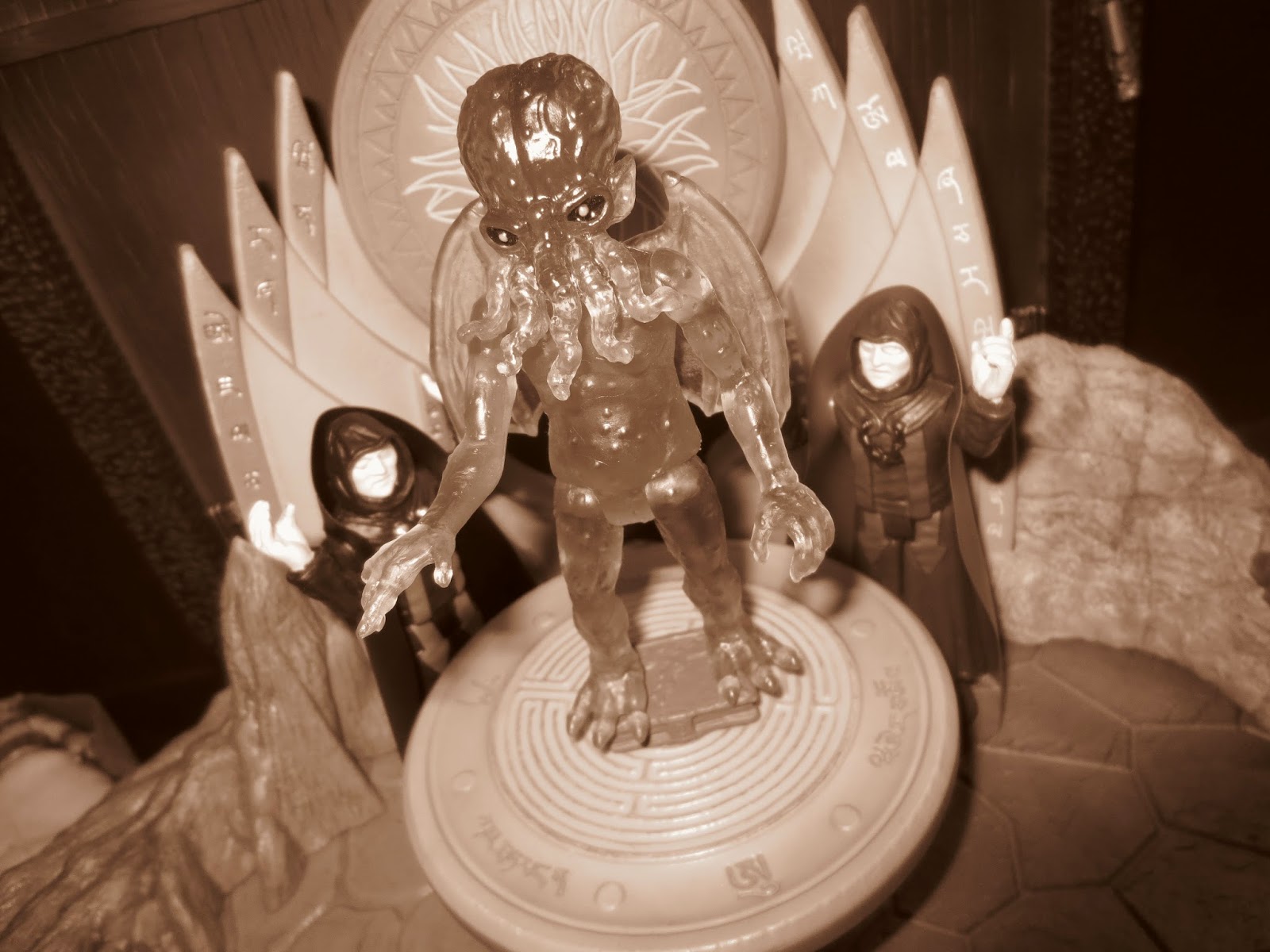 As far as simple paint variants go, Conjured Cthulhu is a great one. He's really impressive and is as visually striking as the Spawn of Cthulhu figure, but in a different way. Unfortunately he was only able to Kickstarter backers of the Legends of Cthulhu project so you'll have to scour the secondary market for him. As it is though, I'm giving him a Great and a 1/2. The figure is flawless. I just wish his Necronomicon had been cast in a different color. I have high hopes that this line will continue and bring us more creepy creatures, demented deities, cryptic characters, and arcane adventurers as well as a certain author and the oversized Cthulhu himself. Let's hope!


I'm making my way through reviewing the entire line. So far I've reviewed:
The Cultist
The High Priest
Spawn of Cthulhu 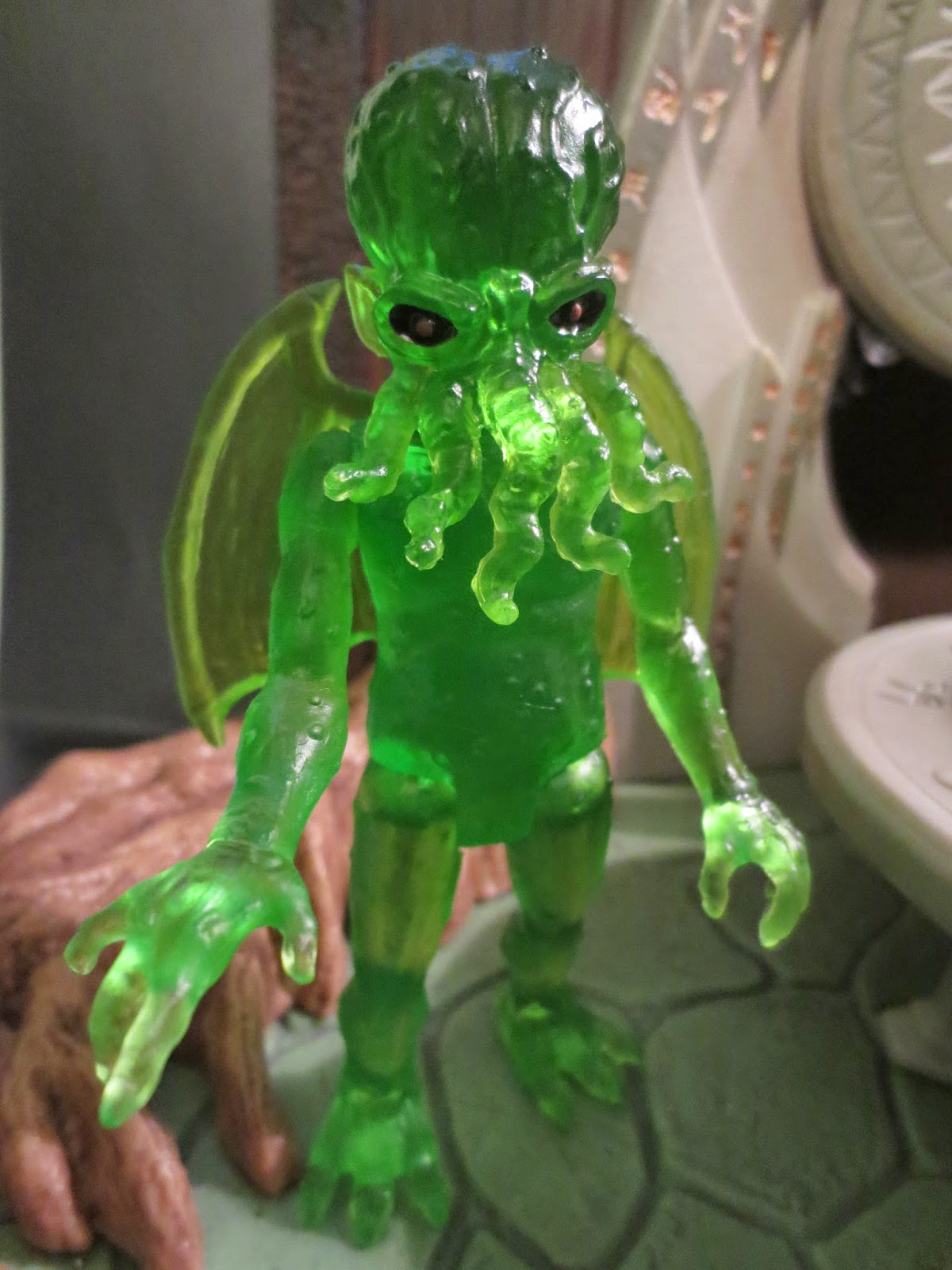 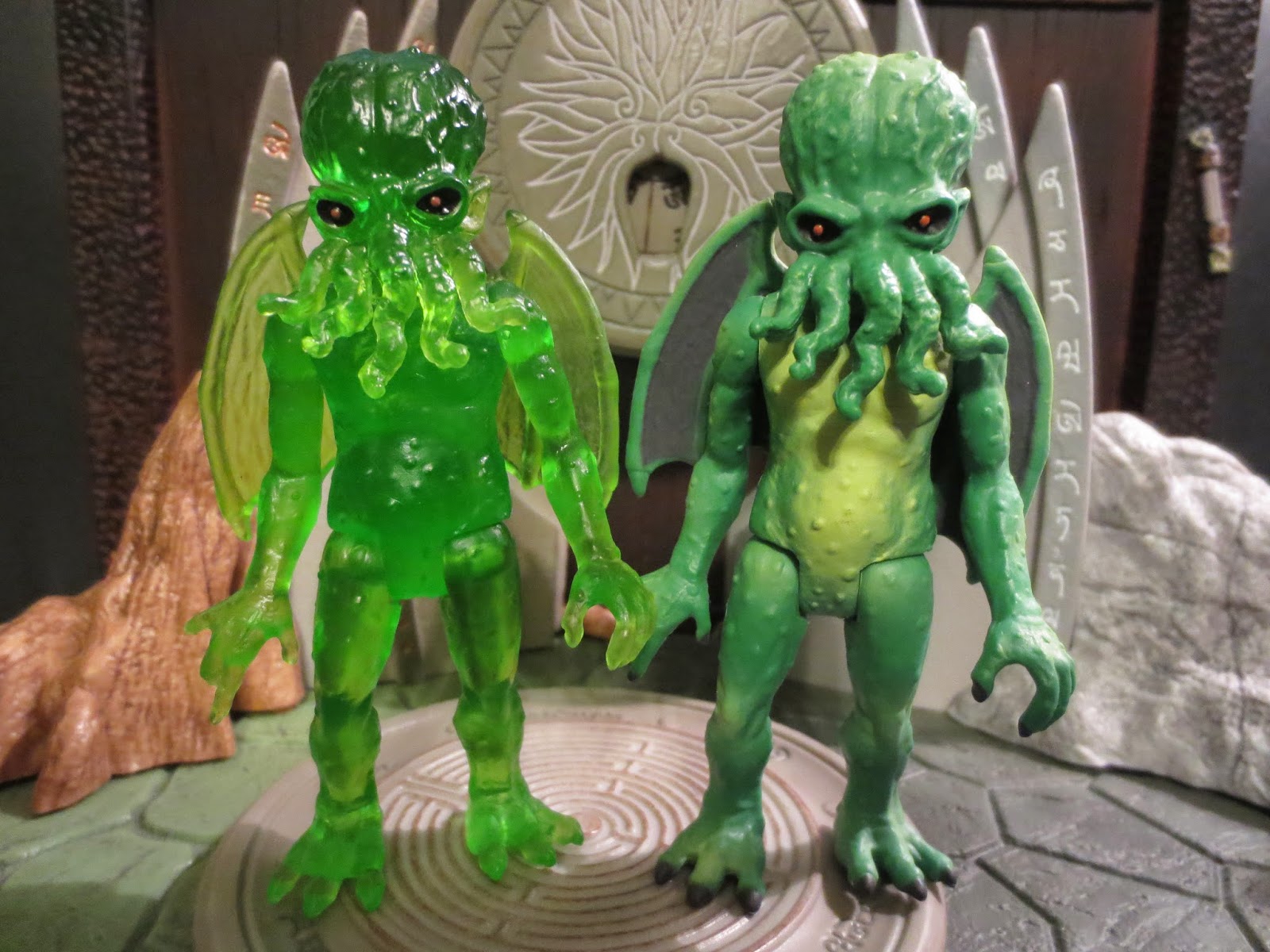