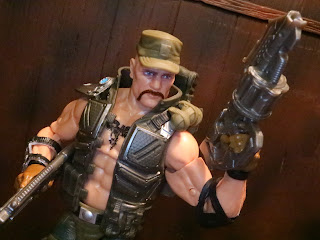 Hasbro's G.I. Joe: Classified Series has so far been one of the most exciting toylines of 2020. It's release was pretty much a true surprise (though collectors had been speculating about a similar line for years) and it so far has seen a steady stream of excellent figures. Today I'm checking Gung Ho, a new interpretation of the popular Marine who is part of the second series of figures (alongside of Cobra Commander and the Red Ninja). Gung Ho was such a popular character that he had five figures in the vintage line and 16 more since the 1997 relaunch of A Real American Hero. Like most Gung-Ho figures released since 1997 this one is based on the ARAH v1 figure with a bare chest and a vest. Gung Ho (usually written as Gung-Ho, but this figure is listed as Gung Ho) is the first figure in this line that I'm really very mixed on. There are some things I love about him and some others that I find to be very disappointing. Let's take a look at Gung Ho after the break and see if he's got what it takes... 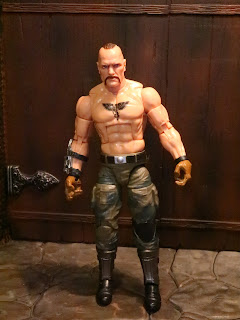 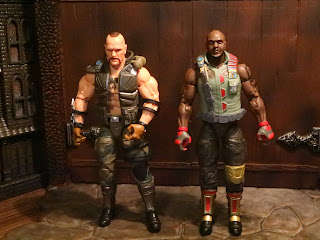 * Gung Ho (on the left) uses the same basic body as Roadblock from series 1 (on the right). The arms, torso, and most of the legs are reused, though Gung Ho does have a different left kneecap. He also reuses some of the accessories from the Target Cobra Island Roadblock. 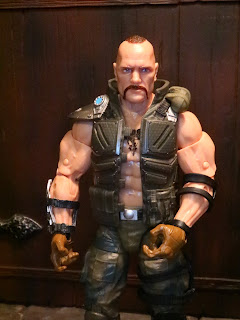 * Overall Gung Ho is a rather awesome looking figure. Hasbro darkened the color palette from the original figure so instead of sea foam green he's now wearing dark green and grey. Gung Ho still has a large tattoo on his chest (it's different now, as the Marine Corps logo that the original used is copyrighted or something) and he's still sporting just a vest, though this vest is much more armored looking. 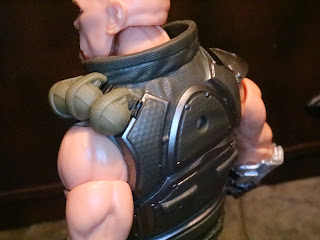 * The vest really is quite detailed. It's also easily removable so you could swap it out if you felt so inclined. I like the grenades on his shoulder. I do wish they were removable (that would have been awesome) but they are a different color and molded separately from his vest, so that's a nice touch. 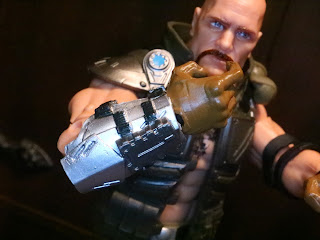 * Gung Ho has one of the communicator devices that almost everyone else has on his right shoulder and an armored forearm guard on his right forearm. The armored guard has an extra magazine on it for Gung Ho's rifle, too. How convenient! 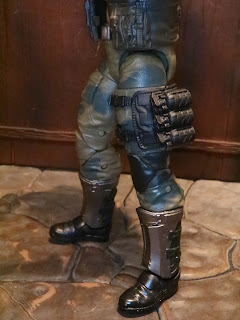 * Gung Ho's boots are quite cool, the camouflage pattern on his trousers looks excellent, and the removable grenade pouch on his left hip gives him some additional ordinance if needed. 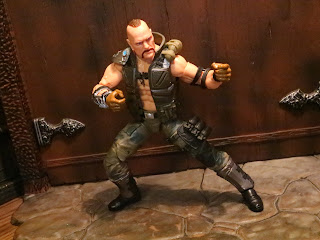 * Gung Ho has the same articulation scheme as the rest of the figures in the line and it works great. He's very durable and moves very nicely. The articulation system really is nicely on these, allowing Gung Ho to hold his weapons with both hands. His articulation is largely unrestricted, so he's a very mobile figure that you should have a ton of fun with. 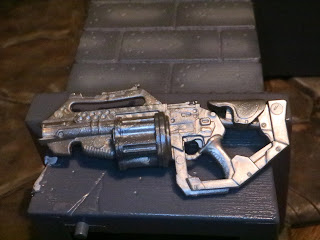 * Gung Ho comes loaded with guns, the first of which looks like a grenade launcher with a drum magazine. The vintage Gung Ho came with a grenade launcher as and many variants of the character have included them, too. This weapons strikes an excellent balance between looking like a futuristic weapon and a real world firearm, so I'll take it. I think it's modeled after the Nerf Ultra One. It's a bit tough to get in Gung Ho's hands but it looks great and he grips it well. 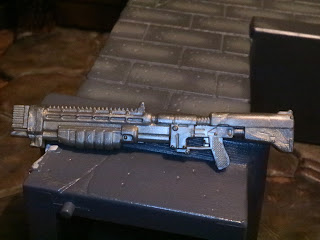 * Next up is a firearm that looks like a shotgun of sorts. Again, it looks futuristic but also recognizable enough to seem like a real world weapon. The barrel is strange, as it has kind of a grid rather than a barrel, but otherwise it looks really good. It kind of looks like one of the shotguns from Halo, doesn't it?. Heck, it looks almost exactly like it. 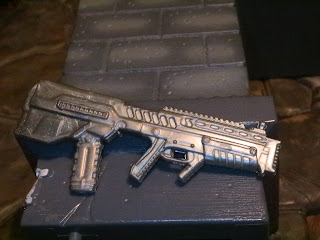 * Lastly Gung Ho comes with a bullpup styled assault rifle. Again, the mixture of real world aesthetics and a futuristic feel works here. The detail is great here and I love the fact that the magazine kind of matches the magazine on his forearm piece. It's a bit tough to get him to hold this one with two hands since it's fairly short, but you can kind of make it work with some effort. 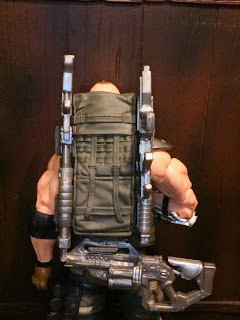 * Gung Ho has a large backpack. It's quite simple with just pouches and straps on it though it does have an amazing texture on the "fabric" itself. The coolest feature is that the backpack can hold all of Gung Ho's weapons. The shotgun clips to the left side, the rifle clips on the right, and the grenade launcher can hang from the bottom. The weapons can come loose but overall it's a very cool feature and works fairly well. I really like how the figures in the Classified Series can stow all or most of their accessories on their persons. It really adds to the tactical aesthetic of the line. 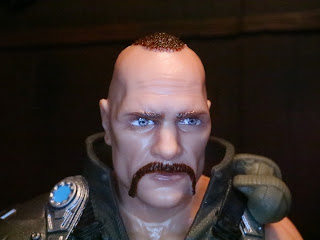 * This is probably going to be an opinion counter to many others but I'm not loving Gung Ho's headsculpt. There are parts that are really good, like the high and tight haircut and the eyes. There's something about the expression that seems off, though. Is Gung Ho upset or sad about something? He looks like he's pouting rather than ready to stomp some Cobras. 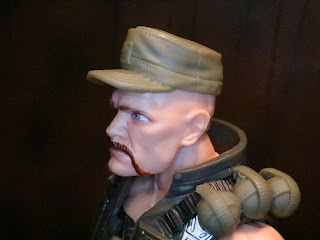 * My second problem is with Gung Ho's hat. It just doesn't fit on his head. Yeah, it's a different kind of hat than the original had, but that's not a big deal. It's the fact that the hat is too small and I just cannot get it to stay on his head. If you are just posing him on the shelf it should be OK but if you plan on picking him up and messing around with him the hat is definitely going to fall off. 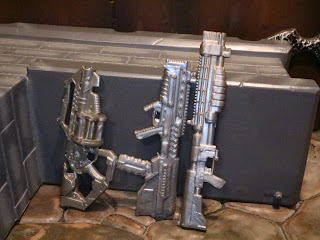 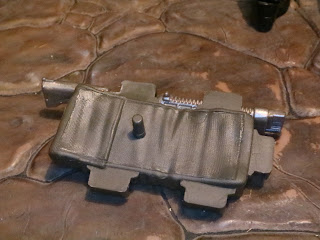 * Gung Ho's backpack is fairly heavy, especially when it's laden with guns (or blasters, as the G.I. Joe team is intent on calling them) and, unfortunately, it tends to fall out. The peg feels like it could be a bit tighter to keep it on Gung Ho's back a bit more securely. 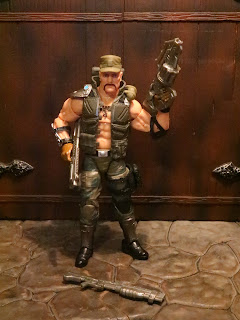 Gung Ho is disappointing. He's not a bad figure by any means but his headsculpt just doesn't impress me (and it totally feels like it should) and his cap just keeps wanting to fall off. His weapons are great, though, and he comes with quite a few accessories, especially if you count all of his extra stuff like his elbow pad and the pack of grenades. He's still a Great figure but I was really expecting him to be one of the slam dunks of the year.

The G.I. Joe Classified Series is a cool line and it seems that Hasbro may have underestimated its popularity. The various exclusives have been notoriously hard to acquire and even the standard figures can be tough. Mix in the underproduction with the fact that Hasbro has probably had to delay many figures that were set to tie in with the now delayed Snake Eyes movie and you've got a popular line that seems like it could be on shaky ground. The next series isn't slated to come out until January or so with only two new Target exclusive figures, two standard figures, and some repacks of Scarlett and Roadblock, who are the easiest figures to find in the line.

This is the first figure of Gung-Ho I've reviewed on the site. For more figures from the G.I. Joe Classified Series check out the following: