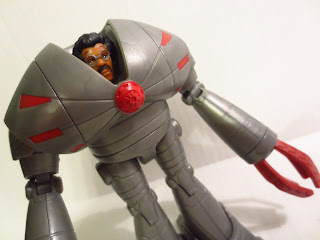 I'm really loving the new TMNT series on Nickelodeon, especially the appearances by Baxter Stockman. While my initial thoughts of Baxter Stockman will always be of the mutated fly man from the vintage Teenage Mutant Ninja Turtles line, the new series has done a nice job of adapting Stockman's appearance in volume 1 of Kevin Eastman and Peter Laird's Teenage Mutant Ninja Turtles comics by Mirage and making him both a menace and comic relief (actually, my favorite version of Baxter is probably his appearance in the ongoing IDW comic series).  Anyways, Snakeweed was the first figure I found in the fourth wave of TMNT figures and Leatherhead was the second, but Baxter took me a bit longer. He's presented here in his battle armor from the season 1 episode "I Think His Name is Baxter Stockman". Ready for a look at this guy? Join me after the break.... 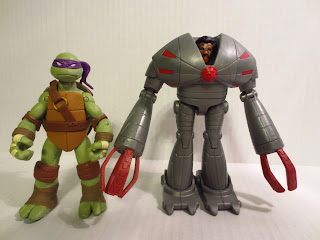 Baxter's done in the same animated style of the other TMNT figures based off of the Nickelodeon cartoon.  He's about 5 1/4 inches tall which is on the larger side for this line, but still seems undersized. Remember, Playmates isn't using a true scale with this line; larger and smaller characters are generally all made so they're within a few inches of each other. I'm sure the main reason for this is so that all of the characters can be sold at the same price point and as time goes by I'm not really bothered by it. Your mileage may vary. 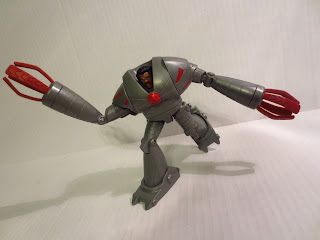 Articulation has been really varied in the TMNT line. Some figures, like the Turtles themselves, have been very highly articulated. Other figures, not so much. Baxter actually has quite a bit more articulation than you realize at first.  He features: hinged knees, ball jointed hips, a swivel waist, swivel shoulders and ball jointed shoulders, hinged elbows, swivel wrists, and a swivel neck.  You might be confused when I said that Baxter has swivel shoulders and ball jointed shoulders.  Take a look at the picture on the side: Baxter's suit has swivel joints on near where his shoulders would be and then further down, where the mechanical arms are, he has ball joints. I'm really happy with his articulation and would be thrilled if every TMNT figure had this amount of articulation. He's actually much more articulated than most characters in the line.  No QC issues detected at all. 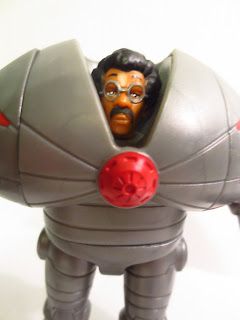 At first I wasn't sure about the sculpt, but over time I've come to really like it.  It's essentially a guy in a robotic suit of armor but there are some cool details here. First, I'll comment on Baxter Stockman's head sculpt. It's comical and matches the source appearance with his stache and round glasses, something different for this line.  The suit of armor has lots of of sculpted armor bands all over it and some cool lines that give the impression of segmented metal (such as the claws on his hands).  On the center of his chest is the T-Pod that Donatello made which Michelangelo lost and Baxter re-purposed to create his armor. 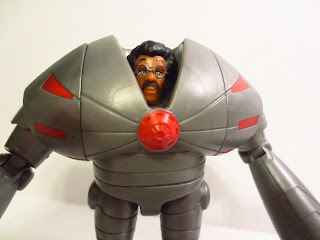 The paint's simple, but effective. Actually, most of the figure is molded in a dark silver color with some red highlights on the chest and T-Pod.  The head is painted very neat and cleanly with no slop whatsoever. Not much paint, but what's here looks good. 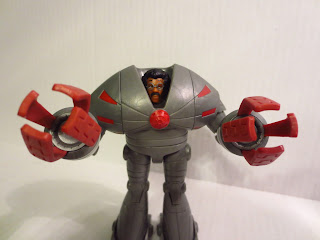 Baxter Stockman doesn't come with any traditional accessories, but the feet of his suit do come packaged separately.  They're a one time attachment and once you get them on, don't take them off. They do make him a little taller.  His claws provide some nice offensive weaponry, but I do wish that perhaps they T-Pod was removable or that he came with a Mouser. 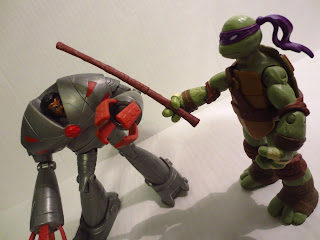 Baxter Stockman is actually one of my favorite figures in the TMNT line. He's got a good sculpt, solid paint apps, and some excellent articulation.  I do wish he'd come with some accessory, though, and he could stand to be just a bit larger. I'm giving him a good and a 1/2 overall.  He's really fun and definitely one of the figures I gravitate towards the most to pick up and play around with.  He's starting to show up more in stores, so if you're patient you'll find him.
Posted by Barbecue17 at 11/25/2014