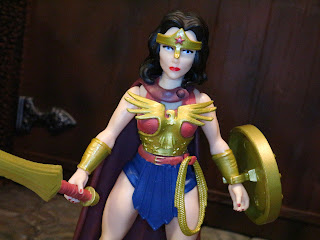 I'm currently on a roll trying to review the rest of series 1 of Funko's DC Primal Age toyline and I'm finally getting around to checking out Wonder Woman. The fourth of the series 1 heroes, Wonder Woman is actually one of the coolest figures in the line. Since Princess Diana is already a magical/ fantasy based character who tends to wear armor and use a sword and shield her redesign isn't as drastic as some other characters in the line. Still, it works and we've received another really good Wonder Woman figure. Ready for a closer look at this incredible barbarian/fantasy version of Wonder Woman? Then join me after the break... 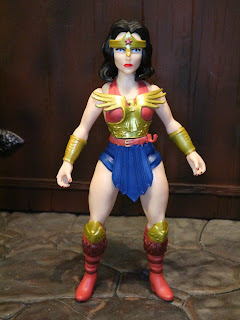 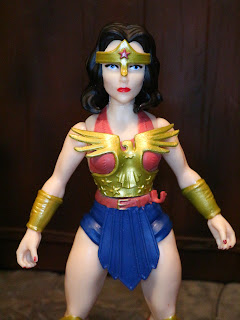 * Wonder Woman looks really, really cool . While she is still absolutely 100% recognizable as Wonder Woman, there are still elements of the design that bring something unique to the table, particularly the larger eagle emblem on the chest and the longer armored loincloth. Heck, even if you're not into the barbarian/fantasy vibe of the Primal Age line, this is still just a really good Wonder Woman figure with a bit of an old school feel. 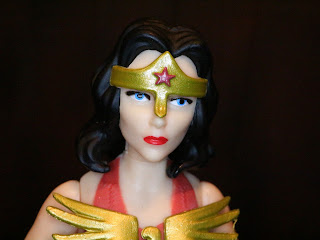 * I like the headsculpt. While it's a bit nicer than what you would have seen in a true 5.5 inch 1980s line, it still feels like it could belong. The paintwork is quite nice and clean and Wonder Woman's tiara is pretty slick looking. I actually like how there's an armored plate that hangs down over her brow covering her nose. 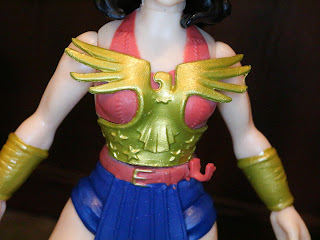 * The armor is nicely done and actually extends off of Wonder Woman's chest. It feels like a separate piece, although it certainly isn't removable. 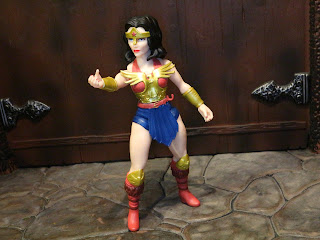 * Wonder Woman is definitely built quite similarly to Teela or Evil-Lyn from Masters of the Universe figure or any other similar barbarian fantasy figure from the 1980s, although his hip joints are more traditional ball joints rather than the rubber banded legs of the vintage MOTU figures. I know the Amazon releases of the DC Primal Age figures had some extremely widespread breakage issues with the hips but the Target releases from 2019 seem quite sturdy. 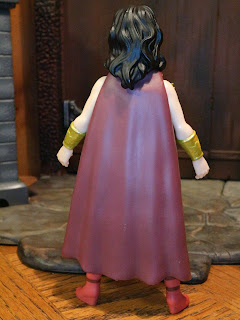 * Wonder Woman's cape is removable via a small clasp around her neck. It hangs down really well and looks very good on the figure. The cape is a bit more maroon colored, much different than Wonder Woman's top and boots, but it really complements the brighter colors of her outfit. 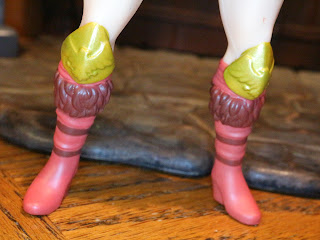 * Wonder Woman's boots absolutely remind me of Teela's boots from MOTU but you've also got some very cool knee pads with an eagle on them. 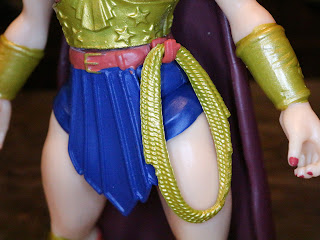 * Not only does Wonder Woman include her Lasso of Truth, which looks pretty solid, but she also has a clip on her belt so that the lasso can hang on her left hip. 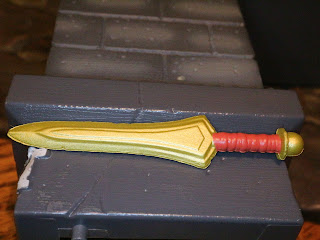 * I love this sword! It is a bit shorter than other swords in the line but it looks very wicked and seems perfect for some close quarters battles. It's definitely more fitting for Wonder Woman's personality than some massive, unwieldy sword. 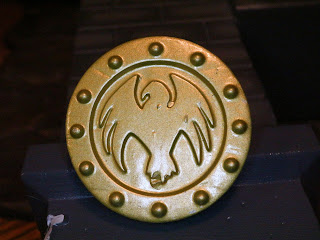 * To go with the sword is a very cool sword with an eagle emblem on it. It snaps onto Diana's wrist well and seems like some heirloom of Themyscira passed down over the years. 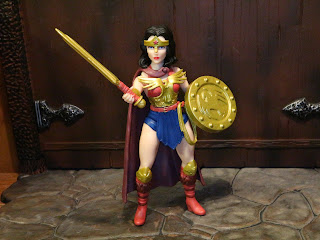 You know what? Wonder Woman is probably one of the best figures in the line, if not the best. I just really like her not just as a MOTU inspired DC figure but simply as a really cool retro inspired Wonder Woman. She has a great sculpt, great paintwork, and some really cool accessories. I'm hopeful that at some point Funko will release some more female figures in the line. While there are no female figures for series 2, I'm really hoping Funko moves forward with a third series and offers up some more characters. Wonder Woman is an Epic figure and hopefully the first of many female DC Primal Age figures to come.