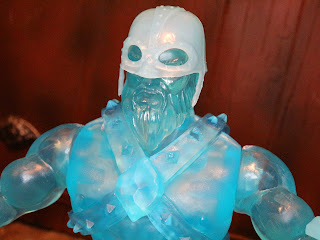 OK, I promise! This is the last 2018 I'm I'm reviewing before I jump in and start releasing my best of 2018 lists! Over the weekend I reviewed a few DC Primal Age releases and today I want to throw out one more: Mister Freeze in Ice Mode. While the actual figures I've purchased have all been the new 2019 releases from Target (they're sturdier with better QC), Mister Freeze in Ice Mode was exclusive to NYCC 2018. Apparently, he was a free giveaway. That's crazy, right? I only paid about $10 bucks for him so he doesn't seem to be terribly difficult to come by, which was a welcome change considering convention exclusives can be crazy pricey. Let's check out this solid blue Mister Freeze after the break... 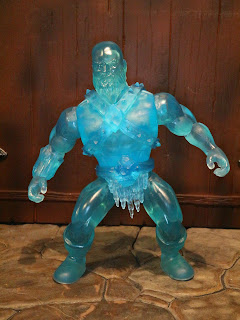 Accessories: Sword, shield, helmet, claw, and a coin of protection.

Non-Scalper Price: Technically he was a free giveaway at NYCC 2018. 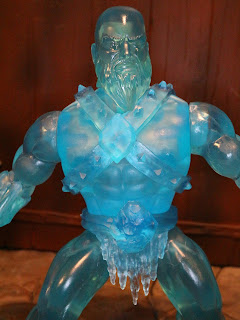 * While I've reviewed the beasts and the Castle Grayskull like Batcave, Mister Freeze is the first figure I've reviewed from this series. If you've ever played with a vintage Masters of the Universe figure, you have a good idea what you're going to get here: Muscles, a loincloth, and funky armor. To redesign Mister Freeze to fit into the barbarian fantasy world of DC Primal Age, he's been given a translucent blue body, a spiked harness, and a loincloth that looks like icicles. I really like the style of these figures and this Ice Mode version of Freeze really fits the character well, helping him to really stand out. 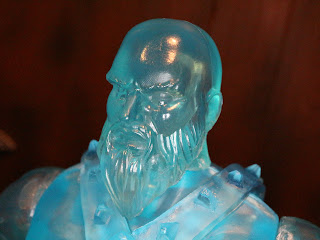 * The headsculpt is tougher to really get a feel for since it's translucent but it really looks like...Cal? Hey, yeah! I think it's supposed to be Cal from Calvin's Canadian Cave of Cool! That beard is definitely fierce, isn't it? 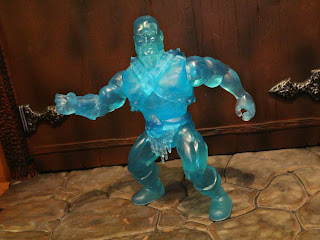 * Mister Freeze is definitely built quite similar to a Masters of the Universe figure or any other similar barbarian fantasy figure from the 1980s although his hip joints are more traditional ball joints rather than the rubber banded legs of the vintage MOTU figures. I know the Amazon releases of the DC Primal Age figures had some extremely widespread breakage issues with the hips but I haven't had any problems with my Mister Freeze. 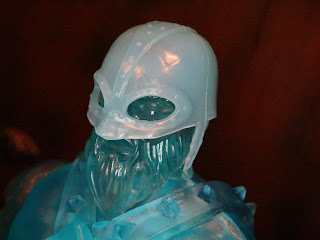 * Perhaps as an homage to Mister Freeze's traditional dome, the Primal Age Freeze wears a helmet. It's made from a thinner plastic and fits over the figure's head quite well. It's a bit loose but it displays well and definitely has the feel to it of something you would see in Skyrim. 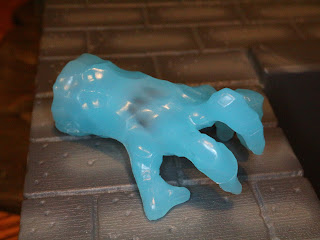 * Mister Freeze comes with a couple of weapons, the coolest of which is probably this massive ice claw. Whether this is an ice construct that Freeze has formed using his ice powers or is some sort of weapon he carries, it's pretty savage looking. It snaps over his left hand quite easily and is cast in a cool blue plastic. 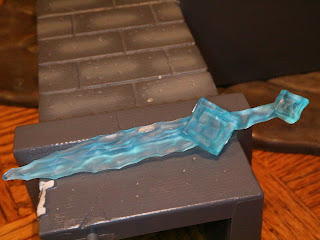 * Freeze also comes with a short sword that looks like it is either made of ice or has been frozen over. The blade has an interesting texture to it while the hilt and pommel have a diamond shape to them. 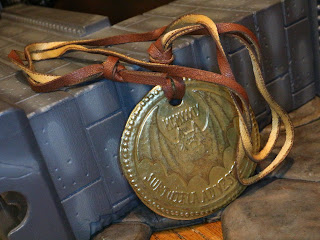 * What may be the coolest accessory is this metal "coin of protection." I have no idea if this plays a role in the DC Primal Age comic (I haven't got my hands on it yet) but I love it. It reminds me of the Warrior's Ring that came with the vintage Trapjaw and Tri-Klops figures. It is made of metal and comes on a leather-like (but probably pleather) cord. On the front is a giant bat, 1939 in Roman numerals (the year of Batman's first appearance), and the Latin phrase "SUB TUTELA AD VESPERTILIO" which means "Under the protection of the bat." 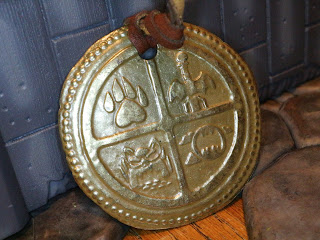 * On the back is an image of a paw (probably the paw of Ace the Bathound?), the hilt of Batman's sword, a bat signal in the sky, and the Batcave itself. I'll be honest: This is the kind of item that I would have picked up in its own if it had been sold at a comic convention or a renaissance fair. It's metal, detailed, and just really, really cool. This is a great little extra that will just be cool to have in general. 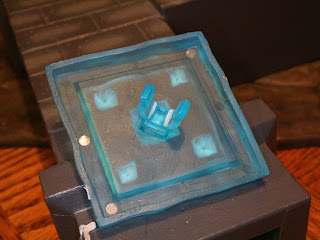 * Mr. Freeze comes with an average looking shield that, unfortunately, is already starting to break. The shield attaches via a clip that should fit over the wrist of the figure. I put it on the figure on time, however, and I can already see some extreme stress marks in the plastic forming. That sucks. Super7 needs to text the plastic or redesign the shields. 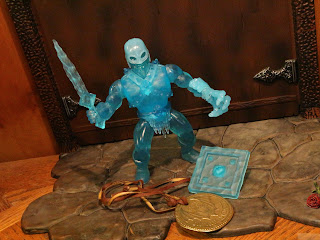 I really like this guy. Quite a bit. definitely way more than I should. I mean, if you got him free then he's the deal of the year. Even if you purchase him on the secondary market and only pay between $10 and $20 bucks for him you're still getting a pretty solid figure. If you like the style of DC Primal Age and the overall Elseworlds like concept, then these are for you. If not, just move on! The figure on his own would be pretty impressive, especially considering he was given away free, but factor in that sweet coin of protection and you've got an Epic figure that is a pretty unique release.

For more DC Primal Age reviews from Funko, check out the following: