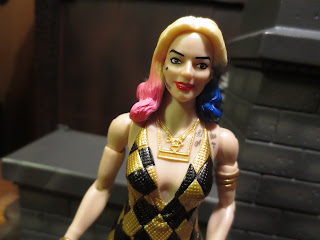 Ready for another Harley Quinn review? Well, that's what you're getting today! As of this writing I have yet to find series 2 and the Toys R Us exclusive Harley Quinn from Mattel's Suicide Squad line but I did manage to get the Amazon exclusive Harley Quinn seen here. I preordered her back in mid-July (preordering action figures is so convenient and any company or retailer who doesn't give collectors the option needs to be forced to eat a Constable Zuvio figure out of spite) and received her in early-mid August. This outfit is from one of Harley's flashback scenes in Suicide Squad and doesn't get a lot of screen time. It figures prominently in advertising, though, and is a pretty unique look for the character, so it's a cool exclusive for an online retailer to offer. Let's take a closer look at Harley Quinn in her fashionable gold dress, shall we? 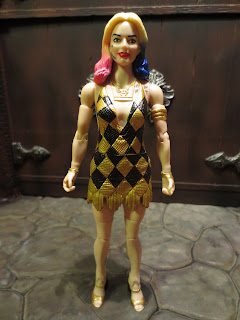 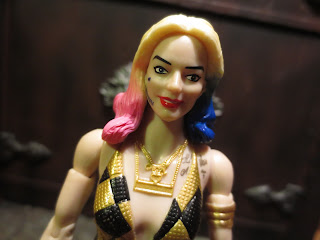 * While I'm not sure that this sculpt is "Margot Robbie as Harley Quinn" is definitely is Margot Robbie's Harley Quinn. Make sense? I'm not sure it's a perfect likeness but it's a nice looking sculpt and conveys the character well. The expression works, the paint is really clean on the eyes and lips, and the little tattoos are excellent. Also, notice the paler skin. That's a nice detail that seems like it could have been easy to miss. 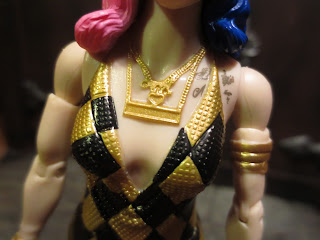 * The tors has a lot of nice detail, particularly on the dress. I love the studded pattern Mattel crafted here. Harley's necklace also is nicely sculpted here. She has plenty of visible tattoos, all of which are neat and cleanly applied. Mattel has done great work on printing tattoos in their WWE Elite line and they've done an admirable job on the Suicide Squad figures as well. 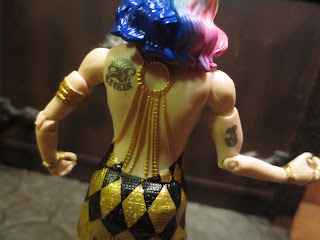 * Here's a quick look at the elaborate back of Harley's dress. It's pretty flashy, no? The paint work is quite neat on this figure as all of the small gold chains and straps are really captured quite well. 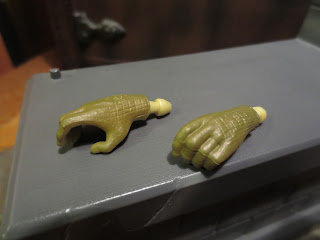 * Harley comes with Killer Croc's hands since she rips them off of his arms in one of the final scenes of the film.....

Just kidding. They're build-a-figure parts for an alternate Killer Croc build. If you buy the six retail figures you can build a regular Croc without his hoodie on but with wrapped hands. This store exclusive figure gives you the chance to have a plain handed Killer Croc. It's a small extra, but an extra nonetheless. 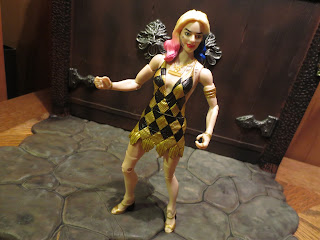 * The articulation on the Suicide Squad figures has been pretty average at best. We're getting lots of unique sculpts but weaker articulation than we saw with DC Universe Classics. I think I would have been OK with less articulation here and a better sculpt or more useful articulation, but this figure just kind of falls in the middle. She has what you'd expect but it feels and looks kind of gangly. 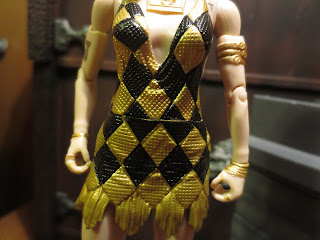 * Due to the waist swivel and some odd sculpting, the diamonds on Harley's dress just don't match up quite right. It looks kind of odd the more you look at it. I really think Mattel should have figured another way to execute the dress to make it look a bit sleeker and better tailored. My thought would been to sculpt the full dress as part of the upper torso and have the legs attach underneath. It would have given less articulation but a better overall appearance. 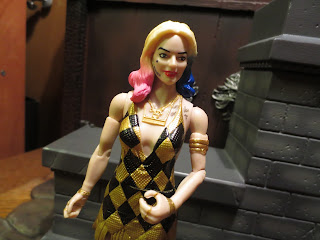 It's very cool that Mattel and Amazon offered this version of Harley Quinn as an exclusive. She's a decent figure with a very cool and unique outfit. Unfortunately, the articulation here isn't rendered well enough to make this figure looks as impressive as she should be. This is really one of those cases where a more classic NECA or McFarlane approach (less articulation, better sculpt) might have looked better. Harley's a Good figure and is definitely going to be a draw for Harley Quinn's hardcore fans (of which they are plenty) but, even with the inclusion of the rather unnecessary unwrapped Killer Croc hands, this is something that most casual fans and collectors can easily skip.