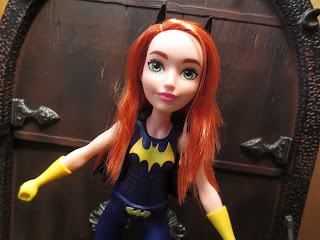 Today I'm looking at a fairly recent release from Mattel's DC Super Hero Girls, a line of superhero action figures and dolls marketed towards girls similar to popular lines like Monster High. These released earlier this year as a time-limited exclusive to Target but have now made their way to stores everywhere. They seem to be doing really well as they offer a great group of fantastic toys at a few different price points. The 6 inch figures are traditional action figures while the 13 inch figures have rooted hair and actual cloth outfits. To sort of create a mid range product and appeal to folks looking for something on a lower budget, Mattel has released some new Super Hero Girls that are built more like traditional action figures but retain the rooted hair and scale of traditional fashion dolls. This range seems to be limited to Batgirl, Supergirl, and Wonder Woman (so far, anyways) and features the ladies in their training outfits. Being a collector of nearly everything Batgirl I just had to snag this one for the collection. Ready for a closer look at Training Outfit Batgirl? Then join me after the break... 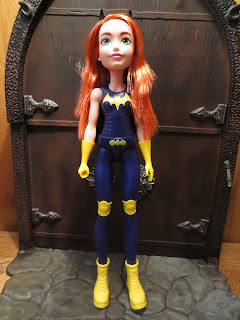 
* The DC Super Hero Girls are really sturdy, durable toys that are definitely designed with kids in mind. While she has the "style" of a doll, she's built like an action figure with an excellent ball jointed head. I have some problems with the articulation setup (I'll get to those in a minute) but overall I'm pleased with this. Mattel is really packing in a nice action figure for around $10 here. 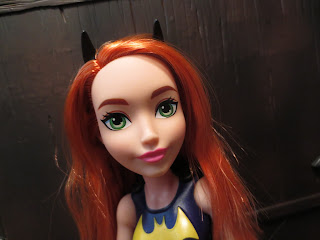 * The headsculpt is fantastic and has a lot of character to it. It looks very similar to the previous 12 inch Batgirl figure but I'm pretty sure that the hair is different and the head might be slightly larger. Great paintwork on the eyes and a great hair color selection really works to make this an excellent Barbara Gordon likeness. 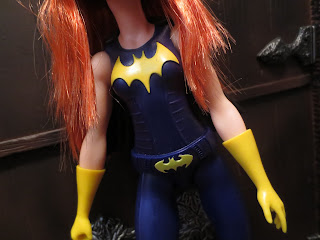 * This is Batgirl's training outfit and it's a sculpted part of the figure. It's kind of cool, though, and has some texture to it to give off the impression that it might be made of a material similar to something like Under Armor. The paintwork is neat and clean as well. I love the purple and yellow color scheme. 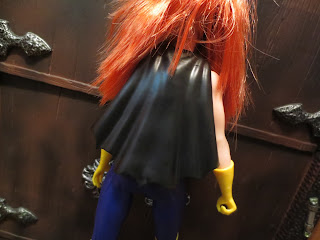 * Possibly just to help with her training Barbara does have a cape on. It's a separately molded piece that hangs down her back but it definitely isn't removable. This outfit kind of reminds me of what Batgirl might where if she were a wrestler. 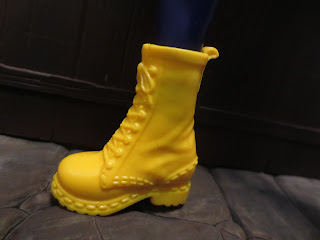 * I love that this version of Batgirl also has the clunky yellow boots! I love the boots! They seem so much more practical for crime fighting than anything with a high heel and they're inspired by the excellent Babs Tarr and Cameron Stewart Batgirl redesign for the New 52's Batgirl of Burnside. 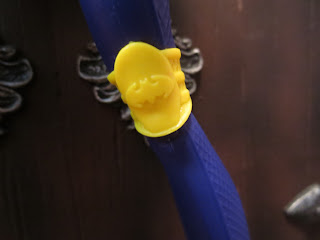 * I love the batsymbols on these knee pads.. The knee pads both look cool and serve to hide the swivel/hinge joints. 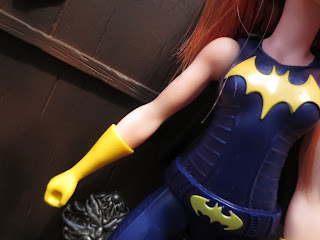 * I'm a bit disappointed by the limited arm articulation Batgirl has. Not only does she have no elbow or bicep articulation but the fact that she even lacks swivel wrists (when there is already a perfect sport for them at the end of the glove) is a major downer. It does hamper her playability quite a bit. 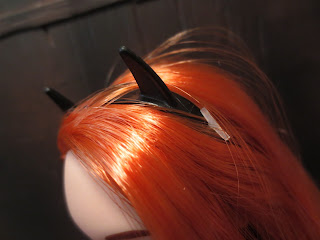 * While training Batgirl isn't wearing a mask of any type she does have a headband on that has some bat ears sticking up. I wish they were a bit longer as they're not very visible through her hair. Secondly, why are they attached to her head via a plastic cord. You can easily cut these but it seems like the headband would just fall off in the slightest breeze. Maybe an accessory that just fit better would have been a better choice. 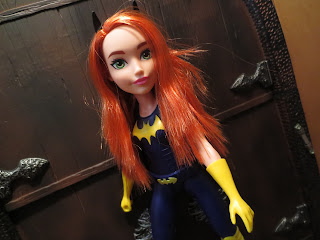 Considering that this is only a $10-$12 figure, it is world better than anything else in the price point. This is a cool doll that I'm sure any girl (and maybe even boy) who likes superheroes might appreciate. She's a great mixture between the action figure and doll aesthetic and provides an impressive toy at a lower price point. I do wish she had an accessory or two and some more arm articulation, but the great portrait, price, and hairstyle more than make up for those shortcomings. This is a Great product and should prove to be a pretty popular toy from a line that seems to be getting more and more attention by the day.


I've actually reviewed a few other figures in this series, including:

If you want more Batgirl reviews, check out my virtual Batgirl museum!
Posted by Barbecue17 at 8/11/2016