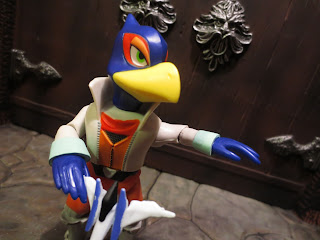 While I did stumble upon a couple of series 2-2 figures at my local Wal-Mart (still looking for Princess Zelda, Skull Kid, and Slippy Toad) I had ordered my series 2-1 figures from BBTS and received them a week or so ago in my pile of loot. I'm going to be reviewing these over the next week or so and the first one I'm looking at is another member of the Star Fox team, Falco Lombardi. When Fox McCloud was released last fall I was really hoping that we'd make it to the point where we received the entire original team in World of Nintendo. Well, it now seems we're getting close: Fox and Falco are out, Slippy is currently shipping as part of series 2-2, and series 2-3 was shown at SDCC to include Peppy Hare! Another team nearly complete! Of course, we're still waiting for everyone to arrive so let's go ahead and check out the Star Fox team's resident bird of prey, Falco Lombardi, after the break... 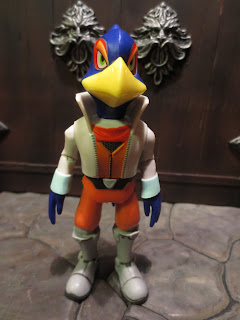 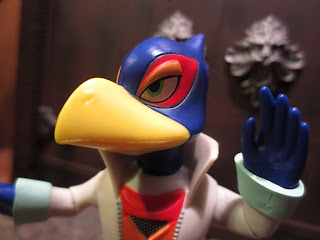 * Over and over again I've applauded Jakks for taking on a difficult task: Creating a unified action figure line based on Nintendo's diverse roster of uniquely shaped and designed characters and making them look accurate while still striving for uniformity. Falco looks good. I love his cocky, smug expression. He bright, colorful, and fits in great on the shelf. The World of Nintendo figures just look so good together! 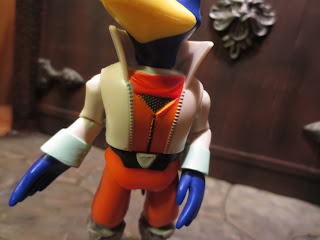 * Falco's jacket is really cool, as is the flight suit he has on underneath. It's colorful and cool and really adds to the Nintendo vibe from this guy. 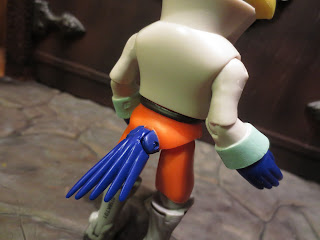 * Like Fox, Falco also has an articulated tail. It's a simple hinge joint but it works well and adds a bit more character to the figure. 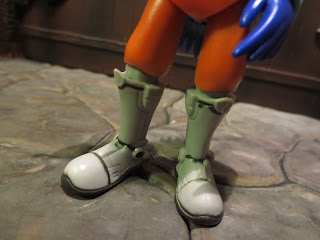 * Falco is sporting some killer boots. They are very similar to Fox's (but taller) and have some darker paint details that really elevate the overall appearance. I long to live in a world where I can where high-tech looking space boots and not be judged. 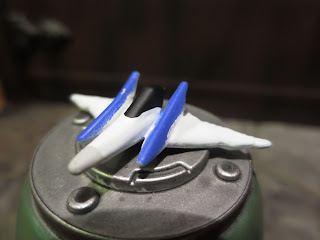 * Like Fox McCloud, Falco also includes a small scale replica of an Arwing ship from the Star Fox series. It's an interesting little accessory and is fairly nicely painted. While a laser pistol (like in Super Smash Bros.) would have been cool, Falco can actually hold the Arwing since he has open hands (something Fox lacked). 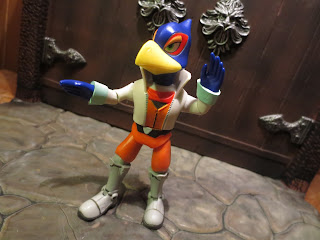 * Falco's articulation is just really stiff overall. On paper there is a ton of articulation, probably more than most figures available at mass market retail. When you start to try to pose Falco, though, you'll see some real weaknesses. His arms are fine but his hips just don't want to move at all. It really renders most of the leg articulation useless. 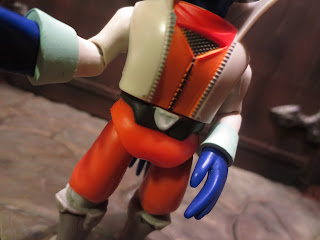 * Maybe this is why his hips don't work that well and maybe it's not but what in the world is up with Falco's crotch? It looks...really, really odd. I'm not an expert in the crotches of birds of prey or anything but doesn't this almost look like it should be his backside? This is really odd looking for some reason and I just can't put a finger on it. 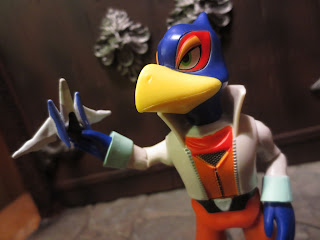 Like his teammate Fox McCloud, Falco Lombardi is a Good and a 1/2 figure. He's not an incredibly impressive action figure on a technical level but the character and colorful execution of the toy definitely help to make this a pretty cool collectible for Nintendo fans. I'm guessing at this point that Jakks has gone deeper in the Nintendo well than any of us ever thought was possible back when the original series of Mario, Wario, Yoshi, and Link came out nearly 2 years ago. They're continuing to release an impressive series of toys that scratch an action figure itch no one else has ever tried to scratch before!

If you're interested in World of Nintendo, I have reviewed many other figures in this series, including: