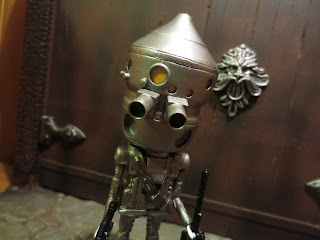 Today I'm looking at the second POP! figure from May's Bounty Hunter themed Smuggler's Bounty box that I received belatedly due to not-updating my debit card on file: It's IG-88, one of the six bounty hunters from The Empire Strikes Back. Surprisingly this seems to be the first POP! version of IG-88 that Funko has released and he's an exclusive to the Smuggler's Bounty box. Ready to take a look at one of the most famous Assassin Droids in the galaxy? Then join me after the break... 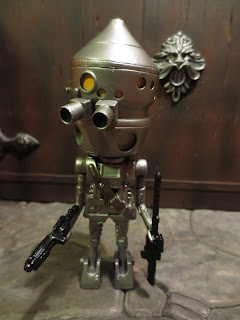 Non-Scalper Price:  $25 dollars as part of a set which also included a Boba Fett POP!, a Boba Fett patch, a Bossk pin, and a cool T-shirt with the Empire bounty hunters on it. 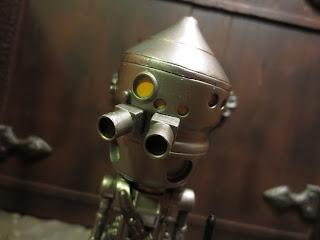 *While the POP! aesthetic typically involves human(oid) characters with small, dark eyes, it's always interesting to see how they handle something more unusual like a droid. IG-88 looks great and there's a lot of cool detail here. I'm not sure it's 100% accurate or anything but you should definitely recognize this guy. Plus, since he's technically a bobble-head, you could remove his head to make the drink dispenser at Chalmun's Cantina. 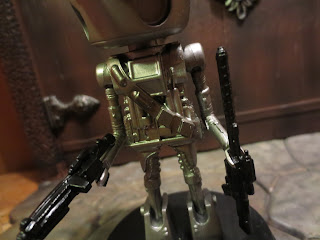 * The body sculpt is nicely detailed with lots of machinery and techy buts shown. IG-88's also rocking his bandolier filled, no doubt, with all sorts of death dealing items. The paint work is good; I think Funko nailed IG-88's color here. 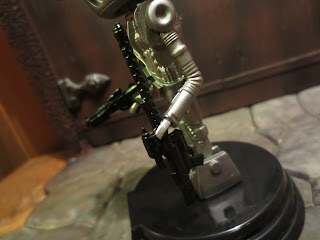 * IG-88 is armed with both of his weapons (a BlasTech E-11 and a DLT-20A) and he looks great holding them. The detail is pretty nice on them and he's even holding them pretty accurately to the way he holds them in Empire. 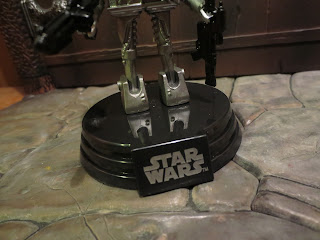 * IG-88 comes with a removable stand, which is cool, but it also is pretty necessary to keep IG-88 standing. Most other POP! figures don't come with stands so if you're trying to have some uniformity in your POP! display, you might have some difficulty getting IG-88 to stand on his own. 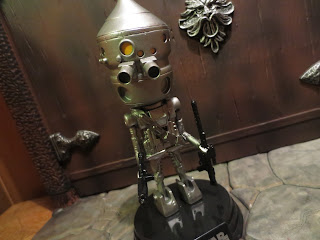 I find it kind of difficult to review POP!s as they're pretty much all good quality, stylized figures. It really ends up being a decision based on how much you like the character and how much you like the stylized look of the character Funko has gone with. Overall I love IG-88, so that's a big plus, and I think Funko nailed the likeness. My only problem here is that IG-88 can't stand on his own. He's a Great and a 1/2 POP! and, if you're a fan of the bounty hunters and POP!s, you'll probably want to pick this set up as soon as possible. Last I checked if you're a Smuggler's Bounty subscriber you can order older boxes at a 25% discount, meaning you get both IG-88 and Boba Fett for around $18. That's how I got mine and I'm not at all disappointed.

I actually have reviewed one other IG-88 figure on Action Figure Barbecue: The Black Series IG-88 from Hasbro.

I've reviewed a few other Star Wars POP! figures, too, including: