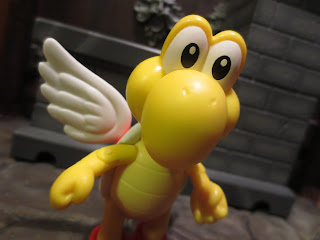 Today I'm looking at the 3rd figure in series 2-1 (the 6th overall) of Jakks Pacific's World of Nintendo line: Para Troopa. Yeah, that's what they call him on the packaging. Everything I've ever seen (including the Nintendo Wikia) calls these guys Koopa Paratroopas, so that's probably how I'll refer to him throughout the review. Along with Goombas, the Koopa Troopas and Paratroopas are the most common minions of Bowser's army and thus get plenty of screen time in the Super Mario Bros. series of video games. These guys first appeared in level 1-3 of the original Super Mario Bros. on the Nintendo Entertainment System when you come out of your first underground level and began traversing across a series of giant pedestals. Dang, now I'm starting to feel some nostalgia rolling in! Want to join in on the nostalgia train as we take a look at the Para Troopa? Then join me after the break... 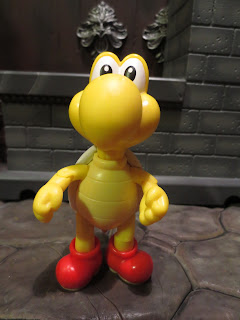 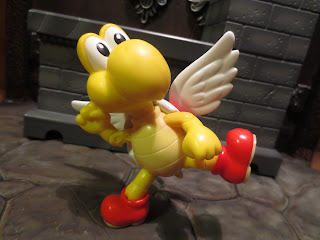 * For being a 3 1/2 inch figure from a non-collector focused line, the Paratroopa has some pretty decent articulation. The lack of a knee hinge feels weird but once you play around with the swivel/hinge ankles and hips, you'll be in much better shape. I like this little guy as he's just a lot of fun to mess around with. 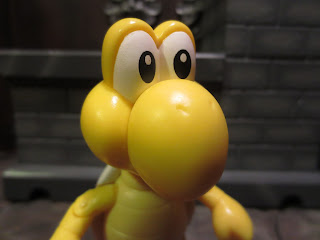 * He kind of looks like Yoshi, doesn't he? I really like the sculpt on the Paratroopa. Essentially, without the wings (they're removable) he's just a standard Koopa Troops. Keeping that in mind, Jakks just nailed the likeness. I love the somewhat friendly, rather harmless look to this fellow. There's a lot of beauty in the simplicity of some of these Mario characters and Jakks always manages to convey the simplicity really well in their sculpts. 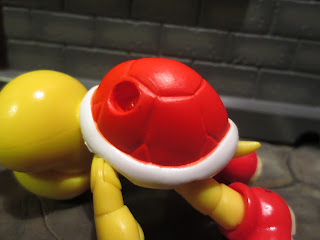 * While there are two holes in it (for the included wings which turn this guy into a Koopa Paratroopa) they don't come attached. They're also easily removable, leaving you with a standard red-shelled Koopa Troopa. This is pretty cool as you're essentially getting two different army builders in one. The shell is a simple sculpt (part of the body) but it works with the aesthetics of this line. 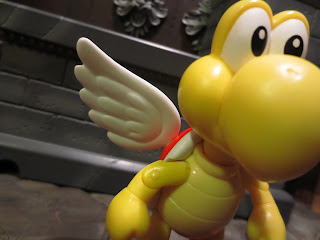 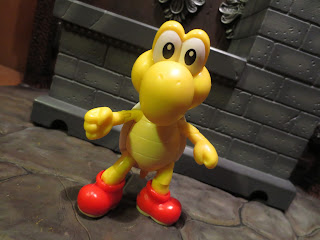 * My only real complaint is that I'm kind of disappointed that the Paratroopa doesn't come with anything else. I mean, the wings are a cool "accessory" but they're also integral to his identity as a Paratroopa. An extra simple red shell accessory would have been really nice. 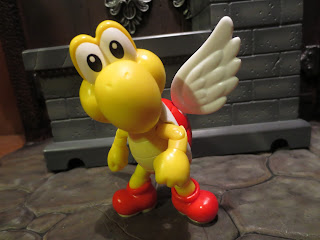 Considering how small he is, the Koopa Paratroopa really turned out to be a nice little figure. He's quite fun and definitely the highlight of Series 2-1 in my book. The ability to remove the wings is really well thought out as it does give this guy some versatility. He's a Good and a 1/2 figure. He's also a figure we're going to see again as Jakks has announced this Paratroopa with a green shell as part of the upcoming Series 2-3. If you're really wanting to build an army of Bowser's minions, Jakks has you covered it would seem. 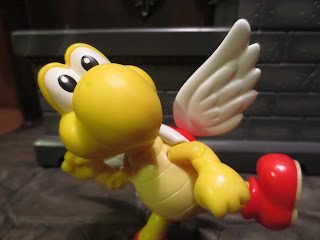 I haven't reviewed any other Koopa Paratroopas before but I have reviewed plenty of other World of Nintendo figures, including: