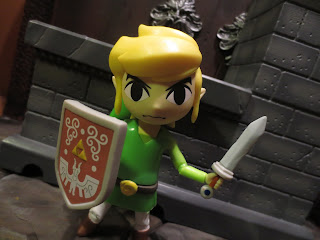 When Nintendo first revealed the screenshots of the new cell shaded "Toon Link" from The Legend of Zelda: The Wind Waker back in 2001, people were pissed (remember how everyone was calling it "Celda?"). After the world collectively went nuts over Ocarina of Time and Majora's Mask, it was hard to wrap one's mind around a version of Link that looked like a Colorform. Of course, when we finally got to play Wind Waker in 2003, it was insanely impressive and fun with some wonderfully unique gameplay elements. I loved the freedom of exploration the game had (even if the sailing segments themselves got a bit old). In the years since Toon Link has become a fairly popular Link variant and now Jakks has included him in series 2-1 of their World of Nintendo line. Ready for a closer look at this colorful, cartoony hero of Hyrule? Then join me after the break... 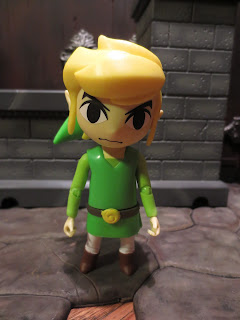 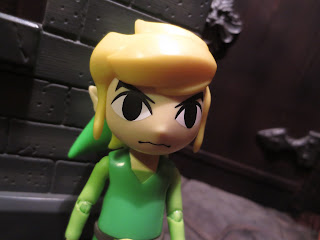 * One of the things that I always think Jakks does a great job of is making each figure in this series look unique while still still making the toys feel uniform. That's no easy task! This is a great looking Toon Link as he's styled very differently from the previous Link figures in this line (different proportions, too!). The big eyes, painted on facial details, and smaller body really capture the cell-shaded aesthetic that was big in the early 2000's. 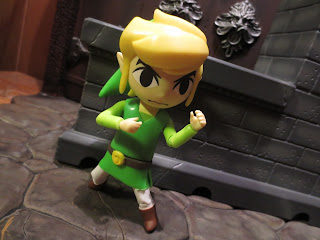 * For being a 3 3/4 inch figure, a unique sculpt, and an oddly shaped character, Link has a decent amount of articulation. He is fairly fun to pose and his arms and ball-jointed head give him quite a nice range of movement. The legs also move well and the bottom of Link's tunic has a cut made in it to help free up his hips a bit more. 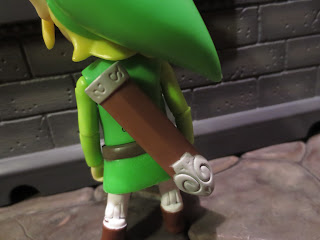 * Like the other Link figures in this line, Toon Link comes with a functional sheathe for his sword. It has a nice, if simple, sculpt and plug in securely. I didn't have much trouble with it popping out while playing with and posing Link, so that's definitely a plus. 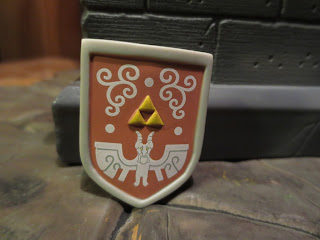 * Link comes with the Hero's Shield that he uses in the Wind Waker. The paint work on this is pretty nice and it adequately captures the artwork from the shield in game, which is given to Link by his grandmother before he embarks on his quest to rescue his sister, Aryll. 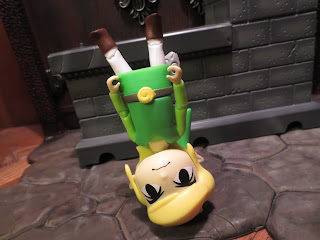 *It might be an unavoidable problem due to the character design but this Link action figure really has balance issues. I can easily balance him on his head, but stand him up right? That's pretty hard. His feet are tiny, his body is small, and his head is massive. I really wish this guy had come with a stand of some sort as getting him to stand upright is a challenge, if not impossible in many positions. 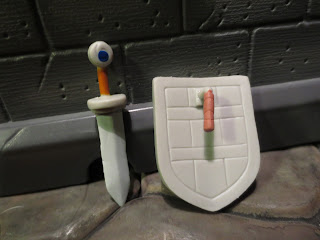 * I already showed off the front of the Hero's Shield (I like it) but now I'm showing off the back of the shield so you can see the handle and the Hero's Sword that Link comes with. They're both kind of disappointing because the entire Hero's Sword and the Hero's Shield's handle are both just really rubbery. They feel rather cheap and disappointing. Something a bit firmer really would have been welcome. Oh, and maybe including the Wind Waker, too. That would have been sweet. 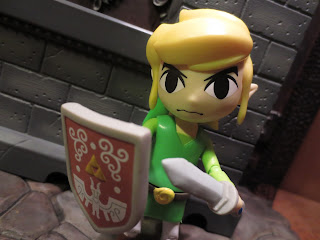 Toon Link isn't a bad figure at all. I actually like him better than the Ocarina of Time Link released earlier this year. He's not my favorite Link design ever but I love the execution of the design by Jakks. My biggest complaints are the inability to stand in all but the most vanilla poses and the rubbery weapons. He's a Good figure and, of course, it's not like there are that many Link figures out there. Legend of Zelda fans will be happy to pick him up considering his low price and he looks good alongside his other World of Nintendo brethren. Still, if you're looking for one Link from this line, get the original Skyward Sword version. He's still the best. 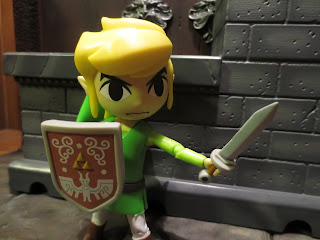 I've reviewed a couple of Link toys on here including a Link figure offered as a preorder bonus for Ocarina of Time back in 1998, the World of Nintendo Skyward Sword Link, and the Ocarina of Time variant of Link.

I've reviewed many other World of Nintendo figures, including: