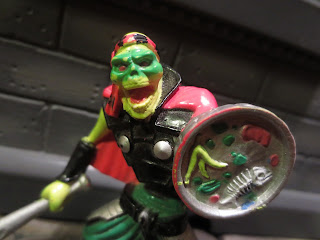 Ready for some more Minifigure Madness? Today I'm looking at another figure from the incredible Trash Bag Bunch toyline from Galoob. Released in 1991 these guys hit during the days of neon colors and environmental awareness and presented an epic battle between the environmentally friendly Disposers and the ozone destroying Trashors. Today I'm looking at Trasher, who is a member of the evil Trashors. Yup, the only difference in his name from the team name is the final vowel. Crazy, right? Let's check out this guy after the break... 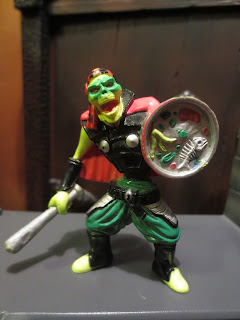 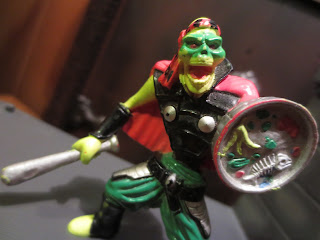 * I'm really digging this guy! He kind of reminds me of a knight, but an evil knight in a dystopian cyberpunk universe set in a nasty city. I love the skeletal face, the stylish armor, and the bandanna around his head. I also love his choice of weapons: A trash can lid instead of a shield and a baseball bat instead of a sword. 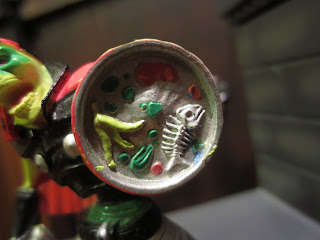 *  I love Trasher's shield! Look how cool and detailed this thing is with banana peels, fish bones, and other little bits of debris and trash. And the paintwork is pretty impressive, too. You can actually tell what each little thing on here is. This is just really impressive work, especially considering this is a 25 year old minifigure sold in a fake trash bag. 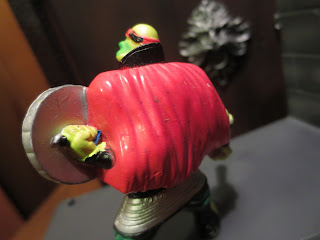 * Trasher is wearing a cape but it looks really awkward. The side is kind of strange and his arm just sort of comes out of it. Again, I know these are old minfigures and the time for true criticism may be long, long past, but I saw this and did think it was odd. 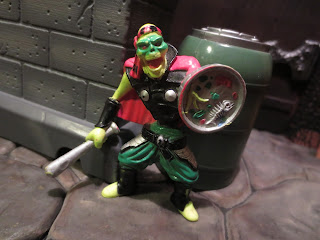 When I ordered this guy I was afraid he might be a little boring but, after getting him in hand, I'm really impressed by him. The creativity and detail that went into these little guys was truly impressive, even today. My little one and I have been playing with these a good bit lately and it's always fun to add another warrior to our battles. Lately the Trashors have been taking over a Disney Princess castle and the Disposers have to run them off. Oh, an the Disposers have a Wampa. The battles are intense and Trasher is going to be drafted into them right away!


I'm currently trying to complete my collection of Trash Bag Bunch figures. Currently, though, I've only reviewed a couple of other ones on here: