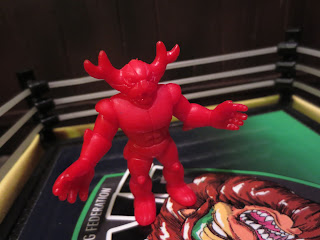 I've probably talked about my love of M.U.S.C.L.E. figures many times in the past but you know what I've never done? Reviewed a M.U.S.C.L.E. figure on this site! I recently acquired a few new pieces and I figured I'd start showing them off to up the minifigure love here on Action Figure Barbecue. Today I'm looking at figure #179, Black Buffalo. I remember back in 2003 one day when I was sitting in my dorm room and somehow started checking out M.U.S.C.L.E. figures. I was completely flabbergasted to learn that not only did each of these characters have names but that they were based on a long running manga and anime series named Kinnikuman. I'm pretty unfamiliar with it but I'm kind of trying to learn a bit more about it. Today I'm looking at Black Buffalo, a character who appeared in the 1984 Kinnikuman TV film Showdown! The 7 Justice Supermen vs. The Space Samurais. Black Buffalo is a member of the Black Emperor's Black Satan Squad who fights Terryman (the M.U.S.C.L.E. guy with "Texas" on his shirt). Now that you know everything I know about Black Buffalo, let's take a look at the figure, shall we? Join me after the break... 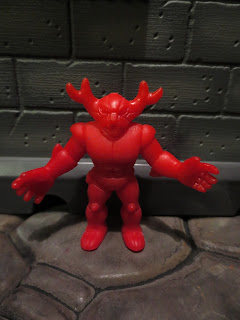 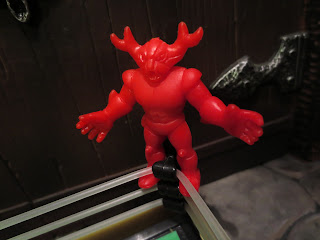 * Here is Black Buffalo in all of his M.U.S.C.L.E.y glory. I always appreciated that M.U.S.C.L.E. figures had fairly neutral poses and lent themselves well to standing all in a row or pulling off some inarticulate wrestling moves. With both hands down and open, Black Buffalo kind of looks like he's saying "Come get it!" He also has spikes on his knees (and one at the base of his neck) and could certainly use his antlers/horns to cause some damage. 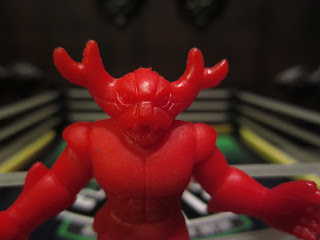 * I love his face. Red figures seem to be really tough to photograph so hopefully you can see the cool little details on his face. I'm digging his antlers and the way his head/helmet looks like it has segmented plating on it. Black Buffalo also has some wicked looking fangs. 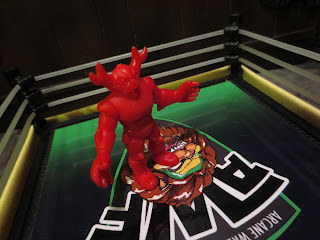 This is the first M.U.S.C.L.E. figure I've reviewed on this site! If you like seeing these guys reviewed, let me know and I'll try and look at more! If you like the ring, it's from the Mystical Warriors of the Ring line and can be purchased here!
Posted by Barbecue17 at 8/06/2016