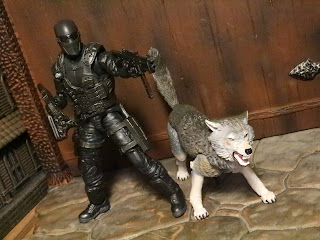 As far as I'm concerned this is the last 2021 G.I. Joe Classified Series review I'm doing. Yeah, some of the newer figures like the BAT and Alley Viper leaked out before the end of 2021 but since Hasbro Pulse just put those up this week I'm really considering them 2022 releases. I don't have them in hand yet, either, but I'll be reviewing them for sure. So for the final Classified Series review from 2021 get ready for Snake Eyes & Timber: Alpha Commandos! This 2-pack has slowly been making its way out and mine arrived from GameStop shortly before Christmas. This is the fourth Snake Eyes figure in the line so far but this time he's based on the original v1 figure from 1982, usually referred to as Commando Snake Eyes. Of course, Snakes is also joined by his pal, Timber, who came with the v2 Snake Eyes release that showed off more of Snake Eyes' ninja side. So whether you keep these two together or mix and match, this is still a pretty impressive set. Hasbro seems to really be focusing on the animals in this line as we have Timber, Spirit Iron-Knife's eagle, Freedom, and Croc Master's crocodile coming soon. Most folks really liked the Dungeons & Dragons Drizzt & Guenhwyvar set from last year and I'm curious if Hasbro will be able to reuse her body for any animal companion? Let's take a look at Snake Eyes and Timber after the break and see if these Alpha Commandos really are the top dogs... 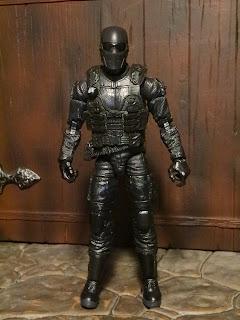 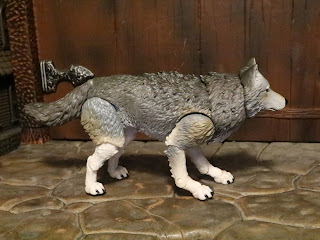 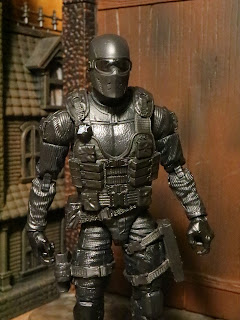 The Positives:
* Snake Eyes is largely made from previous pieces (Duke's legs and the upper body of Beach Head) with a few new elements, most noticeably his tactical vest that is loaded with pockets. Since wearing all black is kind of his thing Snake Eyes is pretty much just cast in black and very, very dark gray plastic. It looks great, though, and gives him a very intimidating appearance. He's even got a black grenade on his vest with the G.I. Joe star on it. 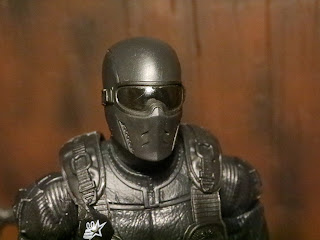 * The headsculpt is excellent and probably my favorite part of this figure. Snake Eyes' head gear almost looks like it's a molded piece, providing more protection than just a hood or balaclava, and the goggles are nice and shiny. 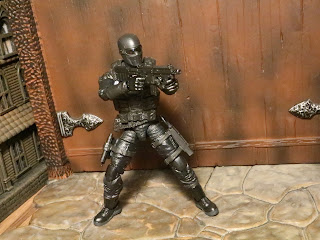 * Like the rest of the Classified Series the articulation is really nice and incredibly useful in getting excellent poses out of the figure. There are plenty of joints and they all move quite well. Hasbro has been on a roll for quite a few year now, making some of the sturdiest and most well designed 6 inch scaled action figures on the market and thus far the Classified Series has been another hit. Construction wise, this still might be the best line Hasbro is putting out right now. 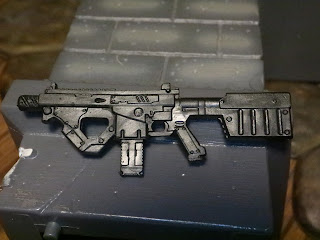 * Snake Eyes comes with a nice assortment of firearms in this set. One of the new weapons is a rather compact assault rifle. It has a large stock, an angled foregrip, and a short barrel. It's a great looking weapon that seems like something that would be very tactical and useful. I don't recognize if it's based on a real firearm but it certainly looks more realistic than some of the early firearms in the line. 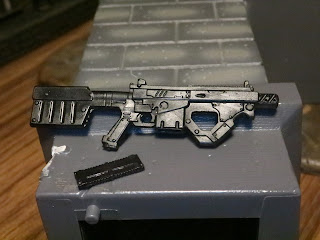 * The rifle also has a removable magazine. It slides out and stays in securely. There's also a hole in the barrel which can hold the suppressor that came with the movie Baroness or some of the Marvel Legends firing effects. 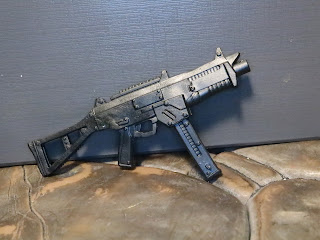 * Next up is a submachine gun that looks like a modified H&K UMP. It has an excellent stock, iron sights, and a thicker front end. 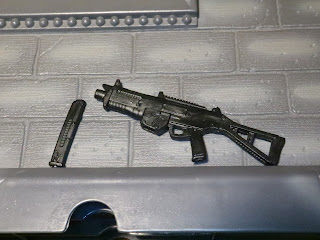 * It also has a removable magazine as well as a hole in the barrel for placing muzzle flashes and such. 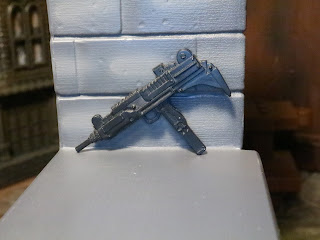 * Snake Eyes' third firearm is an Uzi, the classic submachine gun that the vintage Snake Eyes came with. This weapon was included with the first release Classified Series Snake Eyes deluxe/ 00 but it's nice to have it again here as an option. It's an older weapon for sure but you can choose to give Snakes something modern or something classic with this set. 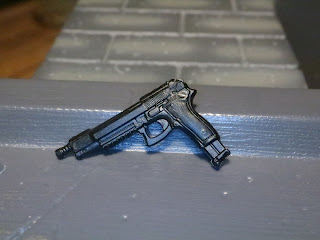 * Snake Eyes' pistol is also reused from the deluxe release. It's a realistic looking pistol with an extended magazine and a longer barrel which allows for the use of the included suppressor. 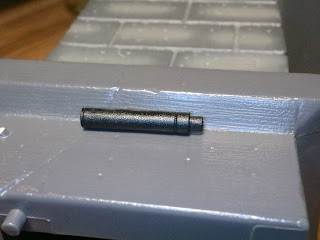 * The suppressor is reused from the previous figures, too, and can fit on either the pistol or the Uzi. 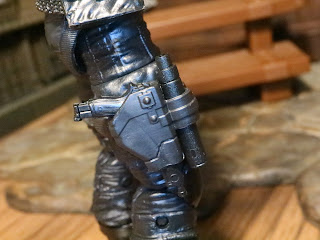 * Need to store the pistol and suppressor so Snake Eyes has his hands free for some dirty work? The removable holster gets the job done and looks great doing it. 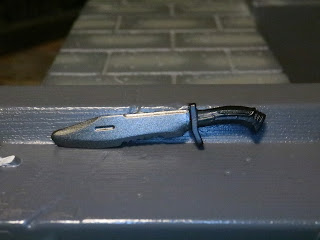 * Want to get close and quiet? Snake Eyes also comes with a very nice knife. The blade is painted a dark graphite color which adds a nice bit of life to it. 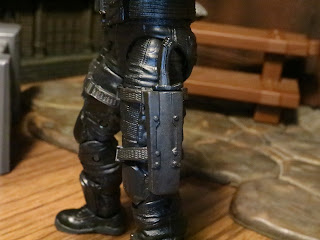 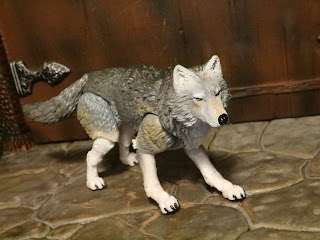 * We've talked about Snake Eyes so let's turn the attention towards his canine pal, Timber! Timber is an amazing looking sculpted wolf figure. I love the Sigma 6 Timber from 14 or 15 years ago but this guy tops it in every way. He's very realistic with an excellent paintjob. 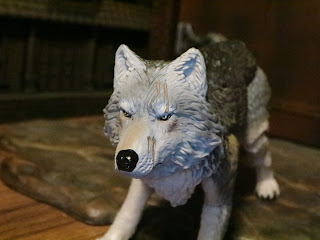 * I absolutely love Timber's headsculpt. The ears are fantastic he looks somewhat at ease or mildly interested. It's a fantastic sculpt that just captures the wisdom and beauty of a wolf. There are some scars on Timber's snout and above his left eye. 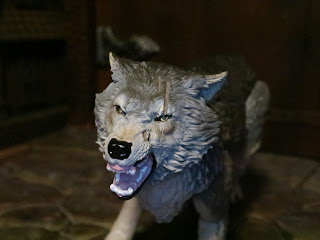 * Timber comes with two portraits, the second of which shows him in full blown attach mode. Notice how his ears change position and the fur on the sides of his head is bristled up. Of course, he's snarling, too, with an mouth mouth filled with sharp teeth. 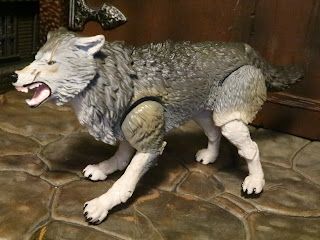 * The paint work and sculpting on his fur is excellent. There are multiple colors here and the blend together nicely to really make for an impressive coat for Timber. 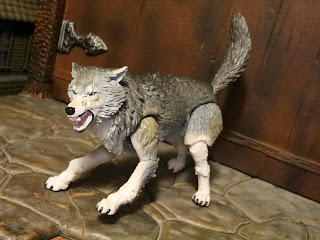 * Timber is highly articulated with at least 20 joints. He can take some fantastic poses and looks good both at rest, at play, or on the attack. He's a super durable figure and really shows off how far action figures have come when you compare him to the solid plastic figures that came with previous G.I. Joe toys. 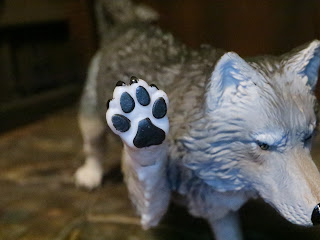 * I love the pads on the bottoms of his feet! They're so adorable. Why yes, I am a dog person. And while Timber might be a lean, mean, Cobra killing machine, I'm sure he's also a good boy who loves a tasty meal, scritches, and chilling out on the couch. 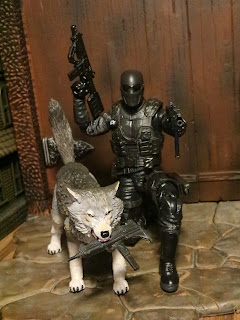 The Snake Eyes & Timber: Alpha Commandos is surely one of my five favorite G.I. Joe releases from 2021. Snake Eyes might be largely a retool but his excellent headsculpt and fantastic accessories make him well worth having. He's definitely my favorite Snake Eyes in the line so far. Timber, while smaller than your average figure, is pretty impressive and feels worthy of a regular spot in the line. I love wolves and this is probably the coolest wolf action figure or toy I can think of. The only wolf I like more is a stuffed wolf that I received for Christmas as a kid. (He's been a friend for years and now he chills out at night at the foot of my daughter's bed as her guard wolf. He's also a puppet and kind of has a grumpy, bad attitude, sometimes.) Hasbro is on a roll with the Classified Series and this was a great way to cap off 2021. It's an Epic set with so much potential. Now I want more articulated dogs, Hasbro! More!