Wrapping Up 2021: Bryophytus from Mythic Legions by Four Horsemen Studios 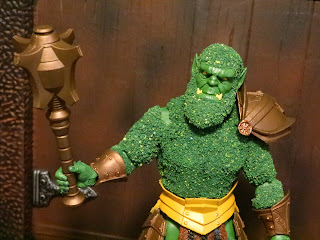 Today is the last of my reviews wrapping up stuff released in 2021 so tomorrow get ready for  stuff that's brand new for 2022! Today's wrap up review is from the Four Horsemen's Mythic Legions line and it's another of their Masters of the Universe tribute characters. This time we're looking at Bryophytus, a lichen orc who pays tribute to my favorite vintage MOTU figure, Moss Man. I've always loved Moss Man and ever since the 2010 release of the Masters of the Universe Classics Moss Man, that version has been my favorite. While Bryophytus isn't technically Moss Man, he might just be the best Moss Man there is to date. With a name deriving from Greek and Latin, Bryophtyus plays off of the plant family bryophytes, of which moss is a part of. Bryophytus basically means "Moss Plant" or "Moss Tree." Bryophytus was part of the All-Stars 4 series and shipped in early December 2021. Let's check out Bryophytus after the break and see why he's all the rage among Moss Man aficionados these days.... 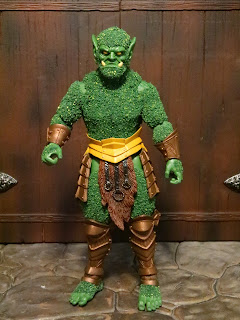 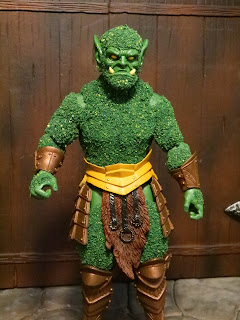 The Positives:
* I'm not an expert on Mythic Legions so I'm not able to point out all of the reuse here or name where all of the various pieces have come from so I'll simply state that this is an incredibly well designed figure that really takes the classic look for Moss Man and adds more of the Four Horsemen's signature flare for oversized medieval boots and random bits of armor. Bryophytus is cast in green plastic and covered with an amazing, spongy moss-like flocking (more on that in a minute!). The colors are perfect and absolutely nail the color palette of Moss Man, making this guy instantly recognizable. 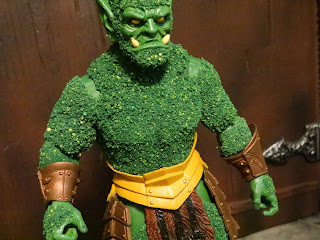 * The flocking covers almost every part of the body of the figure wit the exception of the joints. The flocking is great as it's sponge-like, really putting you in the mind of moss or another bryophyte. The color is excellent as there's a little variation mixed in there with even some yellow. It looks incredible and is something you just wouldn't see done by a mainstream toy company. 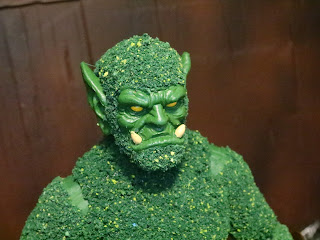 * Bryophytus comes with two portraits, the fist of which is a flocked version of a standard Mythic Legions orc head. It has long ears, oversized fans, and yellow eyes. It's also flocked all over the head and beard, definitely changing the appearance of the portrait. This one definitely makes me think of the vintage Moss Man figure who was just a repaint of Beast Man with some flocking added on. It looks pretty incredible, though with detail and very neatly applied flocking. 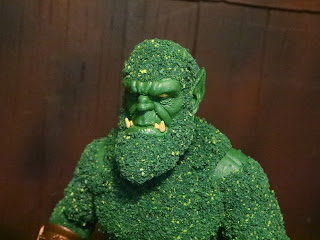 * My favorite portrait is this version with a longer chin that looks like a long beard made of moss or lichen. The fangs are smaller and it looks a bit more peaceful to me, more like the nature spirit that Moss Man is portrayed as in the MYP/200x MOTU cartoon and his depiction in the MOTUC bios and MOTU: Revelation. This portrait is reused from Vorthogg and it's amazing how different it looks here. This is without a doubt one of my favorite action figure portraits of 2021. 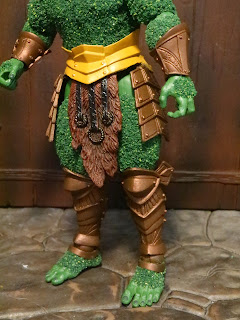 * Bryophytus' greaves and belt pieces are surely reused, too, but they look great. I love his bare feet (with flocking) as they work so much better than boots for a being so connected to nature and their planet, and the belt is a very cool mixture of armor and natural materials, probably leather or fur in the front most likely. 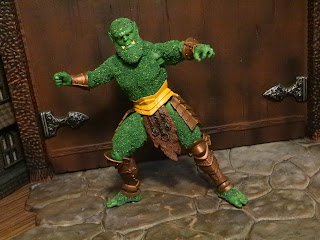 * Mythic Legions has some pretty solid articulation. It reminds me a lot of Masters of the Universe Classics except the joints have a better range of motion and there are a few extra joints such as better ankles, hinged wrists, and the balljointed waist. These guys feel really durable, kind of like MOTUC or Marvel Legends. He's sturdy and the plastic quality is excellent. The moss covering may flake off a bit at the joints when you first pose the figure, but I'll get to that in a moment. 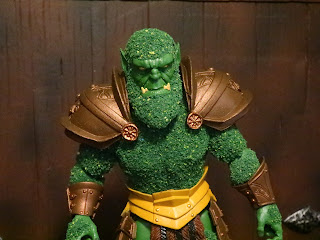 * I've seen these pauldrons before (I know Cowarros had them) but here they're cast in a brownish- bronze to match Bryophytus' other armored bits. I personally think he looks better with just one pauldron. These pop on and off easily, so experiment and see what you like best. 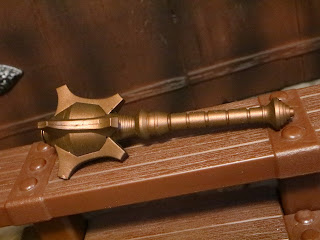 * The vintage Moss Man came with a mace and that's pretty much become the default weapon for the character. For Bryophytus, the Four Horsemen equipped him with what I've heard referred to as a dwarven mace. It's pretty menacing look but still somewhat ornate with a nice aesthetic to it. It looks suitably ancient and regal, perfect for bashing in the skulls of those who would do harm to the Swale, Bryophytus' home. 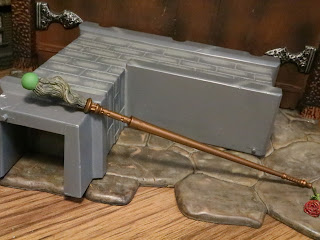 * He also includes a 2-piece staff. The staff itself is a fairly standard metal looking staff with some intricate details on the shaft while the headpiece looks to be carved from wood with a green orb on top. It's a unique piece and definitely adds to Bryophytus' role as a heroic protector of nature. 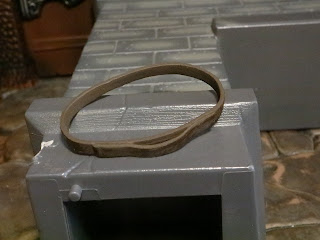 * I think almost every Mythic Legions figure I've picked up has come with this belt or strap. It looks like a leather piece and has a slit to hold a knife or thin sword. I popped Bryophytus apart at the waist in order to use it as a belt for his dagger. 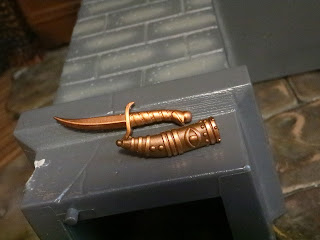 * Speaking of dagger, here it is! Bryophytus carries a rather elegant looking dagger with an intricately detailed sheath. The MOTUC Moss Man gave the character a small dagger made of stone, so perhaps this the Four Horsemen's tribute to that accessory? 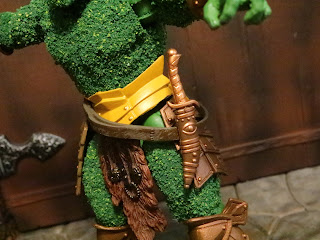 * The dagger fits neatly on the belt. You can clip it to the belt, slip it through the loop; whatever works for you. 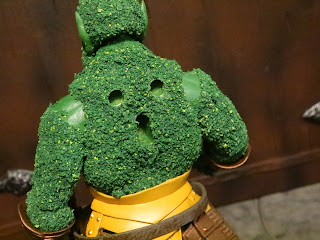 The Negatives:
* I still wish the Four Horsemen included a little piece to plug into the back of the figures when not using the various holes and slots back here. 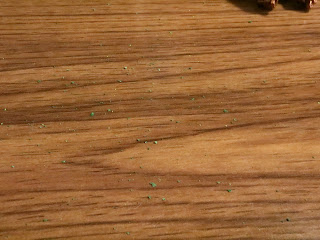 * Flocking almost always tends to shed a little bit and that's no exception with Bryophytus. After posing him and taking pictures I had a little scattering of green stuff on my desk and green stains on my fingers. Just be careful and open him somewhere you can easily clean. 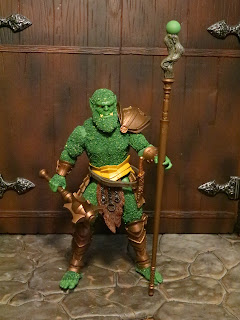 I'm very, very impressed with Bryophytus. Prior to this I've found the Four Horsemen's Masters of the Universe tribute figures to be very cool and fun to collect but Bryophytus might actually be my favorite Moss Man figure to date. I love the headsculpt and the bright colors on this guy. I'm especially loving the unusual look and texture of the flocking. It's so unique! Yes, you do have to be a bit careful with it, but a little caution should be just fine. This is an impressive piece with lots of accessories and fantastic display options. This is how I'm displaying him but unlike most of the previous MOTU inspired releases, I think either headsculpt here could work quite well with the character. The only thing missing is a refreshing pine scent! Bryophytus is Epic and well worth picking up for both Mythic Legions and MOTU fans.
This is the first figure of Bryophytus I've reviewed. For more Mythic Legions reviews check out the following:
Cowarros
Dorina Onoris
Kronnaw
Lord Draguul
Malynna
Orc Legion Builder 3
Purrrplor
Posted by Barbecue17 at 1/31/2022