Wrapping Up 2021: Scareglow (Classic Variant) from Masters of the Universe by Mondo 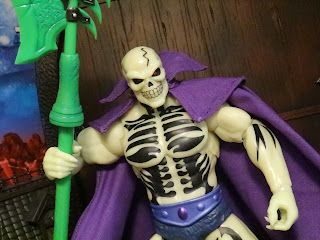 2021 was a very good year for Scare Glow and for fans of the evil, glowing ghost. Not only did Scare Glow have a pretty sizeable role in Masters of the Universe: Revelation but there was also quit a bit of Scare Glow merchandise released. Today I'm looking at the last Scare Glow piece released in 2021: Mondo's Scareglow (Classic Variant) from their 1/6th scaled Masters of the Universe line. Scare Glow (for some reason Mondo calls him Scareglow, but the official name seems to be Scare Glow) went up for sale on October 19th, 2021 and I received him in the mail in early December. Not a bad turn around time if you ask me. Mondo actually released a previous version of Scare Glow in early 2020 but that one had some design choices that made it seem a bit off. This one is more of a true update of the vintage toy and since Scare Glow is such a popular figure Mondo decided to double dip on ol' Karak Nul. He was a fairly limited release and sold out quickly, so it was obviously a good decision on their part. How did this second version of Scare Glow turn out? Let's find out after the break... 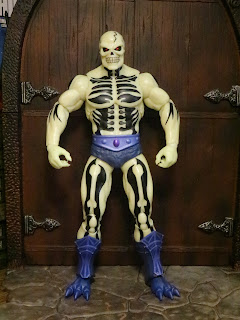 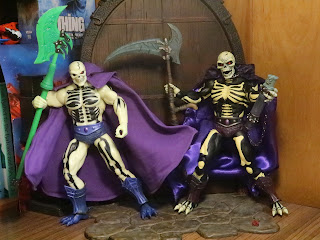 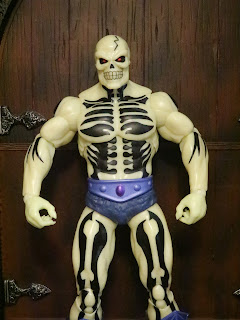 The Positives:
* While the previous Scare Glow did try to better imitate the look of a skeleton (or perhaps someone wearing a skeleton costume) this version captures the vintage look that's bizarre but incredibly charming and cool. It's more ghost-like with lots of white and black paint over glow-in-the-dark plastic to represent the negative spaces where Scare Glow doesn't have glowing bones. His furry trunks are quite a bit lighter, too, more fitting with the vintage aesthetic. 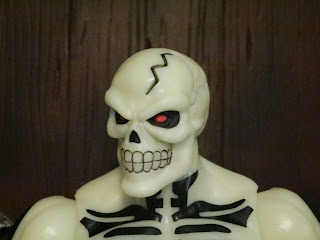 * The portrait is one of the biggest changes for this release and it's pretty much a straight up translation of the vintage figure. The line work is nice here on things like the teeth and the cracks on the skull and he's instantly recognizable. While I do not subscript to the "Scare Glow is Skeletor's ghost" theory, this figure really does look like Skeletor. 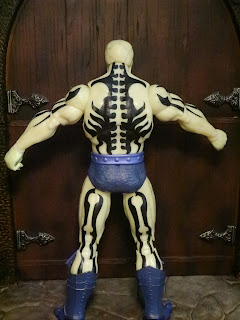 * Here's a shot at the impressive amount of detail on the paint work on Scare Glow's back. That's crazy cool looking. I wonder if anyone has gotten tattoos like this. That would be pretty crazy awesome. 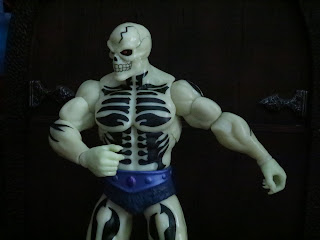 * Skeletor does have a nice, strong glow to him since he is molded in glow-in-the-dark plastic. He looks pretty cool on display and it's fun to see him emit some glow after you turn off the lights. 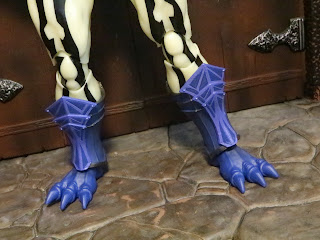 * Scare Glow has the same greaves and clawed feet as Skeletor. His greaves are  brighter shade of purple than the previous Scare Glow release and they looks less weathered and worn. 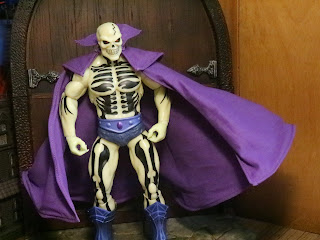 * Scare Glow's classic cape looks excellent here and really completes the figure. I really do like this cape better than the cape from the previous release. It's made from a thicker, rougher material with the oversized collar and the prominent mantle that goes over his shoulders. The cape is held on by a rope like cord that fits over his neck (just pop off his head). There's a wire for posing inside the bottom of the cape and on the mantle, so the cape looks great on display and is pretty photogenic. 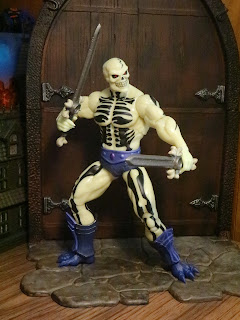 * Mondo's MOTU figures do not feel like your traditional 1/6th scale figure but more like oversized Masters of the Universe Classics figures. Like the other figures in the line, Scare Glow is really heavy, but also very durable. He feels plenty sturdy and since his body is pretty basic and unadorned you get a full range of motion out of most every joint. 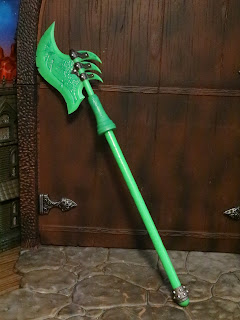 * Scare Glow's updated halberd is another key part of this release. It's a completely new piece that is very long and quite awesome looking. It's bright green, like the vintage toy, but it also has some additional detail and paint hits in places like on the blades behind the main blade and at the base. It's large and somewhat unwieldy but it really completes the look of the figure. That pop of green looks quite nice and stands out from Scare Glow's purple details. 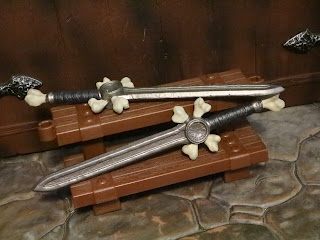 * Mondo also in the dual bone hilted blades again. These are actually the same as the sword that Skeletor came with (it's based on Skeletor's sword from the Filmation series) with hardly any paint differences, either. It's odd that these are being treated as generic swords, as Skeletor's sword always seemed unique to him, but extra accessories are never a bad thing. They've now come with both Scare Glows, Skeletor, and Keldor. 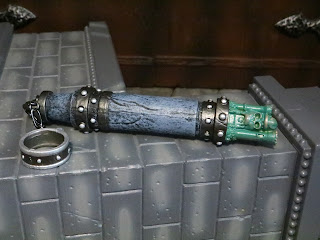 * Scare Glow also is again packed with the cursed reliquary he carries containing a key to a secret entrance to Castle Grayskull. Too bad he isn't allowed to open the reliquary and take the key! The reliquary was introduced in Masters of the Universe Classics line and here it looks even better: The miniature Grayskull on the top is awesome, as is the actual metal chain which keeps this attached to Scare Glow's wrist. Just remove his hand and pop the cuff over his forearm. The colors are pretty much the same as the previous release as Grayskull is just a bit brighter this time around. 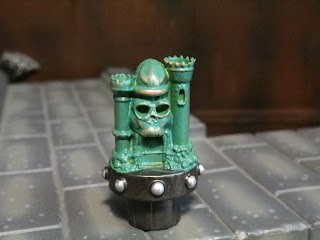 * Here's a close-up shot of the little Grayskull piece from the top of the reliquary. It's pretty neat for such a small piece. 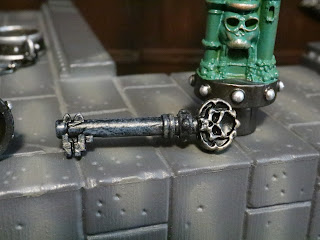 * Inside the reliquary is a key to the secret side entrance of Castle Grayskull. I love the design of the key and the skull emblem on it. It's such a fun accessory. I love seeing new MOTU product take inspiration from other more recent lines like MOTUC, which added so much to the mythos. 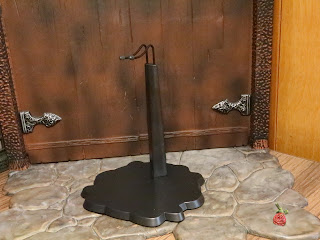 * Scare Glow comes packaged with the same stand as every other figure: A black plastic display stand with a metal arm that rests under his crotch to keep him standing. It's not the most interesting design for a stand but it works quite well for a heavy figure like this. The bottom of the stand has a stylized "M" for Mondo bit that's all the personality you'll find on this piece. 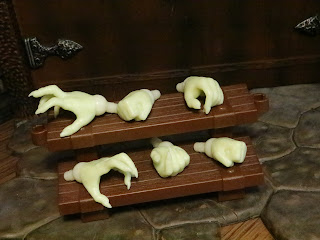 * Scare Glow comes with the same six interchangeable hands as the previous version. This time they're simply cast in GITD plastic with no paint apps. The hands swap out rather easily (they have really thick wrist pegs so no worries about breakage) and stay in place tightly. You can swap out between three pairs: Gesturing hands, traditional fists, and standard grips. The hands are actually fairly rubbery, too, making putting weapons in them so much easier. 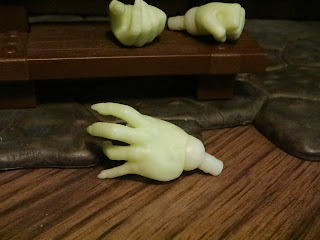 The Negatives:
* The hands look pretty plain with no paintwork, don't they? At this scale and price point I would hope that the nails would at least be painted black or something. They feel unfinished and a bit lazy. 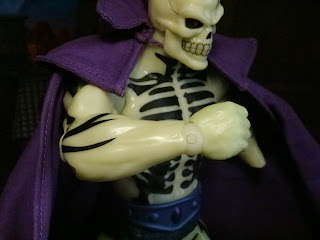 * Seriously, this guy needs some bracers, doesn't he? Scare Glow's arms look really weird without them on a figure of this scale. Too much "exposed bone" on a figure this large really kills the effect of this being an actual skeleton. I said the same thing about the previous release and I still feel like it's a weakness of this figure. There's not enough uniqueness here. 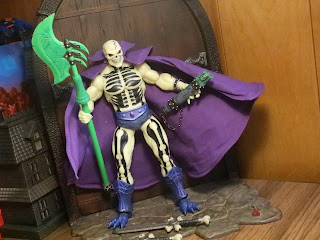 So... how does Scare Glow rank? Overall, I think I like him better than the previous release although I do wish Mondo had still done a bit more with the figure. Some unique gauntlets, painted hands, a unique portrait or two, maybe even a better belt/ waist piece. Considering the price on this figure is $35 dollars higher than the previous figure with really nothing more than that release it seems a bit lacking. Even a cool extra or a repainted version of the previous head would have been nice. He's a really cool figure and a very limited one (1,000 pieces, I believe) but for the price I wanted a bit more. He gets a Good from me but I'm really hoping for more uniqueness from future releases. At the price Mondo is at on the Masters of the Universe 1/6th scale line I can see myself skipping some future releases. They're at Hot Toys prices now and I'm just not sure the value is there at this point. Earlier figures like Man-At-Arms, Skeletor, and He-Man came with alternate portraits, smaller characters like Relay and Orko hiding in a pot, and multiple extras. Lately we're seeing more bare bones releases which I hope isn't the norm going forward. No offense intended, Scare Glow.
If you're a Scare Glow fan, check out my review of the MOTUC Scare Glow, the Masterverse Scare Glow and Scare Glow (exclusive), the MOTU origins Scare Glow, the Mega Construx Heroes Scare Glow and standard Scare Glow, the Funko POP! Scare Glow pencil, the Mondo Scare Glow, the Vinyl SODA Scare Glow, and the ReAction Scare Glow and Scare Glow (Clear).
For more Masters of the Universe figures from Mondo check out the following:
Faker (Mondo Exclusive)
He-Man
Hordak (Mondo Exclusive)
Keldor
Man-At-Arms (Mondo Exclusive)
Mer-Man (Mondo Exclusive)
Scareglow
Skeletor