Wrapping Up 2021: Evil-Lyn from He-Man and the Masters of the Universe by Mattel 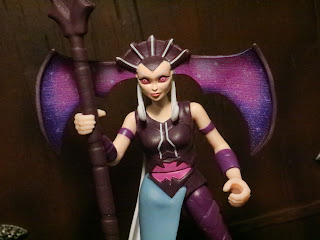 I ended up skipping reviewing the standard Man-At-Arms and Powers of Grayskull He-Man since they were pretty similar to other releases (I'm sure I'll come back to them at some point) but I didn't want to skip Evil-Lyn. I haven't found Sorceress or Orko yet but I did get Evil-Lyn for Christmas and I was quite excited for her. I really enjoy the Netflix He-Man and the Masters of the Universe show as it's putting something out that's quite different yet still feels like MOTU to me and I'm thrilled the second season was just announced. The toyline has been rather average so far. Obviously these figures are truly made for kids in mind and I do applaud Mattel for putting out a variety of characters, having plenty of stuff in the pipeline, and keeping these at a fairly reasonable price point. From what I've seen most of the stuff other than the Chaos Snake Attack and the 8.5 inch Battle Armor He-Man seemed to disappear from the shelves during Christmas, so the line clearly has fans. In this take on MOTU both the heroes and villains can be transformed, so Skeletor at one point has his Dark Masters. usually Evil-Lyn is just Evelyn, a Word Witch working with Keldor and Kronis, but when transformed by the Havoc Power of Skeletor's Havoc Staff she becomes Evil-Lyn. Let's see how she turned out after the break... 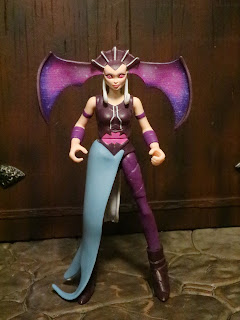 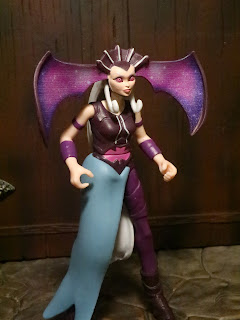 The Positives:
* Evil-Lyn has a pretty cool appearance on the show and I think Mattel has done a fairly admirable job of translating her sleek design into this line. The characters in He-Man and the Masters of the Universe are very stylized, like something you'd see in a DreamWorks or Pixar film, so getting their designs perfect in 3d seems like it'd be a little tough. Evil-Lyn looks pretty good overall with lots of color and a separate sash hanging over her right hip and down her right leg. 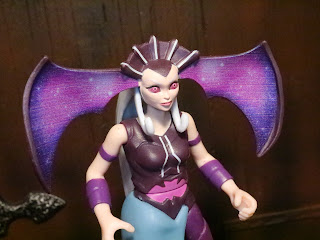 * One of the really unique things about this version of Evil-Lyn is that her headpiece extends out, like bat wings, and there's kind of a techno-galactic look to their surface, almost as if they're two portals attached to her. The paint application here looks really nice and definitely conveys the effect far better than I anticipated it would. 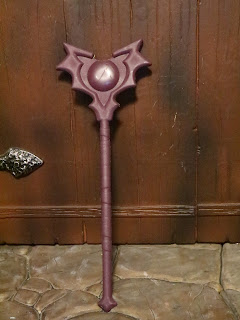 * Evil Lyn's staff is cool. It's a simple, unpainted plastic piece but it fits in her hands well and matches her aesthetic. 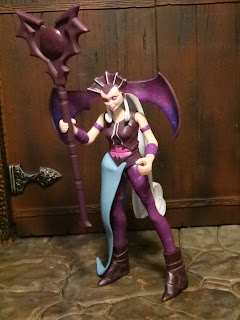 * These are sturdy toys and Evil-Lyn is no exception. She has the Power Attack feature, too, meaning you can twist her waist and she'll spin back into place to deliver a blow with her staff.
The Negatives:
*Unfortunately, her articulation is really hampered. Her wrists/ forearms so swivel but the swivel on one of mine is stuck and it feels like the joint is being twisted rather than functioning. Further, the sash on her right hip is solid plastic, so her right leg is effectively useless even though it's jointed. There's just not much range of motion here despite her having a fair number of joints. 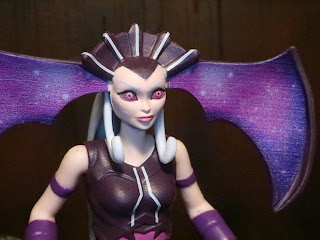 * I'm not loving Evil-Lyn's face. The eyes are cool (and kind of creepy) but the face is definitely shaped wrong and just doesn't look right. Here's what she's supposed to look like. 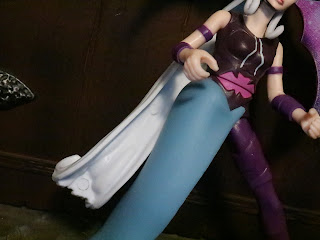 * This line definitely takes some shortcuts and making Evil-Lyn's hair a hollow piece is definitely a cheap out for sure. 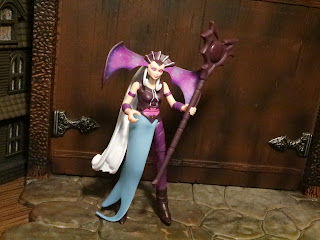 I was really excited for this figure but it really just isn't wowing me at all. It's pretty weak, honestly. It looks OK at a distance but the face is really off and there's just really not much to do to pose her. I'm giving her an Eh and a 1/2. I like the Netflix He-Man and the Masters of the Universe show and I love these character designs but I just don't feel like Mattel is doing them justice in this line. It's truly exciting to see new takes on the MOTU mainstays but the design and execution of some of the figures needs to be better.