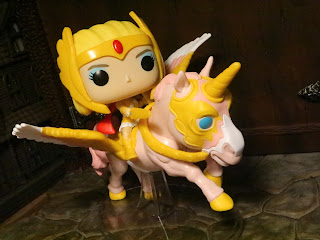 Funko was an absolute Masters of the Universe merchandising beast in 2021 and while the still seem intent on neglecting Teela they did make sure to give She-Ra some love. Most exciting was the fact that they also gave Swift Wind some love as well. When Funko shifted the Masters of the Universe license to the POP! Retro Toys branding a year or two ago they mainly started focusing on the toy versions of characters so that's what we've got here: A mixture between the vintage Princess of Power and Filmation She-Ra riding a vintage toy inspired Swift Wind. While Swift Wind was male in the Filmation cartoon series and in everything since then, some of the early material referred to Swift Wind as she. My daughter, Adora (seriously) and I were reading one of the vintage She-Ra storybooks a few nights ago and encountered this. Interesting. Anyways, She-Ra and Swift Wind are part of the POP! Rides subset and were sold exclusively through Walmart. I ordered mine off Walmart.com back in October or so but I've seen the set quite often so the distribution seemed to be pretty decent on this set. Let's take a look at She-Ra and Swift Wind, a powerful pair of POPs..... 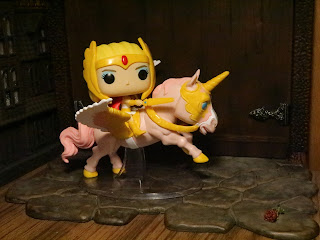 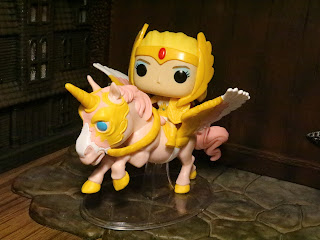 The Positives:
* This is a pretty large and heavy set thanks to Swift Wind and his wingspan. She-Ra is permanently attached to Swift Wind and they're both mounted to a large, clear plastic stand that keeps them posed with Swifty's front legs up in the air. She-Ra is built like a standard POP! so her head can swivel as she looks through the skies. 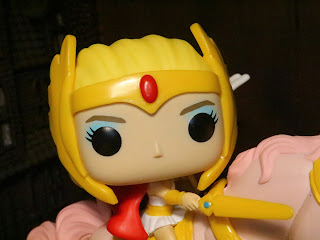 * I'm pretty sure this portrait is reused from the standard She-Ra #38 POP! figure released. It's a great look, though, and it's far more reflective of the Filmation She-Ra than the vintage toy. The paint work on her eyes is really neat and clean and her tiara is suitably impressive. 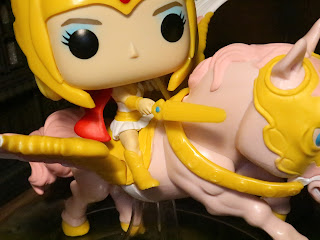 * It's really tough to tell here but She-Ra's outfit is also a blend of styles. The cape is very Filmation but the asymmetrically designed dress seems inspired by the vintage figure. 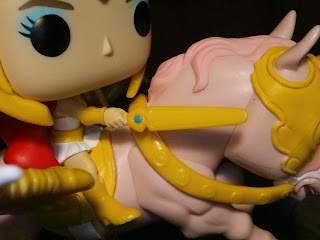 * What is based on the vintage toy is She-Ra's sword. It's very different from nearly every other version and is gold/ yellow with a small blue gem painted on. I like how She-Ra is holding it out while flying on Swifty. That's pretty fierce. 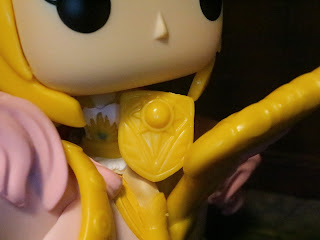 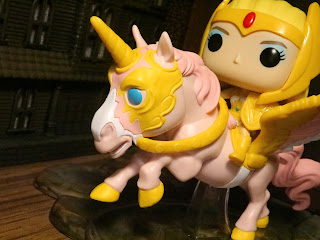 * Swift Wind looks like the toy version of Swift Wind for the most part. I'm a bigger fan of the Filmation Swift Wind with Lou Scheimer doing an awesomely deep voice that just jumps out at you but it's cool to see the vintage toyline get some love. Other than She-Ra herself from time to time Mattel and licensees seems rather reluctant to make product truly based on the vintage toyline. 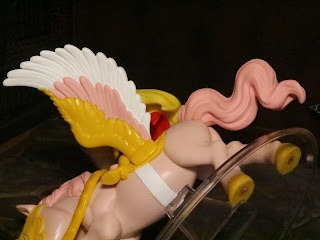 * Funko did a nice job on Swift Wind's wings and tail. They're suitably impressive for a horse of his pedigree! 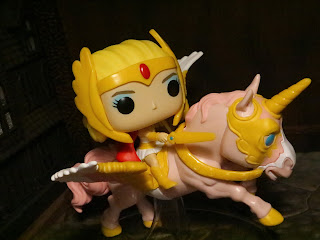 The Negatives:
* Like with the standard POP! She-Ra, I'm still not sure why Funko made She-Ra and Swift Wind's accessories in yellow instead of gold. I've seen gold colored paint and plastic on Funko stuff so it's not like they can't do it. The vintage toys definitely looked more gold than yellow so it remains a weird design choice. 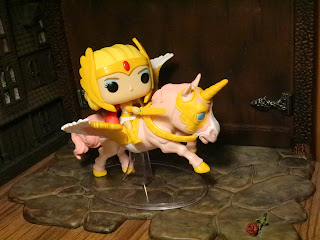 This POP! Rides She-Ra on Swift Wind turned out quite nice. We don't see nearly as much She-Ra stuff, particularly merchandise based on the vintage toyline, so it's always welcome. Mounting Swifty on a clear stand to give him a more dynamic pose was a great idea as well. This set was a bit pricier than some of the other POP! vinyls but it is a good bit larger and fairly heavy, so there's that. It's a Great set and PoP (Princess of Power) fans who are also fans of POP! vinyls ought to love out. It's a PoP POP! that really pops.
I've reviewed so many different toys and collectibles of She-Ra/ Adora that I've given her a review archive of her own. Check out the Crystal Castle for all of the She-Ra reviews you need to start your own Great Rebellion!
If you're looking for more toys of Swift Wind/ Spirit, check out my reviews of Battle Armor She-Ra and Swift Wind from Mattel's She-Ra and the Princesses of Power and the Sonic Swift Wind Straw Buddy.
For more POP! Rides reviews check out the following:
He-Man on Battle Cat #84
Skeletor on Night Stalker #278
Skeletor on Panthor #98
Skeletor on Panthor #98 (Flocked)
Posted by Barbecue17 at 1/13/2022