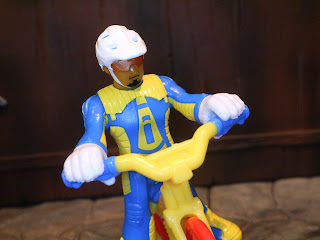 Today I'm finishing up my reviews of all of the figures for Series 12 of the Imaginext Collectible figures series and I'm wrapping things up with the Cyclist Bike Racer. I'm just going to call him the Cyclist for short, as he is clearly supposed to be a hardcore professional bicyclist. I'm not usually a huge fan of the sports based figures but I kind of like this guy. His textured suit and cool helmet definitely add a bit more pizazz to him than your average sports figure has, plus he also has a fairly intricate bicycle with spinning wheels. Imaginext usually throws a sports figure in the mix, so they must have some level of demand. Let's check out the Cyclist Bike Racer after the break... 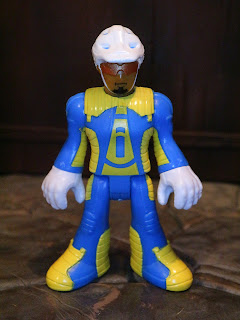 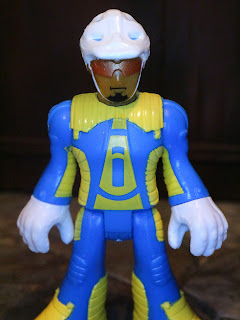 * There's a lot that I like about this figure. First, I like the color scheme. Blue and yellow look nice together as it reminds me of various DC characters like Guardian and Dr. Fate. Second, the texturing is cool. There's a "ribbed" look on the shoulders, ribs, and inner arms and legs. Lastly, not only is the Imaginext "i" prominent but it is depicted on some yellow dashes that look like the diving lines on a road. It's a nice look for a cyclist. 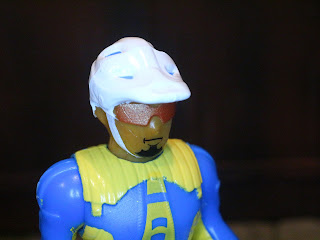 * The headsculpt is pretty cool too, especially because of the nicely rendered bicycle helmet. There are even small holes in the helmet to improve air circulation. The Cyclist himself has a determined look, some slick red wraparound sunglasses, and a stylish goatee. Win it, bro! 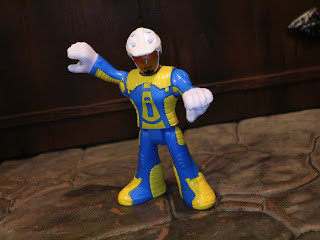 * Like most other Imaginext figures, this guy features just enough articulation be fun but not enough to make him hard to stand up. These are always fun, durable toys and I'm glad Fisher-Price has kept the style consistent for so long now. 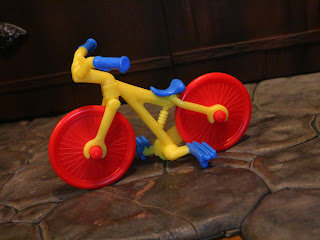 * What good is a Cyclist without a bicycle? This guy comes with a yellow bicycle with blue features and red wheels. It's actually a 4 piece bicycle as the front half and the wheels are removable from the main body. I like the bright primary colors of it. They might look a little toyish, but I'm definitely OK with that here. It's a fun look that matches the style of the figure. 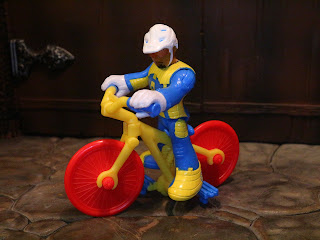 * The Cyclist looks really good on his bicycle, too. He sits over the body easily and his hands grip the handlebars securely. The bicycle pedals have tabs on the bottom which help keep the bicycle standing upright, so you can simply display the cyclist on his bike. It's very well thought out and designed. 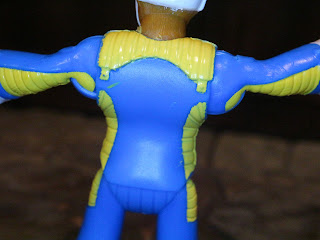 
* The blue and yellow color scheme looks great but some of the paint is a bit iffy. Not great but not terrible. Still, for such a simple design I would have hoped things were just a bit neater. 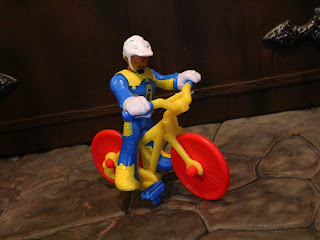 The sports figures are rarely my favorites but I'm actually  rather pleased with the Cyclist Bike Rider. He has a great color scheme, some interesting sculpted detail, and a really cool bicycle accessory. He's another Great figure in this series, so if you collect these he's definitely one that feels worth the $3 or $4 bucks. He's not my favorite from this series (that'd be the Monkey Tiger) but he's definitely not a disappointment. For series 12 I'd go with this order, from best to worst: Monkey Tiger, Black Clawtron Robot, Empire State "Big" Robot Building, Cyclist Bike Racer, the Female Backpacker Camper, and the Surfer.


This is the first Cyclist Bike Rider I've reviewed. For more Imaginext Collectible Figures check out the following: