Action Figure Review: Grizzlor from Masters of the Universe ReAction by Super7 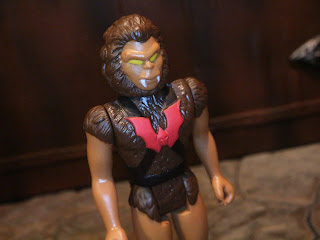 SDCC 2019 has come and gone and interesting things are afoot for Masters of the Universe. While Super7 hasn't said much it does appear that the ReAction line could very well continue with more MOTU figures in the future. Today I'm checking out one of the figures from the newest series of Masters of the Universe ReAction figures and it's a guy who has always been one of my favorites: Grizzlor! One of the original members of the Evil Horde, Grizzlor appeared fairly often in the Filmation She-Ra series and was a regular in the later MOTU minicomics. As a kid I loved this furry guy simply because of his action figure that kind of made him look like a Crite from the movie Critters. This guy isn't furry but he still looks fairly savage. Let's check out Grizzlor after the break... 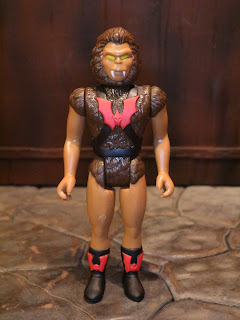 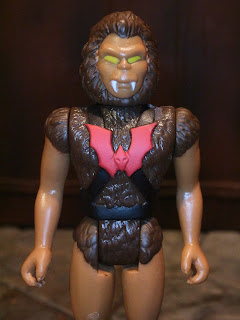 
* Interestingly, Grizzlor seems to be based off of his Filmation design rather than on the vintage toy. That's a little unusual as most of these figures seem to be based quite heavily on the vintage toyline. That's not awful though I do wish he looked a bit more savage. Still, if you're trying to imagine what Grizzlor might have looked like rendered in the style of the vintage Kenner Star Wars line, this is a pretty good interpretation. I like the sculpt of his fur and the sharp red and black of his harness. 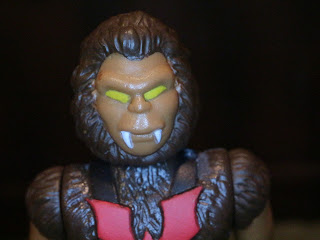 * The headsculpt is pretty cool, especially thanks to the eerie yellow eyes and the sharp, pointy teeth. In the original minicomic Grizzlor appeared in, "Grizzlor: The Legend Comes Alive!," the character is portrayed as sort of an Eternian urban legend that Buzz-Off likes to tell stories about. I'm definitely getting a Bigfoot/ Sasquatch/ Knobby vibe here, so that's quite fitting considering his roots. If you believe that the Horde are based on the Universal Monsters than you may also see some Wolfman influence here, too. 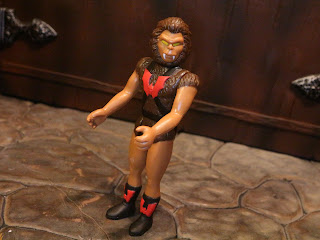 *   If you've ever picked up a retro figure like this, you know what to expect: 5 points of articulation and all swivel joints. Grizzlor feels quite well made and sturdy and definitely of a superior quality than most of the earlier ReAction figures that Funko put out. Super7 has been very consistent in the quality of their ReAction lines over the past couple of years and has really perfected the style. 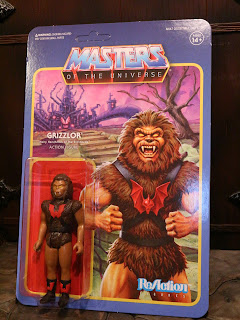 *  The card art on most ReAction figures released by Super7 is beautiful and their Masters of the Universe line is no exception. Grizzlor features an awesome illustration of the character that is a mixture of the vintage toy design and the Filmation design. Even better, Super7 changed up the background to show off the Fright Zone in the background. That's a nice touch! To preserve the card I actually made a slit in the top of the blister so I can slide the figure in and out. It work great and allows the figure to be displayed inside and outside of the card. I've got mine hanging on a metal pegboard similar to what you'd see in a retail store! 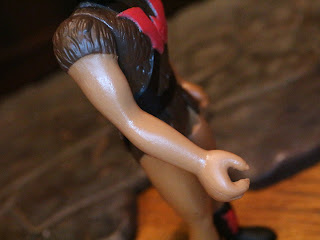 * I know these are supposed to be modeled after the vintage Kenner Star Wars line but, man, does Grizzlor look wimpy or what? Seriously, do you even lift, bro? His arms look too smooth and too scrawny for Grizzlor, no matter what style you're going for. 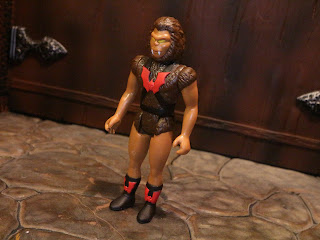 While I'm sure many ReAction fans will want to complete the Horde, Grizzlor isn't the most impressive of the MOTU ReAction figures. He's Good, but his scrawny arms and legs and lack of a weapon of some sort definitely make him seem a bit disappointing. I do like most of the sculpt and paint, but those pencil arms make him seem far less savage and ferocious than I'm typically willing to accept. I'm really curious why he didn't come with a small crossbow, either, or at least one of the Horde energy batons from the Filmation cartoon. It's odd that he's basically the fist figure to not include any accessory, isn't it?

If you're a Grizzlor groupie then check out the alternate 200X Grizzlor head from the Heads of Eternia pack and the Club Grayskull Grizzlor.

For more Masters of the Universe ReAction figures check out the following: