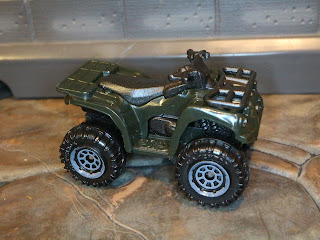 Today I'm back with another review from Mattel's ever expanding line of Jurassic Park Matchbox vehicles and this time I'm checking out the Kawasaki Brute Force 750 from Jurassic World. The Kawasaki Brute Force 750 shows up a few times during Jurassic World both as the vehicle driven by Barry Sembene during the pursuit of the Indominus Rex and later driven by Owen and Claire through the streets of the main plaza of Jurassic World. It's a cool little vehicle and while it's not something that screams "Jurassic Park" to me, I'm definitely intrigued by how deep Mattel is going with this series! My buddy Kooshmeister has even let me know that more of these are coming soon, so we'll see how the line continues to grow in 2019. Who ever though we'd have so many of these, right? Let's check out the Kawasaki Brute Force 750 after the break... 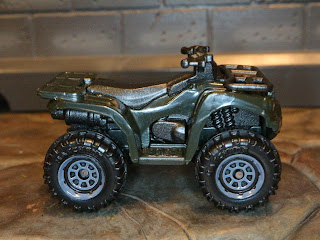 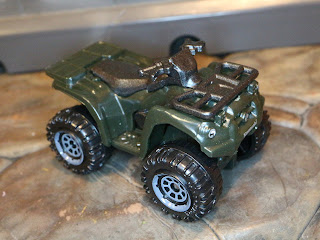 * I like this one much better than the Triumph Scrambler. For one reason, it stands up on its own. It's also just a fun, well sculpted vehicle. I'm sure that with a little effort you could even find some minifigure that would fit on it. The wheels look great as does the mixture of colors. It even has the Jurassic World logo and the Kawasaki name on the front grill. 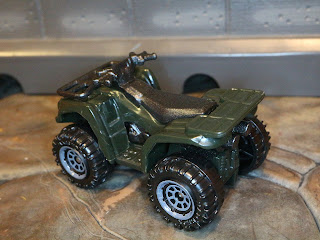 * Here's a look from the rear of the vehicle. While the sculpt is a bit soft, it definitely includes lots of detail. 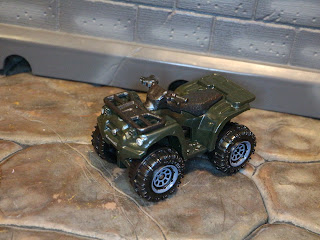 Mattel continues to mine the Jurassic Park franchise (I really dislike calling it the Jurassic World franchise, as that makes no sense to me) for more vehicles and this is another solid addition. It's not as oversized as the Triumph Scarmbler and it's quite a bit more fun, too. This is another Good and a 1/2 vehicle in the line with some cool little details you might not notice right away. While it's not a traditional action figure line, the Jurassic World Matchbox has definitely been a fun part of 2018 for me and I'll be keeping it in mind when I begin my bets of 2018 awards at the end of January.


This is the first Kawasaki Brute Force 750 I've reviewed on the site. For more Matchbox: Jurassic World vehicles, check out the following: