Action Figure Review: The Creeper from The New Batman Adventures by DC Collectibles 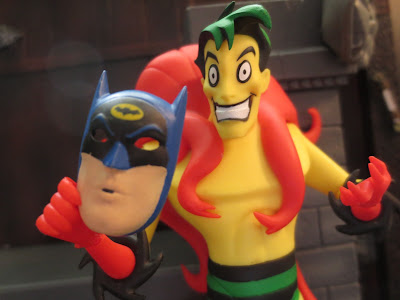 It's the Creeper! The Creeper is only the second figure I've picked up from DC Collectible's The New Batman Adventures line but he's such a unique character that I just had to have him. The only other Creeper figure I own is the DC Universe Classics version and I figured I should grab another one. Old Jack Ryder hasn't had that many figures made in his likeness, you know. Anyways, you all know that I love Batman action figures but there is another reason I purchased the Creeper: I have a friend whom myself and other friends pester a bit by calling him "Da Creeper!" It's a long story. Anyways, he hates it, so I thought it would be funny to have this guy sitting around when he came for a visit. He's rather observant because he noticed the Creeper just standing on top of a book shelf, half hidden behind something else. Whatever your reasons for checking out the Creeper, why don't you read on and learn more? 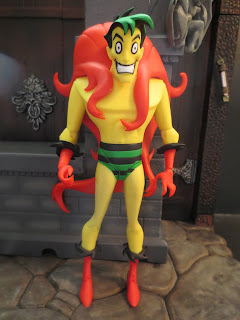 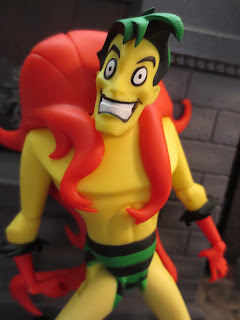 
*  The sculpt on the Creeper is absolutely excellent. Not only has DC Collectibles captured the proportions of Bruce Timm's redesigned artwork for The New Batman Adventures but they've also done an excellent job of making the more simplistic designs interesting. The garish colors really pop on this guy and the head sculpt is just pure win! I love the work on the face and the two tone green and black hair. There is absolutely no way you'll miss this guy when he's standing on the toy shelf. 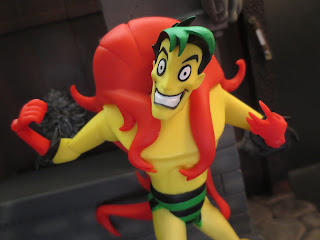 * The Creeper's upper body has some excellent and useful articulation. The wrists, elbows, and shoulders all have an exceptional degree of movement and, coupled with the excellent ball jointed head, really give you the opportunity to have the Creeper make some wacky, expressive poses. 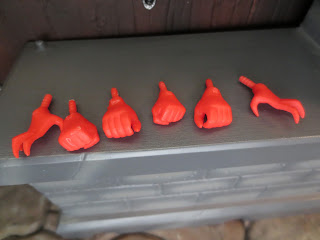 * Like many of the other figures in this series, the Creeper has three sets of swappable hands. There's a set balled up into fists, a set spread wide open, and a set of your garden variety C-grips for holding accessories. The hands swap very easily and stay on securely. What else could you ask for? 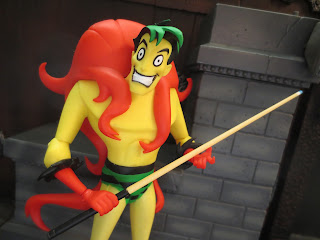 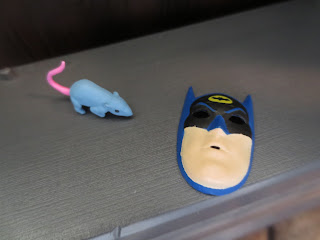 * The mouse and Batman mask are also cool little extras. The mouse actually has a few minor paint apps (the eyes and tail) while the Batman mask really looks like a miniature version of a children's Halloween mask. The Creeper actually used this in the episode "Beware the Creeper" where he found it at a thrift store and tried to pay for his new costume using it (he handed it to the cashier after asking if they took plastic). 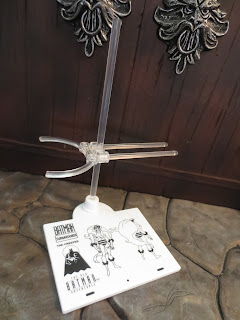 *I love stands. Love them, love them, love them. Most DC Collectibles figures have stopped coming with stands but due to the unusual proportions of the Animated figures DC has been including some very nice stands that clip around the waist. I love the way they look and the cool art that's features on the base. 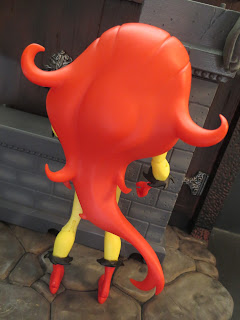 
* The Creeper wears a massive, fuzzy cape that almost seems to have a life of it's own. In regards to the sculpt, DC Collectibles did an admirable job here. It looks pretty good. Functionally, however, it's bulky, heavy, and gets in the way of the character's mobility and using the included stand. Something softer and pliable might have been a better choice here. 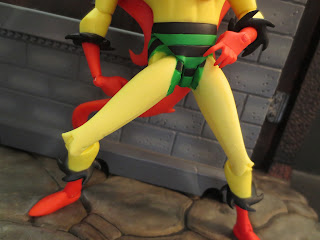 * I'm really not a fan of the H-hinged hips that DC Collectibles is using on these figures. They're really, really awkward looking when you try to put the figures in any pose other than the standard standing up straight. I liked the H-hinged hips on Mattel's DC Universe Classics line but I don't think they work as well on thin, svelte figures like the Batman Animated lines. 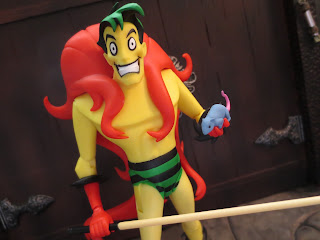 While the initial quality control problems in the early releases definitely caused some collectors to be apprehensive towards this line, DC Collectibles seems to have rectified their problems and continues to put out some extremely impressive figures. The Creeper is not a character who has had many figures crafted in his likeness so it's a real treat to get him this early in the line. The excellent sculpting and paint really capture his wacky, over the top personality and make this guy stand out on the shelf. The accessories are also incredible. It's amazing to me that DC Collectibles can release this uniquely sculpted figure with three sets of hands, three accessories, and a base while other larger toy companies working in a similar scale continue to offer less and less. Long live DC Collectibles and the Creeper!

I've only reviewed one other figure from this line so far: The New Batman Adventures Batman
Posted by Barbecue17 at 8/03/2015