Action Figure Review: The Gentlemen from Buffy the Vampire Slayer ReAction by Funko 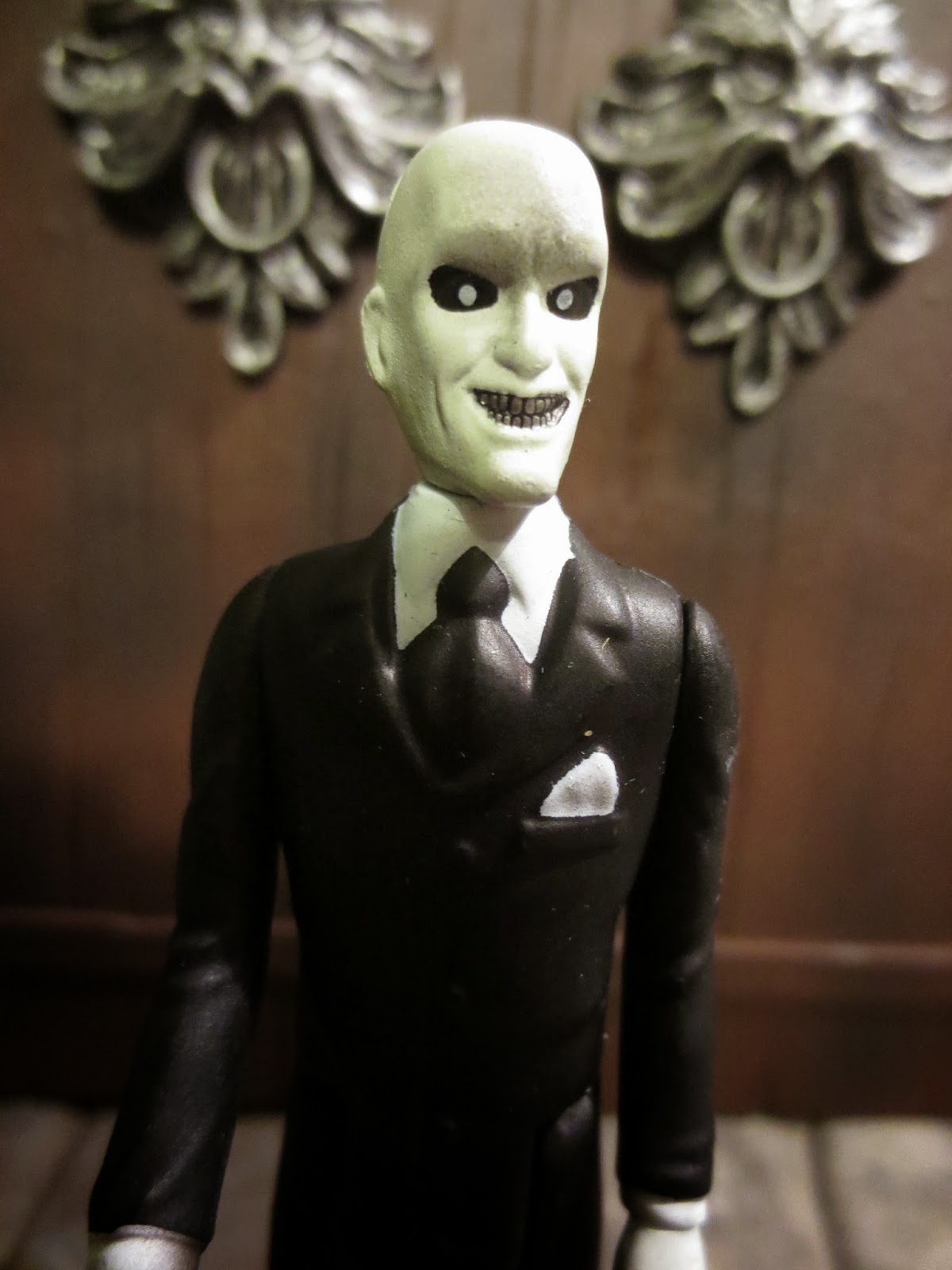 I've never seen a single episode of Buffy the Vampire Slayer but I am familiar with the Gentlemen from the silent episode "Hush." They're definitely creepy (the tallest Gentleman is played by Doug Jones) and have a really cool aesthetic. Honestly, I might have to watch this episode since Buffy the Vampire Slayer is currently on Netflix. The Gentlemen action figure I'm reviewing today is part of Funko's ReAction brand, so it's designed and engineered to look like a Kenner action figure from the late 70's or early 1980's. I picked him up because with all of my retro based action figures I've been assembling a really cool council of monsters. Taking figures from Funko's Universal Monsters, ReAction Horror Series, Alien, and Predator, Bif Bang Pow!'s The Twilight Zone, the upcoming Legends of Cthulhu from Warpo Toys, and various characters from Kenner's vintage Star Wars line, I've been assembling an awesome council of retro-inspired monsters to cause mischief and mayhem all over the world! So why'd I grab the Gentlemen? Well, he's creepy as all get out and he kind of reminds me of both the Slender Man and the Silence from Doctor Who. He just fits in nicely as the creepy suited baddy. Anyways, more thoughts after the break... 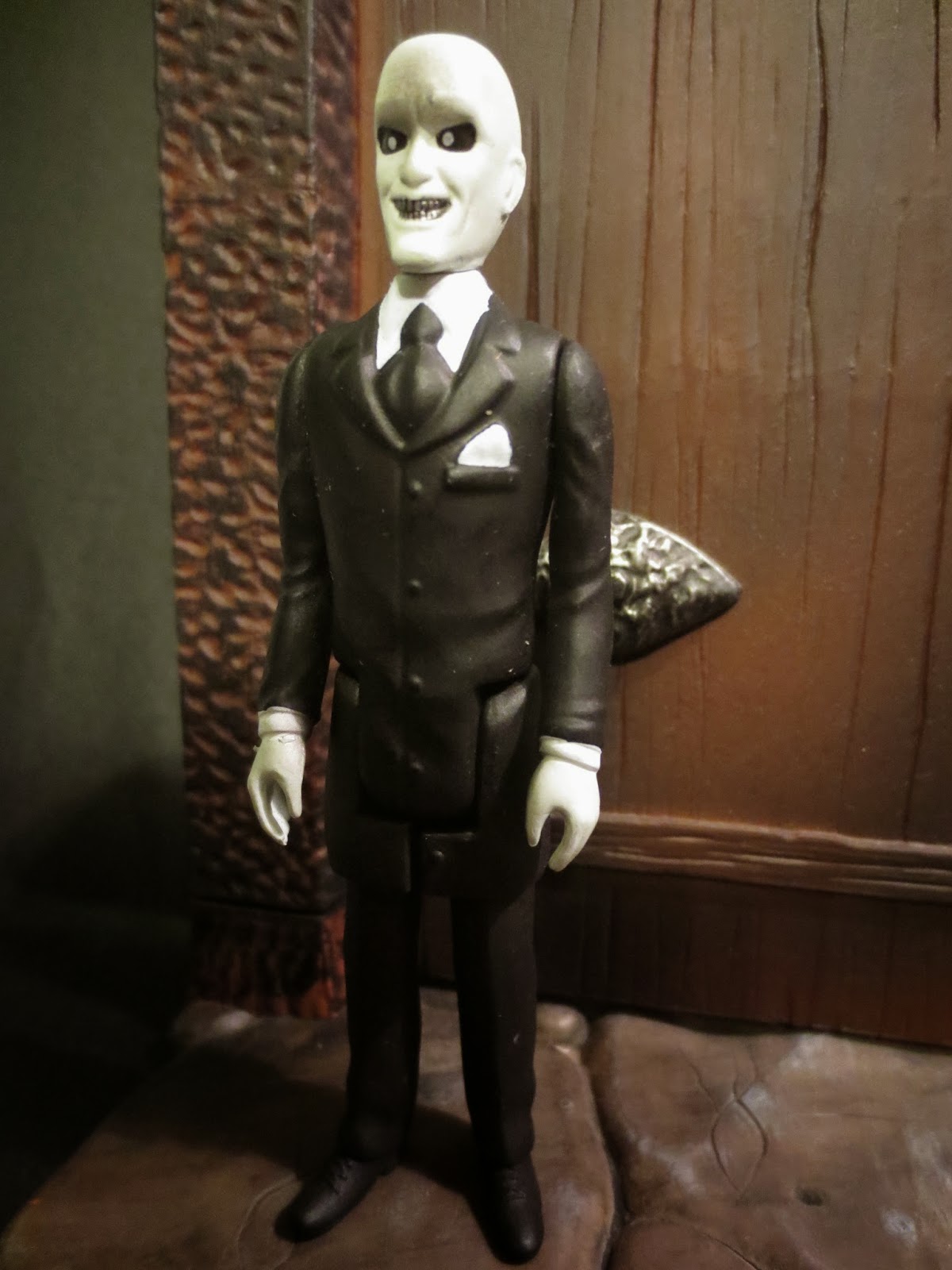 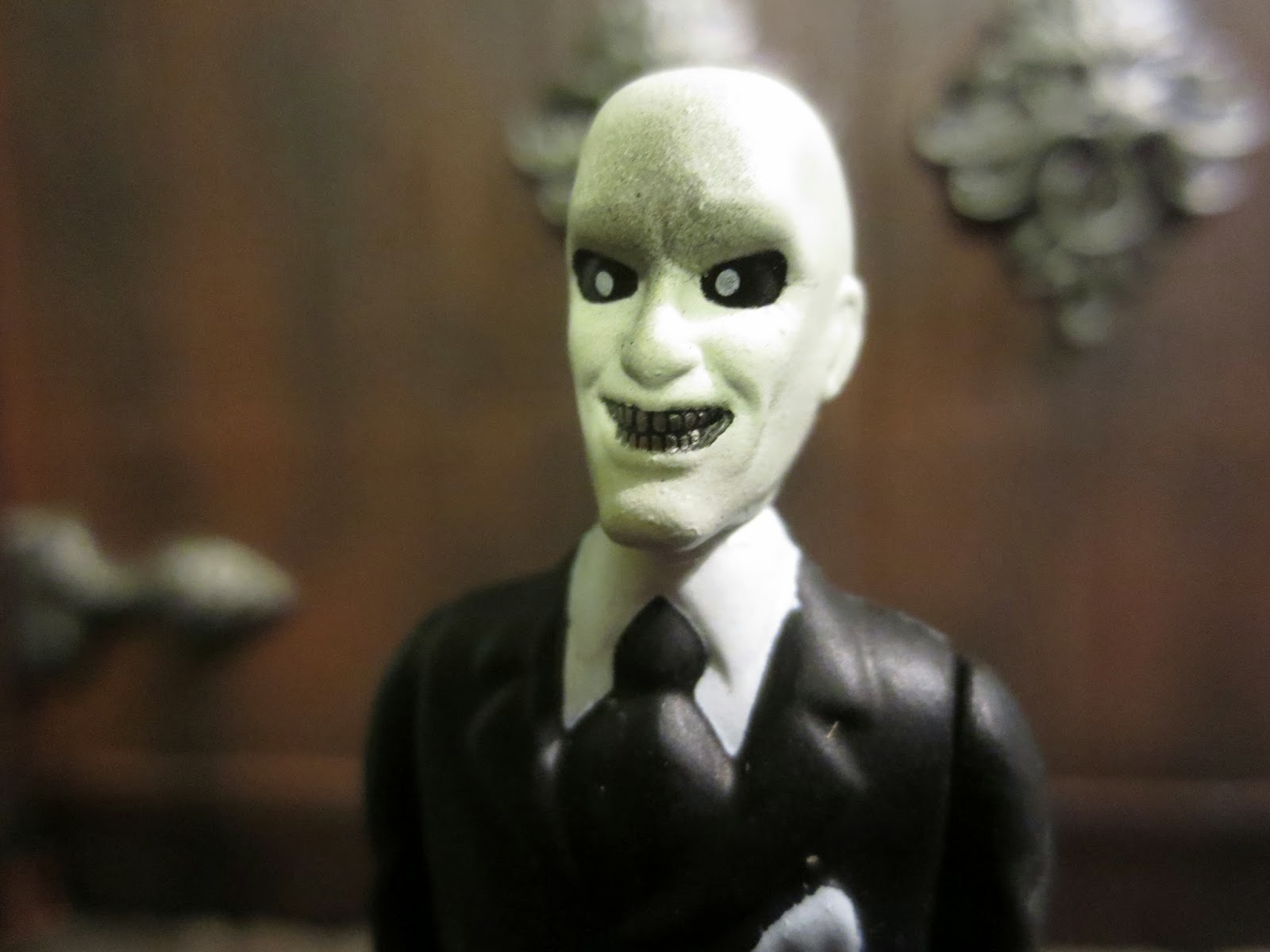 *This guy looks really good in the retro style.Very, very creepy. I think the simplicity of the sculpt really adds to how creepy this toy appears. I mean, imagine some unaware person finding this action figure in loose at a garage sale or flea market? That's got the makings of a Creepypasta right there. The eyes and teeth on this guy are very unsettling. 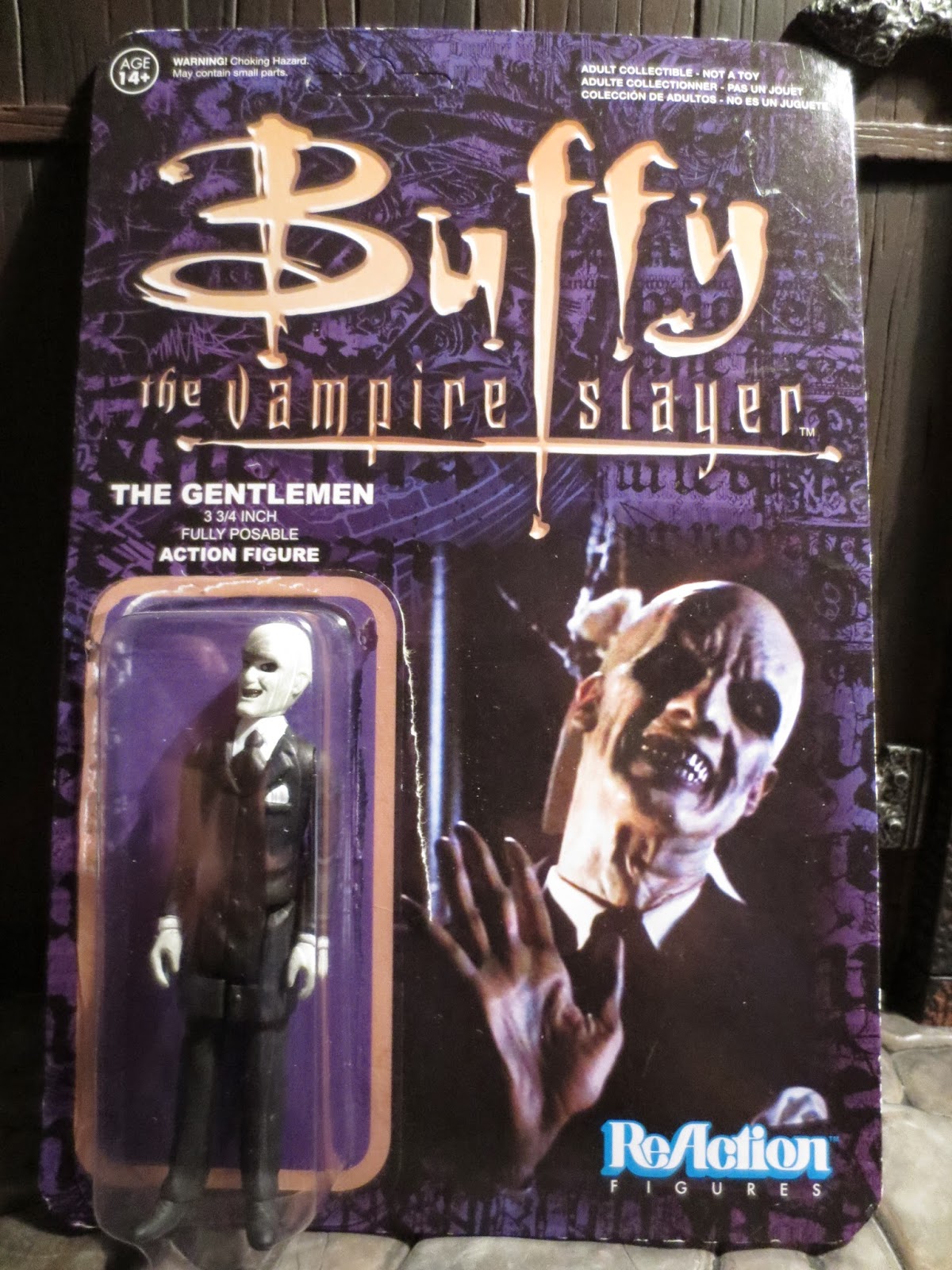 *Funko really handled the long suit jacket well here, as there's very little gap between his legs. Some of the ReAction figures have been less successful in executing things like long jackets, robes, dresses, or cloaks, but the Gentlemen looks just fine. He's a very solid feeling figure and I had no concerns about breaking him when posing him or carrying him around.

*Rarely do I mention the packaging for my action figures but I will for the ReAction stuff as, to me, it's part of the reason for buying this. The Buffy the Vampire Slayer packaging looks good. It has a nice gothic aesthetic with the purple background and a large picture of the character on the front. If you're careful you can cut a slit in the bubble allowing you to remove and insert the figure at will. I've been doing this on all my ReAction figures and it works like a charm. 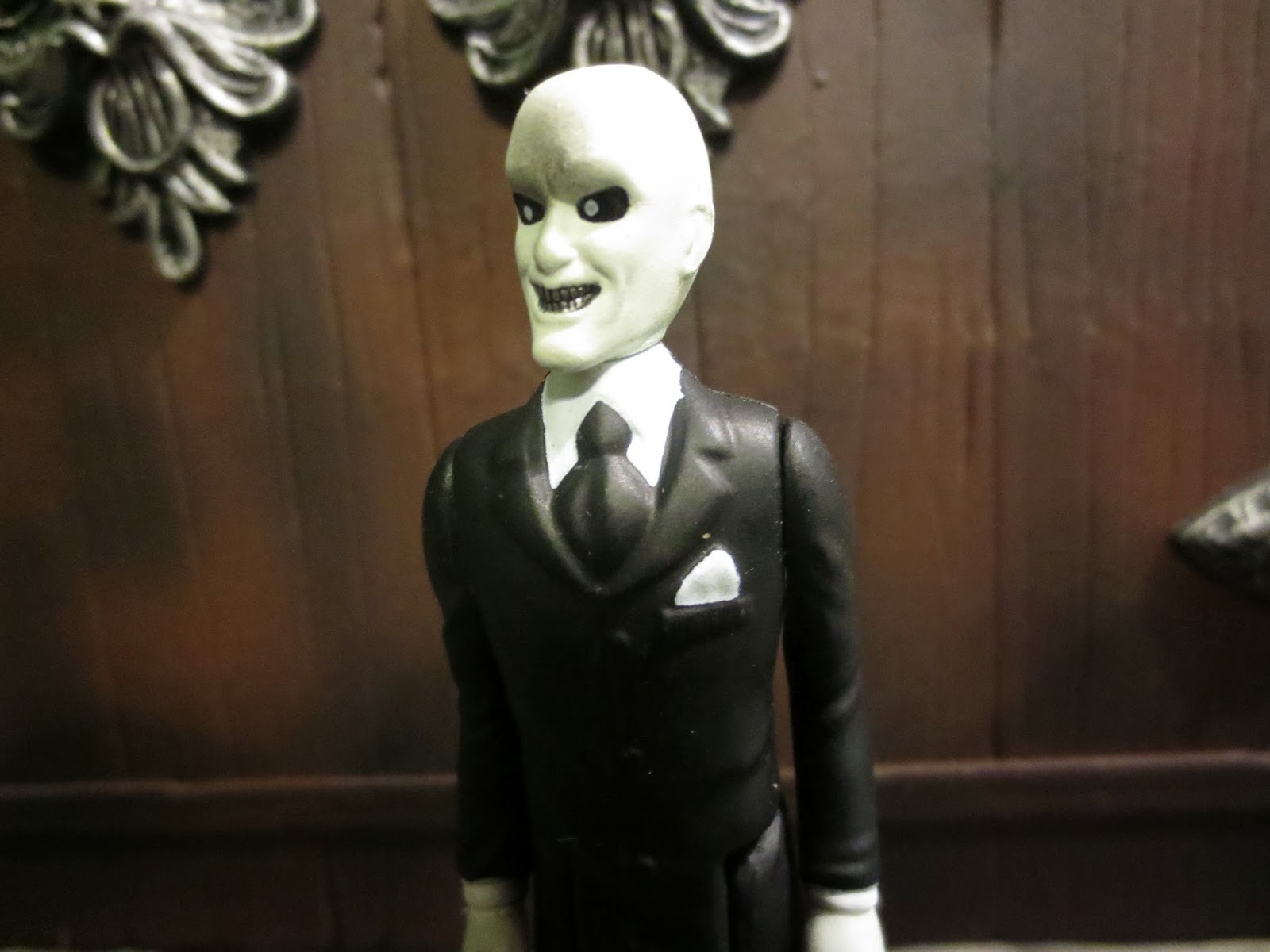 *I really wish this guy came with an accessory. Not having seen the episode, I have no clue what he would come with; I just love accessories, particularly on these retro inspired guys.

*The only real complaint about the figure we have is that I don't like the dark spot on his forehead. The Gentlemen have wrinkly skin in the show and I'm assuming that this was Funko's attempt to add some texture to the faces by attempting a spray of black over the face. It doesn't kill the figure (especially for someone like me who is using this as a Slenderman proxy) but fans of the show might wonder why the Gentlemen have soot on their foreheads.


These retro based action figures have definitely been one of the highlights of 2014 for me. I definitely think they're a style of toy that people either love or hate; I've seen very few folks sitting on the fence regarding them. The Gentlemen is definitely one of my favorites. I love creepy stuff and this guy delivers! I'm actually considering buying a second Gentelmen to redo the head into a more faceless Slender Man action figure, perhaps by either dremeling away the features or using a sculpting compound to cover the features. Anyways, as it stands I'm giving this guy a Great. Compared to other retro action figures, this guy is a boss.


I've reviewed quite a few ReAction and retro styled figures:

ReAction Horror Series by Funko:
Eric Draven from The Crow Freddy Krueger from A Nightmare on Elm StreetJason Voorhees from Friday the 13thMichael Myers from Halloween  Sam from Trick 'r Treat