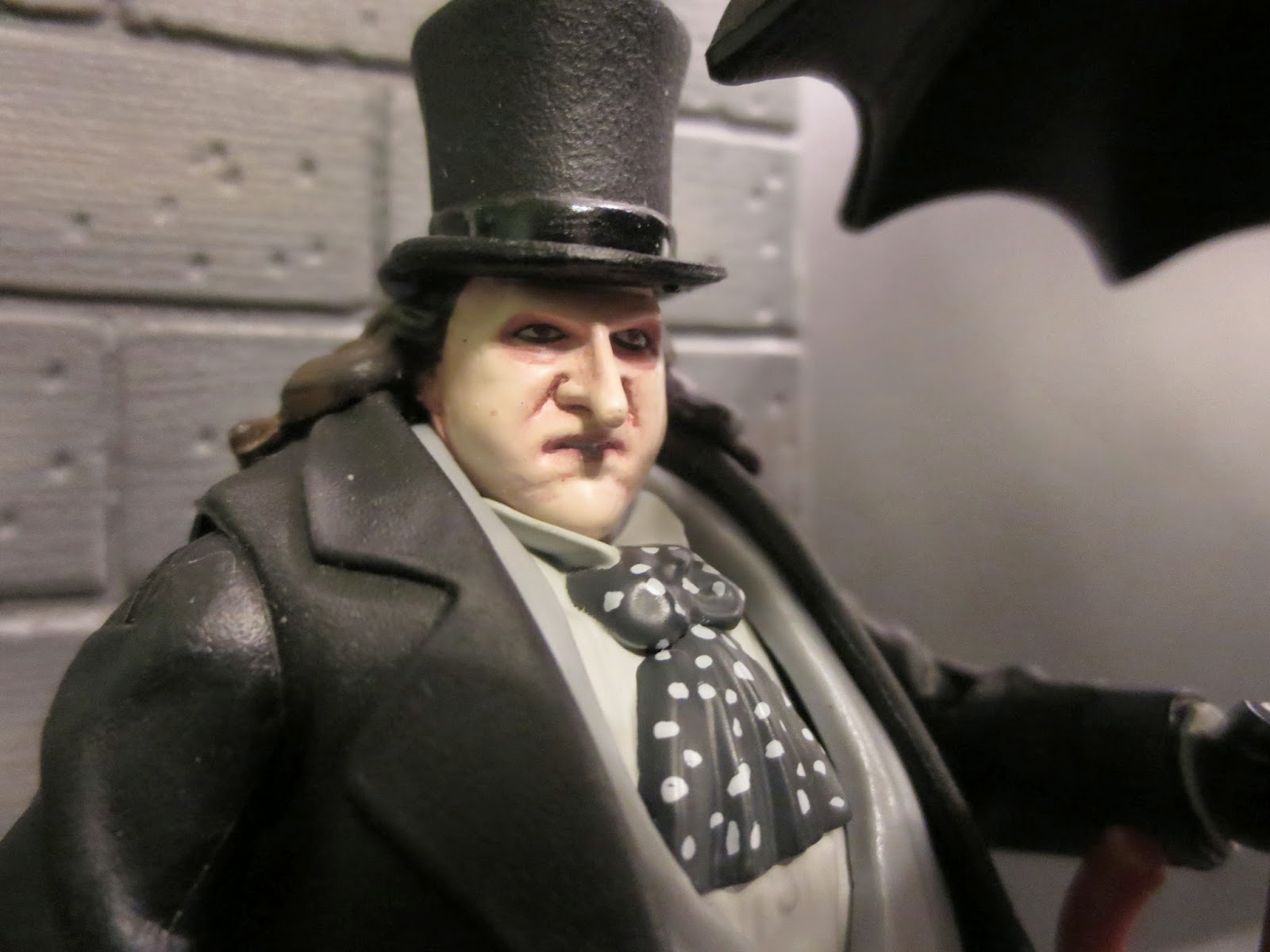 I still have very fond, vivid memories of going to see Batman Returns with my dad when it came out in 1992. I remember a number of details about the experience, including going to KB toys before the film and getting a Toy Biz DC Comics Superheroes Robin, but mostly I remember just how strange and dangerous the film felt to me while at the same time how captivated I was by it. As an eight year old, I'm not sure I'd ever encountered a film scene that left me as excited as Batman Returns' climactic showdown in the sewers. I'd also never seen a film that had villains as menacing as Catwoman and the Penguin. While Catwoman was definitely a femme fatale and a cool character, I'm not sure eight year old me was yet able to comprehend all of Catwoman's appeal or why she "felt so much yummier" but I totally realized just how weird and twisted the Penguin was. I mean, Joker was an insane villain who wanted to kill Gotham, but Penguin wanted to kill babies and drown people in toxic waste. That kind of stuff stands out to an eight year old, y'know? Of course, I'm not really here to discuss Batman Returns; I'm here to talk about the Danny DeVito based Penguin figure from Mattel's fairly new DC Multiverse line that covers a few different DC films and video games. Ready for a look at a version of the Penguin who eats raw fish, bit a guy's nose, and actually had flippers? Then join me after the break... 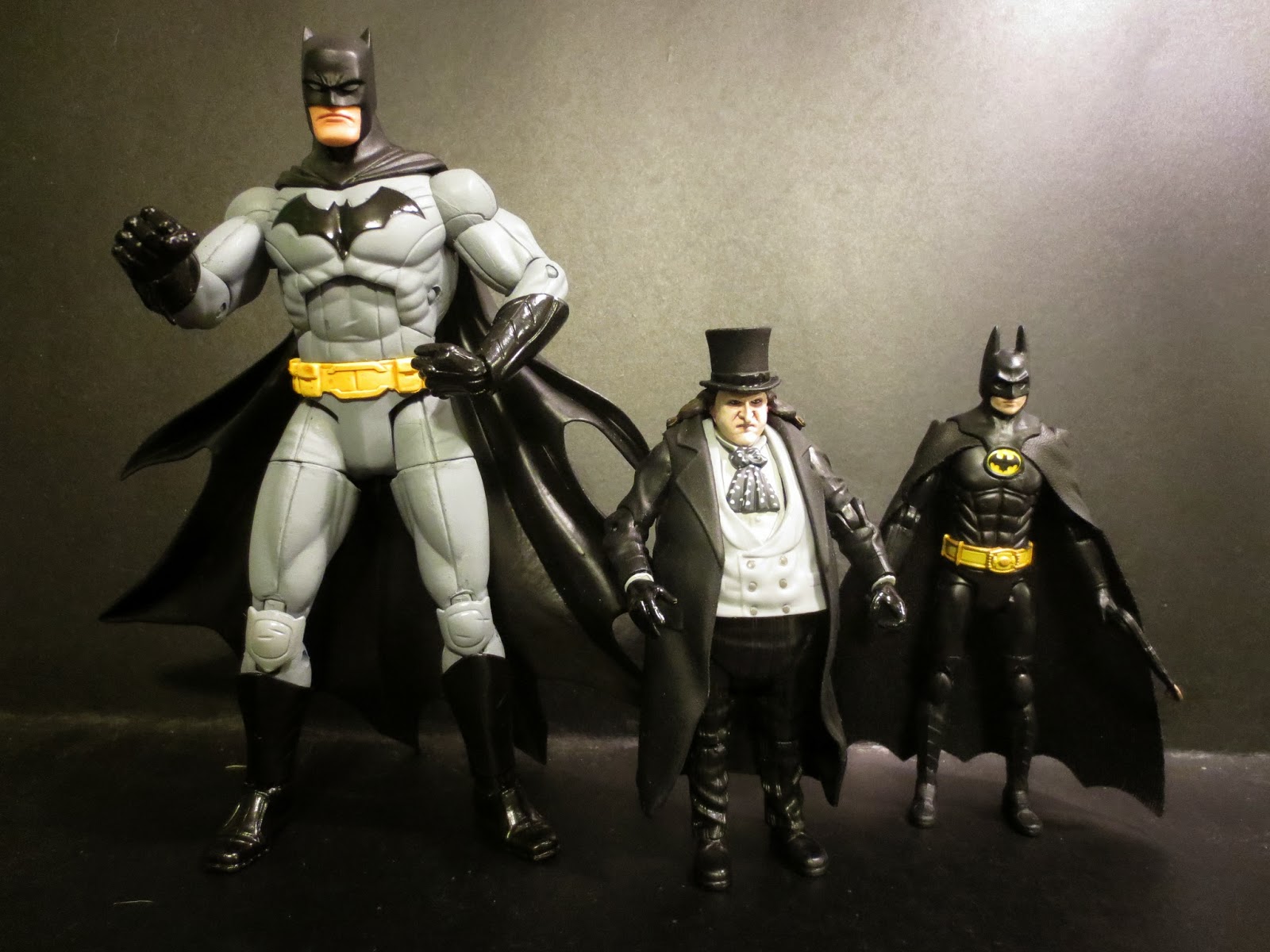 Unless you're counting some other tie in product like perhaps a statue or something from the Warner Brothers Store, I believe I'm correct in saying this is the first Penguin figure truly based off of Danny DeVito's likeness in Batman Returns (the Kenner Batman Returns figure was simply a repaint of the Kenner Super Powers Penguin). That's the reason I bought this figure because let's be honest: nearly every other Batman figure most collectors own is in the 6 to 7 inch scale while this guy stands 4 1/2 inches tall, including his top hat (he's more like 4 inches without it). Unless you're a collector of the DC Multiverse line, the only option for displaying this guy is with your older Kenner Batman figures from Batman: The Animated Series or from the movie based lines. But you know what? Penguin doesn't look half bad with those lines. I really, really wish Mattel would have released this figure in their standard Movie Masters 6 inch scale so he could hang out with most other Batman figures I own, but he does work with the older stuff. He has a fairly realistic sculpt, though, which might make him stand out a bit. 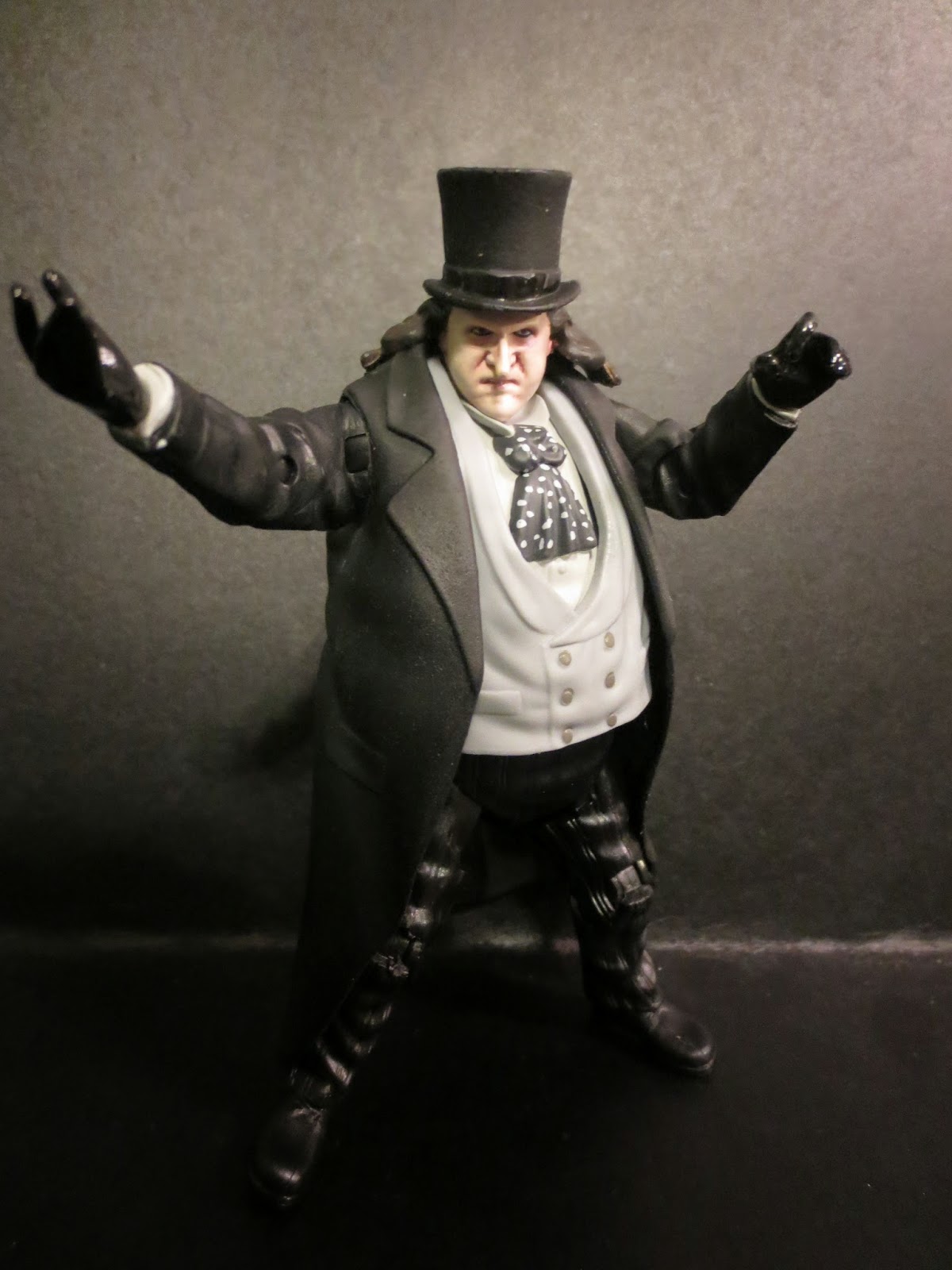 When you think of the Penguin, dynamic poses are not the first things that come to mind (it's probably either Burgess Meredith going "wah wah wah" or that scene where Danny Devito bites a guys nose off) but Mattel managed to squeeze more articulation into this figure than I thought they would. Don't get me wrong: He's nowhere as articulated as your average 1/18th scale figure from Hasbro, but he's not bad. He features: hinged knees, H-hinged hips, swivel/hinge shoulders, hinged elbows, swivel wrists, and a swivel neck. Once again, there's nothing overly impressive here but the arms give a decent range of movement and the figure feels solid and well made. He comes off as a much higher quality product than many other 1/18th scale figures despite his lack of articulation. 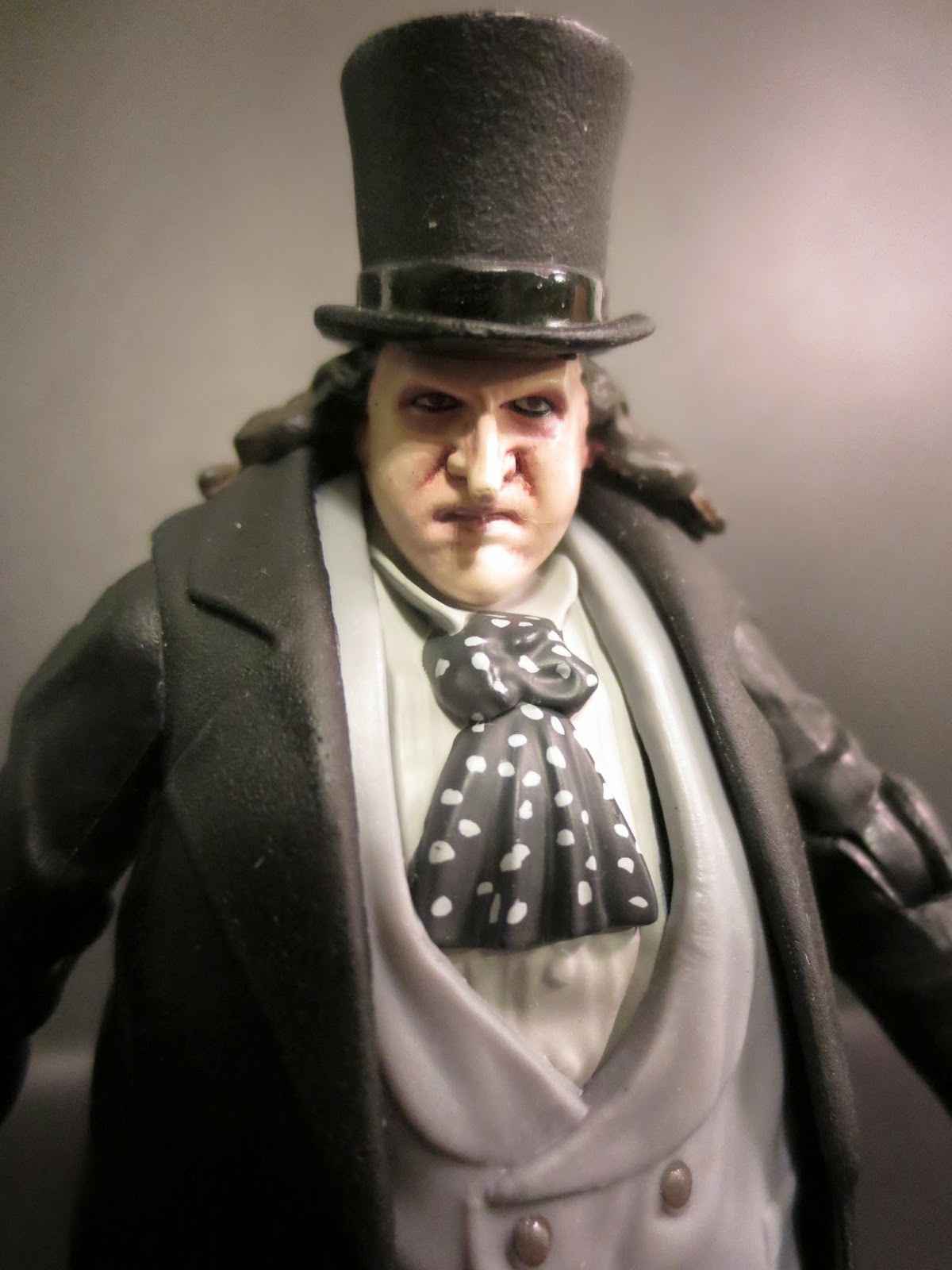 1/18th scale head sculpts can be a really tough medium to capture a character's likeness in but whoever did this sculpting for Mattel nailed it. I mean nailed it. There is no doubt that this is Danny DeVito as the penguin. The nose, the folds in his face, the deep set eyes, the expression: All perfection. I don't know what happened here but Mattel brought their freaking A-game and knocked this guy out of the park. He's wearing an outfit that perfectly captures Cobblepot's sense of style and has plenty of cool little garnishes such as the top hat sculpted on his head, his old fashioned tie, and the puffy shirt he's wearing under his vest. Also, check out his shiny, flipper-like hands. Just awesome! To help increase his girth and to give his outfit a more layered look, elements such as Penguin's overcoat and vest are separate pieces from the main sculpt While the jacket is removable, the vest is not, but both really make this figure shine. 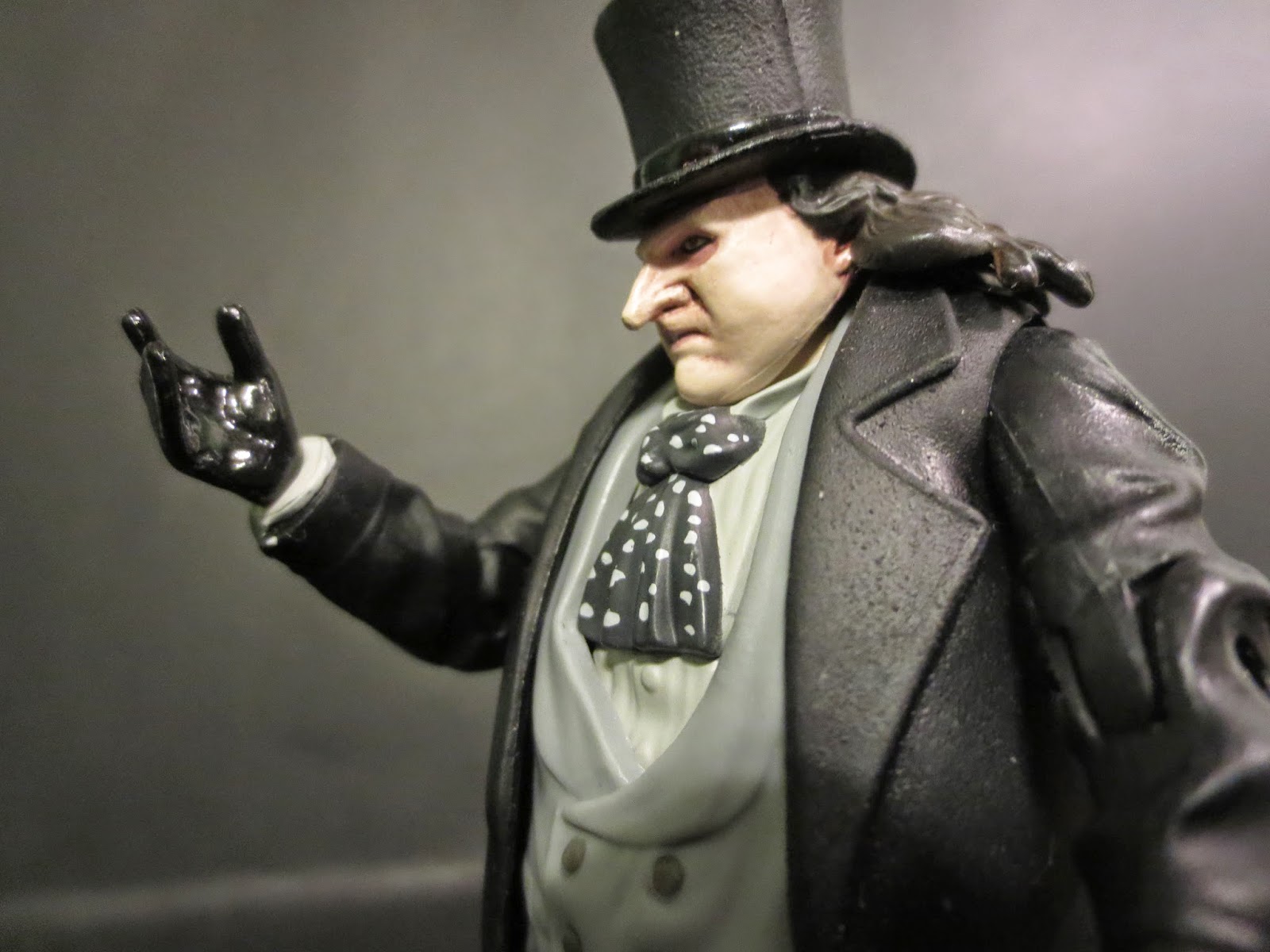 Most of the Penguin's paintwork is simple, but effective. His gloved flippers are a glossy black (as is the band around his top hat) and the bit of his shirt popping out at his wrists has a touch of white paint. There are even some little flourishes such as the buttons on his vest and the polka dots on his old fashioned tie. Everything is solid work for the most part but the paint work on the face, mouth, and eyes is incredibly impressive. I mean, this is just astounding work in this scale. The face is just wicked and incredibly expressive thanks in part to the excellent paintwork that just enhances the detail. 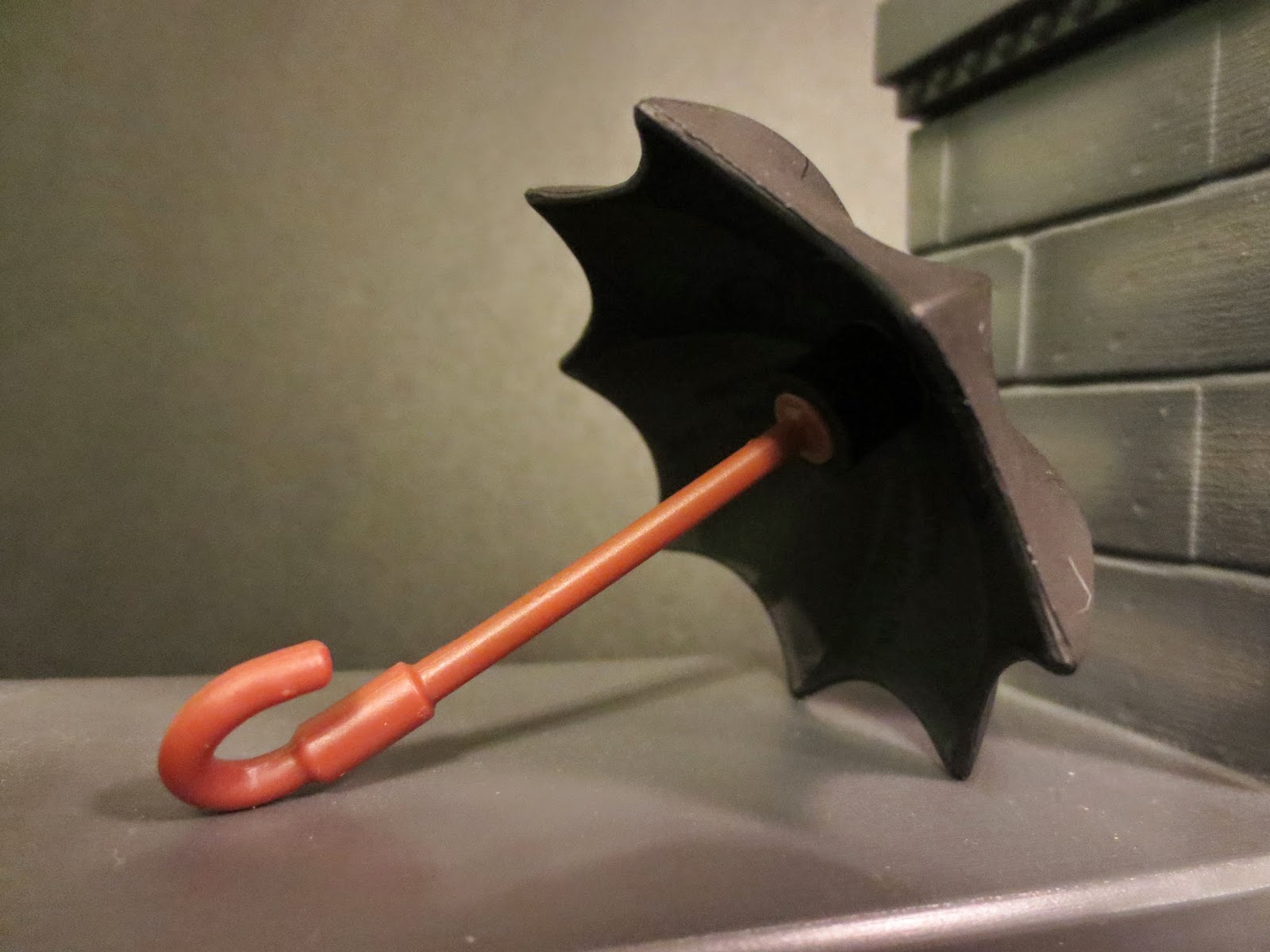 Technically you could remove the Penguin's coat if you so desired (it might actually work for customizers) but otherwise, the Penguin only comes with one accessory: His trusty umbrella. I'm pretty sure there is a law written down somewhere that every Penguin figure has to come with an umbrella and so far it seems that most toy companies are in adherence. This is a decent, if plain, umbrella. I wish Mattel had went with something a bit more interesting like the hypno-pattern umbrella or something. The umbrella is actually made of two separate pieces that can separate (be careful). The umbrella actually fits pretty snugly in Penguin's left hand, as well. 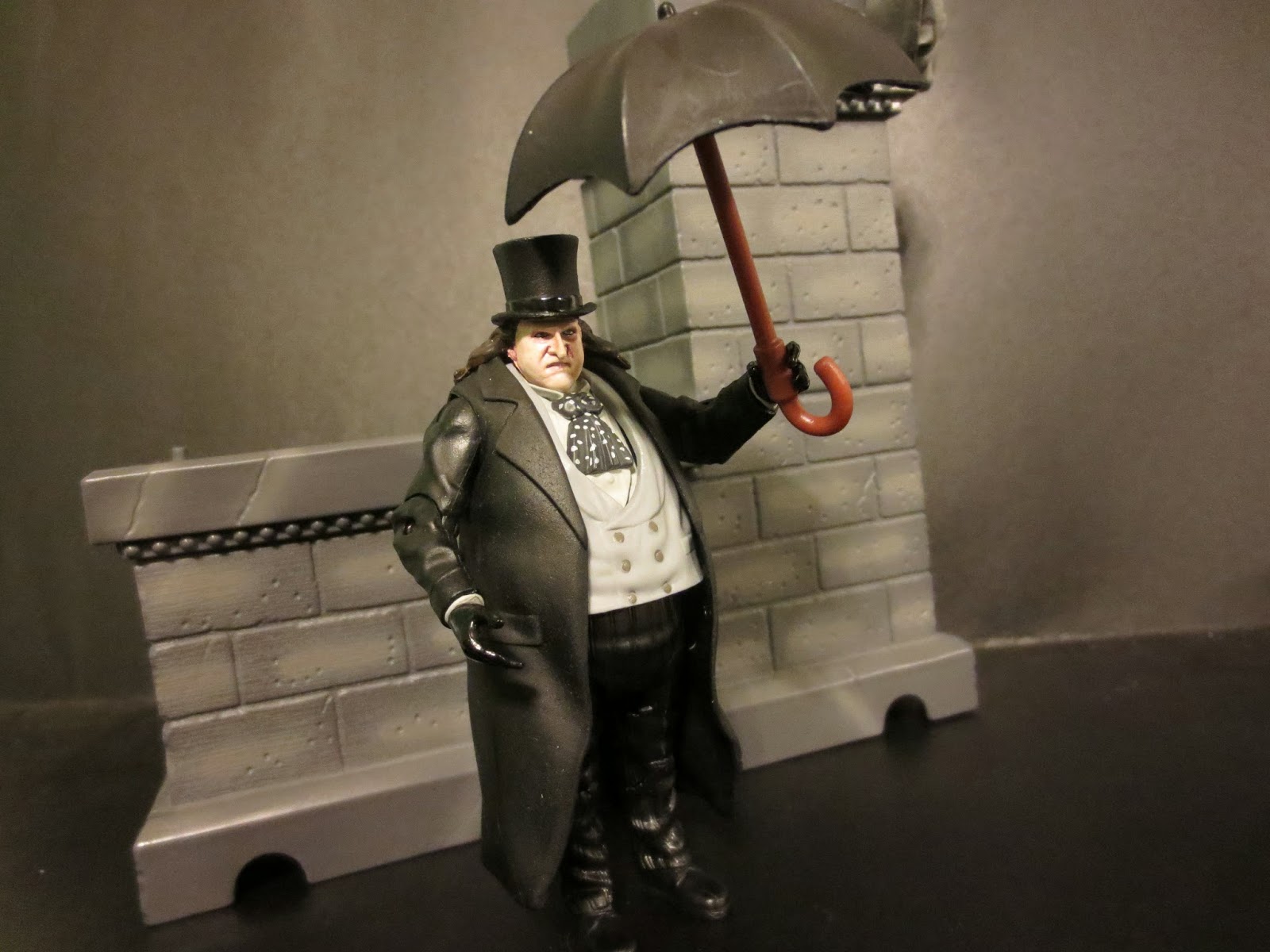 I'm not a huge fan of Mattel's DC Multiverse line. I love the characters they're releasing, but I'm really perplexed by the bizarre "slightly larger than 4 inches" scale they've went with. Not only does this line put figures in different styles together (film and video game based), but they also really cannot fit in with most other Batman based lines that fans collect. Considering that nearly everything Mattel and DC Collectibles have released have been between 6 and 7 inches, it just seems almost cruel to not release a long awaited character like the Penguin in that popular scale. Still, I can't ignore the fact that this figure is incredibly impressive. The sculpt and paint work are just stellar and far better than anything Mattel has ever done in this scale. I'd definitely wager this is the best work in this scale that Mattel has ever done and would put it alongside the best work of Hasbro, the undeniable kings of the 1/18th scale. While I have my complaints about size and would have rather seen a more unique umbrella, I'm still pretty happy with this figure and feel no apprehension in giving him a Great and a 1/2. While I'd still like a Danny DeVito styled Penguin to stand alongside my numerous other Penguin figures in the 6-7 inch scale, I'm just a little bit more content having this guy around.
Posted by Barbecue17 at 12/02/2014