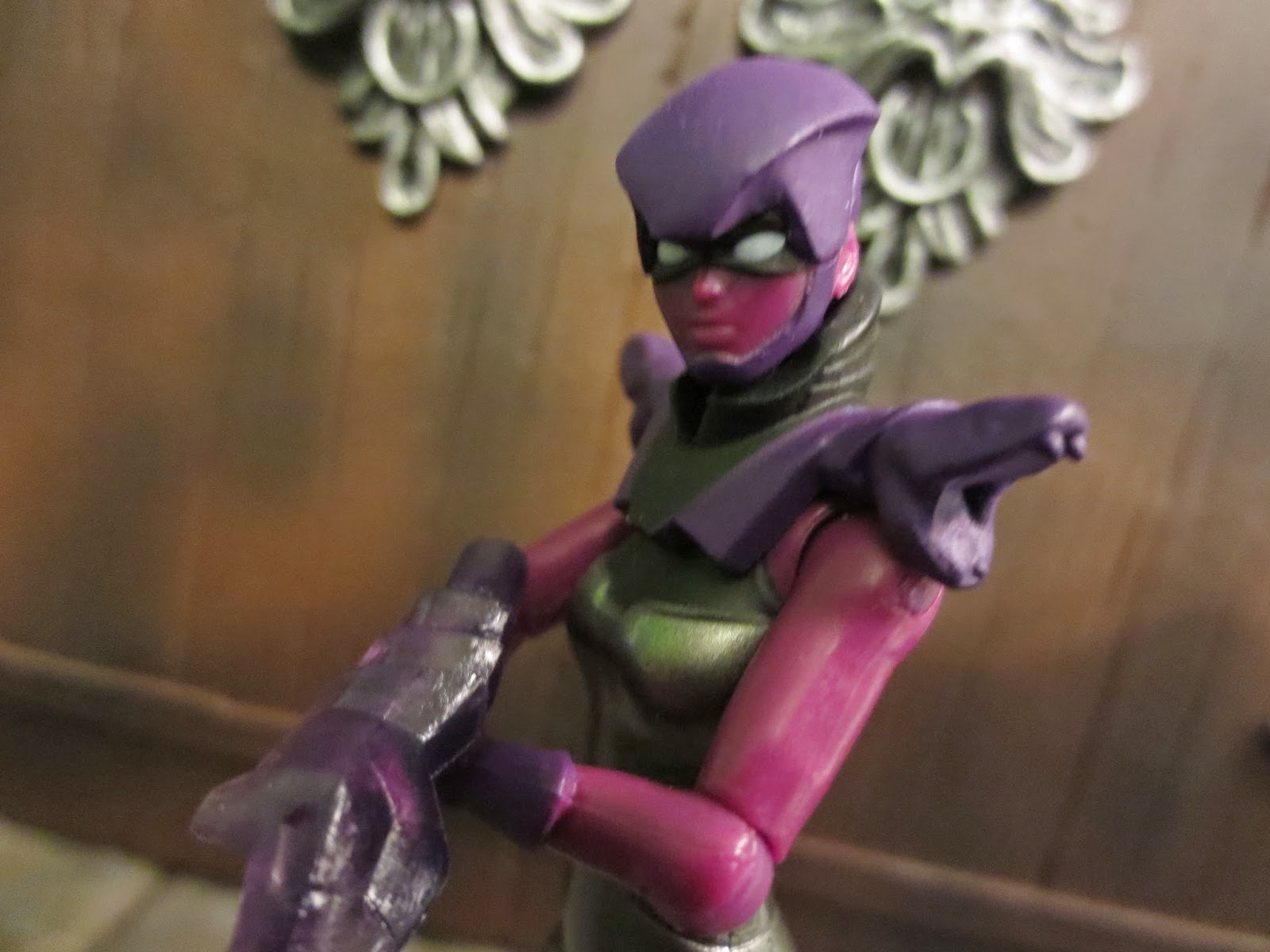 Today I'm looking at the last action figure in the first series of IAmElemental: Fear! I've been spending a lot of time reviewing the IAmElemental line but if you're unfamiliar with it, then check out this review where I discuss in detail this cool new line that launched on Kickstarter in early 2014. There is a lot of reuse in these figures, so some elements of these reviews are a bit short since I've covered the same ground a few times now. Each figure come packaged in a blind bagged style bag but with a checklist on the back. The checklist was marked with the identity of the figure inside so you know who you're getting. I'm not sure if these will be revealed like this at retail, but it certainly seems like a good idea. While the other six figures in this series were all based on more overtly positive elements of courage (Bravery, Energy, Honesty, Industry, Enthusiasm, and Persistence), Fear is listed as an element of Dark Matter. Is Fear a villain? A dark, necessary anti-hero? Just another element of courage? I guess it's up to you to decide. Fear's bio card states: "Fear spreads the impulse to run away and hide. She has the ability to stop a moving object in its tracks." Ready for a closer look at Fear? Then join me after the break... 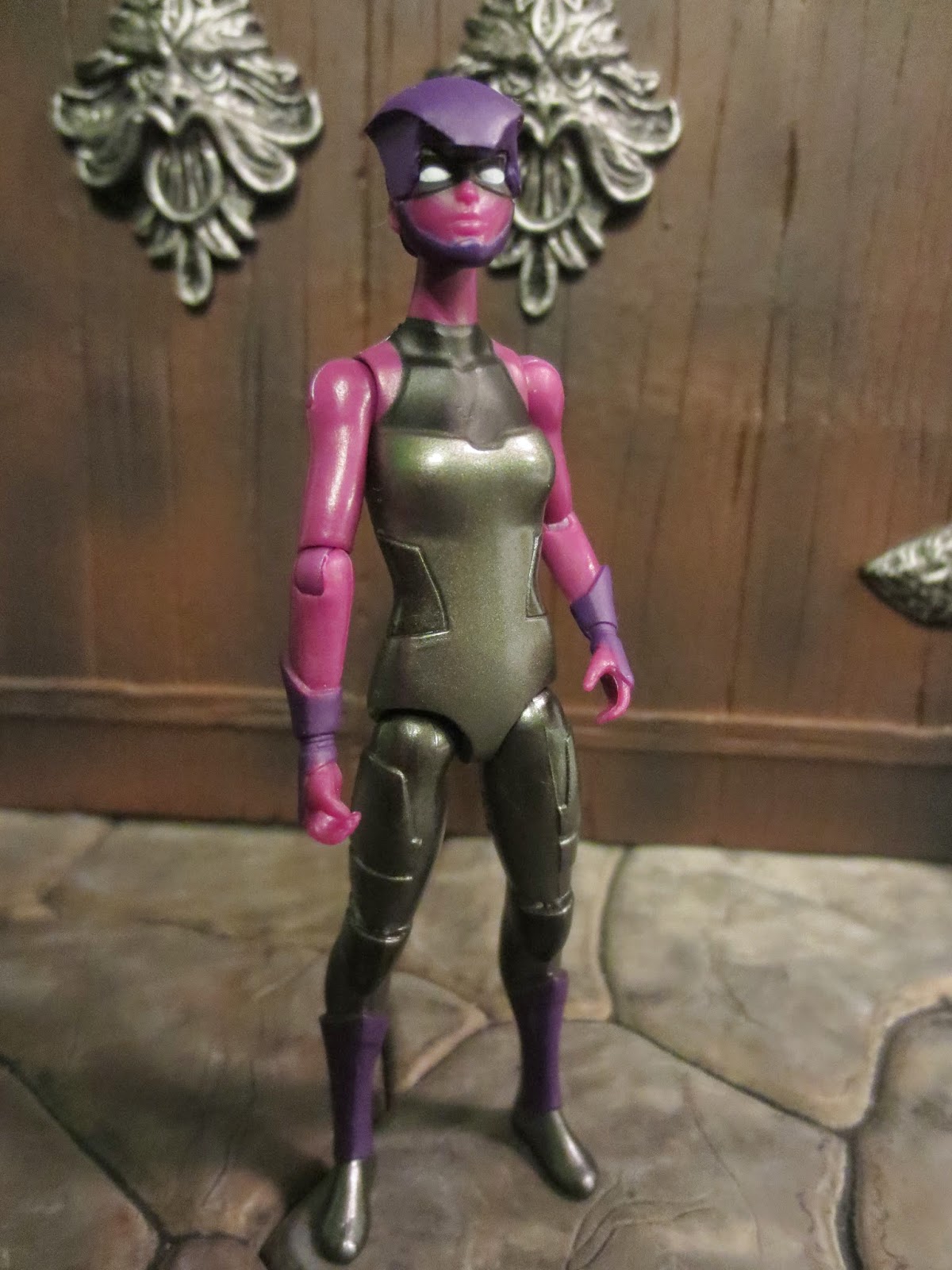 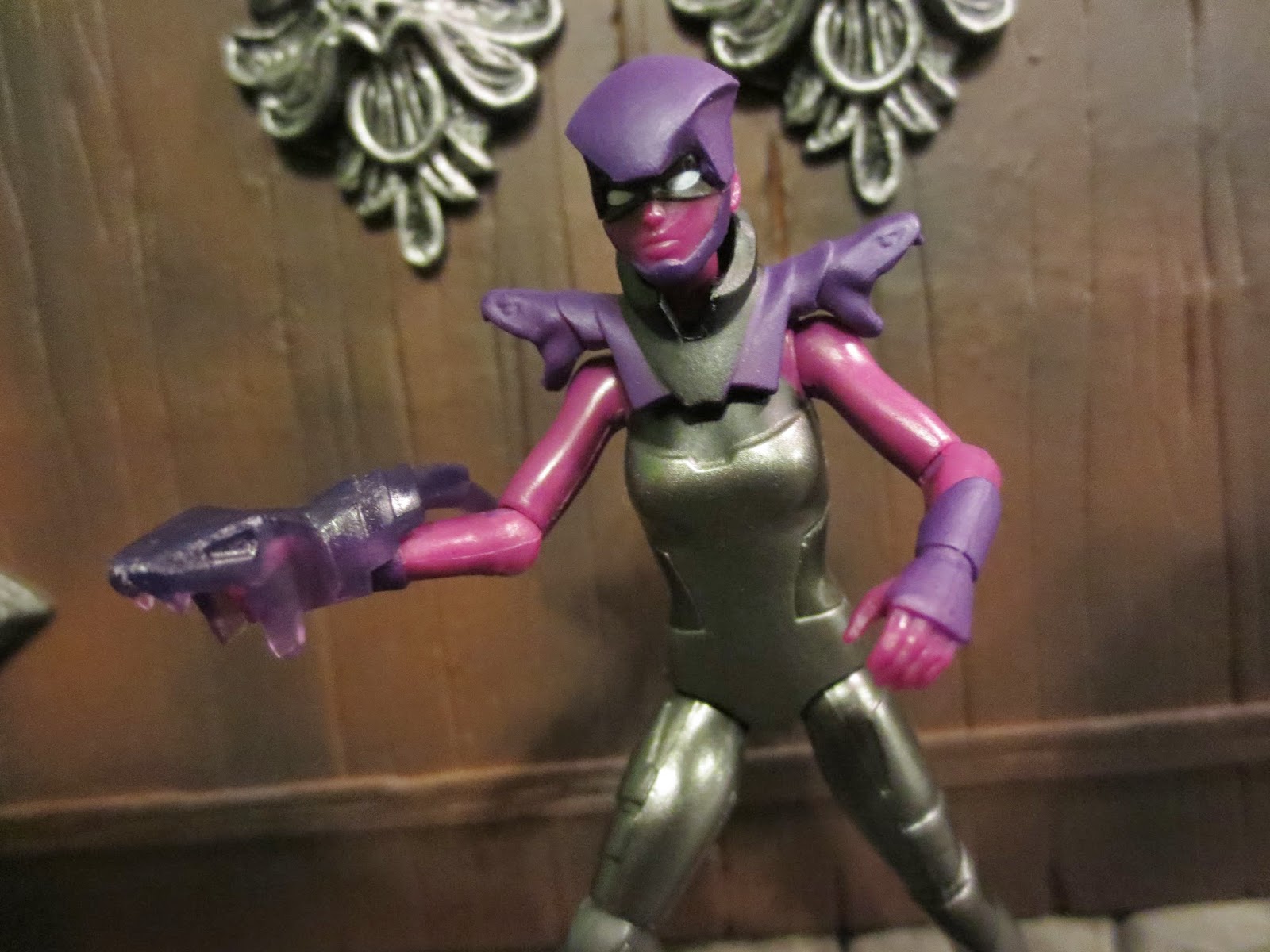 *I'll simply say again that the overall presentation of these figures is rather nice. I'm extremely pleased by the quality of the articulation and the durability of the figure. These figures are really well made and just have a great vibe about them.While everyone else in the line is bright and vibrant, Fear's darker color scheme definitely gives her a unique looks. She makes a great villain or anti-hero for the team. 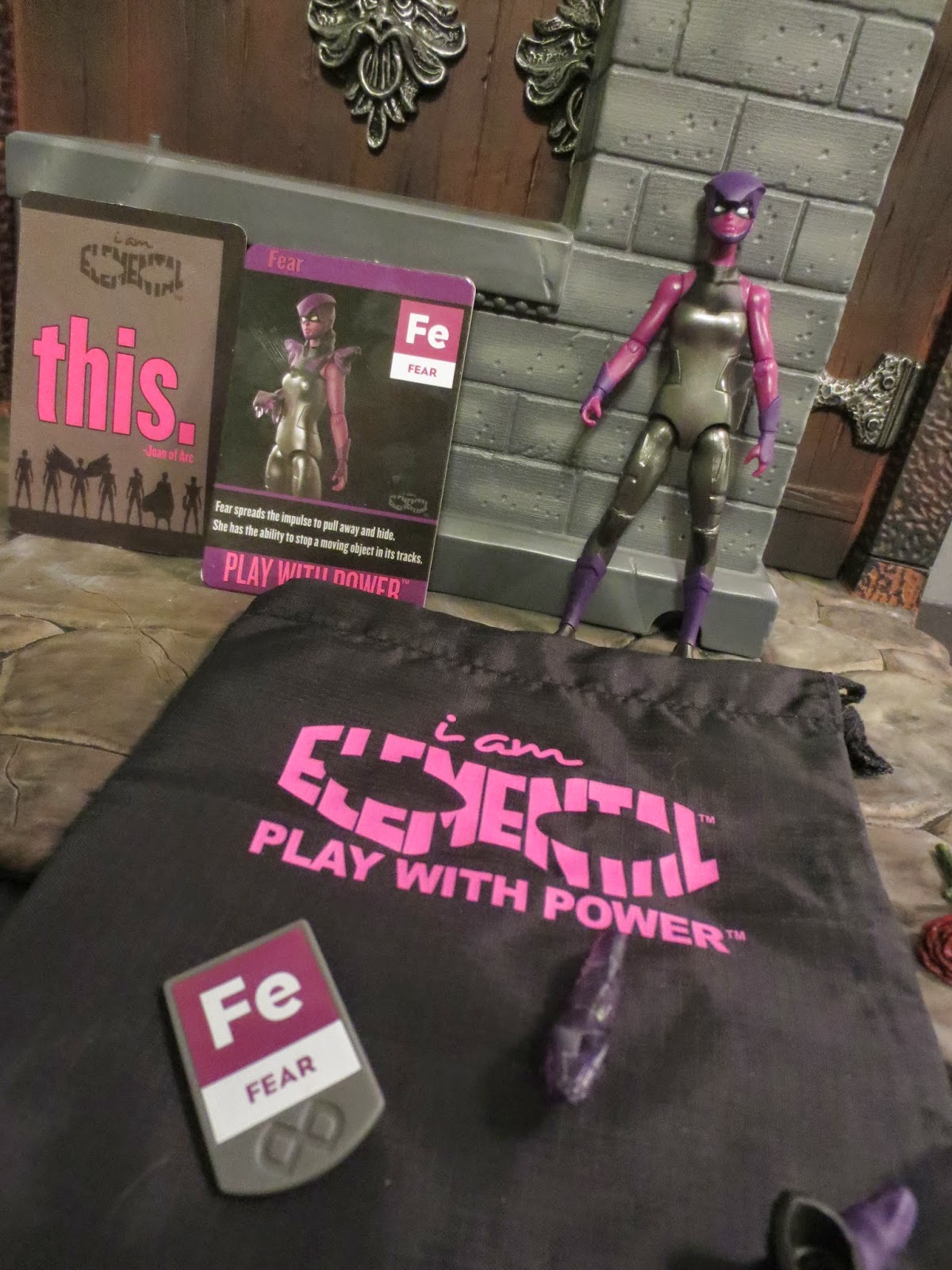 *Each figure is loaded with extras. They're not all traditional accessories, but they are some cool little extras. Fear comes with the line's standard collectible cards, elemental shield, and drawstring bag but she also comes with a snake-like gauntlet and serpent themed shoulder pads that fit over her head. These really play up Fear's element and help to change the look of the figure. 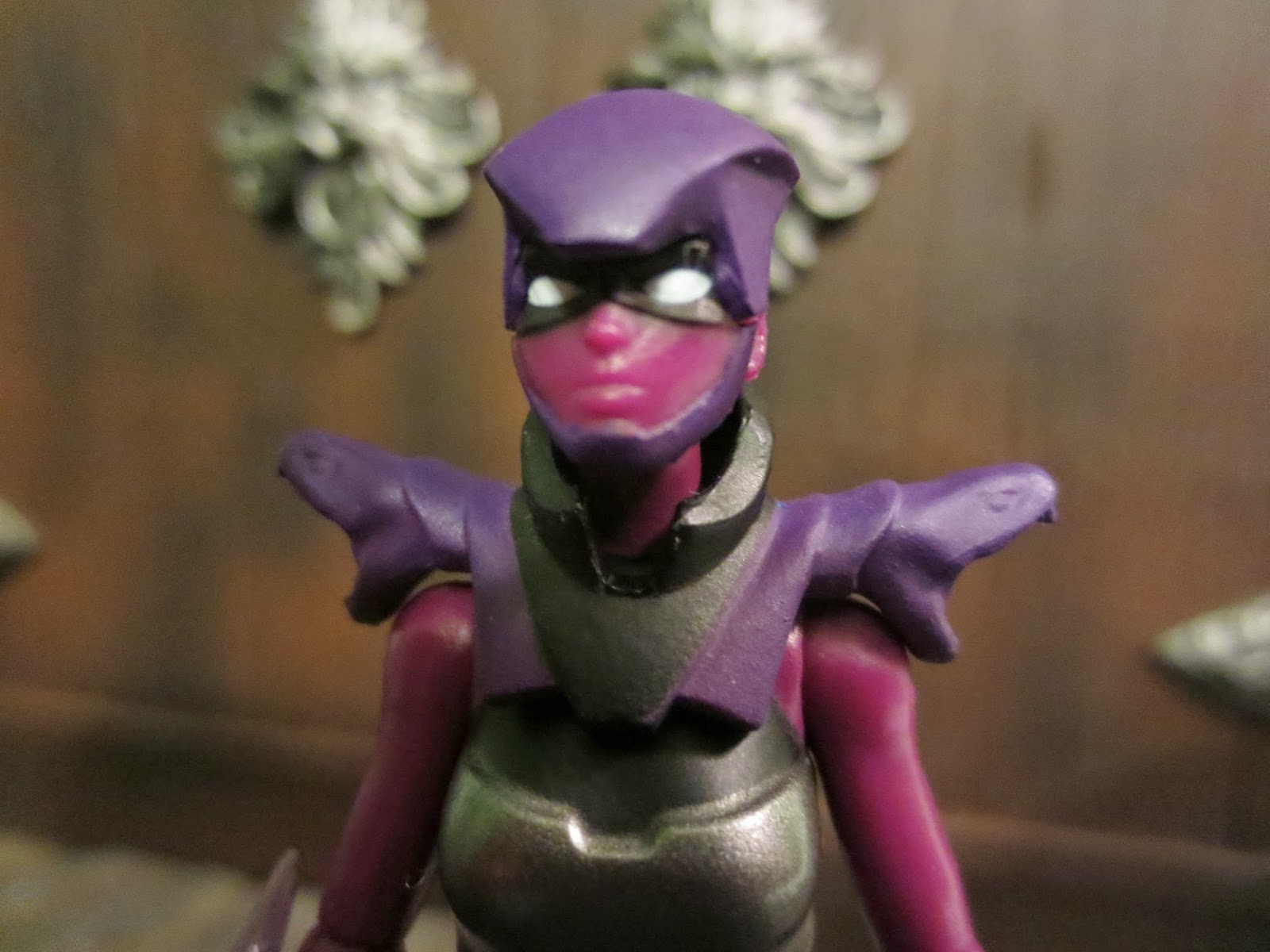 *While they're easy to pose, they are a little tough to stand in action poses. That's not an uncommon problem with any action figures but I do wish these figures had some peg holes in their feet. I've actually been using her shield to stand her on the shelf. It doesn't work perfectly, but it's better than nothing. 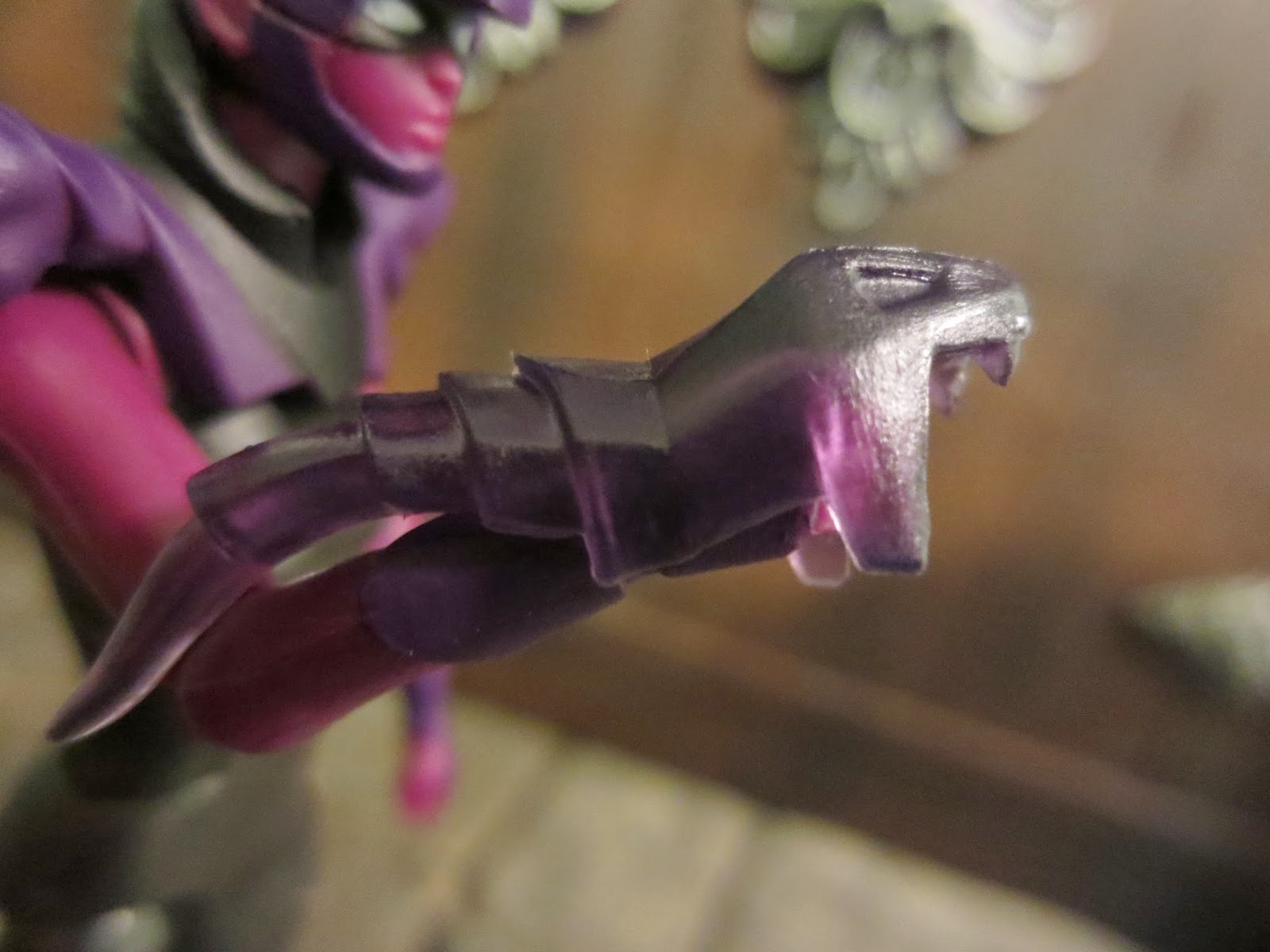 IAmElemental is quite an interesting toyline and Fear really helps to add another layer to it. Her darker purple, black, and gunmetal color scheme is definitely juxtaposed with the brighter, more vibrant colors of the other figures in the line. Fear isn't my favorite figure (that's still Energy followed by Industry) but she's a solid entry and a much needed presence in the line. I'm giving her a Great rating. Having now reviewed every figure in this line, I'm impressed. I've had no quality control issues, no breakage, and the same consistent paint work all around. Rebel Elements has done a nice job with IAmElemental and I'm really excited to see how this line can grow and expand. Obviously I want to see more unique body sculpts and some more exciting accessories, too. This line could have a long lifespan if Rebel Elements keeps it fresh. While I hope they keep the same style, adding swivel wrist joints could also only improve things! If you haven't yet, check out IAmElemental's website and my IAmElemental series overview here, along with other cool Kickstarter toys I've reviewed: