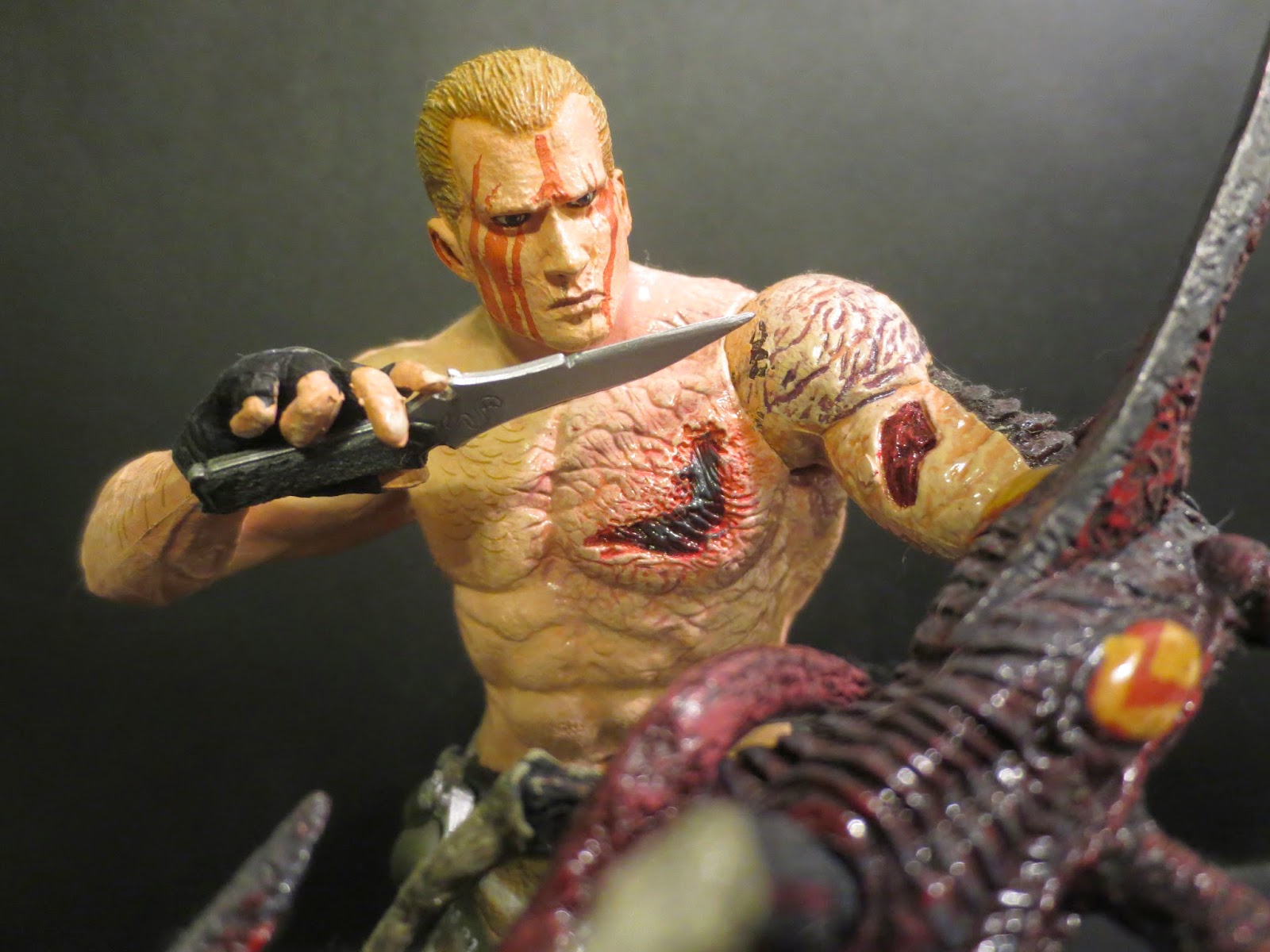 What have we covered so far this year? Ghosts? Check. Backwoods maniacs? Double check. Storytelling corpses? Check. Mutated super-soldiers? Nope. Time to remedy that, then. For day 13 of 31 Days of Toy Terror we'll be looking at Krauser from NECA's Resident Evil 4 action figure line. When Resident Evil 4 came out for the Nintendo Gamecube in January 2005 it was a big deal. While it strayed quite heavily from the series' roots, it offered something fresh and new not just for Resident Evil but for video games in general. To follow up their first series of action figures based on the game, NECA released a second series in mid 2006 that included four variants of the Illuminados monks, Garrador, two versions of the Iron Maiden, a RPD suited Leon Kennedy and, the subject of today's review, Jack Krauser. Krauser is in the process of being mutated (kind of like how he appears in the Mercenaries minigame) and it definitely is a more interesting look for him. Ready for a look at a mutated super-soldier with a funky arm? Then join me after the break... 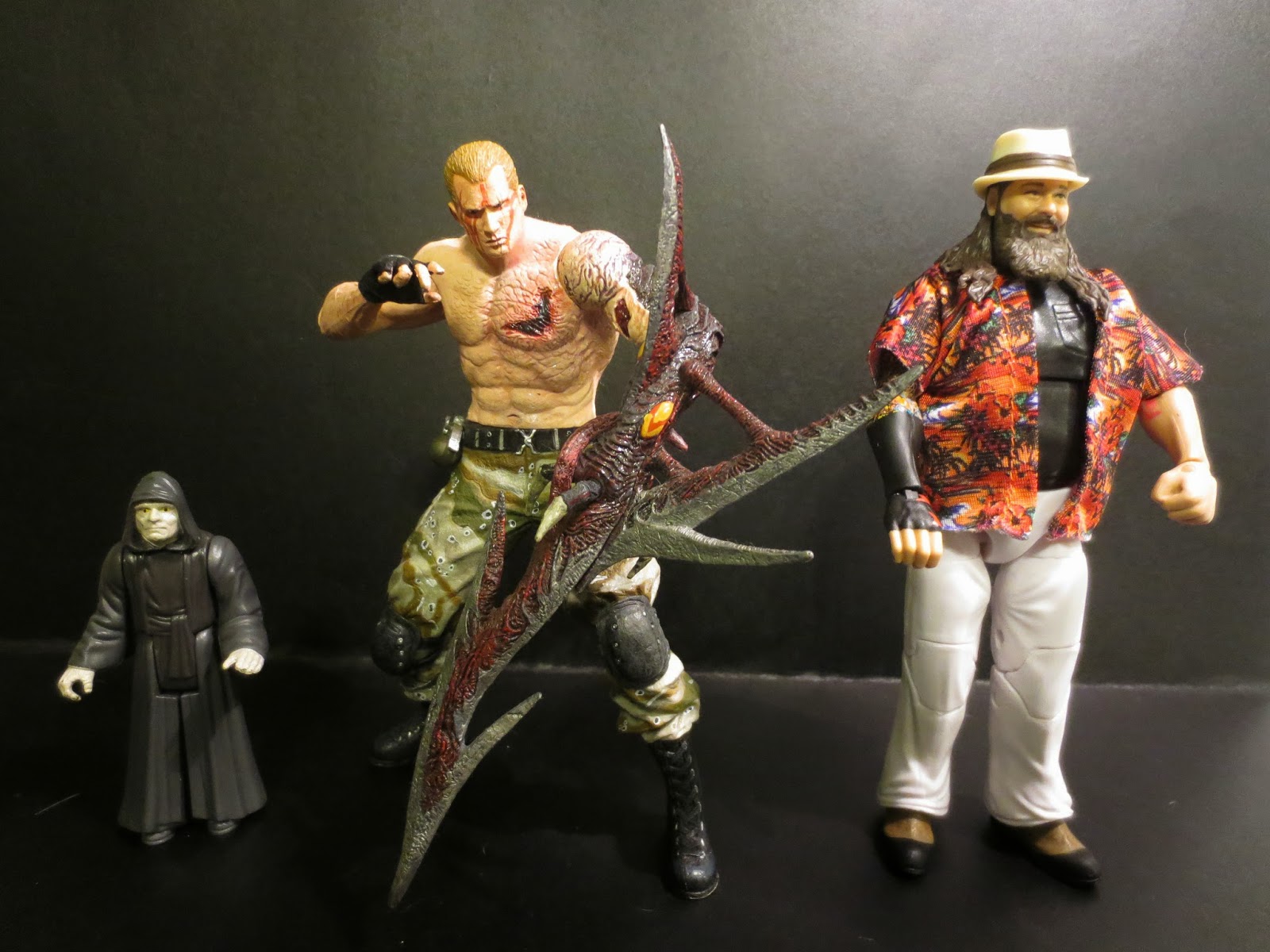 Krauser stands a little under 7 inches tall, but he's also in a wide combat stance with his knees bent. If he weren't crouching, he'd be closer to 7/2 or 8 inches tall. Krauser looks awesome with NECA's other Resident Evil and video game based figures but he is a bit too large to truly fit in with figures from Palisades and too small to fit in with figures from Moby Dick. That's been one of the problems with Resident Evil toys: Multiple companies have made multiple characters in differing scales. It has been a real pain for collectors. The style is realistic enough that he wouldn't look out of place next to figures from Cult Classics or Movie Maniacs, either. 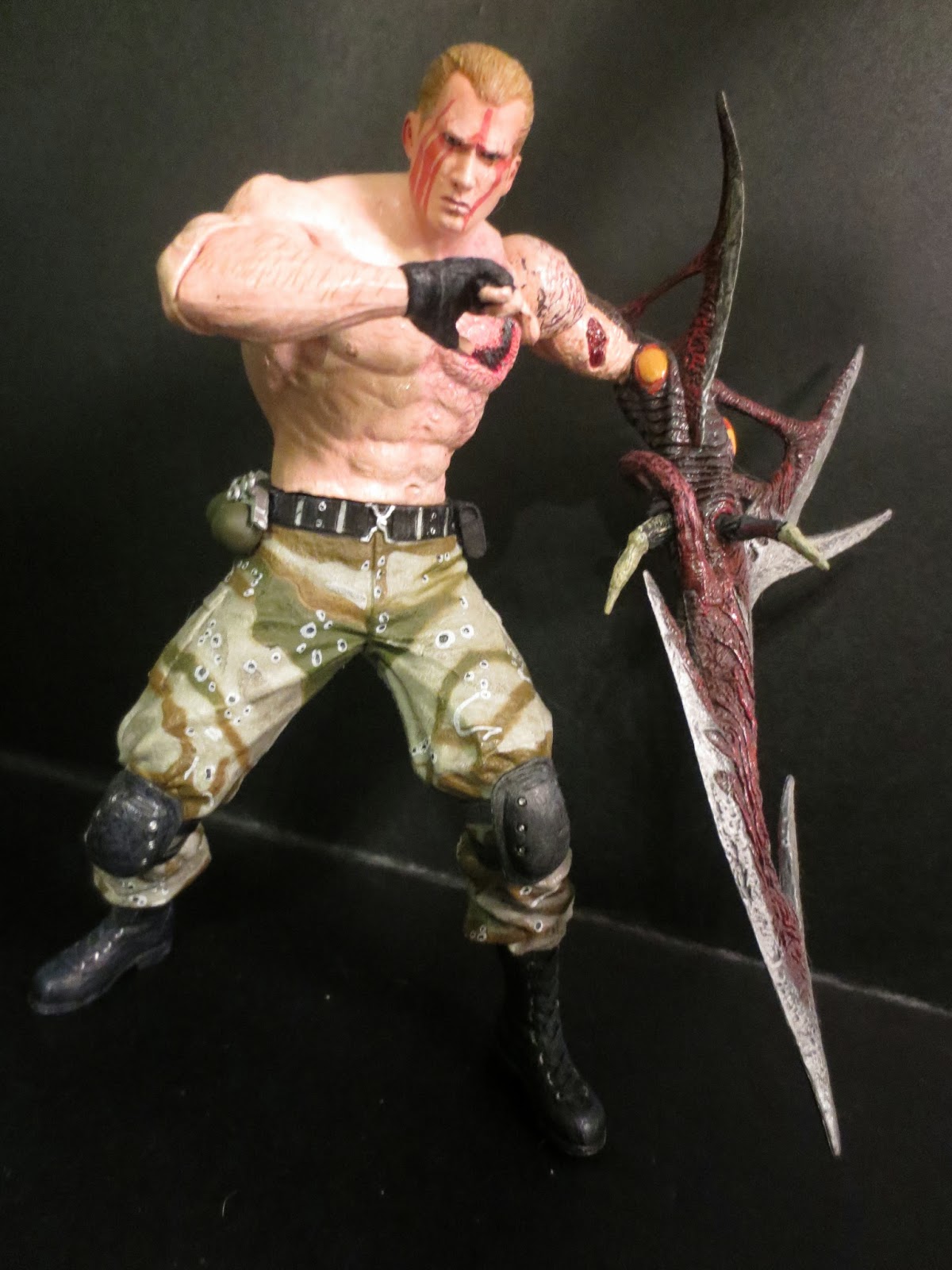 Krauser comes from back in the mid 2000s when articulation was pretty limited on NECA's action figures. He really has one basic pose that you can augment subtly. Krauser features the following points of articulation: Boot swivels, a swivel waist, right elbow swivel, a swivel right wrist, a ball jointed left shoulder, and a ball jointed head. While Krauser is always stuck standing with his left arm largely pre-posed, you can get a few different looks if you tinker around with his left shoulder, waist, and head. He does look very cool as NECA found a great, dynamic look for him, but if you're accustomed to being able to play with your toys, you'll be disappointed. Overall he feels like a solid toy (not brittle like many toys of this era) although one of the grenades glued to his belt did come off recently. A little glue fixed it, though. 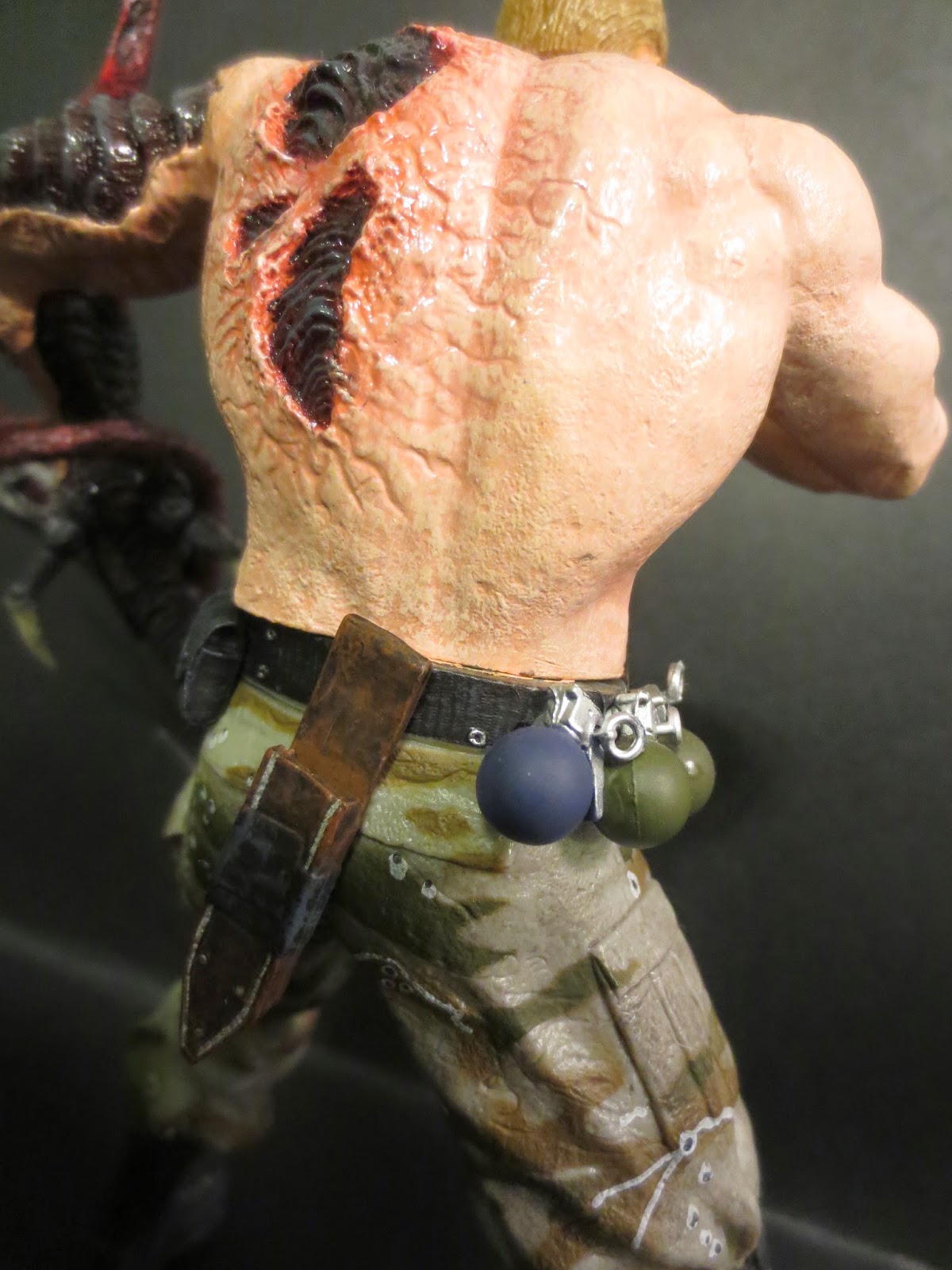 The sculpt is great. NECA captured a great pose for the character and covered that with some insane detail. While articulation and realistic portraits have improved over the past few years, I don't know that we're seeing sculpts as detailed and unique as we were getting back in the mid-2000s. The pants are not just covered with wrinkles and seams; they actually have a texture to them that mimics camouflage pants. Krauser's torso and arm are insane with an intricate level of detail. I particularly like the patches of flesh on his torso that have been torn away to reveal his inner mutant form. Other added elements such as knee pads, a working sheathe on his belt, and three grenades on his hip just give this guy an almost mixed media feel. I know it's not really mixed media, but it definitely captures some of that charm. 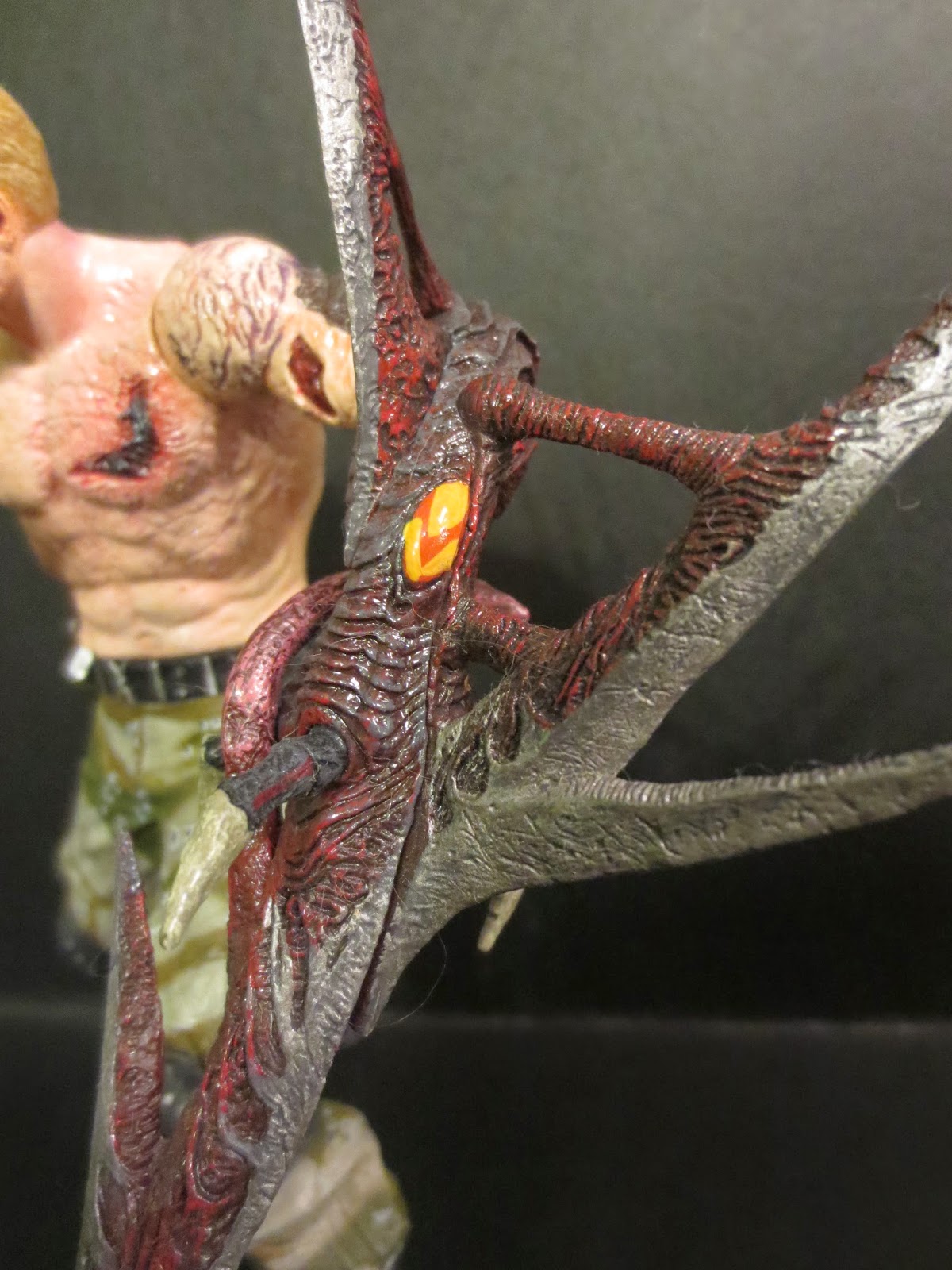 The paintwork is also impressive. While NECA hadn't yet captured the eerie realism that they would achieve with their Rocky and Predator figures, they still managed to portray this character effectively. The torn flesh and exposed skin, while consisting of multiple different paint apps, has a wet look to it. The camouflage pants are also insanely detailed and feature an extremely intricate pattern. The attention to detail on the arm also looks rather impressive. Since this was based on a video game render and not a real person or prop, NECA had some room to get creative and it shows. 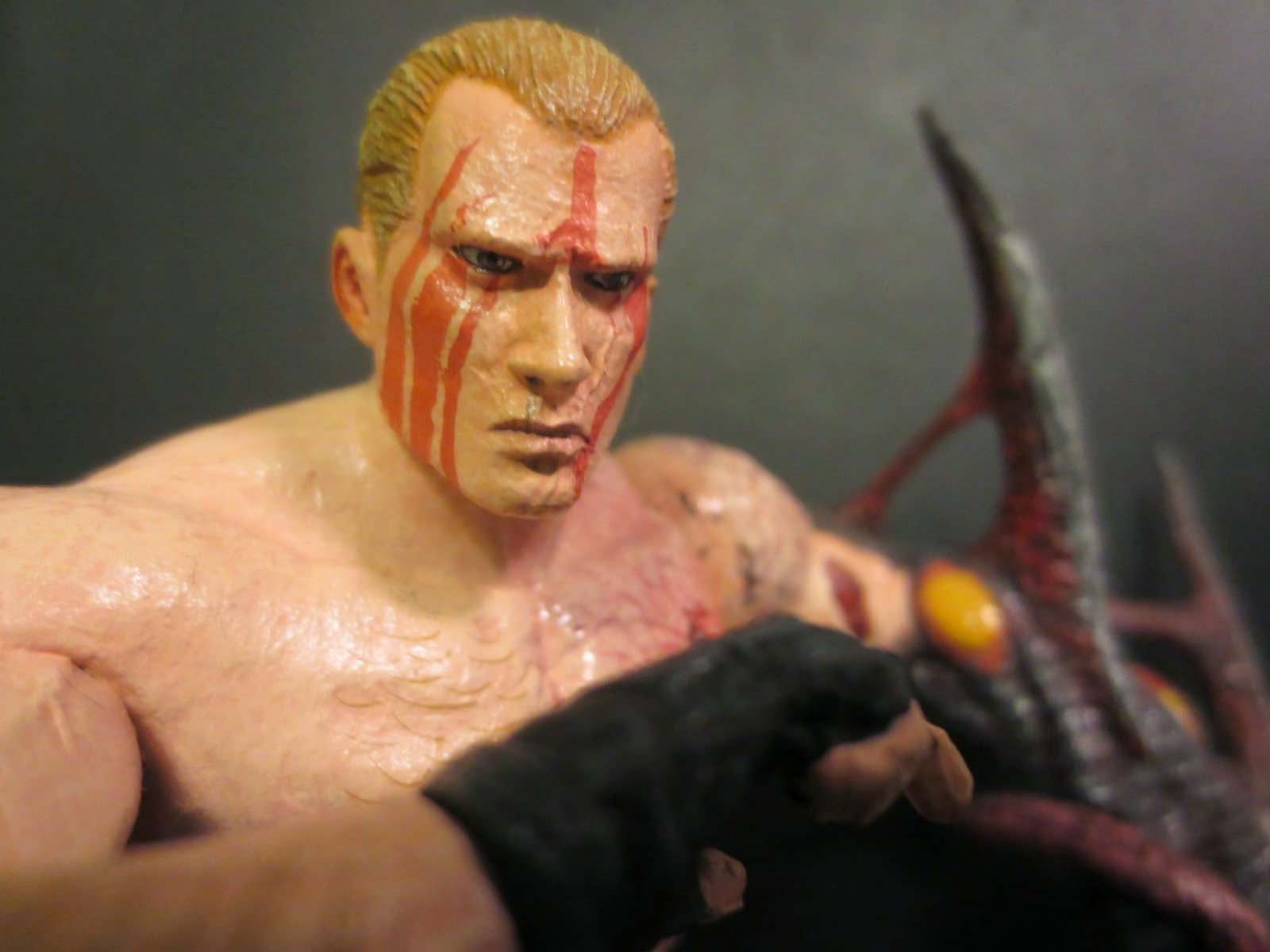 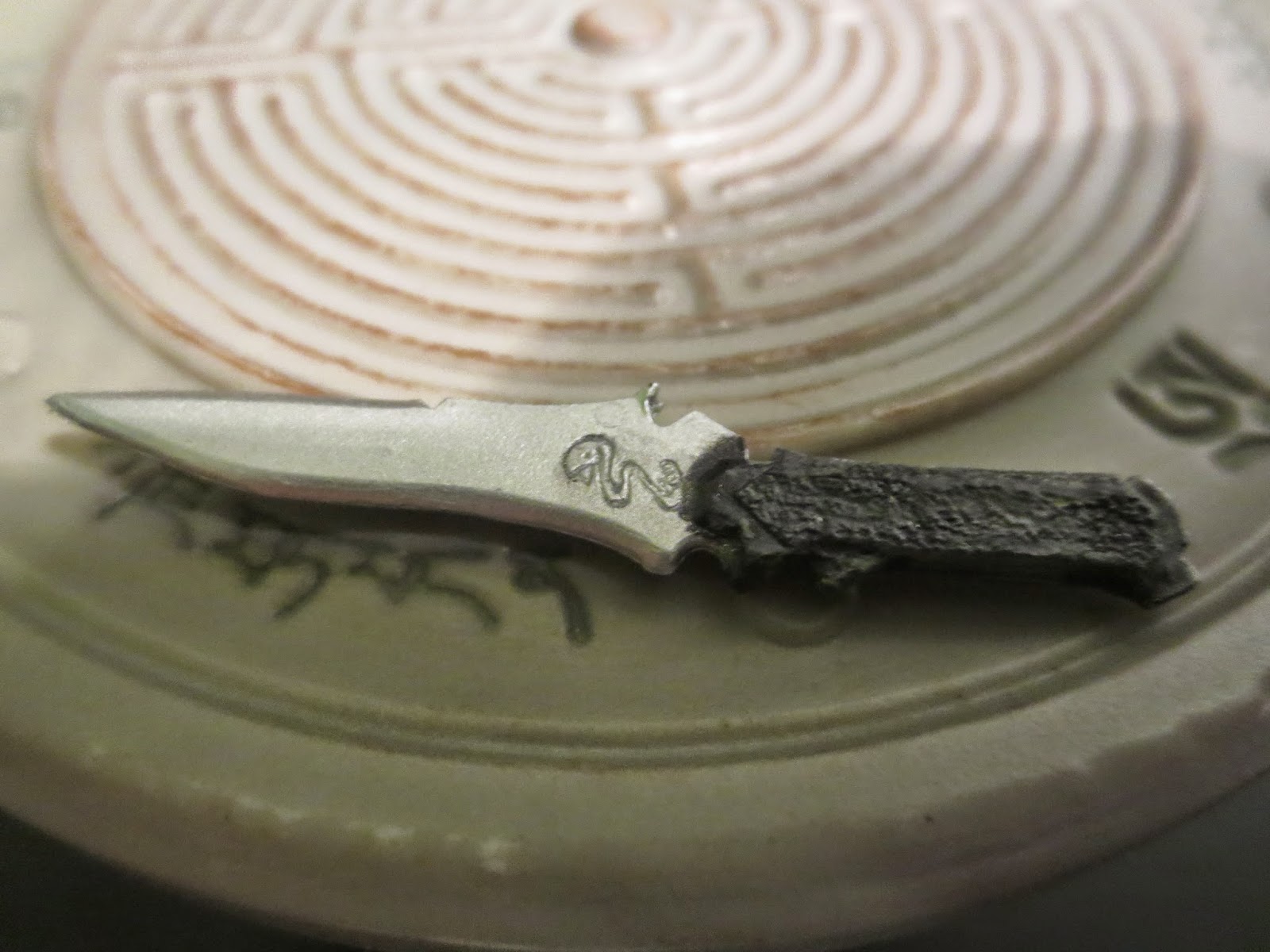 While the human figures came loaded with accessories, the more monstrous characters were a bit less equipped with guns and stuff (they had claws, blades, and sharp, sharp teeth instead). Krauser falls more in line with the monsters and thus his main weapon is his big, creepy arm. That's attached, though, and not really an accessory. His only actual accessory is a combat knife. It looks great and is fairly detailed although Krauser has a hard time holding it. That's more a fault of his hand, though, than of the knife itself. It does fit securely in the sheathe on his belt. 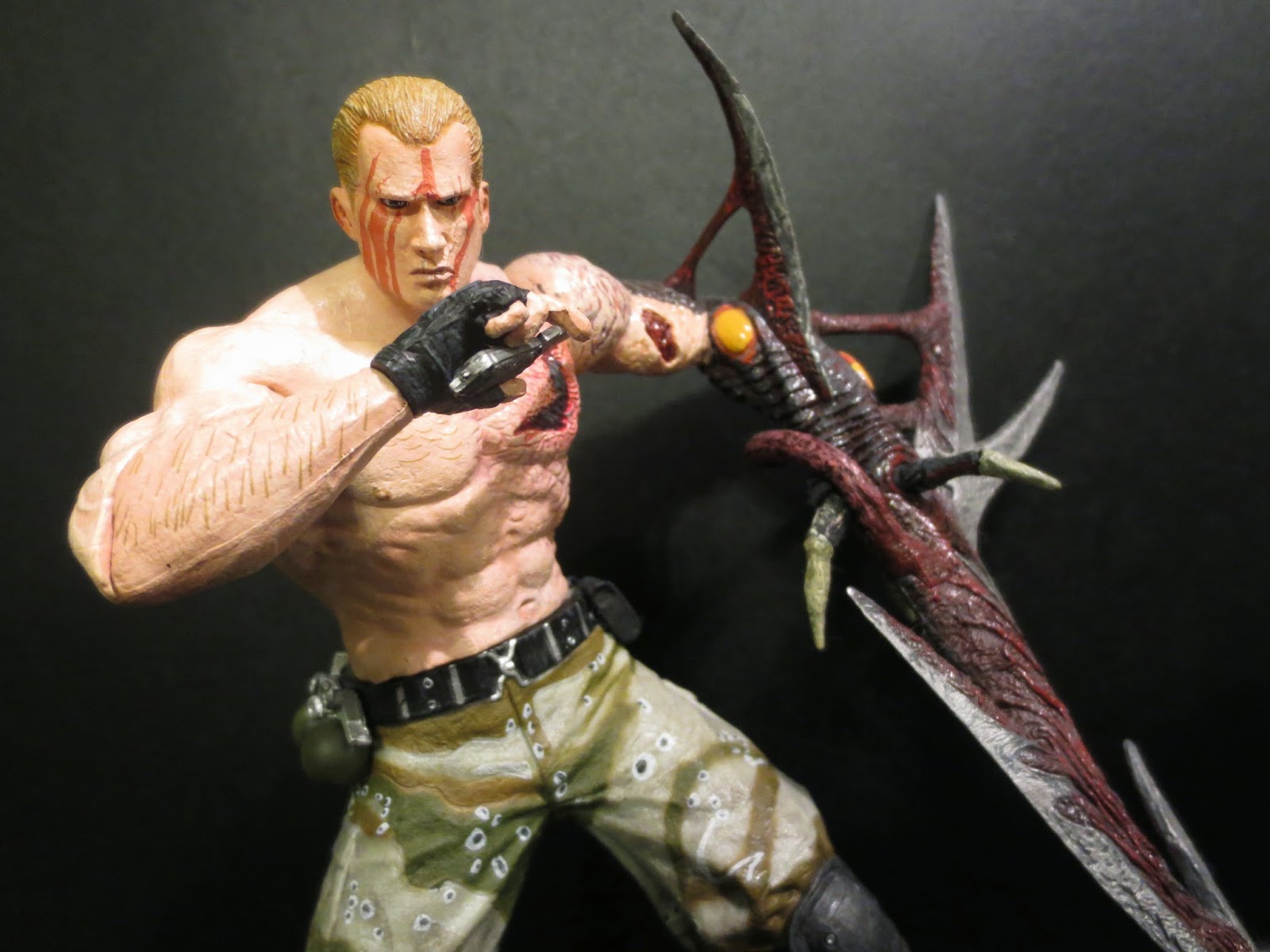 I've always liked NECA's Resident Evil figures and Krauser is another hit. Yes, I wish some company would make a ton of characters in the same scale, but NECA did a good job for the figures they produced (why they seemingly just gave up on the license is another story). As it is, Krauser looks great and is a cool figure to have on your shelf. You can't really do much with him, but that was par for the course at the time he was released. Thinking back to when I first bought him, Krauser was impressive, but underwhelming because of his articulation and his difficulty in standing up right. Overall, I think this guy is getting a Good and a 1/2. I don't know how many fans old Jack Krauser has, but if they're out there and haven't picked him up yet, they could do far worse. He's a crazy guy who brings a giant mutated arm to a knife fight, and I can respect that.
Posted by Barbecue17 at 12/03/2014