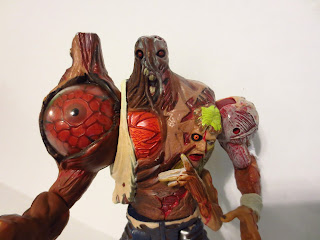 So, you thought ""Video Game Superstars Presents: Capcom's Resident Evil 2" was too long of a name? How about "Video Game Superstars Presents: Capcom's Resident Evil 2 Platinum?"  In 1999 Toy Biz released a third series of Resident Evil figures that tied in to the success of Resident Evil 2.  The series included four new packs: Hunk and a regular Zombie, Ada and Ivy, Mr. X, and the set I'm looking at today, William Birkin and Sherry.  William Birkin is Sherry's father, and this set represents him in his mutated form, sometimes referred to as his G-2 form.  Sherry Birkin is William's daughter, and she's being pursued through Racoon City by the mutated William because she has a sample of the G-Virus hidden in the locket her father gave her.  Sherry is briefly a playable character in the game if you're playing through as Clarie Redfield.  While she apears when the plot of Resident Evil 2 is retold in Resident Evil: The Darkside Chronicles and is in Operation Racoon City, her big return is as a government agent and main playable character in Resident Evil 6.  While this set is Sherry's only appearance in action figure form, William has appeared in his G-2 form as both a figure from Moby Dick toys and as a statue from Palisades.  Proving the strength of the bond between a father and daughter, this set might be one of the best Toy Biz ever released. Check for more details after the break.... 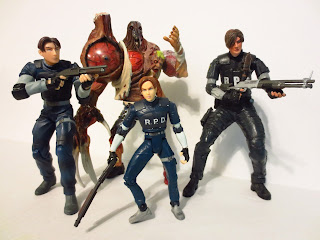 The Toy Biz Resident Evil figures are more animated looking than most of the figures from other companies. They also have somewhat of an anime vibe to them, although this isn't too noticeable on Sherry.  The basic human figures are around 5 inches in this line, with Sherry being about 3 1/2 inches (she's just a kid, after all) and William standing about 7 3/4 inches tall.  These figures might fit in with McFarlane's Walking Dead figures size-wise, although I wouldn't hesitate to throw William in alongside my NECA and Palisades Resident Evil figures. He's a little different in scale and style, but not enough to notice during a casual glance. 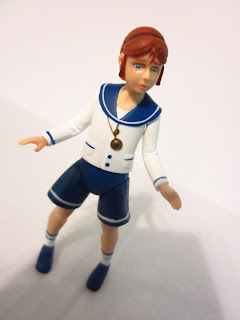 In looking at articulation, I'll start with Sherry,who has v-swiveled hips, a swivel waist, swivel shoulders, and a swivel neck. Because of her awkward legs (covered below), Sherry doesn't have much room for posing below the waist, but her slightly pre-posed arms do look good in a number of poses, even though she only has swivel joints.  William has swivel hips, a swivel waist, a swivel shoulder on his smaller left arm, a ball joint shoulder and a hinged elbow on his larger left arm, a swivel right shoulder, a positionable eyeball on his right shoulder, and a swivel right elbow.  Once again, the idea here is to just show that this guy was definitely built more for play than posing, but a variety of joints do give him some movement, keeping him far from static.  He stands well on his own. 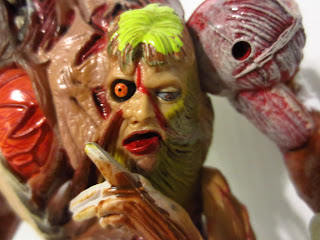 I'll start with the bad and move to the good. First, Sherry. She's just not the best sculpt.  There's some decent detail work, such as the locket hanging off of her neck and the buttons on her jacket, but there's also some weird decisions. In the game Sherry is wearing a school outfit with a skirt, but here Toy Biz tried to sculpt both legs separately, and thus she looks like wearing some really awkward and baggy shorts.  It's actually hideous. Her legs are also twisted so awkwardly that she kind of looks like a zombie. Weird, huh? Now the face, I'm mixed on. From one angle it looks like a really good sculpt of a scared little kid (and Sherry has every right to be scared), but from another she kind of looks like Russel Crowe.  Anyways, let's move on to William, who is an example of one of the best figures in the line.  There's so much detail on this figure that you'll really just have to absorb it all in.  He's ....vaguely humanoid? He has a head and a face, but they're not in the same place.  His body has grown, leaving his skin stretched and tearing.  The left leg looks completely stripped of flesh, and you can see all of William's muscles and veins. Icky! The right leg is a little better off, as William's still got a boot on, although his toe claws are popping out.  He's also wearing cutoffs: maybe he's a never-nude?  The torso is nothing short of magnificent; let's just start with the fact that because his skin is stretched and contorted, his face is pretty much on his left breast.  It's a hideous face with one eye bulging open and a smaller arm on his left side popping up in front of it, almost as if it's making a "shushing" motion. 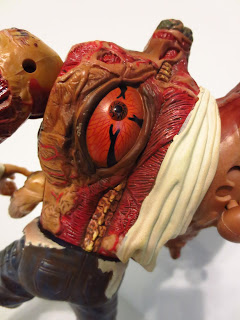 The left arm is grotesque, as expected, but also has the beginnings of the various spikes and claws that appear on the G-4 version of the character. One of the neatest features of the figure is the way that his shirt has been ripped and shredded by the G-virus' accelerated growth. On the left arm, there's an actual piece of cloth attached to the figure. It's such a small detail, but a very cool one.  William either has a giant creepy eye growing on his rear torso, or one of the worst cases of bacne I've ever seen. It's just hideous, and the exposed spine underneath isn't much better. But it's hideous in a good way. Last, but not least, let's talk about the massive right arm.  The thing has more unique sculpting on it than last year's entire Club Infinite Earths line combined (I kid, I kid. Kind of).  It's a massively over sized arm with massive claws and a gigantic eyeball growing on the shoulder.  This figure is truly a thing of nightmares. What's even better is that the eyeball is kind of squishy and veiny, and can be moved via a knob on the back of the arm. Yes, the giant eyeball on this toy can watch you.  If you want to screw your kid up for life, this is the toy to buy them.  I love it! 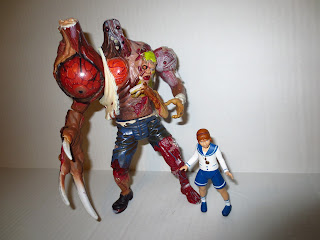 Great paint work perfectly complements William.  The reds used on places like the open wound on his stomach or on his raw left leg actually look wet, like raw meat.  Pieces of bone, cartilage, and decaying flesh are stomach churning shades of brown.  The claws are ivory, but are covered with various shades of paint to represent stains.  All of the eyes are a shocking orange with extremely detailed red blood vessels.  There's so much good paint work on this figure that I really could go on and on. While not as intricate (or as gross) as William's, Sherry's paint work is also solid, with very clean lines for the most part. Some of the details on her school outfit are a little rough (white lines on blue can be tough), but the little details on the face and shirt are done well. 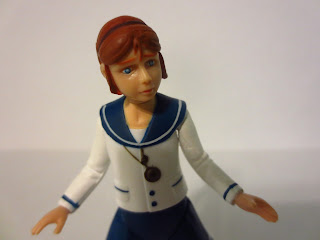 The set doesn't come with any accessories, but you could make a strong argument that Sherry is the accessory for the larger William figure. It's a stupid argument, but you could make it. In actuality, this pack gives us two prominent characters from Resident Evil 2, one of which is quite massive. Accessories are always nice, but I can't say that they're heavily missed here. 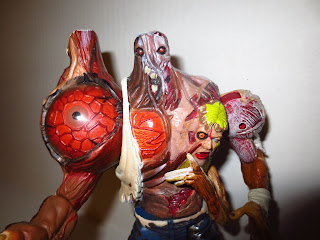 I love this set. While Sherry isn't the best figure in this line by a long shot, her inclusion is important as she is one of the playable characters in and a key part of Resident Evil 2's plot. William, however, is just magnificent. While released in 1999, this guy's level of detail and paint application still impresses me today. The articulation is a bit dated, but this is still a cool monster.  This was not a set I owned originally, and actually got my first William through an E-bay lot about 5 or 6 years back. Having just got a whole set of these figures from a friend on another site, I'm excited to add Sherry to the collection now. Because of the strength of William alone, I have no compunction about confirming this figure Great and a 1/2.  Toy Biz was pulling off some really cool stuff, and in a perfect world they would have released a few more waves, possibly featuring more Resident Evil characters, as well as covering Nemesis and Code Veronica.
Posted by Barbecue17 at 12/03/2014