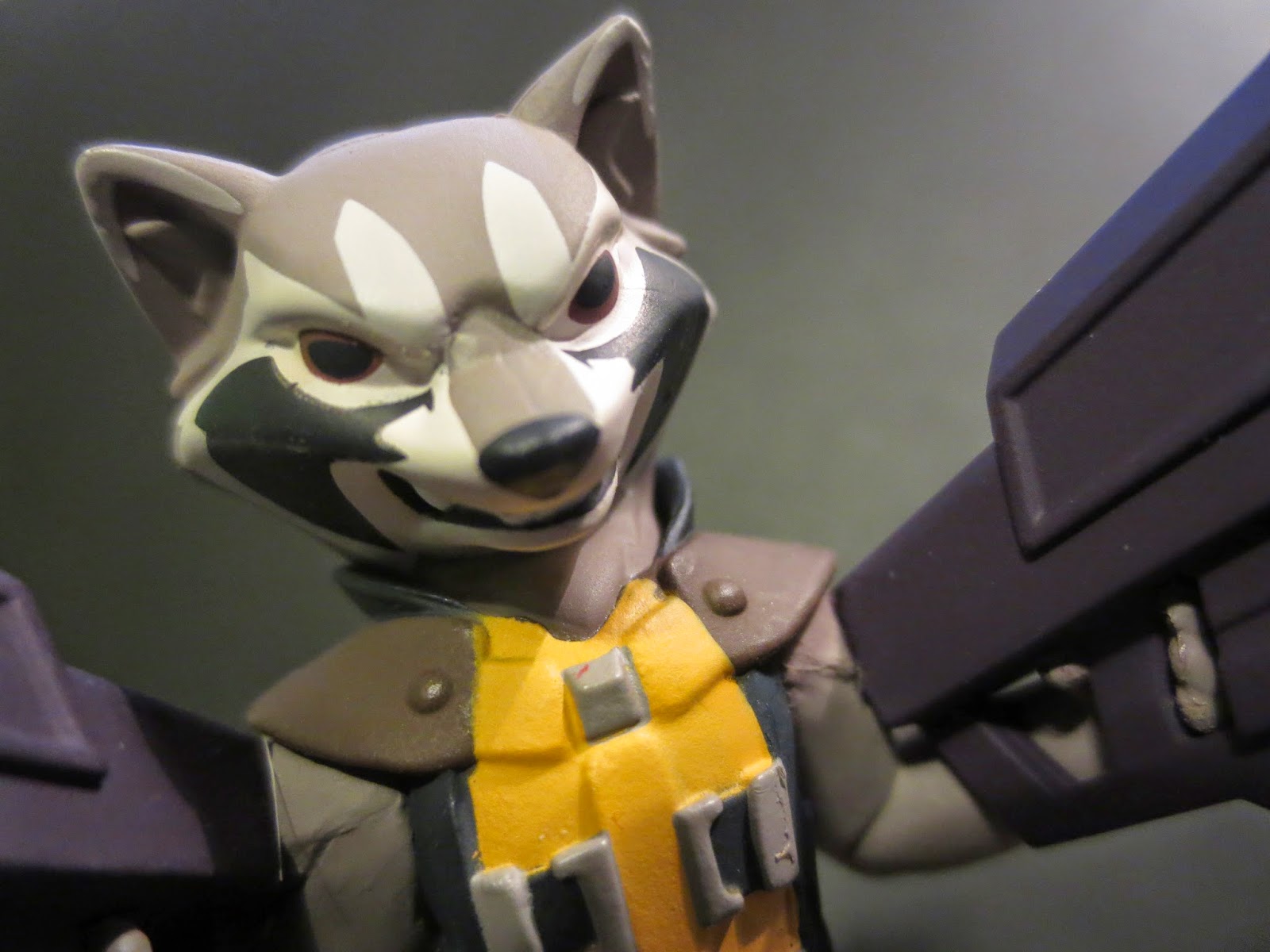 I've already looked at Hulk from the Disney Infinity: Marvel Super Heroes series so now I'm taking a look at another additional character I've purchased: Rocket Raccoon. Guardians of the Galaxy is without a doubt my favorite film of the year so far and getting the Guardians in the sleek, animated Pixar style of Disney Infinity was a major selling point for me. In my review of the Hulk I mentioned that I actually like these figures much more than I like the video game that utilizes them. Like Skylanders or Nintendo's Amiibo, Disney Infinity uses these plastic minifigures to allow you to bring new characters and game environments into your video game. In all honesty, I suspect nearly all of that content is already included on the disc and the figures simply "unlock" it. Still, it's a cool idea, particularly if you like the figures. I do, so here's my take on Rocket Raccoon.... 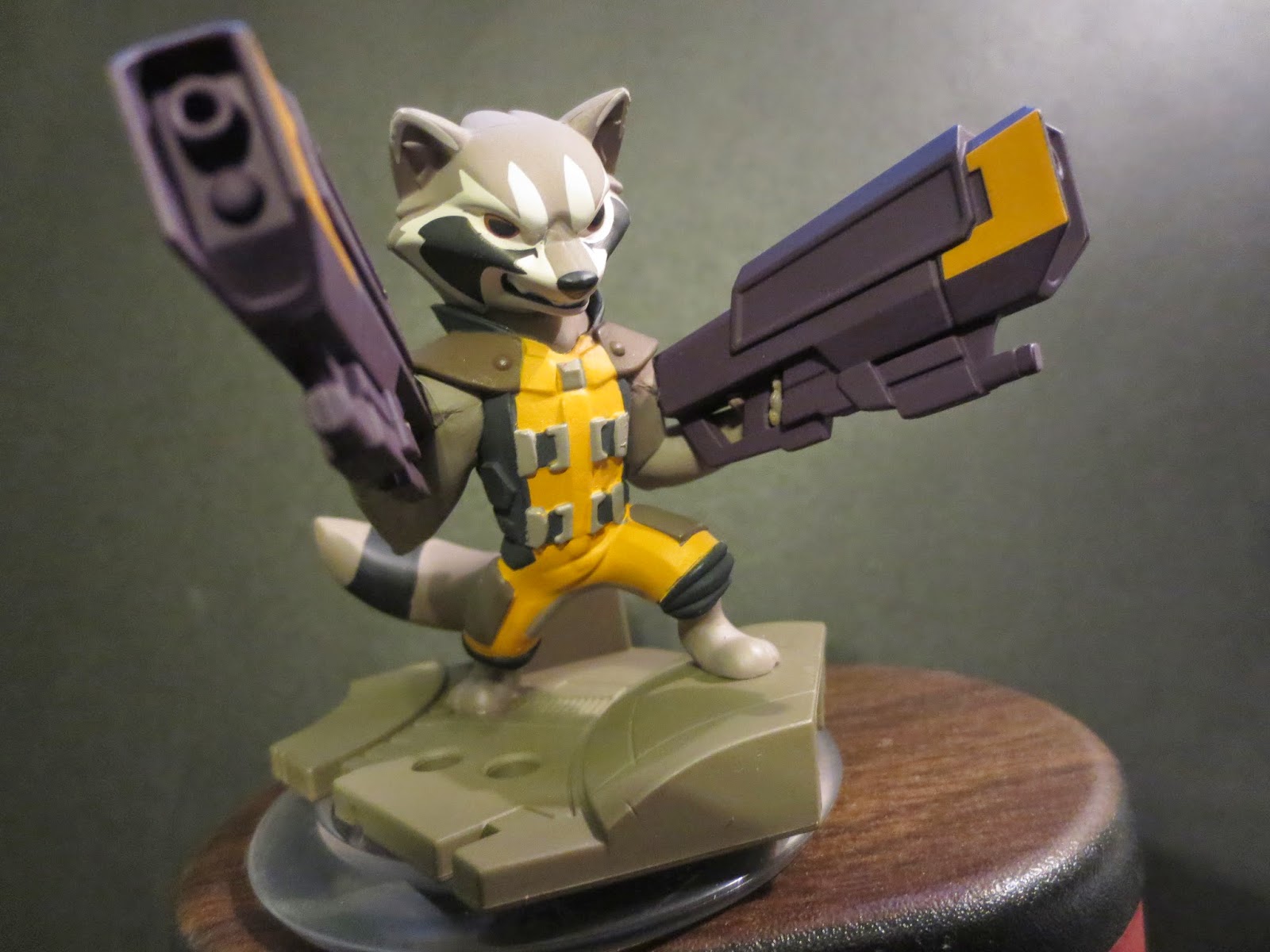 Height: 2 3/4 inches tall (from base to ears)
Articulation: None
Accessories: 1 Card with downloadable code

*I just love seeing all of these Marvel characters (particularly the Guardians) in a consistent animated style. They really look like characters from an amazingly awesome Saturday morning cartoon. Rocket looks amazing in this animated style. Baring his teeth and carrying two huge weapons makes him look absolutely incredible. I actually kind of like him more than the Marvel Legends movie based Rocket Raccoon. His pose is really fun and expressive of Rocket ready for battle. 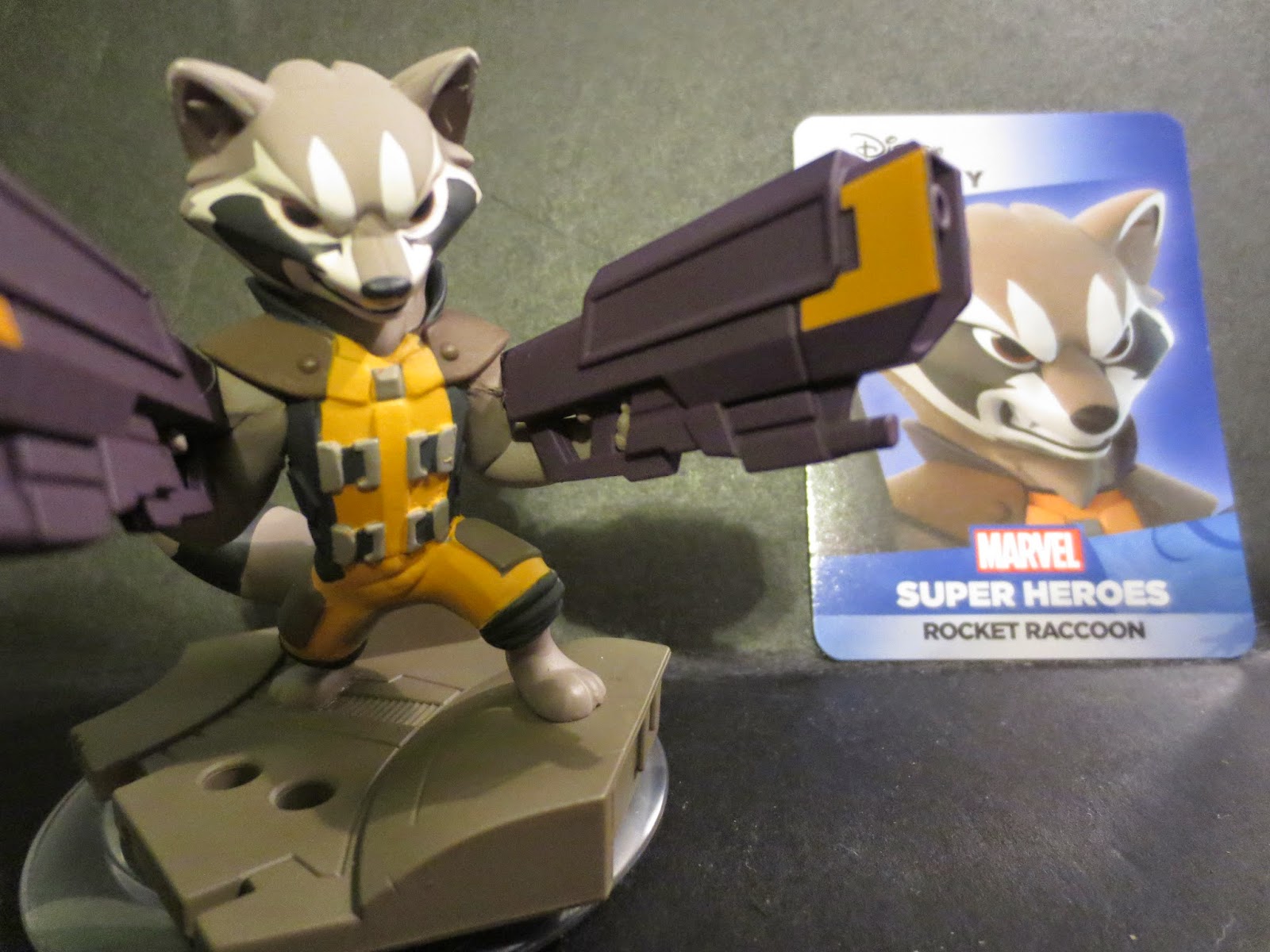 *The paint work is really nice. While these guys have a simple, clean style to them, the mixture of colors on Rocket's face and tail really help him to stand out. His uniform also really pops as well thanks to the mixture of orange, black, gray, and brown.

*While the base is necessary for the video game to function (the figure unlocks the character in Disney Infinity 2.0 and serves as a memory card for leveling up Rocket), it also looks really neat. I'm a sucker for any figure with a base, even if they're non articulated. 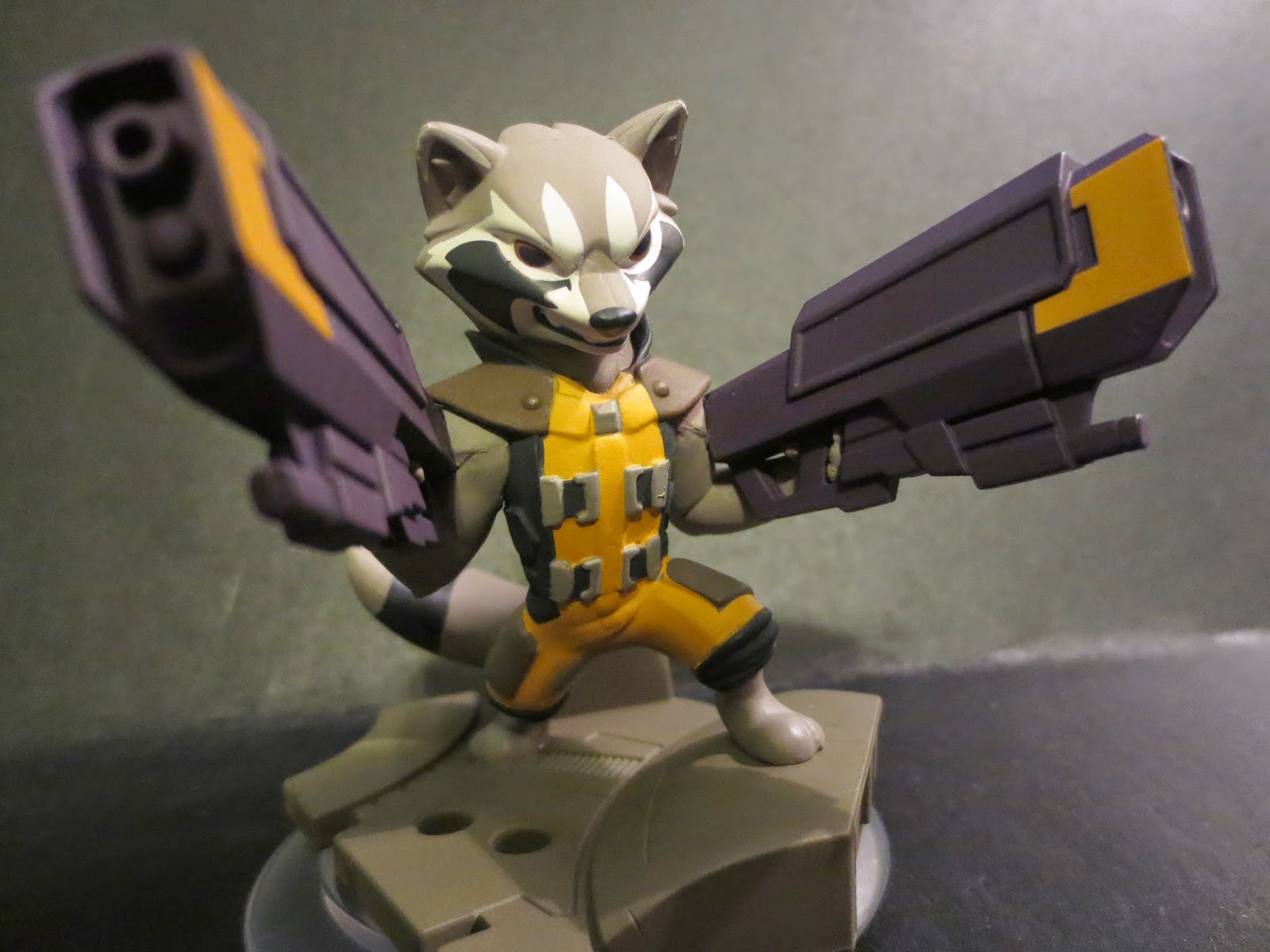 *I'd love is Disney Interactive tried to work out at least one or two points of articulation on each figure. Perhaps this would interfere with some sort of licensing agreement they have with Hasbro, but these are such cool figures that it's a shame there isn't a little bit of extra play-ability.

*While I love the figures, I'm not completely sold on Disney Infinity 2.0 itself. It's quite fun to run around as the Marvel characters, but the missions and environments in the games (I have the Avengers and Guardians sets) are just a bit bland. I'm really buying these more for the figure than the game, so the extra price tag (around $13 to $14 hurts). 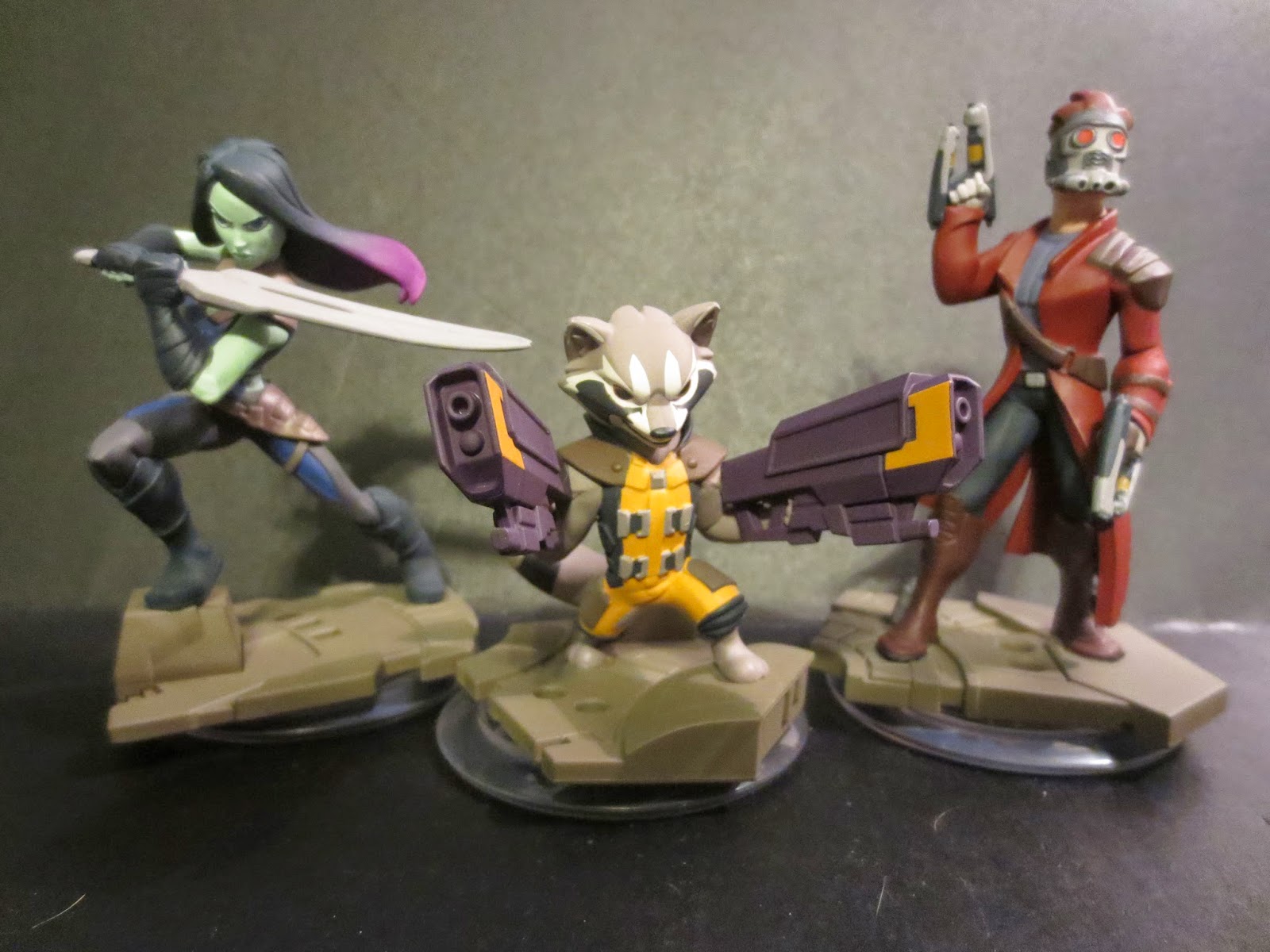 As a Guardians and Marvel Cinematic Universe fan, I really, really want to complete this collection of figures. I'll still pop them on my Disney Infinity 2.0 portal a bit, but I'm really here for the toys. Just consider them many statues and you might be happier. Not factoring in the price and looking at these solely as non-articulated minifigures, I'm content with giving Rocket a Great rating. He looks great, especially standing alongside my other Disney Infinity: Marvel Super Heroes figures, even if the video game aspect doesn't thrill me as much as I hoped it would.

Check out my Hulk review to see another figure from this series.