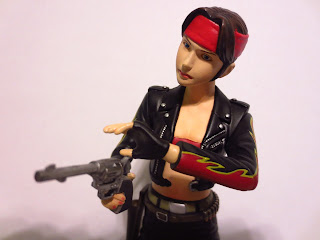 I don't know much about Moby Dick Toys, so if you do please let me know!  (I like to pretend they're run by some crazy old businessman with a peg leg and an eye patch, though.) Around 2000, the Japanese company Moby Dick released action figures that were tied in with the video game Resident Evil 3: Nemesis (of course, since these were created in Japan, they used the Japanese name for the Resident Evil series, Biohazard) that have since become fairly rare.  Most of them, anyways. If you look around you can find a few of the figures (like the Regina version of Jill Valentine) for decent prices, but most of them are fairly pricey, and some, like any version of the Nemesis and Rebecca Chambers, usually sell for a little over $300. Today I'm looking at one of the low-to-mid range figures, Claire Redfield in her leather jacket alternate outfit from Resident Evil 2.  Released in 2002, Claire was packaged individually and, like most other figures in the series, came with a piece of a giant build-a-Nemesis figure. I have the part somewhere, but it's not too interesting on it's own. I'd much rather look at Claire, wouldn't you?  I'll do just that after the break... 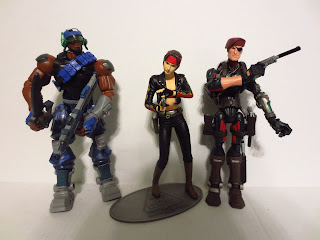 Claire stands about 7 3/4" tall.  That's actually a pretty unusual size for an action figure and I haven't found many other lines that she fits in well with.  For quite some time I displayed her and the Regina version of Jill Valentine with my G.I. Joe: Sigma 6 figures.  They fit in well there both scale-wise and stylistically. 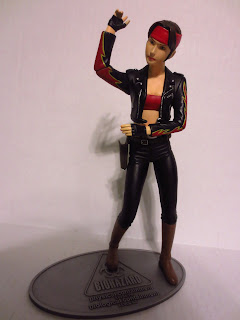 I get the idea that these were intended to be more like statues that gave you some variety in posing rather than full fledged action figures, due to their somewhat posed nature.  Claire features boot swivels, a swivel waist, swivel shoulders, swivel elbows, swivel wrists, and a ball jointed head.  She won't stand on her own, so the included stand is necessary.  Her boot swivels are really only useful to get her feet lined up evenly--they don't add much to the different poses. The upper body articulation is decent, though, and allows her to hold both her revolver and her machine pistol in a few different poses. 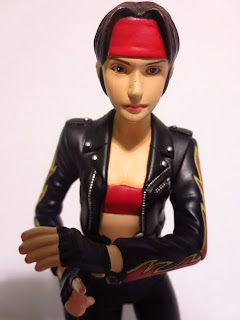 Like the anime styled images of the characters that appeared on various pieces of promotional art and in the included instruction manuals with the games, the style is fairly simple.  This isn't my favorite Claire headsculpt ever, but it's certainly not bad and looks a lot like her appearance in Resident Evil 2. She's got a cute, heart-shaped face, but a cool, steely gaze to counterbalance it.  Her hair is tied back with a bandanna.  The outfit is perhaps a bit unpractical for zombie hunting- a barely there t-shirt that exposes her bell button and a too-short leather jacket.  The jacket has some nice sculpting on it, though, with buttons and zippers and such.  At least her leather pants offer a bit more protection, along with those tall leather boots.  She's got a belt for her revolver that isn't removable but does float above her hips.  There are lots of additional bullets on the belt and a working holster. 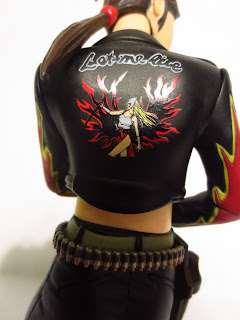 The paint work is very neat and clean.  Most colors are applied simply, without techniques like washes or dry brushing.  The leather pieces of her outfit are a flat black, but the jacket has a good amount of detail.  Each of the buttons and zippers is touched with silver paint and the sleeves have a cool flame pattern to them.  On the back of the jacket is a picture of a Valkyrie with the words "Let me Ride."  The face looks good, especially the eyes. The bullets in the holster are also given a few touches to help them stand out. 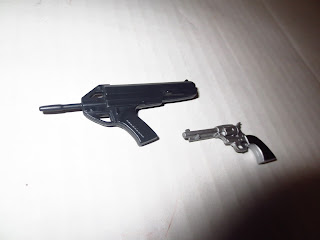 Claire comes with two weapons and a stand. The stand is really nice. It's necessary to keep Claire standing and features a nice ovular base with a raised Biohazard logo and the words "physical containment/Level P4/ biological containment/ Level B2".  Claire's first weapon is her Colt S.A.A. revolver, which in-game is a more rapid fire version of her standard handgun.  It can fit in her right hand and her left hand can be posed in such a way that it looks like she's fanning the revolver.  The second weapon is not actually from Resident Evil 2, nor Resident Evil 3, but from Resident Evil: Code Veronica: it's one of the M-100 pistols Claire uses in the game.  Claire looks pretty awesome with it, even if she never used that gun while in this uniform. 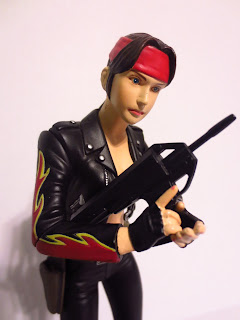 I really like most of Moby Dick's offerings and would love to someday complete my set, especially picking up figures like Rebecca Chambers, Jill in her Resident Evil 3 outfit, and the Nemesis.  Unfortunately, those figures are getting really, really expensive, so who knows if I'll ever do that.  This figure, though, I really like. I'd easily give her a Great. I like figures that are very statuesque, and this is a great example of that. The detail's good, the paint's good, and this is the only version of Claire in this outfit. I'd recommend tracking one down if you're looking for a unusual Resident Evil piece for your collection.