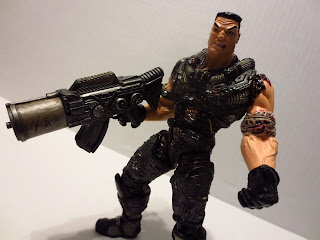 Someday, collectors will have to debate the merits of the various action figure time periods.  In my opinion, one of the greatest times to be a collector of action figures was during the late 90's through the early 2000s. It was during that period shortly after the birth of McFarlane Toys and the relaunch of Kenner's Star Wars line that every company was trying to one-up everyone else.  Whether it was better paint and sculpt, more unique accessories, cooler packaging, or more obscure licenses, the years from 1997 to around 2002 or 2003 were truly a period when the action figure industry seemed to be at the top of its game in order to offer the highest quality product to consumers.  While companies like Hasbro, McFarlane, Mattel, and others were all present, this was truly a period that belonged to smaller companies like Mezco, Sideshow, Palisades, Plan B, and the company whose product we're looking at today, Resaurus.  The first Resaurus figure I ever remember owning was their version of Duke Nukem, a figure that still stands proudly on my shelf.  Part of Resaurus' claim to fame was the excellent work they did on video game licenses (they were certainly one of the first companies to seriously tackle video game licenses) and one of the lines that sadly only lasted for one series was Quake 2.  Today I'm looking at the Marine from Quake 2, released in 1999. Join me after the loading screen..... 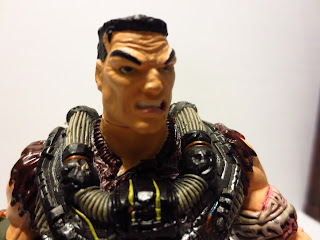 While the trend these days seems for action figures to be getting smaller (so many lines have shrunk down into the 1/18th scale), during the mid 90s the trend was to continually make action figures larger.  The Marine is a tall (almost 6 3/4 inches), bulky figure that wouldn't feel out of place alongside NECA's Gears of War figures.  Since he was based off of a video game, and an older game at that, the style is quite "animated" and there was a lot of translation that had to be done transitioning the figure from the game to a 3-D plastic representation. 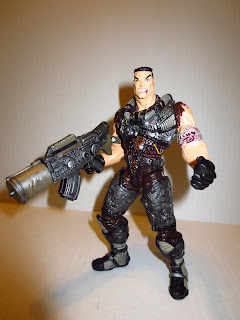 The biggest indicator that tells us this figure was released in the pre-Marvel Legends era is the articulation that consists entirely of cut joints.  The Marine features hinged knees, swivel hips, a swivel waist, swivel shoulders, bicep swivels, wrist swivels, and a swivel neck.  While the prevalence of all swivel joints and no ball joints would seem poor by today's standards, back in the late 90's this wasn't as big of a deal, and I imagine most collectors would be pretty happy with the Marine's articulation.  While he has the bicep swivels, his elbows are sculpted in "bent" positions, meaning that the swivels do change the pose quite drastically.  With his swivel wrists, he can hold the included weapons a few different ways, always a nice feature. 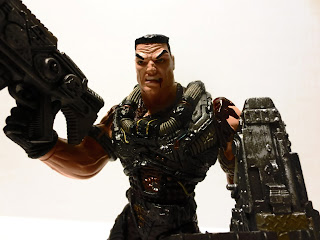 Despite being an older figure, the sculpt is still really, really detailed and would have been even more impressive at the time of its release.  Decked out in a body suit and covered with various pieces of armor, the Marine is covered with a wealth of details.  From the treads on the bottom of his boots to the textured grip on the palms of his gloves, Resaurus didn't leave any of this figure barren.  The armored bits certainly tell a story, as numerous bullet holes, scuffs, and slices can be seen in the armor.  Even the Marine has taken some damage, as his sleeves are completely ripped off and his left arm has been hastily bandaged.  The armor seems to be pretty functional and made for combat, as the gloves have armored plating on the outside, the thigh pieces look to have some type of piston system, perhaps to aid in movement, and the back of the figure features an elaborate electronics system (perhaps this is a shield unit of some kind?) and what appears to be an oxygen tank.  While he's armed with a wealth of weapons (keep reading) the Marine does have a bandolier of three grenades strapped to his right arm.  The head sculpt is probably the most dated piece of the sculpt. It's certainly not bad, but it definitely has the extreme style of something from the 90's.  The Marine's steely grimace is pretty effective, though. 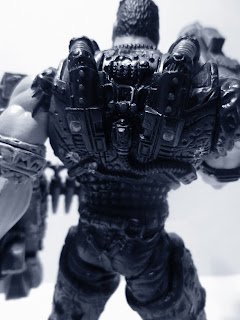 The paintwork, however, is completely beyond reproach.  Every detail is neat and crisp with clean lines and multiple weathering techniques.  Even little wires on the armor are painted different colors.  Look at the bullet holes in the armor--I'm not sure if that's supposed to be the remnants of the bullet inside the hole or the damaged armor underneath, but it still is a cool, effective paint app.  It really is an amazing figure and while the skin is one flat tone, the rest of the figure utilizes a whole pallet to bring this war-torn warrior to life. 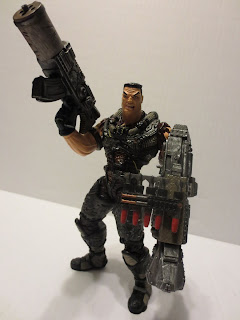 In a figure with lots of strong points, the accessories still stand out. I remember an article from ToyFare magazine sometime during the summer of 1999 where ToyFare got a group of toy industry folks together to review the Star Wars: Episode 1 action figures.  When it came time to review the Anakin Skywalker figure, the guy from Resaurus commented something like, "Resaurus makes accessories larger than this figure." That dude was correct. Opening this figure, I was just amazed at the size and weight of this figure's accessories.  Each piece probably has more unique paint applications on it than the average action figure you could buy at a mass market retailer these days.  The marine comes with a rocket launcher with a separate rocket rack, a large machine gun, and a cybernetically enhanced shark.  The rocket launcher is easily as long as a modern G.I.Joe figure is tall, and the whole thing is solid and bulky.  It features a really nice paint job that makes it look metallic with several different paint apps, including some excellent dry brushing techniques.  The sculpt is also excellent, with everything from individual wires, various knobs and panels, and even steel plating.  The barrel is hollow and gives the impression that a rocket could really fire from this thing.  The rocket rack is a separate piece that plugs into the top of the launcher and holds five red-tipped rockets (they're not removable).  The machine gun (I think it's called a hyper blaster) features the same great paint scheme and sculpting as the rocket launcher.  The four barrels are all hollow, and are covered with dents and weathering. 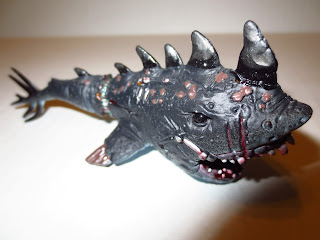 Last, but certainly not least, is the cybernetic shark. A result of the Strogg taking animals and manipulating them, the shark looks like your average small shark, but he's covered with additional spiked fins, barbs on his tail, and a metal endoskeleton that is often popping through his flesh.  While he is made of a bendable material (only his tail can be posed, though) the sculpt is sharp and detailed.  Small details like wounds, gills, and the rows of sharp teeth are all very crisp.  The paint job is also excellent. Just look at the picture! This guy has as impressive of a sculpt and paint job as many figures released today.  Resaurus definitely delivered on the accessories here.

This was very much an impulse buy at a comic store in Asheville, NC (Pastimes), and I paid less than $4 dollars for it. Knowing what I know now, had this figure been on a shelf for $15, I still would have picked it up.  While in so many ways action figures have gotten more impressive in the 14 years since this figure was released, there have been ways in which they've gone backwards, too.  In trying to judge this figure today, I'd still give it a great. Despite the reduced articulation, everything else about it is incredibly impressive and designed to be both fun and a nice display piece.  Since we're in the Action Figure Time Machine, though, my final judgment is basing this off of other figures from 1999. If so, this figure would easily be Confirmed: Epic. If you're interested in older action figures or video game pieces, snag this guy online or at a toy show for a few bucks. He's definitely worth it. And he comes with a cybernetically enhanced shark. Word. 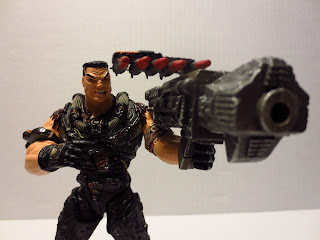 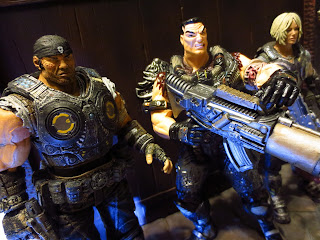