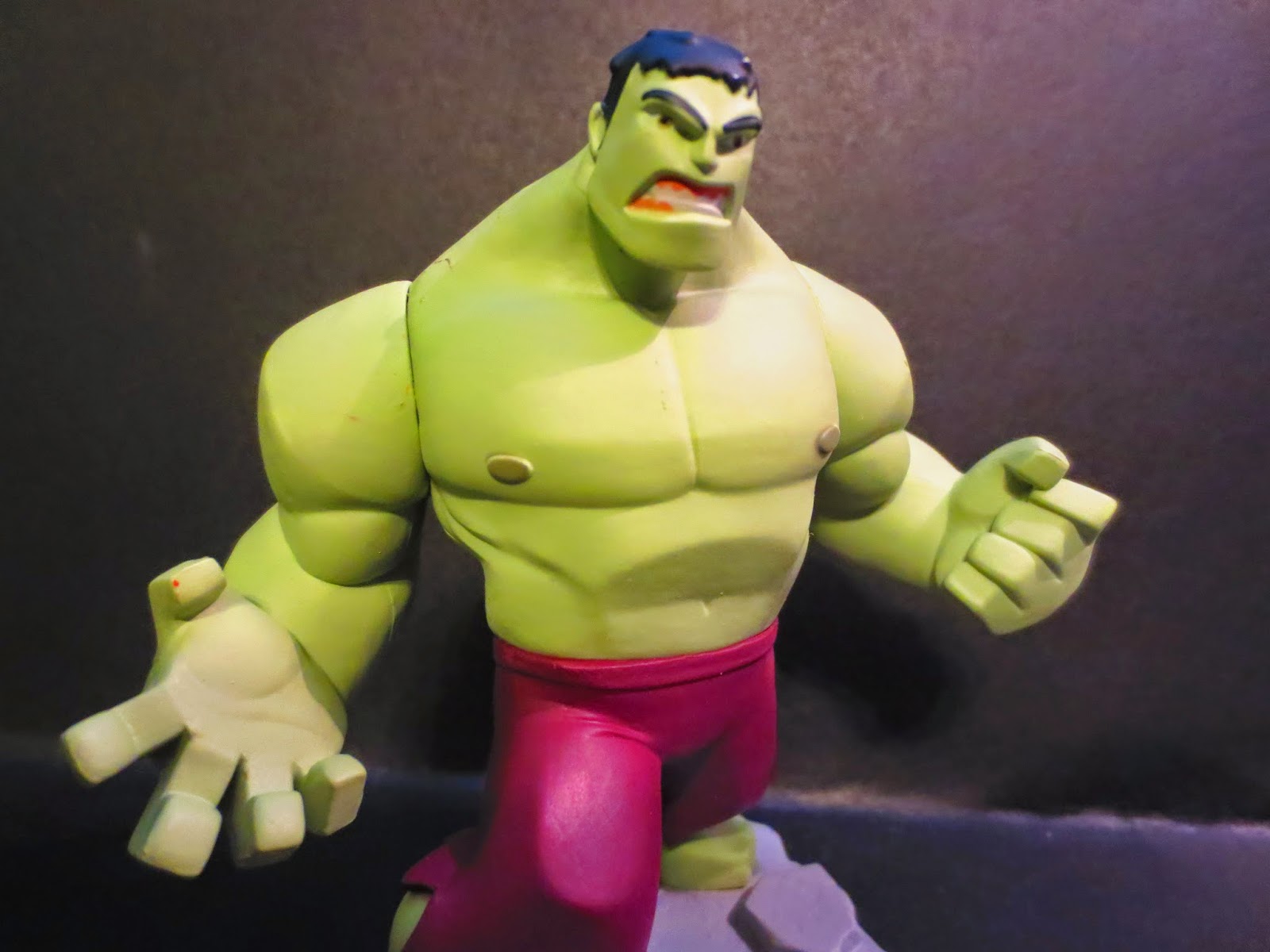 While I'm definitely more of a DC fan than a Marvel Fan (due to Batgirl, the Batman universe, Vertigo, and Kirby's Fourth World stuff), Marvel has really won me over due to their excellent cinematic universe. Other than Nolan's Batman films, nothing rivals Marvel's films for pure superhero awesomeness. Today I'm looking at one of the most recognizable superheroes out there: The Incredible Hulk! This really isn't an action figure, though; it's actually a swappable game piece for the Disney Infinity 2.0 video game. Like Skylanders or Nintendo's new Amiibo project, Disney Infinity is a video game that uses sculpted minifigures and a special reader hooked up to the video game console to "transport" characters into the game. The figure serves to activate the character and store its stats so that it can be played on other systems (despite the console being used). Honestly, while I've thought it to be a clever concept the games have never appealed to me until now. I just bought my Disney Infinity 2.0 set a few weeks ago and, while the game looked fun, two main things sold me on these. First was the awesome sculpts of the figures. Second is the fact that Star Wars and Indiana Jones are rumored to be getting in on the Disney Infinity action next year. Anyways, here's a look at the Hulk after the break.... 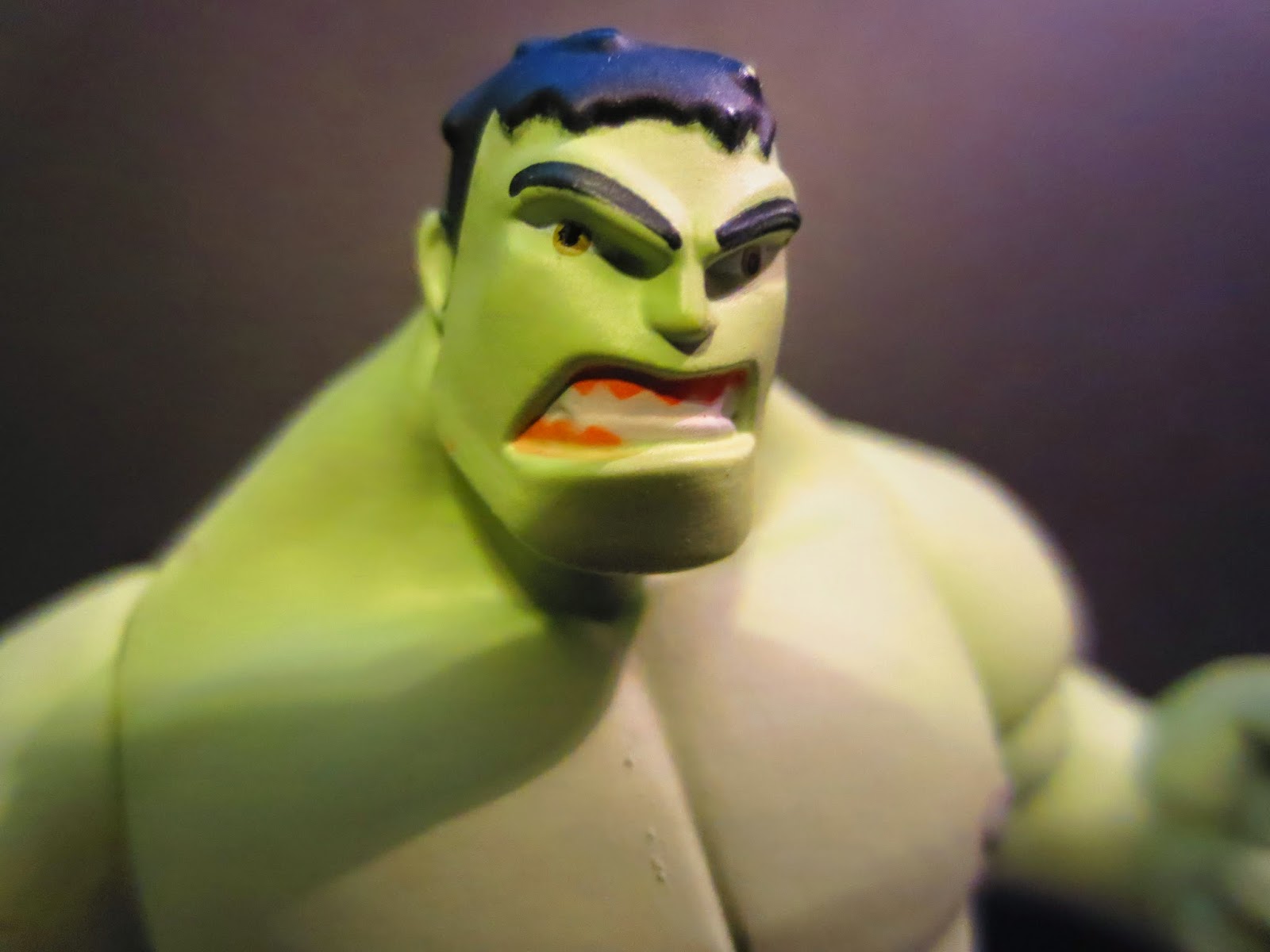 I really like the sculpting on these. The design aesthetic was to imagine that each character is truly a toy in the game. The look is very smooth and slick with bright, solid colors. I'd love to see a cartoon series using these designs! I love the look on Hulk's face here. 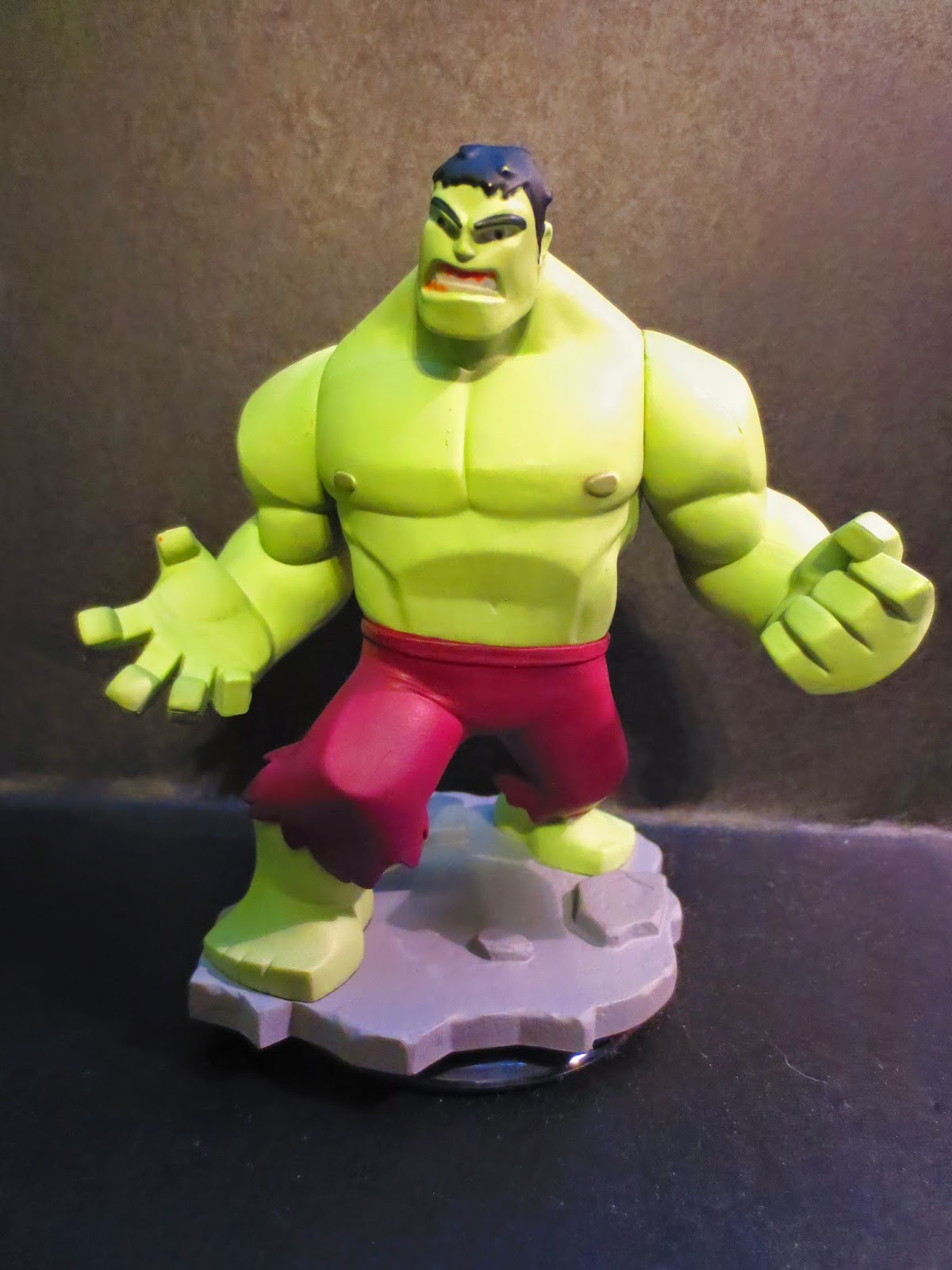 Hulk is a good bit larger than most of his fellow Marvel Superheroes figures. From the bottom of his base to the top of his head Hulk stands about 4 1/4 inches tall. This is a non-articulated figure even though the arms look like they have swivel joints. They don't. It is simply part of the design aesthetic (they look like this in the game, too). 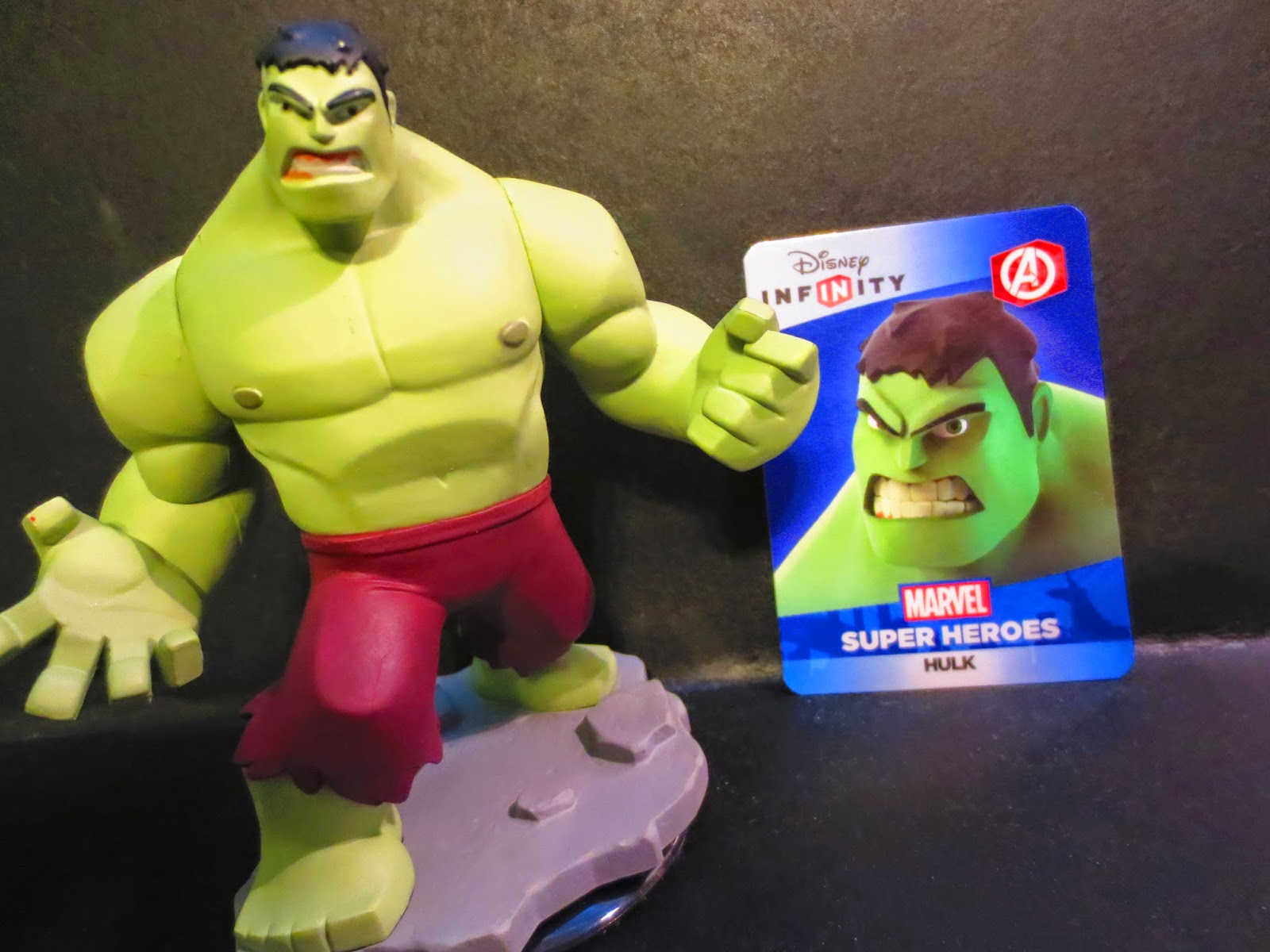 The only accessory Hulk comes with is a card that features a redemption code so you can unlock a digital Hulk figure on the Disney Inifinity app (that's different from the main game). That sort of thing doesn't appeal to me much, but I'm sure there are some gamers who dig it. I do like playing as Hulk in Disney Infinity 2.0, though. He's a bruiser that has some fun abilities such as being able to climb walls and being able to pick up large objects. 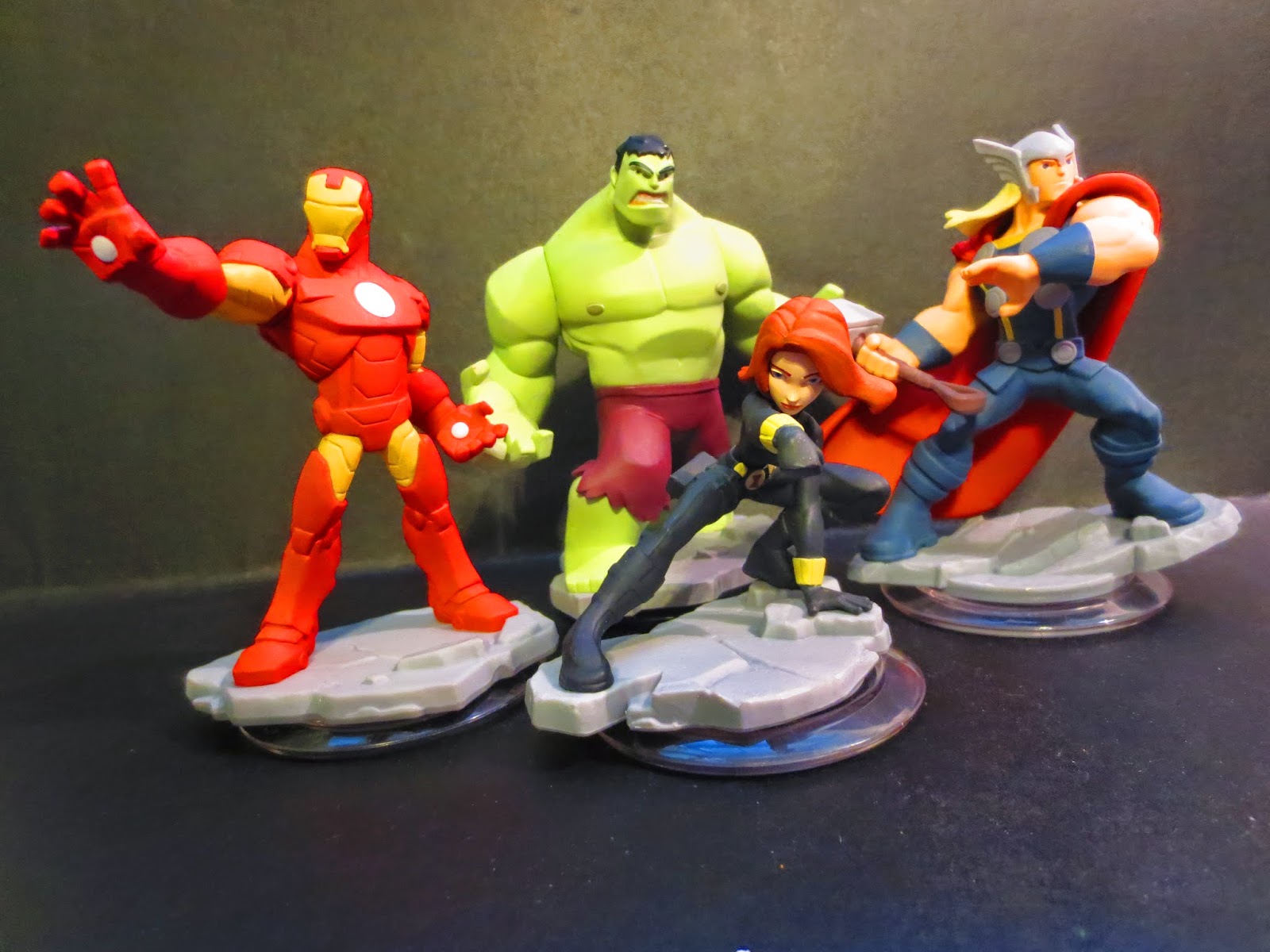 Honestly, while the game is fun to play, the main reason I grabbed these is simply because I just really like the look of the figures. I'm definitely watching for sales, though, as each figure runs around $13 dollars. How great of a value you consider these to be really depends on if you play the game or not. Still, judging this just as a painted minifigure by itself, it's very nicely done. The sculpt, paint, pose, and inclusion of a base definitely warrant me giving Hulk a Great and a 1/2. These guys just look really nice as a team, don't they?
Posted by Barbecue17 at 12/06/2014