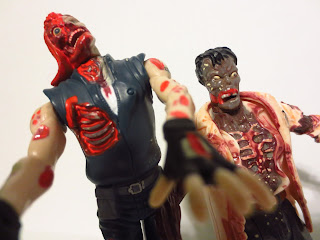 This is it, folks. The first Resident Evil figure I ever owned.  In my review of The Real Ghostbusters Zombie I talked about my history with zombies, but ended before I got talking about Resident Evil.  That's what I'll be doing here, as well as reviewing this confirmed Epic action figure set.  I stayed with my grandmother during most of the summer of 1998. Days were spent watching movies, playing Nintendo 64, and spending time with various cousins, all of whom lived near my grandmother.  During an evening spent with one of my cousins, a friend of his brought over a Playstation. I'd never really had the chance to play one before, so this was a pretty big deal.  As I was flipping through his games (mostly sports and wrestling) I did find one game that appealed to me: Resident Evil.  I was not unaware of the game, as I probably had a subscription to the majority of the gaming magazines of the day, but I just hadn't had the chance to play it yet.  I asked could I give it a try.  Tyson (yes, that was his real name as far as I can remember) let me boot the game up and suddenly I was in pure gaming nirvana.
It began like a horror movie, featured a creepy old mansion, plodding zombies, rabid zombie dogs, and a constantly oppressive atmosphere.  While I soaked up every ounce of my all too brief session with this game, Tyson just sat there and told me that if I didn't run everywhere I'd never beat the game in under three hours and unlock the rocket launcher (I seriously doubt anyone does this on their first play through, anyways).  Up until that point, perhaps the only video game to truly immerse me like Resident Evil did was Goldeneye, and I distinctly remember sitting around at my grandma's house the next day drawing maps of what I could remember of Spencer Mansion from the game.  Just a week or so later I was on a trip to Target with some family members when I found Toy Biz's Resident Evil figures freshly stocked.  I'd seen them previewed in the late, great ToyFare magazine, but now I realized the appeal. I didn't have much money (my parents had given me money at the beginning of the summer which I had to ration) and since it was early August, I was left with just enough to pick one set. I chose the Forest Speyer and Maggot Zombie (who I realize I've been calling Lab Zombie for some reason).  Let's look at them more closely.... 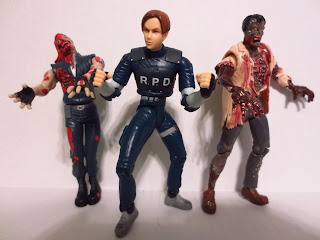 Forest Speyer comes in around 4 3/4 inches tall while the Maggot Zombie is exactly 5 inches tall.  Both of them look great, although I'd argue that the Maggot Zombie looks to be done in the more animated style of the human figures while Forest Speyer, one of the S.T.A.R.S. team members who has already been killed, is done in a much more realistic style.  While these guys look great with other Toy Biz Resident Evil figures, they'd also probably fit in with 90's Marvel figures. 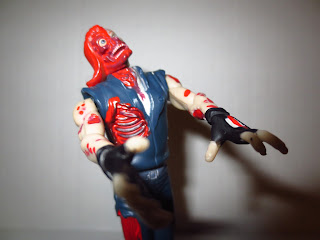 Forest doesn't really have any articulation. His shoulders have swivel joints, but the arms are spring activated to automatically lunge out when you're not holding the button.  It's part of his action feature and works perfectly for a zombie figure. Honestly, articulation on zombie figures never really seems like a necessity to me. They're just fine being awkward, stiff, and gross looking. Unless we're talking Army of Darkness styled deadites, most zombies don't need to be able to pull off martial arts movies. 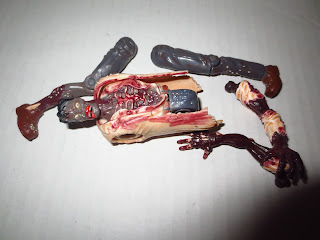 The Maggot Zombie (whom I've already mentioned was later mostly repainted into the generically named "Zombie") features hinged knees, swivel hips, swivel shoulders, and a swivel neck.  Just what you need to make him stand, stand with his arms lunged out, and lay on the ground as if he's been shot.  His arms and legs are also removable, which is a pretty cool feature.  It can be tricky getting them back in the socket, though. 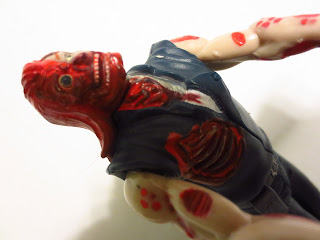 The sculpt on both of these guys is phenomenal.  I mean, I recognize they're from the late 90's so the sculpt has aged a bit, but they're still pretty darn impressive.  Forest is one of my favorite zombie sculpts ever. He doesn't look like your stereotypical rotted flesh, corpse; he's been freshly killed and thus looks like a recent victim come back to life.  While he's clad in a blue tactical outfit, there's plenty of tears and bite marks in the clothing that reveals some pretty gruesome detail.  A good chunk of the flesh on his right thigh is missing, revealing the muscle underneath, and the right side of his ribcage is fully exposed.  The arms are just gruesome with ripped flesh and exposed bone, and plenty of peck marks from the infected crows (just like in the game).  To top things off, just check out that face.  His head is cocked at an awkward angle, the flesh torn off of his lips makes his grimace more toothy than usual, and the right half of his face is completely missing.  His right eyeball looks massive and alert. Look out! 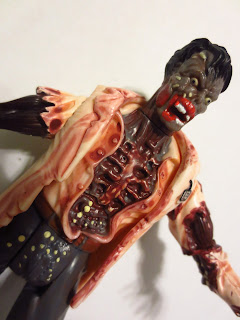 Maggot Zombie is also good. He's one of the researchers left to die and rot at the Spencer Mansion, so he doesn't look as fresh as Spencer. He's much more rotten and gooey.  His slacks, button up shirt, and torn lab coat are all ripped up and tattered, revealing what little is left of his putrid skin.  Most of this guy is muscle and bone, as you can see from looking at any part of him. One of his hands is still covered with some skin and flesh while the other shows the bones poking through.  He's also covered with little tiny maggots.  They're crawling all over his left leg and spilling out of what's left of his stomach. He's beautiful, in a very repulsive sort of way. 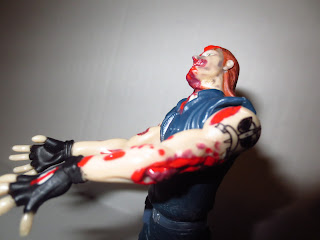 The paint perfectly accents every rich detail of the sculpts.  Forest's wounds feature different shades of red for the blood and the exposed tissue underneath his skin.  A heavy wash of blood covers his long hair and his teeth, making his recent death all the more apparent. 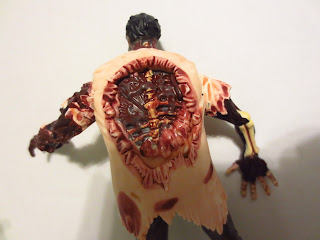 The maggot zombie's flesh is a mixture of grey, brown, and maroon.  The wash on his lab coat really looks like old, dried blood, and each little maggot is painted.  The yellowish white bones poking out in various places from his flesh are also nicely done.  There's just so much to appreciate here if you're a gore-hound! 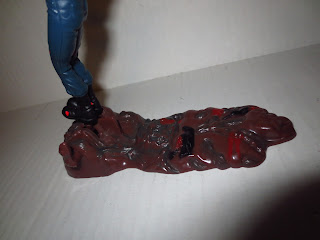 Forest comes with a really cool base that he can stand on.  It looks like a series of dirt and tree stumps with ripped up pieces of crow all over it.  The base has a feature that allows you to lay Forest flat and when a branch is turned, have him spring up, lifting his arms forward. It works pretty well, helps keep him stand, and looks nice on display.  The Maggot Zombie features his removable limbs and a removable lab coat, also. 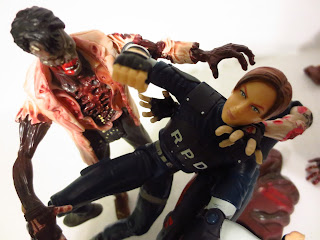 I own a lot of zombies:  All of the figures from Land of the Dead, some NECA Dawn of the Dead figures, Mezco's Attack of the Living Dead, and more modern Resident Evil figures than I know what to do with. I own all of these and I still think this is my favorite set of zombie figures of all time. They look good, are fun to play with, and nicely capture the essence of zombiedom.  Easily a confirmed epic on this set.

Barbecue17 loves Resident Evil so much that he actually unlocked Akuma in Resident Evil 2.  Yup. Didn't matter if EGM only meant it as an April Fool's Joke. He made it happen.
Posted by Barbecue17 at 12/03/2014