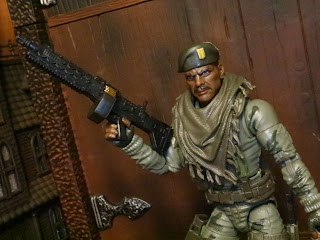 Ready to check out some new G.I. Joe Classified Series figures? Then let's take a look at one of my most anticipated figures, Sgt. Stalker. He's part of the newest series, along with Tomax and Xamot, and adds another member of the Original 13 to the Classified roster. Stalker, AKA Lonzo R. Wilkinson, wasn't just one of the original team members but was a substantial presence in both the Marvel comics and the 1980s animated series and had quite a few variants in the vintage toyline. The Classified Series version of Stalker is heavily influenced by the original 1982 figure though he has been nicely modernized with a more muted color scheme, some extra weaponry, and some extra equipment like his scarf and drag bag for his SMG. Let's take a look at Sgt. Stalker after the break and see what this Ranger brings to the fight... 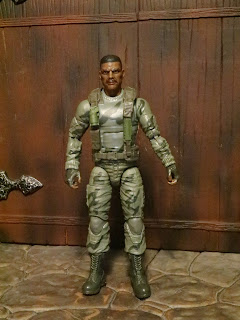 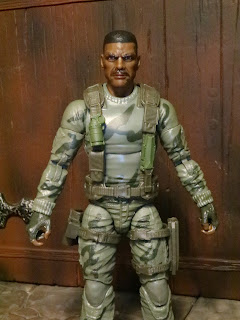 * Stalker uses a new body that features new, pinless joints on his limbs. He's wearing a very basic uniform, sort of a commando sweater with BDU pants, all of which is done up with grayish-green camouflage. Little details like the ribbing on the collars and cuffs of his shirt, the pattern of the material on his pants, and the non-removable web gear (though it is a separate piece) really brings some nice realism to the sculpt and shows off the detail that's possible on a 1/12th scale figure versus a 1/18th scale figure. 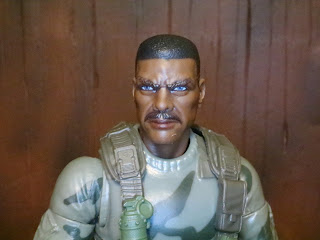 * Stalker has an excellent headsculpt, definitely one of the best in the line. I feel like I say that pretty often with the Classified Series portraits but overall I've loved most of them. The facial features are distinct and the paint/ printing is just excellent. Stalker does not look like the kind of guy any Cobra Troopers want to run into while out on patrol. He looks tough and noticeably older than other team members, which makes sense. From the comics you get the impression that Stalker is definitely an older, more experienced soldier. He also has a scar across the left side of his head which shows the stuff he's been through. 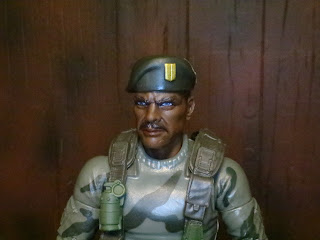 * Stalker's beret is removable. It's different from the previous berets but it still fits great on his head and it really completes the look. The berets have been excellent on the Classified figures so far. 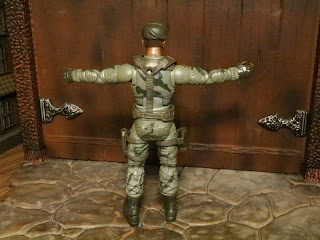 * The camouflage pattern goes all the way around Stalker's outfit. There are other cool details like the pocket son his sleeves and the back of the web gear that are worth flipping the figure around to check out. 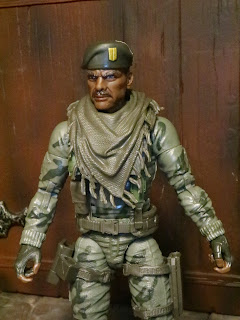 * Stalker includes a scarf which I believe is called a shemagh. You see these on a lot of Special Forces operators, especially in the Middle East. It's like a scarf that can function as a head wrap and protect against dust and sand when it's windy. Stalker's is a separate piece and while it is plastic, it's a little bit rubbery to fit over his shoulders and web gear. Just pop off his head, slip it on, and you're ready to go. It's a cool way to add a modernized touch to Stalker's look but it's also removable if you're wanting a more classic looking figure. 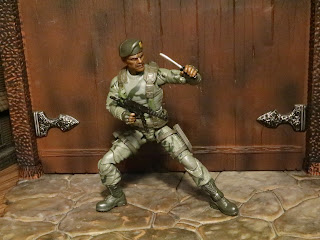 * The Classified Series has incredible articulation and Stalker is no exception. He looks great holding any of his weapons and has an excellent range of motion. These are without a doubt the most well articulated and highest quality figures on the market for the price out there. It's nice to see the pinless joints, too. Improvements are always welcome. 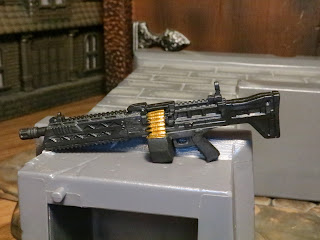 * Let's start checking out all of the wicked cool gear Stalker comes with because, baby, he is loaded down! First up is some sort of squad automatic weapon with a box magazine attached. It's a nifty weapon that gives Stalker some serious firepower when needed, yet it's still compact enough to carry around on long missions. It even looks like it could serve as a primary assault rifle. The detail is fantastic and everything is clean and sharp on this tool. 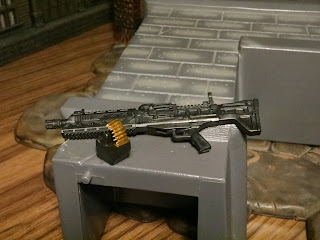 * The box magazine is removable. It plugs into the bottom of the weapon easily and even features painted bullets attached to a belt. 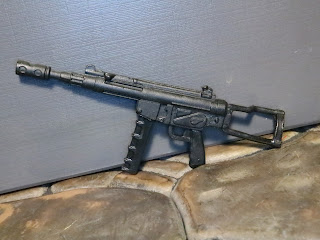 * Sgt. Stalker also comes with his classic "M-32 "Pulverizer" submachine gun. It's not a real designation, but Stalker's weapon does seem to be based on early designs of the MP5 submachine gun which had straight magazines. It looks modern enough here (unlike when the 25th Anniversary Stalker came with an MP 40) and scratches the itch of many collectors who want a mostly vintage Stalker. 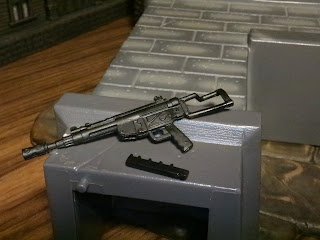 * The magazine is removable here, too, so have fun putting Stalker in cool poses where he's reloading. 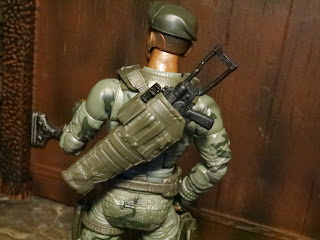 * Like the Cobra Officer, Stalker comes with a holster for one of his weapons (it's not the same sculpt, though). The M32 fits inside securely and there's even a place to store the removable magazine separately for safe keeping. It's a cool way to allow Stalker to carry all of his weapons without just using the basic peg system we saw earlier in the line (though I did like that, too). 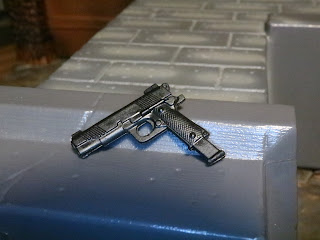 * Stalker also comes with a nicely detailed pistol equipped with an extended magazine. It's nothing too special or futuristic; just a standard, reliable weapon with a few extra rounds in the mag. 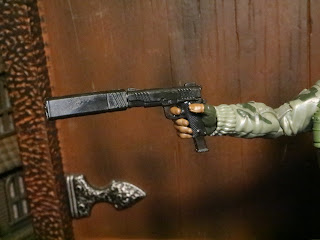 * When Stalker needs to keep things a bit quieter he can pop on this boxy suppressor and get to work. It looks like an Osprey from SilencerCo to me. 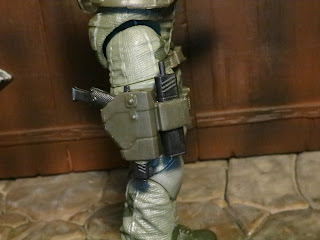 * Stalker can tote his pistol and suppressor around in his holster. It securely stores both pieces of equipment and keeps them close at hand. 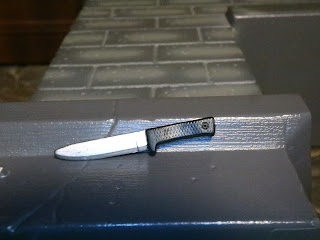 * Stalker also comes with a basic knife. The handles has a cool texture and the blade is sharp and shiny. 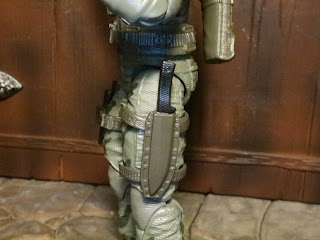 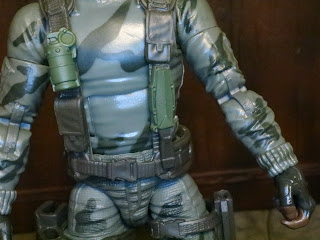 The Negatives:
* I have two issues with Stalker and the first is with the knife on his web gear: It's not removable! That's inexcusable for a 1/12th scale line! Toy Biz pulled it off on a Resident Evil figure back in 1998 and Hasbro was giving 1/18th scale Joes removable knives on their web gear during the post G.I. Joe: Resolute era, so what's going on? I was absolutely crushed to learn this knife wasn't removable. Crushed! 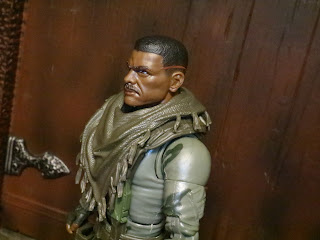 * My second issue is with Stalker's shemagh. The scarf / shemagh is really cool but it sits on Stalker's shoulders a bit loosely and seems to be a bit too thick. If it actually attached somehow or if it was a bit thinner, I think it would have been perfect. 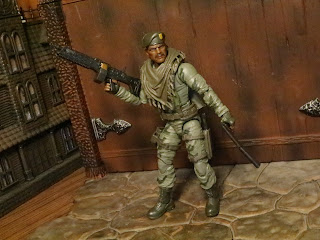