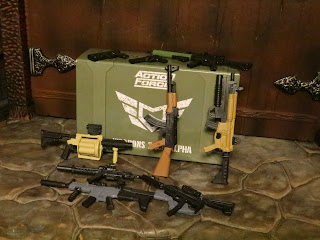 I had preordered the Action Force Weapons Pack Alpha through Big Bad Toy Store and it arrived in my pile of loot sometime this summer. I shipped my pile of loot sometime last month and I'm finally getting around to checking out another of the excellent accessory packs from Valaverse. I reviewed Weapons Pack Bravo back in February and I reviewed the original Action Force Prototype Armaments set in 2021, so I've had a bit of experience with the Valaverse Action Force accessories.  This set is $13 dollars and comes with 10 weapons plus extra magazines and some excellent firing effects. That's a pretty solid deal, especially considering the price hike we see with most action figure lines when a deluxe figure jumps up $10 dollars or more due to the presence of an extra accessory or two. There's enough goodies here to nicely equip a good six figures to eight figures, whether they're from Action Force, Marvel Legends, G.I. Joe: The Classified Series, or some other 1/12th scale line. Let's take a look at the long awaited Weapons Pack Alpha after the break... 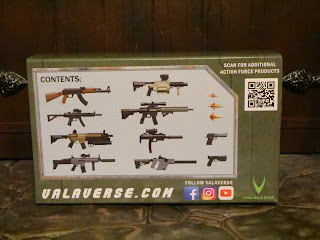 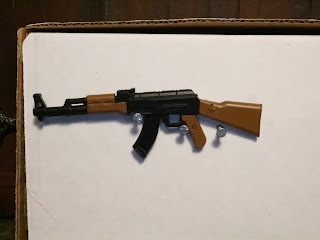 * Both Weapons Pack Bravo and the Prototype Armaments set have come with a modern AK-100 series rifle but this one has brown paint applications to show off the wooden details. This AK is still really nice sculpt with fantastic detail and you'll surely find a great use for it. 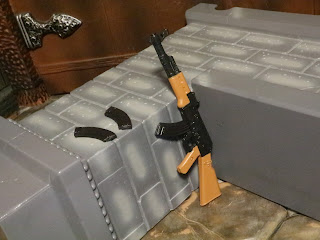 * The magazine is removable from the weapon and can be replaced with any of the three included banana magazines. 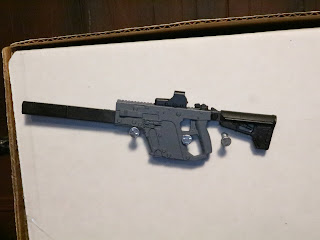 * Weapons Pack Bravo and the Prototype Armaments set have also both included KRISS Vectors. These are used by the SWARM troopers in Action Force but this model has a more basic gray and black color scheme. The model in Action Force is also heavily modified with an enhanced barrel shroud to prevent you from touching the barrel as it gets hot from firing multiple rounds. 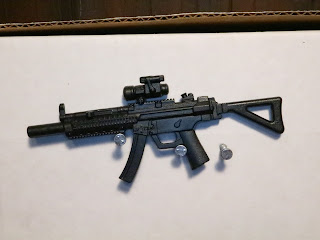 *  Another weapon that has come in both sets I've previously reviewed is this modified H&K MP5 with a side folding butt stock, a scope, and a suppressor. This is a fantastic tactical weapon which is molded in all black, like the Prototype Armaments version. 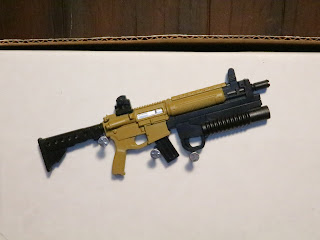 * This HK416 with an under the barrel 40mm grenade launcher appeared in the Prototype Armaments kit but here it has a fantastic, upgraded paint job. This is a great standard weapon for any of your teams and the detail is really impressive with the addition of the tan body and the silver ejection port. The sculpt is fantastic and the paint applications just make it even better. 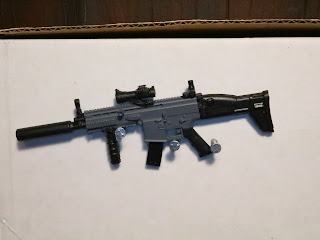 * The FN SCAR makes another great primary weapon for your operators. The level of detail and the gadgetry on these weapons, things like the  scope on top, suppressor, and forward grip, make me think back to the Resaurus/ Plan B Toys' Special Forces line. That's absolutely high praise, too. 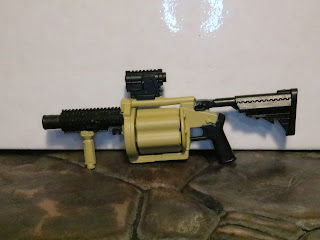 * This painted Milkor MGL, a drum magazine grenade launcher, holds six 40mm grenades and gives your figures some heavy firepower. The cylinder rotates on this model and it's an upgrade over most other 1/12th scale grenade launchers you'll find. It's also sporting a snazzy tan and black paintjob. 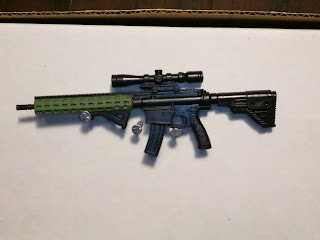 * When I looked at this weapon in the Prototype Armaments set I determined it was a variant of the HK416 modified to be a marksman's weapon. It's definitely backing a longer range scope and an enhanced barrel, this time with a green barrel shroud. 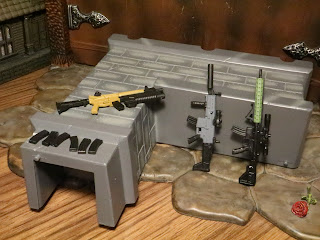 * The three non AK assault rifles all have removable magazines, plus a complement of six extra magazines for gearing up your figures. That's nine of these magazines overall in the set. 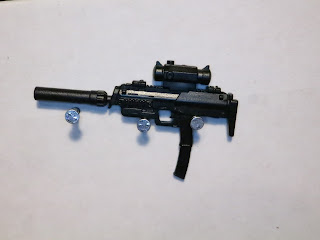 * The H&K MP7 with an extended magazine, suppressor, and a scope on top also came in all black in the Prototype set and with green highlights in the Bravo set.. There's nothing removable here, but it's still a  great looking weapon for a variety of figures needing something small, suppressed, and tactical. Would Snake Eyes trade in his beloved Uzi for one of these? 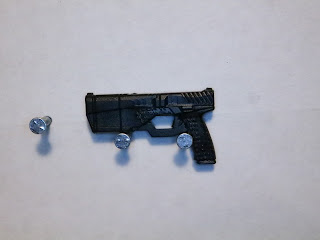 * I'm still not sure if this modern pistol is based on a real firearm but it seems to be the go to pistol for the Steel Brigade.  The grip looks like a pretty standard modern pistol but the front seems rather advanced. Maybe it has a built in suppressor or recoil reducer or something? The detail is awesome and I really like the overall look. (It turns out this is a SilencerCo Maxim 9, a pistol with a built in suppressor/ silencer.) 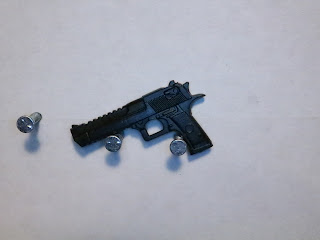 * This set includes another all black Desert Eagle, the go to hand cannon for action heroes of all scales and sizes. 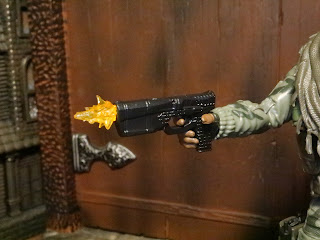 * Like Weapons Pack Bravo, this set comes with three different styles of muzzle effects for your display. These not only fit Action Force guns but they also fit nicely on many G.I. Joe Classified Series weapons and the hollow barreled Marvel Legends weapons. The first firing effect is a bit smaller and is intended for pistols and such but it'll fit in any of the weapons with hollow barrels as well. That's most of the Action Force weapons. 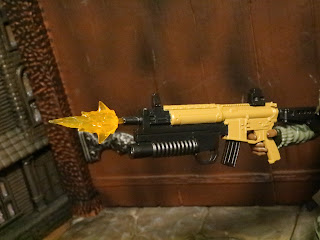 * The second effect is a bit larger and can also fit in any weapon with a hollow barrel. The tip on these look and feel like they could be a bit fragile but so far I haven't had any issues. 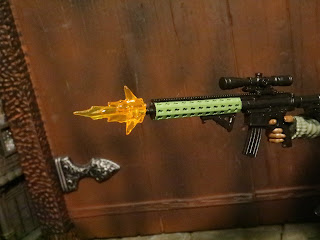 * The final firing effect is different in that it actually slips over the barrel of certain weapons with a much thinner barrel, like the modified HK416 here. 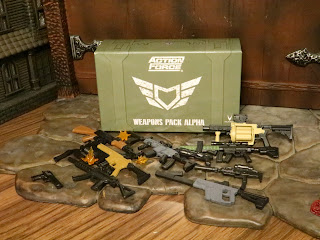 Getting 10 highly detailed weapons, six of which have detailed paint jobs and five having removable magazines or moving parts (the grenade launchers drum), plus extra magazines and a set of firing effects for $13 bucks is a very solid deal. Whatever 1/12th scale line your using these with, you ought to end up being very satisfied. Whether you're a straight up Action Force collector, you blend the line into the G.I.Joe Classified Series, or you're just using Action Force parts to supplement another line, you definitely have to admit that Valaverse puts out some quality product. This is an Epic set that's well worth using to gear up your grunts.