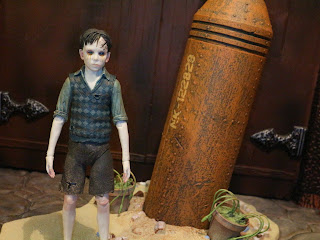 January is almost over and today and tomorrow I'm finishing up my reviews of all of the cool stuff I picked up in 2018. I've only got a few things left I'm checking out and today I'm checking out a very cool Christmas present I received: Santi from NECA's The Guillermo Del Toro Signature Collection. NECA has absolutely been putting out some incredible stuff lately and the Guillermo Del Toro collection brings together the modern NECA penchant for spectacular action figures with the classic NECA habit of picking up licenses no one else is doing. Guillermo Del Toro is one of my favorite directors, easily in my top 5, and while he definitely crosses multiple genres he's known for the unique horror themed characters in his films. Santi comes from Del Toro's 2001 film The Devil's Backbone. It's a great movie that simultaneously manages to be a murder mystery, a coming of age story, a war tale, and horror film. It's definitely the kind of horror film that even someone who doesn't like horror films should appreciate as it feels like a good old fashioned ghost story. Anyways Pacific Rim and the Hellboy series have received action figures but Del Toro's other films have not, which is where NECA's line comes in. So far figures from The Devil's Backbone and Pan's Labyrinth have been announced. Santi here is the lone figure from The Devil's Backbone and the first release in the series, so let's check him out today. More spooky goodness after the break... 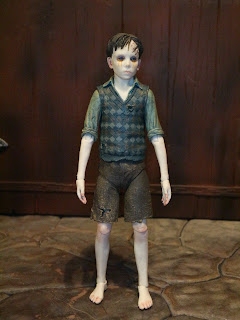 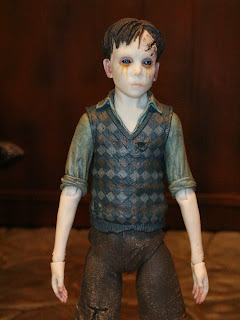 
* Santi looks incredible. The character has such a striking appearance in film, managing to be both startling and sympathetic at the same time. Santi is a ghost and is dressed in the worn out clothes he died in. The paint work and texture on the outfit is amazing, particularly on the plaid vest. The work on the skin is excellent as well, giving Santi the creepy, pale vibe that appeared in a number of late 90's/ early 2000's horror movies. 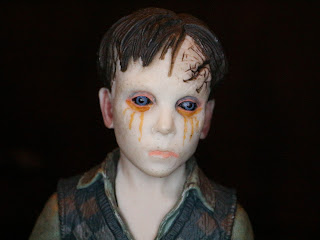 * The likeness is quite impressive. Now, it's not a dead on likeness, but that's tough as Santi is usually filmed in the shadows and with lots of lighting effects and such. Still, the work here is top notch and the character is easily recognizable. 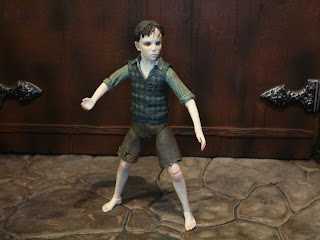 * While Santi pretty much just needs to stand around and look ominous, NECA still gave him full articulation. He has lots of swivel/ hinge joints and an incredibly expressive balljointed head. He's not really designed to take extreme poses, but he can absolutely take some wonderfully expressive poses. 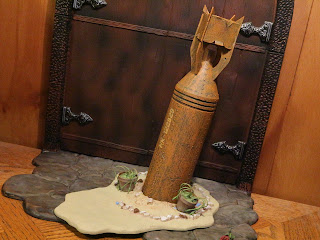 * One of the most impressive aspects of this series of figures seems like it might be the display bases they include. Santi comes with a base featuring the bomb that was dropped on the orphanage. Santi was murdered the day the bomb dropped on the orphanage and while it didn't go off, it still stands in the middle of the courtyard as a reminder of the war. It makes for a great way to display the figure and really captures the spirit of the film. 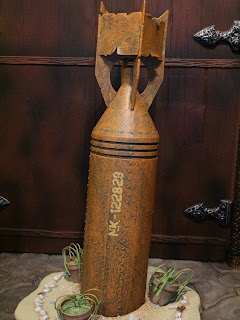 * The bomb is a separate piece that snaps down into the base. It can't be used as a separate accessory (the front of the bomb is simply flat with notches) but it looks darn fine on display. The paint work makes it look worn and rusty, as it has been sitting out exposed to the elements. 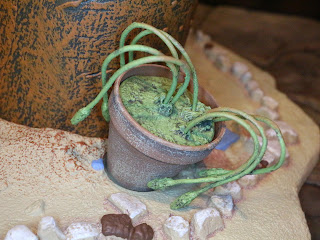 * The unusual plants in flower pots are sitting around the base of the bomb in the middle of a ring of colorful stones. Again, the sculpting is top notch and wonderfully detailed. 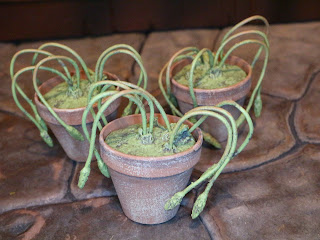 * The potted plants are removable (there are three of them) so if you want to use them somewhere else, you can. They do snap into the base pretty firmly, so you might not want to take them in and out, but they're definitely quite versatile. 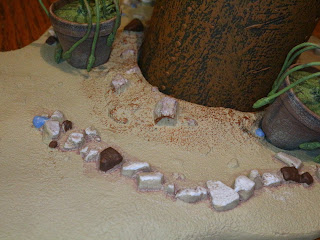 *  Here's another cool look at the various details on the base, particularly the colorful stones. I love the look of this piece and how interesting it is. 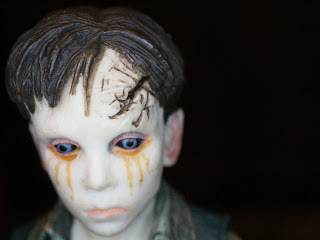 * The only thing I don't like about this figure is the wound on Santi's head. In the film Santi has an otherworldly appearance as the wound on his head looks like it's constantly bleeding. Rather than dripping, however, the blood is floating up as if he was bleeding underwater. It's a key part of the character's appearance and I would have like to have seen NECA try to tackle it, maybe with an alternate portrait using translucent plastic. 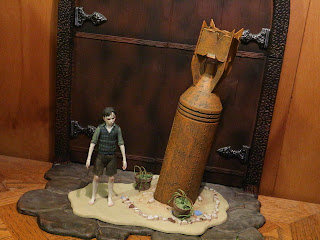 I love when NECA pursues a smaller, less popular license like this. While Santi is a good figure, paired with the excellent display base he is a Great and a 1/2 one. He's just so unusual and striking that folks viewing your collection will definitely be intrigued by him. I'm excited to see where this line goes. While we've seen a few Pan's Labyrinth figures, I'd also love to see some figures from Crimson Peak, The Shape of Water, Cronos, and heck, even Mimic. We'll see what happens.