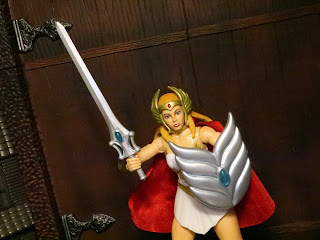 Next up on this Masterverse marathon is the Princess of Power herself, She-Ra! There has been a rather decent stream of She-Ra merchandise over the past few years or so but this deluxe set was one of my most anticipated items. Besides being a 7 inch scaled Masterverse She-Ra figure, this deluxe package seemed like it would nicely allow for some customization in creating a couple different looks for Adora. I was really excited to stumble upon both her and Hordak at a Target at the beginning of October as it's been a while since I found new Masterverse figures in a store (I actually pulled these two out of sealed cases sitting on a cart). Since Princess of Power seems to be getting an ongoing subset in Masterverse, you'll definitely want a She-Ra to rally her allies and lead the charge against her enemies. How did she turn out? Find out after the break... 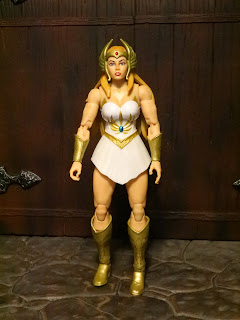 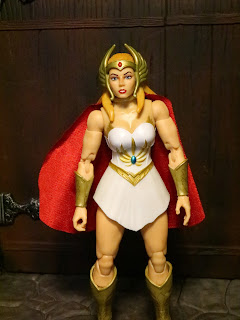 * She-Ra is an excellent looking figure. It's been a long time since the MOTUC She-Ra figures were released, and even 3 years since Super7's Filmation inspired 7 inch figure, so it's nice to She-Ra in this scale again. I think she turned out pretty well with an outfit that's very reminiscent of her Filmation appearance, but with more detail in the sculpt. Her bracers have printing on them, the design on her dress and belt are sculpted rather than just painted on, and the colors are quite vivid. The gold looks metallic while the white of her dress is very clean and bright. 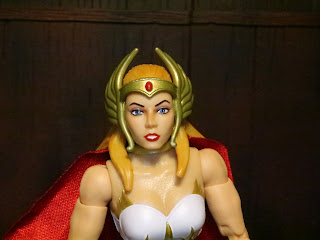 * The headsculpt isn't perfect, but it's not bad, either. It's clear that someone was trying to blend together the Masterverse style and She-Ra's Filmation appearance with the open mouth. Her hair is really well done (with a wash to bring out the detail) and her tiara is perfect. I love the look of it! It's perfect and very dramatic. 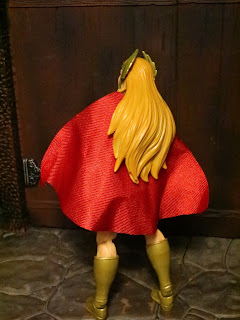 * She-Ra's cape is made from fabric, similar to Hordak's cape. It hangs well, flows nicely, and is attached around her neck via a simple collar. 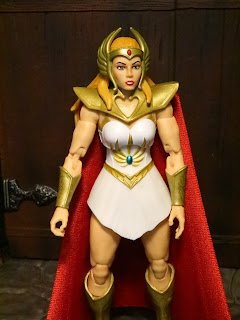 * A really cool additional item included in this set is some shoulder armor with a full length cape. Just pop off She-Ra's head and you can armor her up with this gear. It's actually based on an outfit from later in the Netflix She-Ra and the Princesses of Power show, so that's a cool not to that era of the PoP universe while still keeping this as a fairly classic She-Ra. I'd be actually quite thrilled to see the Netflix designs make it into this line at some point, though, particularly some of characters like Mermista, Entrapta, Sea Hawk, and Mermista as Sea-Ra! 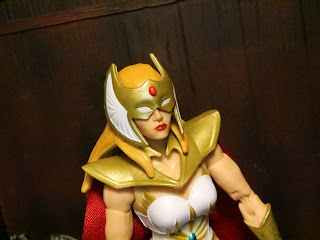 * To really armor She-Ra is this really cool tiara/ mask that features "whited out" eyes, kind of like a superhero mask. I think this is actually an homage to the original vintage She-Ra figure where the idea was that you flipped She-Ra's tiara around to create a mask, thus concealing her identity. This is a way cooler concept and it makes She-Ra like like she's ready to take on the whole Horde Empire herself. 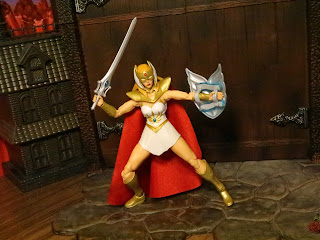 * While it's as smooth as some lines, I'm still a fan of the articulation in Masterverse. It's definitely one of the best lines in terms of the quality of the figure builds and articulation scheme that Mattel has put out and it does keep improving. She-Ra moves nicely and has plenty of useful joints with a great range of motion. She's rally fun to pose and mess around with. 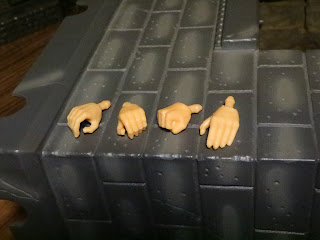 * She-Ra comes with four hands you can swap out: Two standard grips, a right handed fist for punching out Catra, and a left handed open palm for holding her shield or smacking Imp when he starts getting too mouthy. 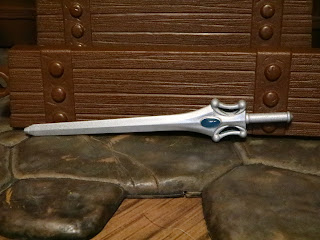 * The Sword of Protection is included, of course. It's quite Filmation inspired with the longer, thinner blade of the Masterverse swords and a translucent gem of Protection at the base of the blade. 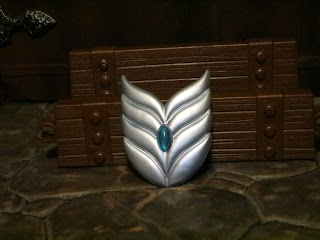 * Last up is She-Ra's shield, which could actually just be her sword transformed into a shield (that's how it worked in the cartoon). It's a solid accessory with the useful, flexible loops in the back that allow the figure to easily hold the shield properly. 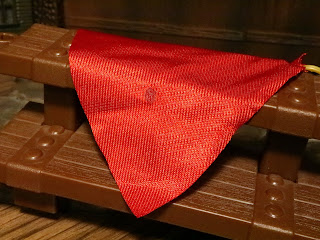 * My only complaint is that the short cape on my She-Ra has a stain on it. It actually feels like an errant bit of glue or something rather than a true stain. I haven't tried any stain remover or tactics like freezing the stain and trying to chip it off yet, but this is kind of frustrating for a fresh out of the package figure. 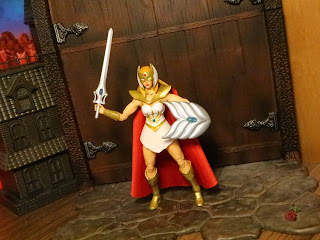 I really like this figure but for a deluxe figure, she feels kind of lacking. The classic styled Masterverse Teela, released earlier this year, was a standard figure but the only thing extra She-Ra has over her are the capes. She-Ra is a really solid figure and I like her a lot, but I really don't feel like the deluxe pricing is warranted here at all. She's still a Good figure, but there doesn't seem to be any reason she couldn't have been part of a standard series. She should have came with a couple different swords, maybe a vintage to inspired or Netflix inspired sword, and maybe someone like Kowl or Loo-Kee. It seems like a lot of companies have been really iffy on what constitutes a "deluxe" figure lately, haven't they?

I've reviewed so many different toys and collectibles of She-Ra/ Adora that I've given her a review archive of her own. Check out the Crystal Castle for all of the She-Ra reviews you need to start your own Great Rebellion!