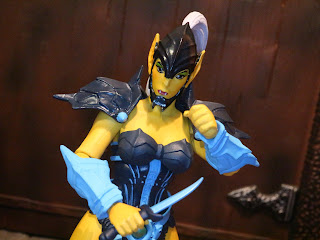 Today I'm checking out the second Masters of the Universe homage figure from the Soul Spiller series of Mythic Legions figures and this time it's Malynna, an evil Uubyr who pays tribute to Evil-Lyn. Malynna is an Uubyr which is a hybrid of a vampire and an orc and who hangs around as part of the villainous Circle of Poxxus. While I haven't really collected Mythic Legions, I've lately been picking up the MOTU tribute figures. What's really cool about these is that they really show how strong the MOTU color palettes were for the vintage figures. Just seeing the yellow and that light blue color on this figure alone immediately brings to mind the vintage Evil-Lyn figure. Like most other Mythic Legions figures, Malynna seems to feature a number of reused parts mixed with some new parts and colors. Since this is my first female Mythic Legions figure, she's all new to me, though. Let's check out Malynna after the break... 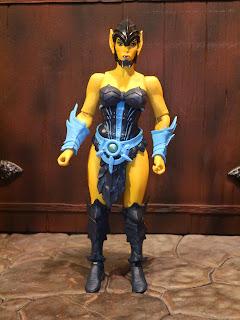 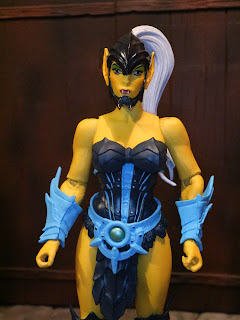 
* While Mythic Legions relies on reusing multiple different parts (kind of like Masters of the Universe, actually), it's the color combinations that really sell these figures and, man, Malynna looks really, really cool. I love her bright yellow skin. It stands out, just like Evil-Lyn's did in the vintage toyline, and it looks incredible with a mixture of dark blue and powder blue armor. The sculpting is all excellent here with very sharp, angular lines on the armor and neat, clean paintwork. 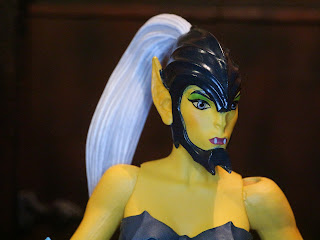 * Since Malynna is a hybrid between a vampire and an orc, you can see elements of both in her sculpt. She's got long, pointy ears, a thin, almost serpent-like nose, and some sharp exposed fangs. The paintwork is quite sharp and her makeup matches Evil Lyn's classic appearance quite well. Interestingly, she is donning a battle helmet. I'm assuming this might be a reused portrait, but I don't really know that for sure. It's a cool sculpt though, and the helmet kind of reminds me of Scorpia's helmet. 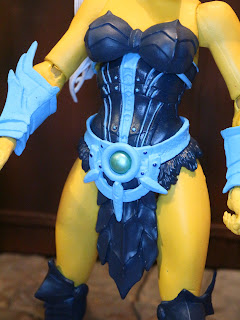 * The armor is incredible. I mentioned it above but, looking at it more closely, there really is a lot to appreciate. It kind of reminds me of a mixture between the vintage Evil-Lyn's armor design and the 200x Evil-Lyn's design. The sculpting work on the corset is fantastic. 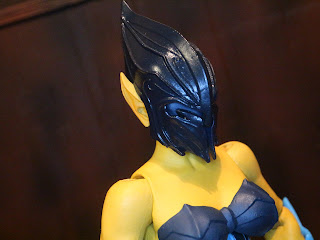 * If you're looking for something different, Malynna also comes with this full-face covering helmet. It's kind of cool looking and while I'm not sure it goes with the rest of the figure (maybe it should have been painted blue?) It does give you another display option. It really looks like something out of the Elder Scrolls, doesn't it? 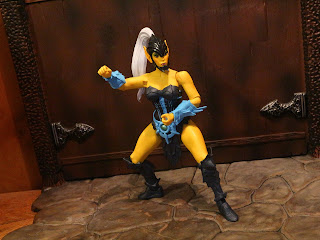 *  The articulation on the Mythic Legions line is pretty solid. It reminds me a lot of Masters of the Universe Classics except the joints have a better range of motion and there are a few extra joints such as better ankles, hinged wrists, and the balljointed mid-torso. Malynna feels as sturdy as the guys in the line, kind of like MOTUC or Marvel Legends. The plastic quality is excellent and everything feels very sturdy and well made.The Four Horsemen really have done an excellent job on the consistency of this line from everything I've heard and experienced. 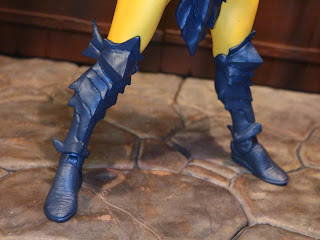 * Check out those boots. They're sharp like a tack! 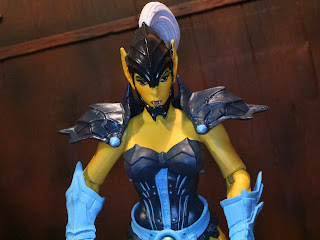 * Interchangeable shoulder pads are one of the highlights of this line and Malynna absolutely comes with some shoulder pads that can be easily attached to the figure. If you want a more warrior-like feel to Malynna, then go with these. 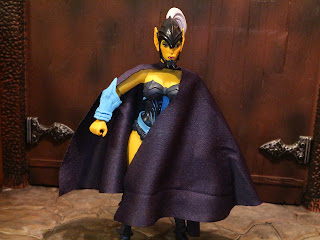 * If you want more of a traditional sorceress feel for Malynna, then you will probably want to have her sporting this cool purple cape. Her head pops off easily (it's a true balljoint) and the cape fits right around her neck. The cape is made from a fairly high quality material and hangs really nicely over the figure. 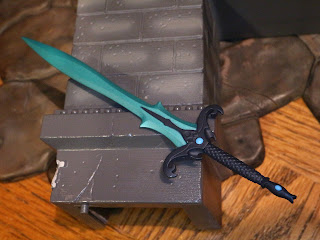 * I love this sword! It's gorgeous! The blade is brilliant and that color! Wow! It really pops! 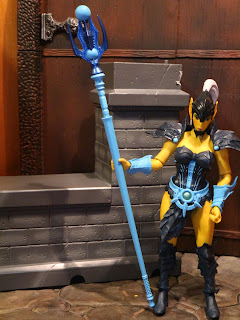 * Malynna also comes wielding a two piece staff. The top of the staff (which kind of looks like the Cosmic Key) is a separate piece that plugs into the main blue staff. It's clearly an homage to Evil Lyn's vintage accessory and it makes for a nice way to show the character's sorcery roots. 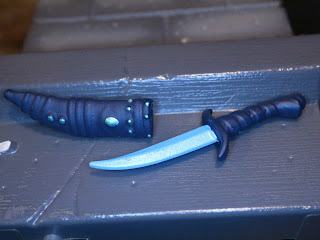 * My favorite accessory might be this cool little dagger, though. It's reminiscent of Evil-Lyn's dagger in the 200x MOTU line. It even features a working sheathe! 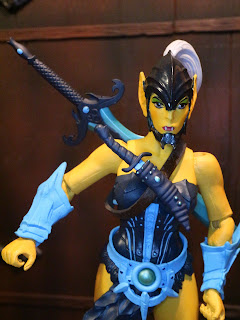 * To stow her sword or sheathe away when not in use, Malynna (like most other figures, seemingly) has a strap that can fit across her torso. There's a slit in the strap that allows for the sword to slide in and stay securely on her back while the sheathe for the dagger can just clip right on. 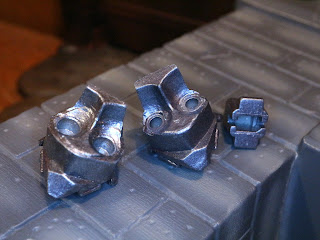 * Malynna includes three pieces which I'm not sure about, but I believe they're intended to allow you to attach wings and other pieces onto the back of the figure. There is a rectangular slot on the back of the figure that can accommodate any of the three parts. They don't mean anything to me but for collectors of this line, they're probably useful for customizing. 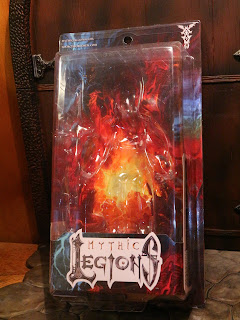 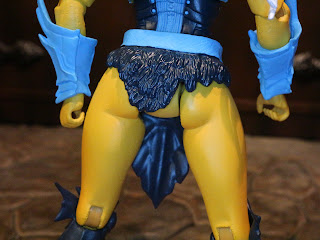 
* I pointed it out when I reviewed the Orc Army Builder 3 figure but the rear loin cloths on these figures are far too short. Seriously, Malynna is going commando here. The crotch pieces either need a paint application or the back of the trunks just needs to be a bit longer. It just looks awkward. 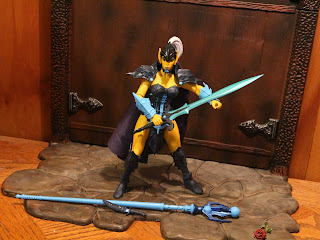 I only own three Mythic Legions figures (so far) but I really do think Malynna is my favorite. She certainly works as an homage to Evil-Lyn which is definitely why I picked her up, but she's actually a darn fine figure and an interesting looking character on her own, too. The design, colors, and accessories really make this one feel like she's worth a purchase. Malynna is an Epic figure and definitely a worthy Mythic Legions figure to check out if you're interested in the line.


This is the first figure of Malynna I've reviewed on the site. For more Mythic Legions reviews, check out the following: