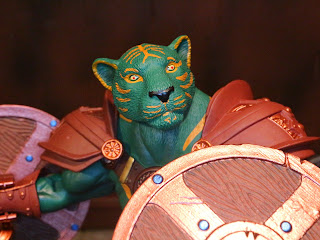 Prior to a month or so ago the only Mythic Legions figure I owned was the Orc Legion Builder 3 figure but recently Four Horsemen Studios released the Soul Spiller series of figures and I just had to pick up the Masters of the Universe inspired characters from the line. Today I'm checking out Cowarros, a heroic feline warrior who serves under the lion warrior Leodysseus. Of course, this guy is absolutely inspired by Cringer/ Battle Cat from Masters of the Universe. I mean, where else have you ever seen a green tiger with orange stripes? My guess is that the name Cowarros might be a play on the word "coward" since the Filmation version of Cringer was notoriously cowardly (plus, his name featured the root word "cringe"). Cowarros went on pre-order last summer but he's finally here to either bolster your Mythic Legions or give your MOTUC collection an alternate take on Cringer. Let's check him out after the break... 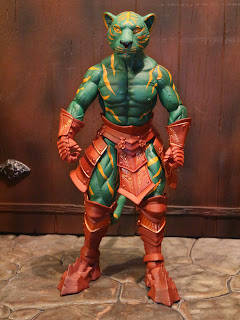 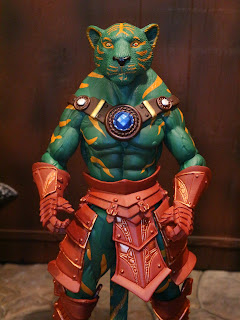 * Mythic Legions reuses many body parts from previous figures so my guess is that most of these parts are reused here. Still, it's the overall presentation and paintwork that really makes this guy shine. The paintwork is excellent and really does pay excellent homage to Battle Cat's iconic design. The colors really pop and the addition of all of the red armor truly ties the figure together as it beautifully matches the look of Battle Cat's classic armor and helmet. To give Cowarros a larger, more animal-like appearance, the neck piece (everything from the brown "necklace" up to the head) is a separate piece that slides over the neck when the head is removed. It's a cool way of adding some more personality to the figure and, if it isn't your thing, it is easily removable. 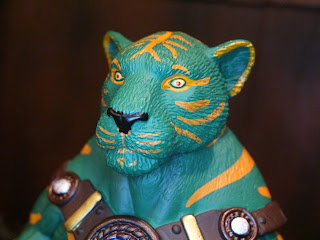 * Cowarros has an incredible headsculpt that looks very realistic rather than stylized. I love the detail in the fur and the paint work on the stripes and eyes makes for a rather striking portrait. It might be a bit too passive for a warrior cat but the sculpt is still quite nice. 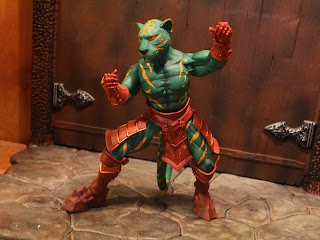 * The articulation on the Mythic Legions line is pretty solid. It reminds me a lot of Masters of the Universe Classics except the joints have a better range of motion and there are a few extra joints such as better ankles, hinged wrists, and the balljointed waist. These guys feel really durable, kind of like MOTUC or Marvel Legends. The plastic quality is excellent and everything feels very sturdy and well made.The Four Horsemen really have done an excellent job on the consistency of this line from everything I've heard and experienced. 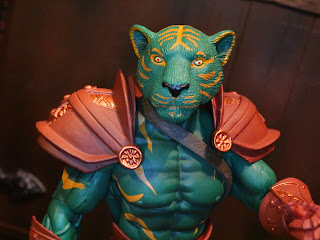 * To make this guy look really, really cool you can give him some pauldrons. Both the neck piece and the figure's torso have holes for the pauldron pieces, so they can just plug in quite easily. The look fantastic, especially due to the metallic highlights on them. 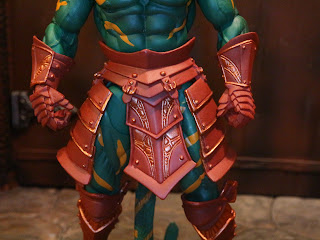 * Cowarros is wearing some pretty serious looking armor around his waist. It's nicely sculpted, features intricately painted metallic highlights, and is molded from a very soft rubbery plastic which ensures that the articulation isn't impeded at all. 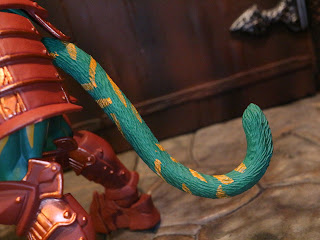 * Since he's a cat, Cowarros has a tail. Not only is it fuzzy and curled, but it's also balljointed. I like this, for some reason. It's just funny. 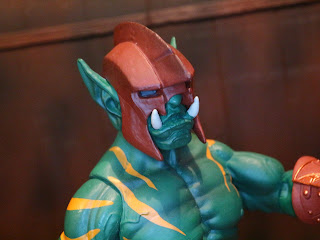 * As an extra, maybe in case you just want to build an armor of orcs, Four Horsemen Studios tossed in an extra orc head, complete with a red helmet. It's the same headsculpt that came with Orc Legion Builder 3 figure (and probably other figures, too) but it's a cool extra. 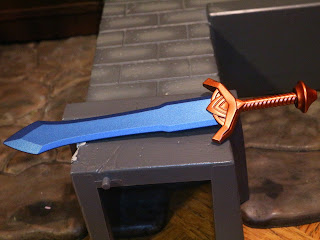 * I love this sword! The metallic red hilt and pommel go beautifully with the metallic blue blade. It's a very regal, very noble looking sword Cowarros looks excellent wielding it. 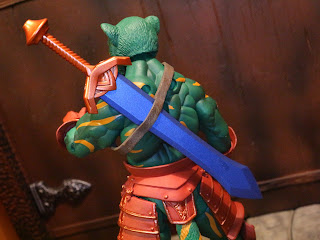 * To stow the sword away when he's not using it, Cowarros has a strap that can fit across his shoulder. There's a slit in the strap that allows for the blade to slide in and stay securely on Cowarro's back. 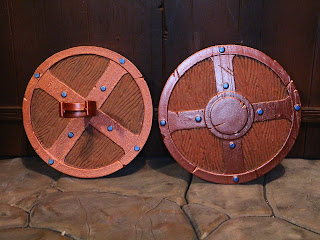 * Cowarros also comes with two shields (the wrist clips are separate pieces) that feature wooden interiors with beautiful metallic edges. I wonder why Cowarros comes with two shields, though? Maybe to kind of replicate the look of Battle Cat's "shoulder" armor in the 200x series (which the Four Horsemen designed and sculpted)? 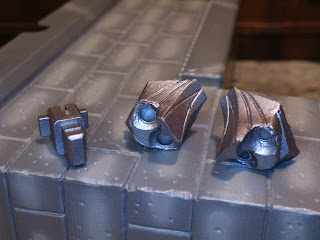 * Cowarros includes three pieces which I'm not sure about, but I believe they're intended to allow you to attach wings and other pieces onto the back of the figure. There is a rectangular slot on the back of the figure that can accommodate any of the three parts. They don't mean anything to me but for collectors of this line, they're probably useful for customizing. 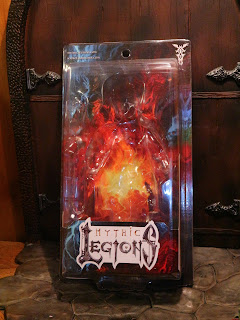 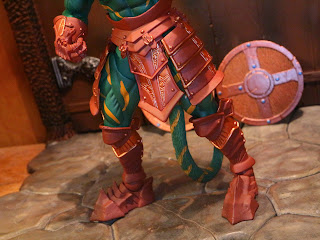 * I have two negatives here: First, the legs and ankles are a bit loose. Not terribly loose, but definitely loose enough that it takes a bit of work to get him to stand in some poses.

* Second, I do wish that the Four Horsemen had actually used a body that looked furry and fuzzy. The tail and head are fuzzy, but the body is smooth, just like the regular human or orc bodies. 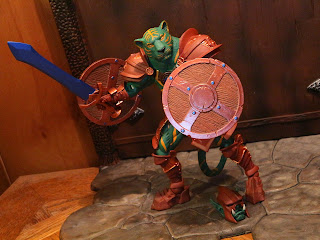 The Mythic Legions line is definitely a really cool fantasy line. Honestly, the only reason I never have really collected it is because of the amount of product they put out and the cost. It's definitely a line you would have to commit too. Cowarros is a great figure, though, whether you dig this line or are simply picking him up because he's a throwback to Cringer/ Batt;e Cat. While he's not perfect, he's still a Great and a 1/2 figure with an incredible look. The previous Masters of the Universe inspired figures like Keltuss and Adamonn have been fairly difficult to track down, so you might want to pounce on Cowarros while you can.


This is the first action figure of Cowarros I've reviewed on the site. For more Mythic Legions reviews, check out the following:
Mythic Legions by Four Horsemen Studios
Orc Legion Builder 3