Action Figure Review: The Joker from One:12 Collective DC Universe by Mezco 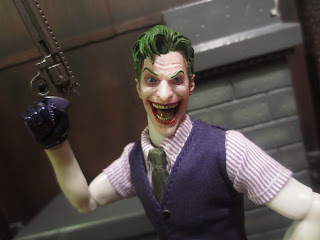 Mezco just released the Joker in their One:12 Collective range of action figures, making him only the second superhero baddie to be released in the line (the first being the Mutant Leader). Sneaking out at the tail end of February, the Joker was the last release in what turned our to be a very busy month for One:12 Collective. I'm not sure the line has ever been hotter and more and more collectors are starting to pay attention to this line. It's a crucial time for the line right now and while figures like the Punisher and Daredevil demonstrate how perfect this line can be, the Joker is an example of a few of the pitfalls this line needs to avoid in the future. Let me temper that comment by saying that the Joker is a gorgeous figure with two of the most amazing (if not the two most amazing) Joker headsculpts I've ever seen; it's just that it also has some odd decisions, particularly in regards to the alternate hands and the accessories, that kind of make you think twice about this one. Let's take a closer look at Mezco's take on the clown prince of crime after the break... 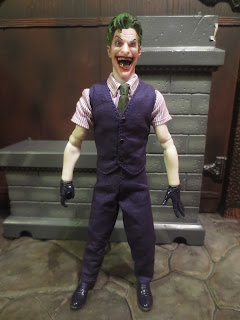 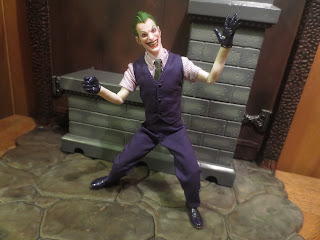 * The Joker absolutely does not have the same near flawless articulation that every other One:12 Collective figure I've purchased has, due to both his design (no butterfly joints or double hinged elbows) and his more restrictive outfit. Still, the articulation does feel pretty durable and absolutely makes the figure capable of taking some great poses. It's solid, but not as impressive as the rest of the line. 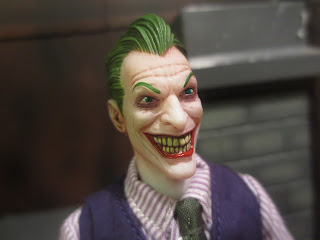 * This is a really good headsculpt. Heck, this is an incredible Joker headsculpt. Those teeth, man! And the paint work on his skin? And the level of detail given to his slicked back hair? Flawless! This is an amazing Joker portrait. Like the best of Mezco's work on comic based lines so far, it borrows from multiple sources without committing  to just one. This is just awesome. Unlike many of the other heads, it actually features the neck as part of the sculpt with the portrait plugging down into the figure's neck. It works great and looks perfect with the collared shirt. 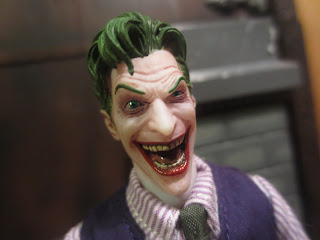 * This one's even better! The second portrait certainly looks like the same Joker, but the laughing expression, cocked eyebrow, and tussled hair make him even cooler. Again, I can see elements of so many different depictions of the Joker in here (including a touch of Cesar Romero around the eyes) and I love it. This might be my favorite Joker headsculpt ever on an action figure. 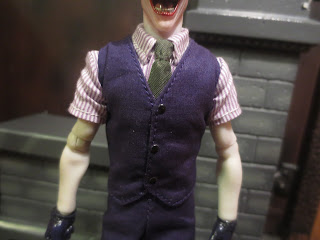 * The Joker's base outfit is a dark purple suit with a vest and a purple and white striped shirt with a green tie. It's really well tailored and, even though I'm not a big fan of the look of short sleeved dress shirts, it does help to maintain some articulation while the Joker is wearing his jacket. The fact that the jacket is so easily removable also gives you a distinctive second look for the Joker. 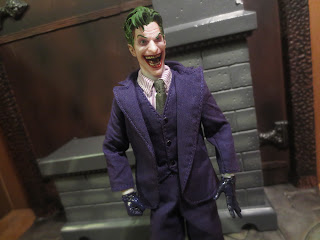 * Here's a picture of the jacket on. It really looks very good. It's definitely not at all oversized like a Mego figure, although it does lack the perfect fit of most other One:12 Collective figures. Mezco's clearly trying some new things out, though, and the Joker shows an impressive ability to create clothing in this scale. 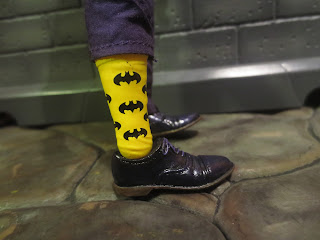 * Want to see a cool little detail? Besides just wearing snazzy dress shoes, the Joker is also wearing yellow and black Batman socks. Nobody ever said the Joker wasn't obsessed, did they? 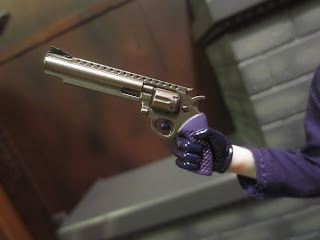 * This is an awesome looking revolver. A beautiful sculpt and some excellent paint work combine to make this one of the best looking accessories in the One:12 Collective range of figures. 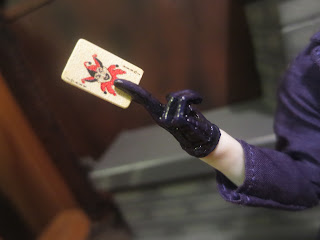 * Another cool extra is the Joker's playing card holding hand. The card is attached to the hand, allowing this to be securely placed on the right wrist peg. This is a cool extra that should fit in well with most displays. 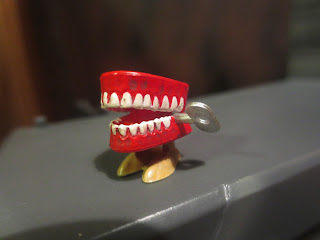 * What's the Joker without a gag item to tote around, right? Mezco gave the figure a little set of windup chattering teeth. They're not articulated but they certainly look nice. I love the large metal windup key and the various scuffs on the gums of the teeth. 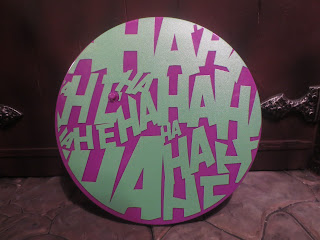 * Like every other One:12 Collective figure, the Joker comes with a personalized display stand. The Joker's is purple with green printed text all over. The peg to hold the figure on the stand is positioned off center to give the figure plenty of room to stand. 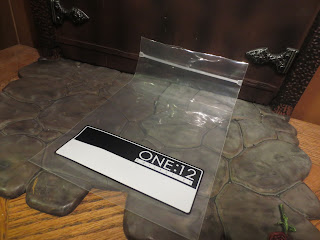 * To keep the extra portrait and hands close by when not in use, Mezco also gives you a cool branded bag. It's just a simple plastic bag with a Ziploc styled closure, but it's appreciated. 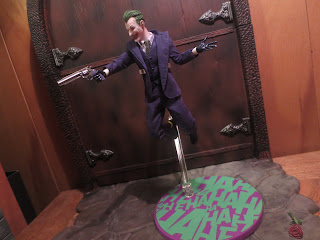 * The Joker also gets the same articulated display arm that most other figures in the line came with, too. It can be inserted into the included display base where the foot peg is (you just have to remove the peg). You can get some great, secure poses here as the joints are very tight on the display bar and it can absolutely support the figure's weight.The Joker's not known for being particularly acrobatic, but it's a nice extra nonetheless. 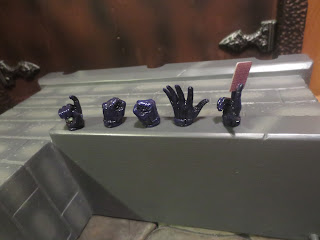 * Here's where my negatives start. First, it's insane to me that the Joker only comes with five hands! Just for figures released recently, the Punisher came with 8, Green Arrow came with 10, and Daredevil came with 12, so the Joker is definitely lacking. What's worse is that he doesn't have matching hands such as a posing right hand. And where's a left handed pistol grip? Without it, there's no way to have him holding his revolver and joker playing card at the same time. It seems odd that Mezco cut back here so heavily. 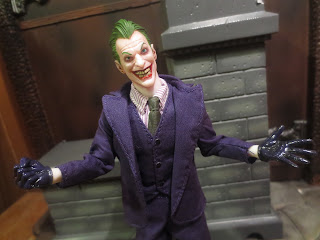 * Considering that the Joker is the same price as Green Arrow and the BvS Batman, he feels really light in the accessories department as well. He really should have come with one or two other items such as a knife, a straight razor, or a crowbar. This is the first One:12 Collective that I've purchased and felt this way about and it's a bit disappointing. 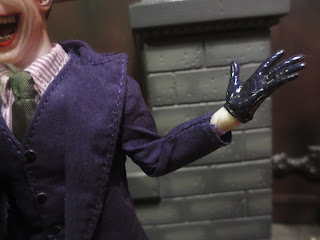 * Articulation wise, I did mention above that the Joker was less articulated than his other One:12 Collective counterparts. Most disappointing is the lack of double jointed elbows and "butterfly" hinged on the shoulders. This means that the Joker, even with his jacket off, can't touch his face or hold up his card closer to his head. 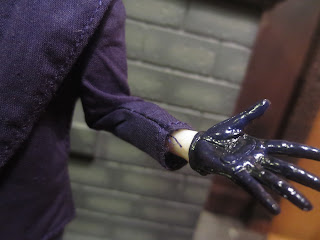 * I've noticed a lot of loose thread on the coat in various places. These can be clipped off rather easily, I'm sure, but it definitely makes the figure look less clean and neat out of the package. 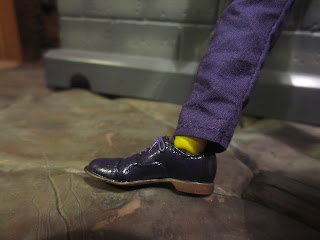 * Last, but not least, are the Joker's ankles. They're true balljoints and while they have a great range of motion, they're really loose. I've had a few instances where the Joker has tipped over on his own. Not something I look forward to in a $75 dollar action figure. 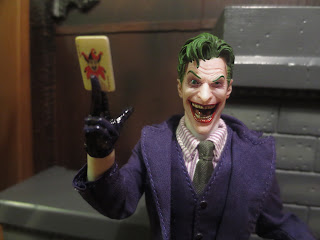 I think the Joker is still a Great figure, but he has some flaws. Considering the other figures in the line, this guy just feels far less accessorized. Consider what Ollie and Batman come with for the same price you might, like me, be wondering if you're missing something. Mezco is making some beautiful figures but when you're asking for $75-$80 a figure, you need to make sure that fans feel they're getting their money's worth. While this Joker has the greatest headsculpt on a Joker figure I've ever seen, I'm still left frustrated by the lack of extra hands or something as simple as a knife. A great accessories make me interested in picking up a figure of a character I'm not a huge fan of, such as the upcoming Shazam, while weaker accessories can make me question picking up a figure. This is still a fantastic Joker figure, but it's a weaker entry in the One:12 Collective line.


Looking for more action figures of the Joker? Then check out the Joker's Gallery, a special place where I've compiled all of my Joker reviews!

For more One:12 Collective reviews, check out the following: